Though Gira means power of speech in Gujarati, Giraben let her work do the speaking – as institution builder, collector, and caretaker of objects, buildings, histories, legacies, and human values for future generations.

Gira Sarabhai (December 11, 1923 - July 15, 2021): a deep appreciation of the layers of history is apparent in the breadth and depth of her lifelong work. Photo: Somnath Bhatt

The passing of Gira Sarabhai, at the age of 98, is an enormous loss not only to her family and friends, but also to the city of Ahmedabad, and our nation. She was the youngest and the last of a generation of Sarabhai siblings – including Vikram Sarabhai and Mridula Sarabhai, among others – who played an outstanding role in the shaping of modern India.

Her father, Ambalal Sarabhai, a pioneer among textile mill owners, was one of the earliest supporters of Mahatma Gandhi when he set up his ashram in Ahmedabad on his return from South Africa. Giraben and her brother Gautam ran Calico Mills and other Sarabhai enterprises, but also founded the Calico Museum of Textiles, a gem among museums anywhere in the world; and the National Institute of Design (NID), the alma mater of so many of India’s artists, designers and creative thinkers of prominence today. 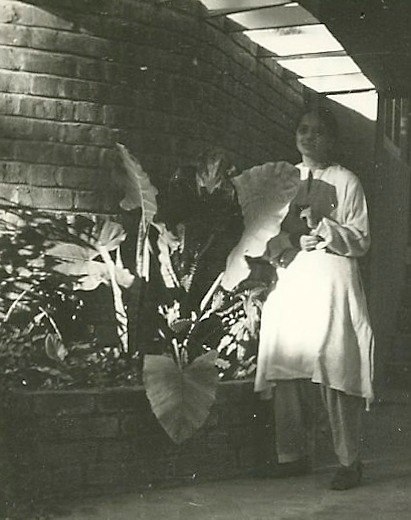 I met Giraben more than two decades ago, at the home of her sister Leena Mangaldas, who told me, “You will enjoy talking to my sister,” and indeed how right she was! Giraben was shy, and somewhat slow to warm up, but we had wonderful talks about the history of Ahmedabad, its architecture, and the city walls, real and imagined. She was curious about a wide range of subjects, and she got to the heart of matter in no time.

As our friendship grew, I saw that Giraben always had several projects on hand – from cataloguing her family archives to documentation and publication of the museum collection; from creating new galleries in the museum to conserving the art, architecture, and the extensive grounds and gardens of Retreat, the family compound.

Giraben worked fast, with efficiency, and with an inordinate attention to detail. Her well-trained team – from Ashokbhai [Ashok Mehta] to Paulomi Shah, and from Nigar to Kamleshbhai – knew her exacting standards and worked hard to meet them. Every time we met, she told me of her progress, her next project, sometimes seeking advice or affirmation, and she did not hesitate to rope me in at every turn.

I was honoured, but I never worked for her. We were friends, confidantes, and at times sounding boards to each other. I was some 40 years her junior, but the age difference just strengthened our bond. She delighted in knowing the latest in radical forms of creativity in unfamiliar fields from all corners of the world— from Maluku islands in Indonesia to Urk island in the Netherlands, from art by artificial intelligence to art by protesting citizens—that I could sometimes bring her. But mostly, I was the beneficiary of her love, guidance, and oceanic generosity in sharing her knowledge, in this relationship.

We worked on a number of projects together, including an exhibition on Anasuyaben Sarabhai, the founder of the Textile Labour Association, who was the elder sister of her father, with whom Giraben enjoyed a special life-long bond. The exhibition was held in the same stately, turn-of-the-century home named Shanti Sadan where Ambalal and Anasuyaben lived. What was special about the venue was that this is where Anasuyaben and Mahatma Gandhi met the textile workers and planned the 1917 strike against the mill-owners, who were represented by none other than her brother Ambalal Sarabhai.

Bringing the past to life, layering history upon history, weaving the family story with that of the city, of the industrialist with that of his workers, and trying to understand the force of non-violence excited and energised us. 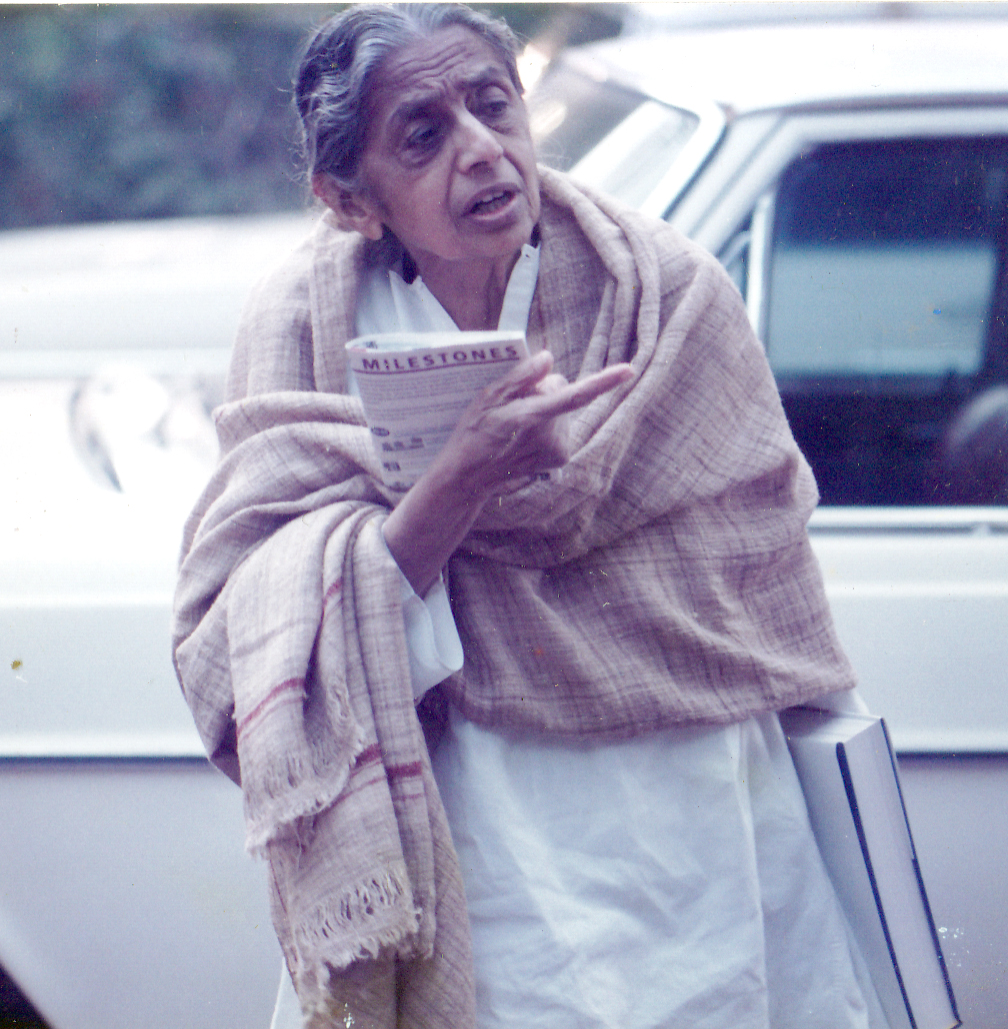 I was fortunate to see her unique ways in action. In the process of renovating the historic building, she painted the colours used in the project on sample colour planks and stored them in the basement so that future generations could arrive at a precise colour match! Such attention to detail permeated every aspect of her life and work.

In that sense, Giraben was a consummate curator as in a caretaker – of objects and artefacts, buildings, histories, legacies, and human values. She documented and archived everything with a strong sense of responsibility towards future generations. She loved her family dearly, especially her parents and siblings, and she made sure each life was richly recorded in the family archives.

As a collector, she and her brother Gautam built an outstanding collection of historic textiles at a time when textiles were neglected, considered lesser works of art. To her, the long history of Gujarat is richly reflected in its textile production and trade.

Similarly, the art and architecture of Ahmedabad reflects a multicultural confluence of elements from India, West Asia, and Southeast Asia. Giraben found the maps of Ahmedabad city fascinating, and loved the ways in which foreign design elements were indigenised. Cross-cultural influences always fascinated her.

Her deep appreciation of history is apparent in the breadth and depth of her collection.  She knew her objects well – not just where and when each one was made, but the how of its making, often in great technical detail. She had great respect for the skill and ingenuity of craftspersons and it showed in her recognition of and respect towards the skilled people, great and small, who surrounded her.

Giraben’s friends and colleagues included eminent architects, artists and designers like Le Corbusier, Alexander Calder, Charles and Ray Eames, George Nakashima, and scholars like John Irwin and R. Nagaswamy, to name just a few. She introduced India to a breathtaking range of modern and post-modern artists and designers, but even more importantly, she introduced India to them in all its richness. 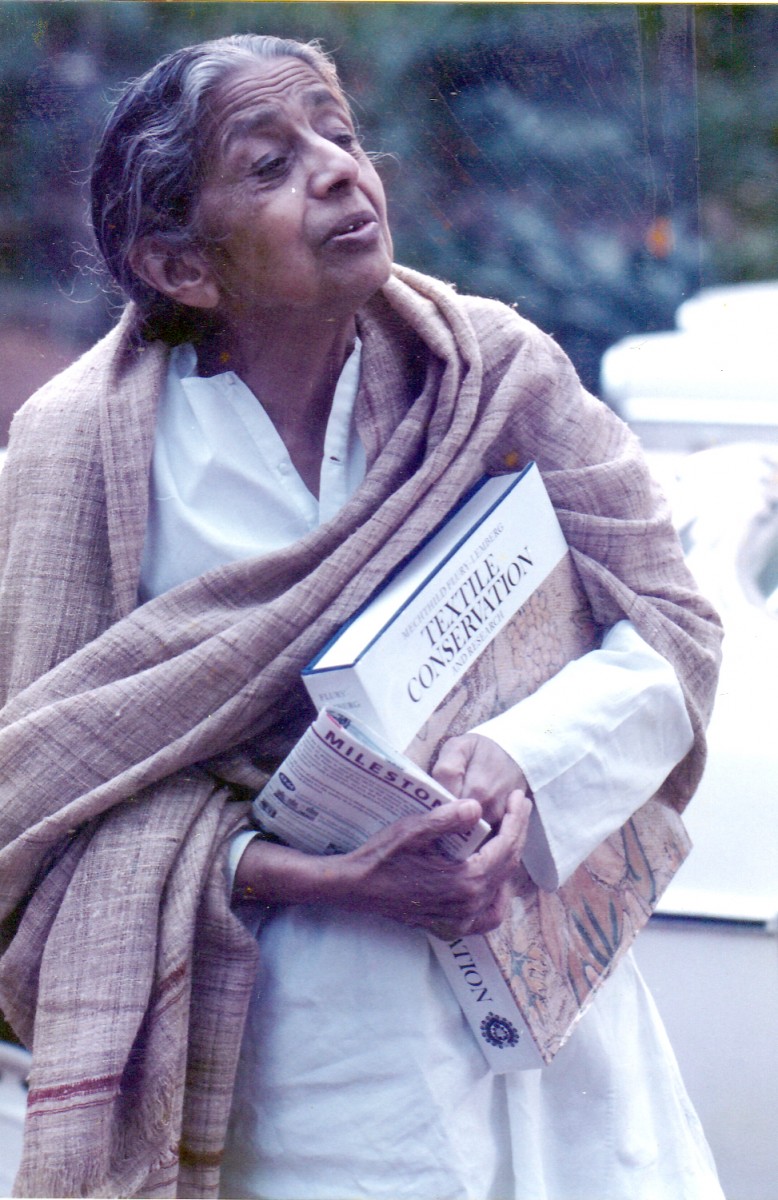 Gira Sarabhai, along with her brother Gautam, built an outstanding collection of historic textiles at a time when textiles were neglected. Photo: Sadanand Menon

In her later years, when I knew her, she worked with Rahul Jain, Anne Morrell, and Tarlaben Dhundh on the textile collection; with Nobuko Kajitani, and Ben Ormerod on textile conservation and lighting design, respectively, and with Cornelia Vogelsanger, who was setting up a new Buddhist gallery. Vogelsanger, pre-eminent art historian B. N. Goswamy, and the late historian Aparna Basu were not just long-standing colleagues but true and trusted friends.

A well-known recluse, Giraben rarely met people with whom she had no work, no matter if they were heads of state or celebrities, because she had no appetite for formal talk or informal chitchat with strangers. Though Gira means power of speech in Gujarati language, she let her work do the speaking. She listened to silence, like her friend John Cage, with even more attention. Awards and honours never interested nor impressed her. She kept her immediate world small, but she inhabited it fully and deliberately.

Giraben guarded the museum and its collections fiercely. Many a scholar was turned away in disappointment. To her, sharing her family collection could only happen on her terms. Giraben was not always easy to work with; she could be demanding, distrustful, and have sudden changes of heart. But I never experienced this side of her. She worked very hard herself and honestly protected the trust we put in her. Her meticulousness to the last millimetre, annoying as it could be at times, upheld the high standards that graced all aspects of her life—from the coconut water in a clear glass at the end of every meeting to the Nakashima chairs with their deesa print seat cushions we sat on, or the fragrant garland of tiny brown borsali flowers on a white marble round plate she sent over on every birthday.

She maintained, art and architecture start not with drawings and design, but with knowing how we want to live. Her two homes, one in the city and the other on the bank of the Sabarmati River, are matchless examples of this. I remember the time when my son, then six, saw the home on the riverbank, named Bagh Madhubani one late January morning and exclaimed “Father, tell me, is this heaven?” 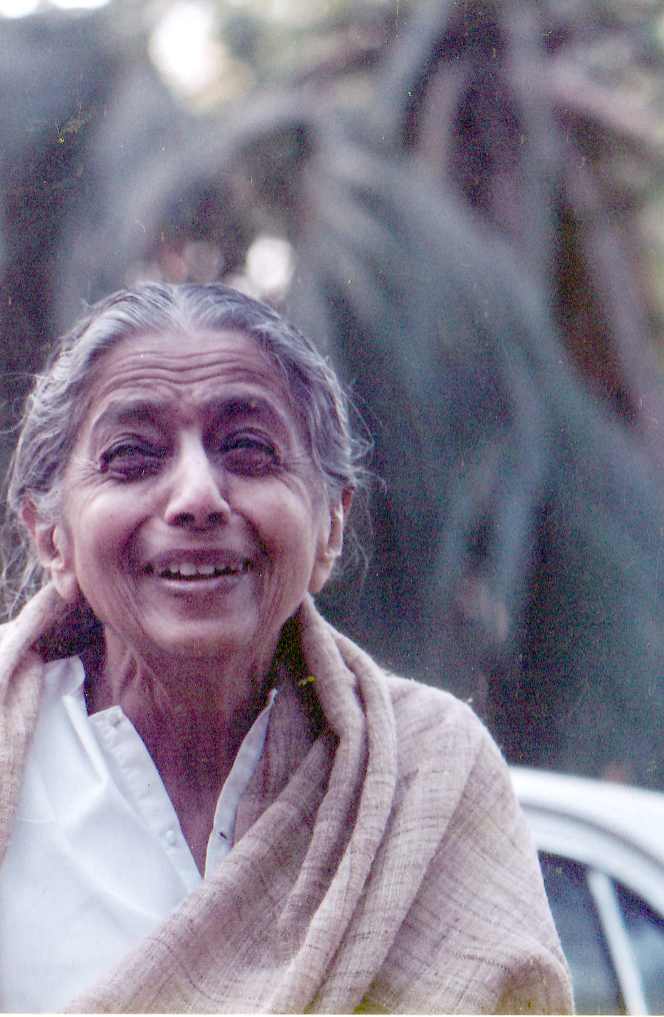 A rare picture of Gira Sarabhai smiling (1998, at the Sarabhai Foundation in Ahmedabad), for once looking into the camera. Photo: Sadanand Menon

To me, Giraben was an individual, an institution, and an enabling environment. Up until the start of the pandemic, she called me every morning at 8:00. We talked of everything that was important to her work and plans—the latest news; Hans Hofmann’s colour theory; ardusi plants, Chola bronzes, my family, her family; pujas and her distaste for them; the upanayana ritual and my joy in it; the mutual influence of Indo-Chinese or Indo-European or Indo-Ottoman art; Ahmedabad in transition; the future of museums; debates around modern and post-modern art and architecture; or the depiction of Yama in stone temples across Asia.

The range of her knowledge and the depth of her insight was staggering, and humbling, as if of the size of a continent, and therefore, any exploration with her opened one’s eyes to the world outside and inside. At the end of the call, she would assign a task to me and to herself for the day that emerged from the conversation.

A year ago, she spent weeks poring over the World Atlas of 1920. When asked why she was wasting time over an outdated map, she said, “Nothing gets outdated except our views and understanding.” I will miss her dry wit and sly humour, her warmth, her curiosity, and her generosity.

Every wedding anniversary, my wife and I would visit her to seek her blessings, and she would always say that she didn’t do blessings, but greeted us with well-wishes all the same. The day before she passed away, knowing how frail she was, I asked if she was up to seeing us, and she said she wanted us to come. This time she blessed me, her hand in my hands. The next day, she died peacefully; her breath ceased and then her heart. Her beloved niece Pallavi and Pallavi’s son Ajay were by her side.

Giraben had left clear instructions about how her remains were to be handled, and who should do what. As usual, she had thought of every detail that mattered to her. Meticulous and deliberate to the end.