The love of Garcia Marquez’s life and his partner, passed away in Mexico City on August 15, at the age of 87, six years after her husband died.

The year 1967 was Gabriel Garcia Marquez’s annus mirabilis. The year made him an international celebrity, and changed the course of fiction writing forever in the West. Behind the miracle lay the magic of Gabo’s storytelling and the realism of a woman running a home – Mercedes.

Mercedes Barcha Pardo, the love of Garcia Marquez’s life and his partner for 56 years, passed away in Mexico City on Saturday, August 15, at the age of 87, six years after her husband died. Announcing the news on Twitter, Mexico City mayor Claudia Sheinbaum described her as a “great conversationalist, cheerful, critical, cultured, infallible in her opinions”. She is survived by her two sons, Gonzalo and Rodrigo Garcia Barcha.

Marquez wrote four books before One Hundred Years of Solitude. They had initially sold 2,500 copies in total. He was a struggling writer by the mid-1960s. Then one day in 1965, on a road trip from Mexico City to Acapulco with Mercedes in the family’s white Opel, the entire first chapter of the novel, including the famed first sentence, appeared to him, and Marquez felt he was ready to write the novel he had been planning since he was 18. He would say later that if he had a tape-recorder, he could dictate the entire first chapter right then. Instead of going to Acapulco, he decided to turn around and surrender himself to the task. Deciding to isolate himself with a typewriter in a room of his own, he asked Mercedes not to interrupt him, particularly for money, come what may.

Gabo and Marcedes’s home in Fuego Street in Mexico City had a wooden study where the writer confined himself. Outside, it was a bustling Caribbean town; Inside, it was a world infested with scorpions and yellow butterflies. He smoked 60 cigarettes a day and worked obsessively as he created Macondo and its unforgettable inhabitants, the Buendias, the Moscotes and Melquiades. It was an excruciating as well as ecstatic journey. He was at his desk for eighteen months, just working on his book.

Like Ursula in the novel, Mercedes looked after the children and managed the home. She brought him sheets of paper and his scotch. She dealt with the outside world and took care of the finances. Marquez’s biographer Gerald Martin informs us that she pawned the telephone, the fridge, the radio, her jewellery, and finally sold off their four-wheeler. She persuaded their landlord to forego their rent for seven months and borrowed money from her friend Mutis and others. The day Gabo wrote the portion where Colonel Aureliano Beundia dies, he got up and went upstairs to Marcedes’ room on the second floor. He lay beside her and wept for two hours. She knew what had happened when she saw his face. “The colonel’s dead!” she said. 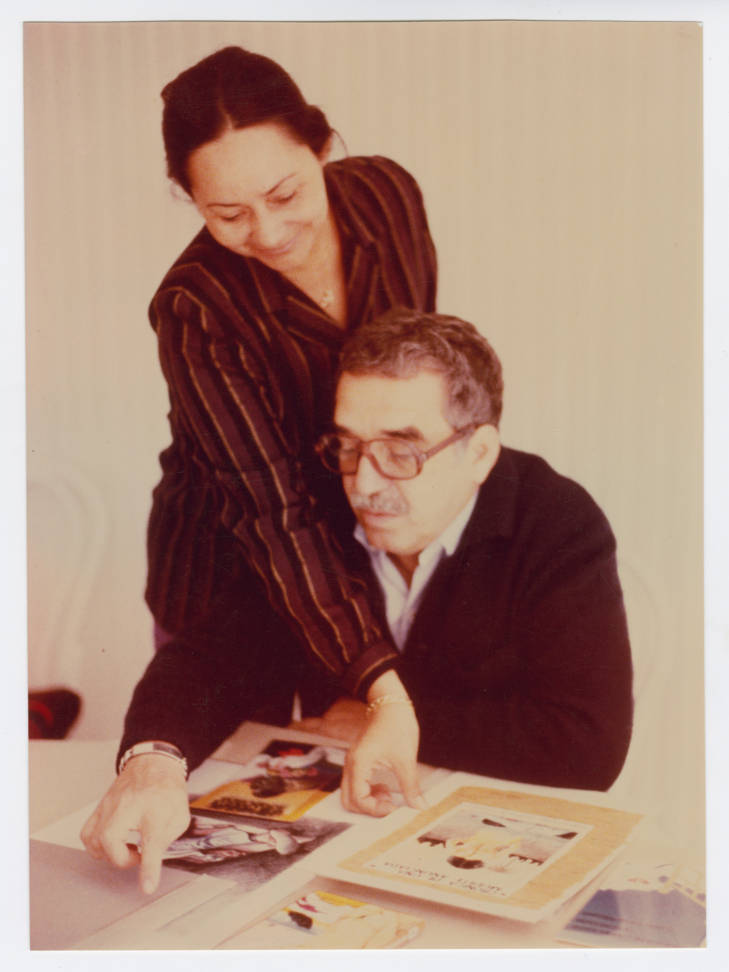 Many years later, as he received the Nobel Prize at the Stockholm Concert Hall, dressed in a white liqui liqui, Gabriel Garcia Marquez was to remember that distant afternoon when his wife took him to the post office to mail the manuscript of One Hundred Years of Solitude to a publisher in Argentina. Reaching the counter, they realised they did not have the 160 pesos required for postage. So they sent only half of it.

The publisher, Francisco Porrúa Fernández of Editorial Sudamericana, was so eager to read the book that he sent them money to mail him the rest of it. In interview after interview, Marquez would credit Mercedes for making it possible for him to forget all worries in the world and write. It was she who convinced Gabo that writing was his true calling.

The eldest daughter of a pharmacist from Magangué on the banks of river Magdalena, Mercedes met Gabo for the first time in the coastal town of Sucre when she was nine. Their fathers had been childhood friends. Her paternal grandfather was from Egypt. In the following years, they met only sporadically but exchanged letters regularly, often from one continent to another. He proposed marriage in one of those letters. Seventeen years after their first meeting, when they got married in Baranquilla, they knew little of each other face to face; but a lot, by correspondence. They settled in Caracas immediately after marriage, where Gabo worked for a magazine. The same year Marquez published No One Writes to the Colonel. Their first son, Rodrigo, was born in 1959.

For the next half a decade, she was by his side wherever he lived, In Mexico City, Bogota, New York or in Barcelona. Gonzalo was born in 1962. They shared their moments of solitude together; solitude, that Marquez often said, was brought by fame. It was befitting that he dedicated the most romantic novel he ever wrote, Love in the Time of Cholera, to her. In a widely read interview to journalist Plinio Apuleyo Mendoza, Marquez said, “We are now about to be married for 25 years, and at no point have we had a serious controversy. I think the secret is that we have continued to understand things as we understood them before we were married.”

Also read: The Public and Private Faces of the Friendship Between Fidel Castro and Gabriel Garcia Marquez

As is to be expected from Gabo, Mercedes’ presence penetrated his literary world. Mercedes is the name of a character in One Hundred Years of Solitude. The author describes the girl, who is a pharmacist’s daughter, as having ‘the stealthy beauty of the Nile, thin neck and sleepy eyes’. In the novel, she is the fiancée of Gabriel Márquez, the one who lives to tell the tale.

Which one among Gabo’s novels was her most favourite? She was asked in 2010. “One Hundred Years of Solitude. Isn’t it? I have read it three times. It is a wonder. That chapter of the rain and the plague! That Ursula! Poor Ursula is wonderful! It’s just like a torrent! You go through the chapters and don’t realise it,” she said, adding, it was wonderful that as a reader she could live with the author for a lifetime.

After Marquez’s death in 2014, Mercedes devoted herself to managing the Gabriel Garcia Marquez Foundation in Cartagena as its President Emerita. The organisation was set up as Foundation for a New Ibero-American Journalism in 1994 by Marquez himself to promote and teach ‘independent journalism that seeks to investigate, decipher and explain reality in a rigorous, ethical and creative way’. She created the Gabo Center in 2017 as an initiative to promote García Marquez’s legacy in all its personal and professional dimensions. Those who knew her often mentioned that despite living away from her country, she was forever a Colombian at heart, and epitomised Caribbean grace in her manners till the last day of her life.