Editorial: Gauri Lankesh's Murder Is a Chilling Message to All Dissenters

Our response should not be to desist from speaking one’s mind but the exact opposite – Gauri Lankesh would have done that and we owe it to her to continue the fine tradition. 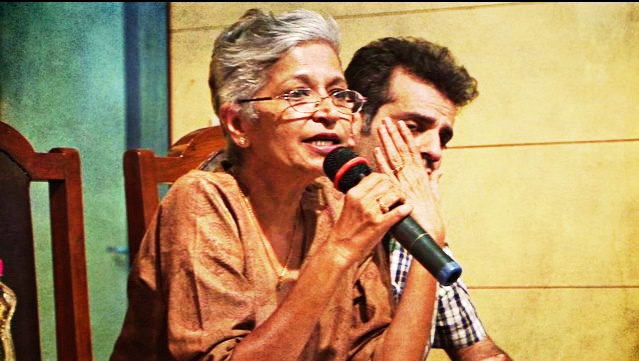 The dharma of a journalist is to ask difficult questions, hold the establishment to account and stand up for the dispossessed and the voiceless. Gauri Lankesh was acutely conscious of that. Throughout her journalistic career, she stood up for those values, fighting not just corruption but also bigotry and the purveyors of communal hatred. She was threatened, sued and finally, when she refused to be silenced, killed in cold blood.

The identity of her killers is not known, but her brutal murder by gunmen who shot her outside her home must be seen in the backdrop of the rising violence against dissenters and rationalists and those who have consistently spoken out against the forces of sectarianism and hatred. A climate of intolerance has built up, fuelled by politicians and sundry extremist organisations who operate in the name of religion; sadly, sections of the big media have played a dangerously complicit role in fostering this climate.

Over the past four years, leading thinkers Narendra Dhabolkar, Govind Pansare and M.M. Kalburgi were gunned down for raising their voices against communalism and superstition. The role of militant Hindutva organisations is suspected but the police in Maharastra and Karnataka do not appear to be treating these cases with any sense of urgency. The modus operandi of the killers in Lankesh’s murder appear similar. A proper investigation will be required to pinpoint who killed her – and more importantly who got her killed – but it is impossible to ignore the context.

Just about a year ago, she was sentenced to six months in jail after being convicted of defamation in cases filed by two BJP leaders in Karnataka. Though she was released on bail, the sentence was hanging over her head. The conviction prompted no less a person that the BJP’s IT cell to publicly issue a veiled warning to journalists at large.

Journalists in India have long valued their independence, but of late, that one-time feistiness has morphed into a coziness with the powers that be. Some journalists are blatant about their support for the government, others, while pretending neutrality and equidistance, are more subtle. Either way, the space for independent journalism – which does its job without fear or favour and seeks to serve only the reader/viewer – is rapidly shrinking. How dangerous the profession is can be gauged from the fact that five journalists were killed in India in 2016; the same year, India dropped three places to 136 in the global Freedom of the Press index.

A brazen killing such as this one seeks to send out a chilling message to not just journalists but to all independent thinkers and dissenters – that this could be their fate too. The only proper response should be to do the exact opposite of what the killers want – to continue standing up to those who are out to spread terror and silence all opposition. Intolerance of this kind has to be resisted and exposed. Gauri Lankesh would have done that and we owe it to her to continue the fine tradition.