Though not a recognised ‘architect’, Contractor left behind a strong legacy of sustainable development. 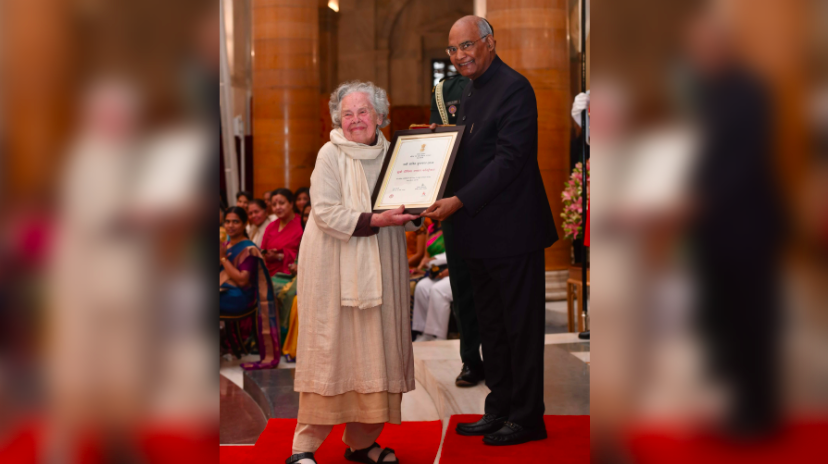 I first met Didi in May 2011 after making the nearly 2,000-km journey from suburban Mumbai to the Kangra valley of Himachal Pradesh, after the completion of my architecture degree. What began as a short summer jaunt to the Himalayas slowly transformed into a three-year long apprenticeship.

During this time, I lived and worked with her on several mud-building projects in the region. Didi’s critical regionalist interpretation of Kangra’s vernacular mud architecture was lauded the world over for being a model of responsible architectural practice in the age of global climate change. She was also feted by the President of India for her distinct contributions to the country’s sustainable building movement with the 2018 Nari Shakti Puraskar.

Yet, despite recent recognitions, not many Indians are familiar with Didi Contractor’s pioneering work beyond a small community of thoughtful architectural practitioners.

Born as Delia Kinzinger on October 12, 1929 in pre-World War II USA, Didi was raised in a household infused with heady ideas of art and culture. Her expressionist painter-parents were associated with the German Bauhaus movement.

Young Delia grew up in and around inspiring discussions about painting, sculpture, literature, and architecture in the stunning high desert landscapes of Texas and New Mexico. She was deeply influenced by the region’s pueblo adobe (sun-dried mud brick) houses as well as the work of famous American architect Frank Lloyd Wright, whom she first heard in person as an adolescent.

Years later as an art student at the University of Colorado-Boulder, she met her late husband, Narayan Ramji Contractor, a civil engineer from erstwhile Bombay. Love blossomed and Delia moved halfway across the earth to play the role of a doting wife in newly independent India, residing first in Nashik and later in Juhu. She played it to perfection too, raising four children, one of whom is the renowned cultural anthropologist, Kirin Narayan and another, the award-winning USA-based architect, Devendra Narayan Contractor.

In the passing away of Didi Contractor , a remarkable human being , a wonderful designer, a storehouse of knowledge and somebody in love with India has gone. Go well into the great beyond Didi. Her earth and slate architecture was stunning and intuitive. pic.twitter.com/PT1eVhD6De

This was also when Didi had her first tryst with India’s rich craft and building traditions. She designed a small cottage for actor and friend Prithviraj Kapoor which later became Bombay’s avant-garde Prithvi Theatre. The Maharana of Mewar also commissioned her to repurpose the interiors of the Jag Niwas Palace into Udaipur’s first luxury hotel, The Lake Palace.

A series of personal circumstances then triggered her move to Kangra in the 1970s. Little did Didi know that her architectural journey had only just begun.

What started as an environmentally conscious endeavour to make smokeless mud stoves and solar cookers in the artist commune of Andretta led to the construction of her first mud building in the 1990s, her own home in Sidhbari. Faced with budgetary constraints and the challenges of constructing on a contoured site, Didi expressed her artistic impulses by using locally sourced kuccha materials, like mud, slate, bamboo, wood, and stone.

Not only did this keep construction costs in check, but also significantly reduced the building’s embodied energy, thus making a bold statement against society’s ecologically careless ways. But unlike traditional mud houses, hers was designed for a modern life. Gone were the dingy dark rooms and fraying mud plasters that invited stigma to vernacular buildings. Instead, her designs incorporated expansive window frames and brightly lit roof skylights supported by reinforced cement concrete (RCC) lintel bands that distributed masonry loads and illuminated house interiors. She also experimented with different proportions of shredded wastepaper, cow dung, and adhesive mixes for wall plasters because these hybrid plasters weathered slower than traditional ones, thus requiring lesser maintenance.

On construction sites, she also routinely instructed erring masons and inexperienced interns by saying, “Cement is like masala, you need to use it judiciously in a building otherwise, like overly spiced food, the building becomes unpalatable.” In other words, Didi was not a naïve romantic, but a pragmatist. While she believed in the timeless qualities of vernacular architecture, she also believed that these building traditions were not static but were always changing.

When most people considered retiring at 60, Didi began her architectural career with a childlike enthusiasm that belied her greying hair and slowing metabolism. She was a stickler for details, consistently awaking at five every morning to pore over new design ideas, thus displaying energy levels that put her interns (most who were a quarter of her age) to shame.

Famously arriving on construction sites on horseback, she made it a habit of laying the first line of bricks herself, thereby emphasising her hands-on work ethic. People began to gradually take notice of her unique work and commissioned her for more architectural projects. 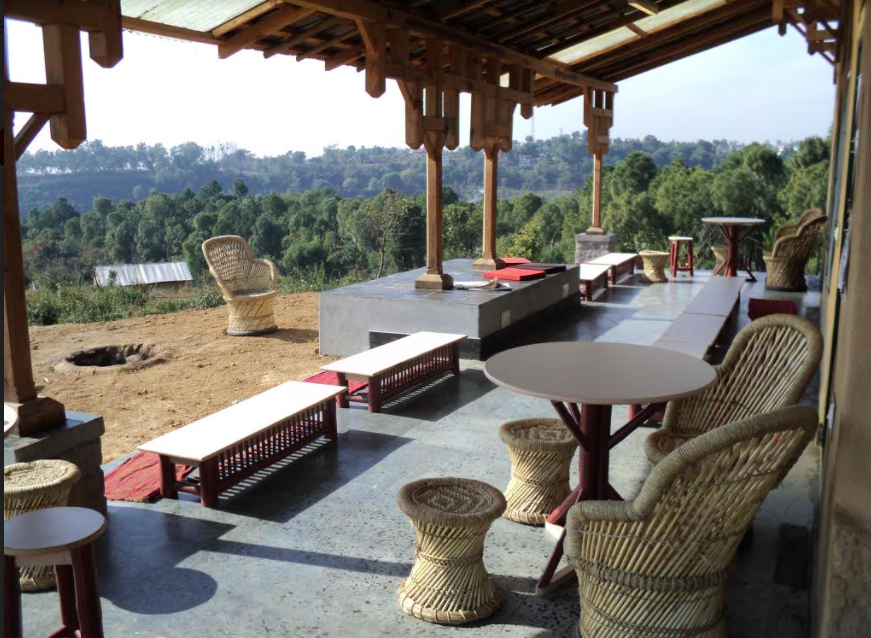 Over a period of nearly 30 years, Didi designed and constructed dozens of mud buildings in Kangra, trained and empowered numerous local craftspeople, and imparted her knowledge to hundreds of architecture students from across the country. Some of her most prominent buildings include the Dharmalaya Institute for Compassionate Living in Bir for eco-social entrepreneur Mark Moore and the Sambhaavnaa Institute of Public Policy and Politics in Kandbari for public interest lawyer Prashant Bhushan. These empathetically designed institutional spaces will continue to inspire critical thinking about important social, economic, and environmental issues in India.

Aesthetic and design considerations were paramount for Didi. While driving to site visits in Kangra, she often observed the changing landscape and lamented the “ugliness” of India’s rapidly developing cities. Yet, Didi also believed that architecture and design could not be practiced in a vacuum. Every design detail had deeper social and economic implications.

Also read: The Council of Architecture Needs to Honour its Commitment to the Profession

For instance, she frequently extolled the virtues of “handmade” building elements for their earthy and natural aesthetics (which are in vogue these days), but more so for its impact on the livelihoods of traditional craftspeople. Mud buildings are very labor intensive. Each section of a mud wall employed several labourers, from those who dug-up and mixed earth with water and husk, to those who made mud bricks and dried them in the sun, to those who laid bricks to build mud walls, and finally to those who plastered mud walls.

Therefore, she argued that an architect’s decision to use an industrially manufactured pucca material, like cement, steel, aluminium, or chemical paint, not only increased the building’s carbon footprint but also funnelled scarce monetary resources away from local economies into the pockets of transnational capitalists. In this regard, Didi belonged to a rare breed of rebel architects from the Global South, which included Kerala’s Laurie Baker, Bombay’s Nari Gandhi, Egypt’s Hassan Fathy, Iran’s Nader Khalili, and Pakistan’s Yasmeen Lari, who used architecture as a political tool to make subtle statements against the big forces of capital. 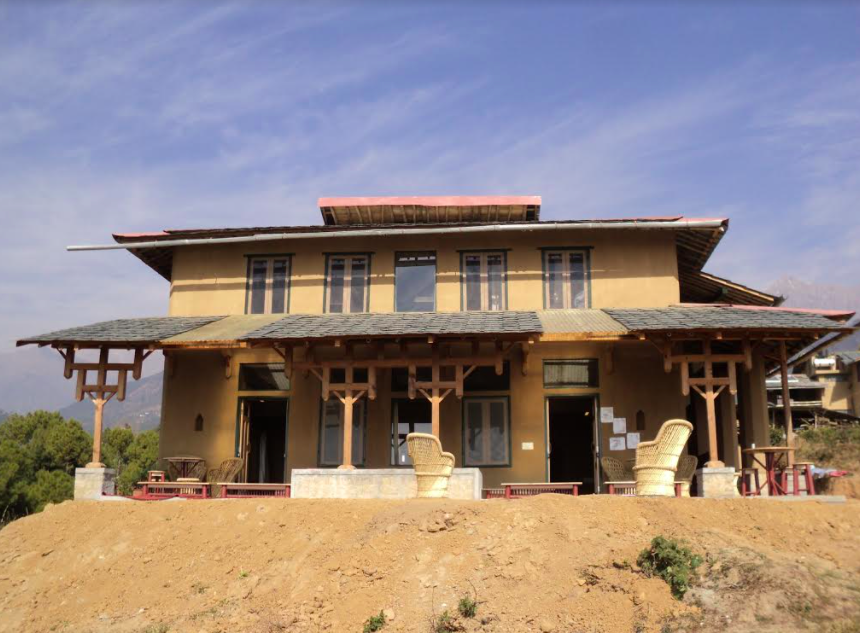 Ironically, India’s Council of Architecture did not recognise Didi as an “architect” due to its parochial certification processes.

This was a blessing in disguise. For, it was best that her image was not sullied by associating with a profession whose positive impact on India’s built environment is meagre. It was also best that she was not implicated in the recent proliferation of for-profit architectural colleges that are producing a dime a dozen glorified drafts (wo)men for India’s booming construction industry.

It is best that she wasn’t involved with a profession whose prominent members are complicit in promoting grotesque authoritarian state projects, like New Delhi’s Central Vista Redevelopment Project. In this context, it is not surprising that Didi Contractor remained an enigma known only to a handful of people in the alternative development circuit. But this is not a reflection of her value or effort because Didi steadfastly championed the cause of sustainable design until her very last breath. She now leaves the proverbial ball in the court of the next generation of architects and critical thinkers of the built environment.

Also read: Ripping Apart the Central Vista Is Nothing Short of the Reconquest of Delhi

She always dressed in a khadi kurta and dupatta, wore a dusty hat on sites and carried not just a sketch book and pencils, but also a water bottle, and a flask of freshly brewed black coffee. Dark chocolate was her guilty pleasure, which she secretly devoured away from the prying eyes of interns, lest she’d have to share. When not designing, Didi passionately tended to her vegetable patch, her compost heap, and the landscaped gardens around her house. She shared her humble abode with a dog, a cat and a parrot who went by Meetu, all of whom, I’m sure, are already missing her generosity, warmth, and affection.

For me, these mundane moments are memories I cherish, because in these very moments of everyday life, she displayed an honest attempt at critical praxis, an attempt to live by one’s values without pretence and with minimal compromise. And she did this with a gentle smile on her face.

Siddharth Menon is a PhD Candidate in the Department of Geography at University of Wisconsin-Madison, USA. Between 2011 and 2014, he assisted Didi Contractor with the construction of the Sambhaavnaa Institute of Public Policy and Politics in Palampur, Himachal Pradesh.