The Dalai Lama’s visit to the Tawang monastery is significant given that the abbot he appointed stepped down last May after finding himself at the centre of an anti-dam protest in which two people were killed in police firing. 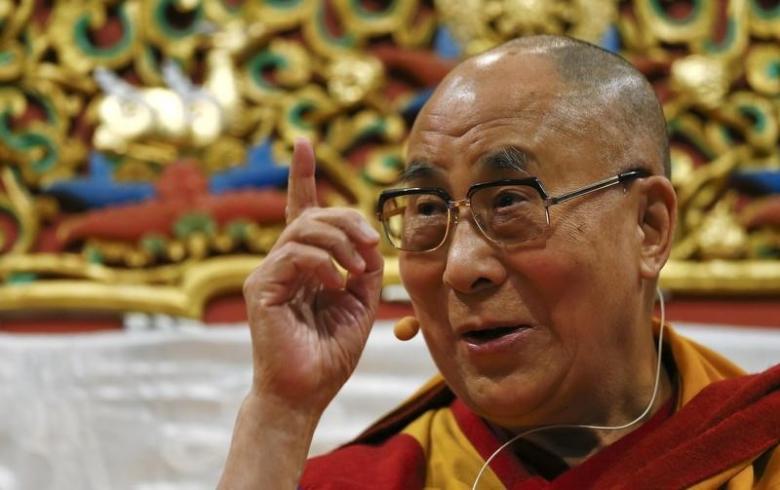 The Dalai Lama gestures during a public talk. Credit:Reuters/Files

New Delhi: After a gap of eight years, the Dalai Lama embarks on a nine-day visit to Arunachal Pradesh from April 4.

The national media is only looking at his visit in terms of the angry response it has already brought from China. The Indian government granted the Dalai Lama permission to visit Tawang, a town that has been claimed by China. However, there is an angle to this visit that is quite unconnected to India and China’s territorial anxieties, even if the wider resonances for Tibetan Buddhism help explain Beijing’s strident objections to this, his fifth visit to Arunachal Pradesh.

Many in the northeastern state are looking at the Dalai Lama’s visit as a likely attempt by Dharamshala to firmly put in place the influence of the Tawang monastery abbot over the people of the town and thereby all followers of Tibetan Buddhism across the state.

According to some, the visit is also important when seen from the angle of reinforcing the primacy of the Gelugpa sect over all the branches of Tibetan Buddhism.

Though the Dalai Lama is considered an important figure across the four sects of Tibetan Buddhism, he belongs to the Gelugpa lineage which has an upper hand in Arunachal because the Gelugpa sect controls the Tawang monastery. 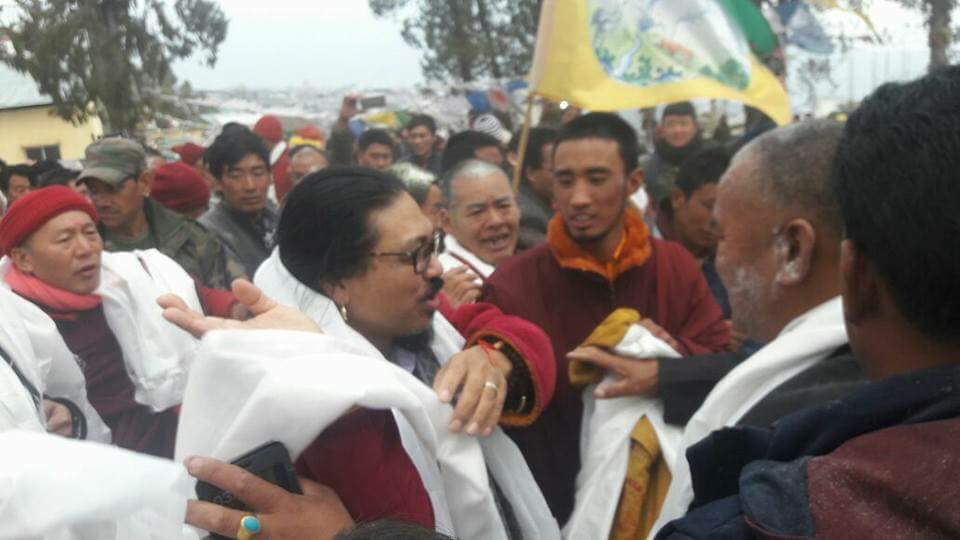 Called Galden Namgey Lhatse, the Tawang monastery is the largest in India, second only to the world’s largest – the Potala Palace in Tibet, which is, of course, out of bounds for the Dalai Lama.

In March 1959, after the Dalai Lama fled Tibet, it was in this monastery that he found shelter for some days before he reached Tezpur in Assam.

In this visit, the Dalai Lama was to stay first at the Tawang monastery, though inclement weather conditions forced him to abandon a chopper ride for a road trip from Guwahati to the TGL monastery in Bomdila. He will now be in Tawang for three days – from April 8 to April 10 – as per an announcement made on his official website on April 4 morning.

Being the head of the Gelugpa sect, the Dalai Lama appoints the abbot of the Tawang monastery. On June 6, 2008, as per practice, he appointed a new abbot, picking Guru Tulku Rinpoche from the TGL Monastery in Bomdila, situated about 65 kms from Tawang town.

However, for the first time in the monastery’s history, in May last year, Guru Rinpoche sent his resignation to the office of the Dalai Lama following public unrest in Tawang. The spiritual leader found himself at the centre of a violent anti-dam protest that led to the killing of two people, one of them a monk of the monastery, in police firing. The firing also injured 10 others and hit the headlines not just in the state but outside it too.

The dead and the injured were part of a crowd of about 200 people who assembled outside the Tawang police station on May 2, 2016, to demand the release of Lama Lobsang Gyatso, a monk who belonged to the monastery. He was arrested on the basis of an FIR lodged by the chairman of the local district council for purportedly “questioning” Guru Rinpoche’s authority in a video clip.

Lama Lobsang also heads the Save Mon Region Federation (SMRF), a powerful group that has been spearheading protests since 2011 against the large hydel projects coming up in the ecologically sensitive region. The SMRF enjoys the active support of many monks from the Tawang monastery besides student bodies, local people and also the heads of some other sects of Tibetan Buddhism. In April 2016, it also succeeded in getting a favourable order from the National Green Tribunal (NGT), which suspended the environmental clearance of the 780 MW Nyamjang Chhu hydel project coming up in the Mon region.

“Taking an anti-dam stand in Tawang also meant he was taking on the most powerful political family in town – the family of present chief minister Pema Khandu. The Khandu family has considerable interest in the hydel projects of Tawang and elsewhere. All the three MLAs of Tawang are from the family. The NGT order particularly alarmed the pro-hydel project lobby. At the time of the police firing, Pema Khandu was a minister in the Kalikho Pul government,” said a senior reporter in Itanagar who preferred to remain anonymous.

Two days before his  arrest, which led to the police firing, Lama Lobsang was reportedly detained on the basis of an FIR filed by the security officer of Pema Khandu, alleging that he disturbed the peace by leading a team of villagers to the site of the under construction Mukto Shakangchu hydel project. He was later released.

“Lama Lobsang is considered to be the one taking over the anti-dam stand of the venerable monk Tsona Gontse Rincpoche (TSR) after his death under mysterious circumstances in Delhi in 2014. TSR dabbled in electoral politics but couldn’t make progress because of Pema Khandu’s father and former Arunachal chief minister Dorjee Khandu. Lama Lobsang was one of the many young monks that TSR sourced from the Sera Jey Monastic University in Mysore for his anti-dam stand that he made poll issues,” said Jarpum Gamlin, editor of Eastern Sentinel.

In a May 20 article in The Hindu BusinessLine, Gamlin – also the general secretary of the state unit of BJP of which Pema is now the chief minister – wrote, “The large presence of Gelukpa monks in that emotive, yet unruly May 2 protest, could be construed as a rebellion within the monastery, as also an attempt to undermine the Dalai Lama, as the abbot is directly appointed by him. Such a construct is not unfounded, given the threat perception to the life of Guru Rinpoche, who is camping at Dharamshala. Sensing danger, he had earlier moved out of Tawang monastery to take shelter at an Indian army guesthouse. A day later, he left for Bomdila but the local administration expressed its inability to provide security.”

He added, “Amid the hullabaloo, word is out that three of the five secretaries at Tawang monastery are seeking the ouster of Guru Rinpoche…it is alleged that the rebel monks have been aiding Lama Lobsang’s campaign against the political and religious establishments.”

Lama Lobsang, however, maintained that he was a part of “a conspiracy” hatched to arrest him by using the video clip which was shot in 2012. In that clip, he asked Guru Rinpoche to stay away from the anti-dam protests as he belonged to Bhutan.

“The case is in the court, so I don’t want to say much but the attempt then was to clearly put me against the abbot of the monastery, who is a revered figure, by some people with vested interest, and thereby take away the people from the movement which otherwise has a lot of public support. They circulated the video clip shot in 2012 where, in response to an order passed by the abbot then asking the monks to stay away from the anti-dam protests, I said he should stay away from it as he doesn’t belong to the region. I said it is an issue of the indigenous people of Tawang,” Lama Lobsang told The Wire on April 3.

According to Nani Bath, professor of political science at the Rajiv Gandhi University in Itanagar, “A lot of people believed that the Khandu family was close to the Dalai Lama’s office and thereby Guru Rinpoche. I got that feeling during the visits I made to Tawang then.”

Though the Union minister of state for home Kiren Rijiju, also an MP from Arunachal, told reporters in New Delhi on April 3 that the Dalai Lama’s visit “is purely religious,” it was Pema, the state’s political leader, who went to invite the religious leader to visit Arunachal “on behalf of the people of the state”.

Upset by the developments leading to Guru Rinpoche’s resignation, the Dalai Lama, however, recused himself from appointing a new abbot. He stated in a letter to the monastery, “If there are people who are not satisfied with the abbot’s activities, then I shall no longer appoint the abbot to Tawang monastery. Instead, the abbot will be directly appointed by the Sera Je monastery.”

But two months ago, the Dalai Lama named a new abbot for the Tawang monastery from the Drepung Loseling monastery in Karnataka. The new abbot will now receive him in Tawang on April 8.

“It is in this context that the Dalai Lama’s visit is extremely significant. That is why he is also visiting all the important monasteries in the Bomdila and Dirang region,” Gamlin told this correspondent.

Nani Bath, however, does not see last year’s public protest as just an offshoot of a “power struggle” at the Tawang monastery.

“It is true that the Tawang monastery is powerful and has a considerable say in many matters but to just call  last year’s anti-dam protest as a result of only power struggle at the monastery would be to undermine the movement widely supported by the public. Why Lama Lobsang has won a lot of support is because people fear that that they will lose their land because of acquisition of land for big dams. It is a small place, land is precious,” he said.

The SMRF has long accused the National Hydro Power Corporation (NHPC) of fraudulently taking signatures of villagers agreeing to the projects during gram sabha meetings.

As part of the Forest (Conservation) Act, 1980, it is mandatory to seek prior consent of the concerned gram sabhas under the Scheduled Tribes (and Other Forest Dwellers) Recognition of Forest Rights Act 2006 before any forest is cleared for a project. The Supreme Court also reiterated the importance of getting prior consent of the gram sabhas in the Vedanta case in Odhisa in 2013.

On February 14, the Tawang district commissioner Sang Phuntsok held a meeting with over 100 monks who are members of the SMRF, along with public leaders and villagers to discuss the hydro power projects to be taken up by the NHPC in Tawang region. Pema’s brother and MLA Tsering Tashi and cousin Jambey Tashi, also an MLA, were present at the meeting. 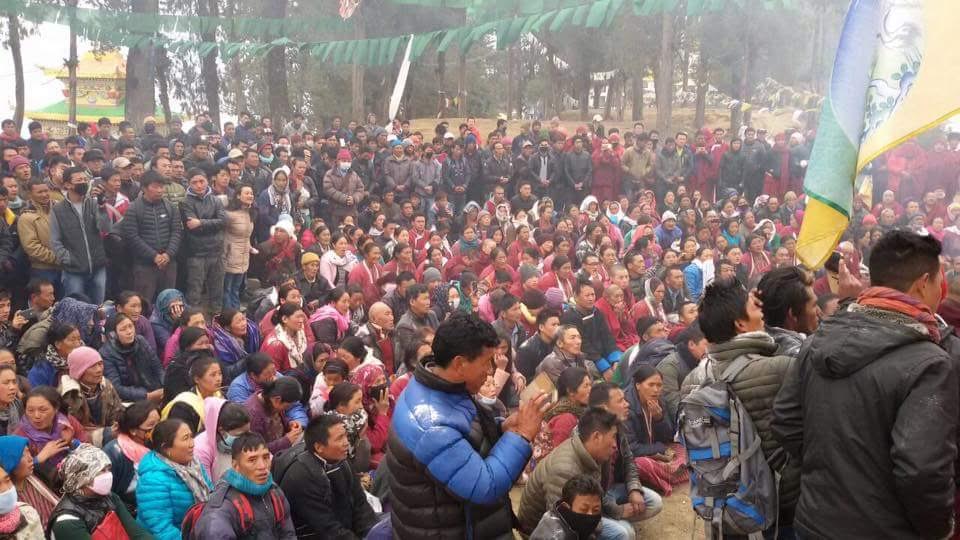 The crowd at the February 14 meeting called by the deputy commissioner in Tawang. Courtesy: SMRF

The people suggested cancellation of the Phase I and Phase II projects of NHPC as per which big dams were to be constructed in the Mon region. The NHPC has, however, already made an upfront payment of Rs 37.5 crores each for l Phase I and II to the Arunachal government in 2008 for those projects.

“We consider it a victory of public outcry. The administration had to bow down to people’s concerns and objections. We are not opposed to mini dams like 6 MW Mukto Shakangchu,” Lama Lobsang said, adding, “We also handed over a report to the DC with signatures of the land owners who have refused to back the NHPC projects in Tawang.”

Importantly, a committee was formed that day to submit a report to the government on the decision of the people over the NHPC projects under the guidance of Thegtse Rinpoche – the abbot of the Khinmey monastery of Tawang, who belongs to the Nyingmapa sect of Tibetan Buddhism.

Before the Gelugpa sect began controlling Tawang, it was the Nyingmapa sect that was said to be dominant in the region. It is believed that the location of the Tawang monastery, founded in the 17th century according to the wishes of the 5th Dalai Lama, was strategically chosen and well fortified keeping in mind possible invasion from the Nyingmapa sect with support from believers of that sect from nearby Bhutan.

It is in this historical context too that many in the state are also calling the Dalai Lama’s visit especially significant.