Corona Mata and the Pandemic Goddesses

The goddesses of pestilence have been invoked each time a disease has had to be fought or even inflicted. It is only fitting that nowadays, the 'Corona Mata' is being worshipped as a deity.

“Religion is based primarily upon fear. It is partly the terror of the unknown and partly as the wish to feel that you have a kind of elder brother who will stand by you in all your troubles and disputes. Fear of the mysterious, fear of defeat, fear of death. Fear is the parent of cruelty, and therefore, it is no wonder if cruelty and religion have gone hand in hand.”

In India, fear of the disease results in the invocation of the mother goddess who, if propitiated, has the power to tame the disease. She is not a benign goddess but a raging angry one who is feared and venerated at all points of time.

She is not one, but multiple deities invoked as “Amman”. During these distressful times, the desire to create and propitiate the mother goddess runs parallelly with the faith in medical science.

The goddesses of pestilence are invoked each time there is a disease to be fought, or to be inflicted. Therefore, it does not come as a surprise that in the times of COVID-19, the ‘Corona Mata’ is being worshipped as a deity.

Over time, a few goddesses have been invoked during the times of pandemic, who can well be called the Deities of Diseases. These deities are living goddesses in the Hindu pantheon who invoke awe and fear while offering succour in times of deep distress.

A reigning deity who is worshipped both for preservation and granting of male children is Shitala Mata, the goddess of smallpox. It is believed that worshipping this goddess will spare children of smallpox. Shitala is the North Indian reincarnation of goddess Durga who cures poxes, sores, ghouls, pustules, and diseases.

The story of the goddess is simple – she is fighting a demon called Jwarasur (the demon of fever). She rides her donkey into all the lands travelled by Jwarasur beating the demon into a pulp with her broom and cooling the foreheads of feverish children with cold water from a pot (‘shitala’ means sheetal or cold) and wetted neem leaves.

One of the most interesting aspects of her invocation is vaccination through possession – where the infected person would be possessed by the Goddess through a ritual. Once Shitala mata enters a body, she supposedly fights the fever with her antidotes in the presence of cold edibles inside the ritual room, and through processions of songs and performances outside it.

The most striking feature of the goddess has been her evolution through the ages. Initially known as Harita, then in later periods as Shitala in North India, and Mariamman in the south, the Goddess of Cholera, Shitala has been through many transformations. Perhaps, the most radical presence of goddess Shitala is as Traffic Circle Amman, blessing drives from the maniacal traffic situation in Bangalore!

The millennium city of Gurgaon which boasts of malls, multiplexes and high rises, has an old temple of Shitala Mata which is an extremely popular shrine of worship. The temple dates back three hundred years when the goddess is said to have come in the dreams of one Chaudhry Singh Ram who established the shrine in Gurgaon.

The earlier shrine of the goddess had been in a village called Keshopur and there was a dispute as to where the temple of the goddess was supposed to be located. The temple claimed legitimacy when the child of the governor of Jharsa under the Mughal rule, Begum Samru was miraculously cured of smallpox after she took him to the shrine in Gurgaon, cementing her faith in the deity and validated the claim that the goddess was the healer of much-dreaded smallpox. She also settled the land dispute once and for all – the goddess belonged to Gurgaon and would continue to be worshipped there. Even today, the temple garners huge footfalls and devotees throng the place to propitiate the goddess.

Ola Bibi represents the syncretic character of the Indian tradition. She is an important figure in the oral folklore of Bengal and has many shrines dedicated to her. The first cholera pandemic began in Bengal in the early 19th century and then spread across India by 1820. Hundreds of thousands of Indians and ten thousand British troops died during this pandemic. The cholera outbreak extended as far as China. It was at this point that Ola Bibi was invoked and regular prayers to her shrine were offered in hopes of a cure.

The Muslims address her as Ola Bibi or Bibima from the Olabibi song which tells the story of a young virgin princess who was lost and who later reappeared in the form of a goddess. Whereas, within the Hindu tradition, Ola Devi was the wife of Mayasura, a demon king who was known for his architectural knowledge. He finds a mention in the epic Mahabharata where the Pandavas are said to have enlisted his help in the creation of Hastinapur, their capital city. 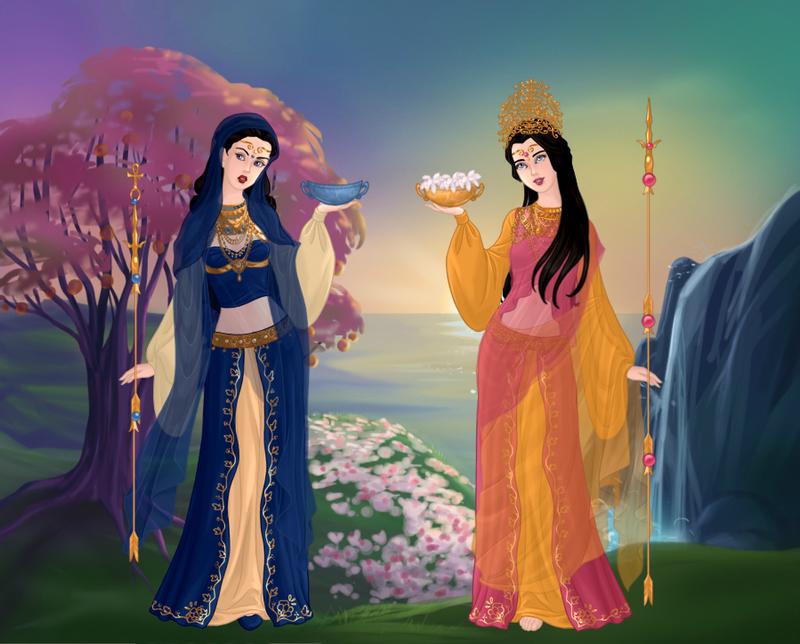 Ola Devi, the guardian deity is named after the Bengali term for cholera which is Ola Utha. Her intervention and benediction are sought in curing and saving the lives of people afflicted by the dreaded disease. The prayers to Ola Bibi/Devi reflect the shared traditions as people of both religions worship at the same shrine. In Bangal, she was Ola Bibi for the Muslims and Olai Chandi for the Muslims. David Arnold argues that before 1817, this goddess was far less popular than Shitala, but after the pandemic of 1817, her popularity increased among the masses.

Much like the cholera outbreak of the 19th century, the 21st century isn’t faring any better. Along with the on-going pandemic, communal tensions have been at an all-time high. However, despite the heated debates over the majoritarian politics, the shared cultural ties of the different religious traditions continue with the renewed reverence in the worship of Ola Debi/Bibi.

In the mid-nineties when AIDS was raging in India, misinformation and fear-mongering about the cause and the spread of this pandemic was rampant. On World Aids Day, December 1, 1997, a school teacher in the village of Menasi Kyathanahalli in Mysore district painted a silhouette of a boy and girl with their backs to each other on a stone pillar nearby. Little did he know that this would eventually result in a temple built in the name of Aids Amma, a shrine dedicated to the AIDS goddess. The goddess of Aids is a highway milestone where the writing is both in English and Kannada warning people to steer clear of unprotected sex.

The shrine to the goddess is now housed in a temple that has become a place of worship for people afflicted by the disease. They pray for quick recovery and deliverance from death. What started as an effort to sensitise people to the disease, has now been transformed into a deity referred to as Amma or mother where ritualistic prayers are offered to ward off the disease.

The current pandemic raging through the world is COVID-19 which has claimed countless lives. The pandemic has resulted in lockdowns across the world, the shutting down of cities and businesses, and has led to economic meltdowns. Currently, the fear of the virus is overarching since vaccines are now at preliminary stages.

In India, it has resulted in palpable fearmongering along with the usual mumbo jumbo cures thrown in by commoners, businessmen and politicians alike. This fear has resulted in the creation and propitiation of a brand- new goddess called the ‘Corona Mata’. At a time when places of worship have closed down in order to prevent the contagion, prayers offered to the corona deity continue in small pockets of Bihar, Jharkhand, Assam, and Bengal. So far the goddess is relatively unknown but if the disease continues to rage and the cure is far at hand, it is only a matter of time before she becomes a phenomenon.

Armed with ghee laden sweets, incense, flowers, and cloves, the women and priests of these regions have set out on a mission to appease Corona Mai and quench her bloodthirst. By burying the objects, there is a belief that the deity will spare their families from being afflicted by this disease. Along with the resurgence in the worship of Amman, Twitter and other social media platforms have seen an emergence in popularity of those deities as meme materials and the butt of jokes. #Coronamai and #superstition have been trending on twitter, as the Twitterati are up in arms over the blatant defiance of social distancing norms by some devotees.

The goddess has also been popularised as the Coronavirus Mardini where a Durga like Devi is seen slaying the demon of coronavirus. In a somewhat nationalistic depiction of the Bharat Mata, aka corona slayer, artist Sandhya Kumari depicts the goddess wearing a mask as she slays the virus. The goddess is seen wearing gloves and carrying sanitisers, masks, and other medical equipment, effectively conveying the “in public interest” advertisement. In this depiction of the Bharat Mata slaying the corona, a role reversal of sorts has happened where the corona is the demon and not the Devi. The Corona is being slain by the all-powerful goddess.

As the pandemic continues to rage, faith in the corona goddess is likely to increase. She needs to be placated before she agrees to spare the people by cooling off and becoming benign.

Also read: In Jerusalem, a Silent Easter in the Time of a Pandemic

When the male gods failed to kill the dreaded demon Mahishasur, they created the all-powerful Devi Durga and bestowed her with their own weapons. She is said to have continually grown hands in order to hold more and more weapons. And it was then that she finally slayed the vile demon Mahishasur.

Before going to war with Ravan, Lord Ram prayed to Goddess Durga and urged her to be on his side. Little surprise then, that in the times of the pandemic, people have resorted to worshipping the disease as a goddess and continue to pray for her benediction.