Leonardo da Vinci’s Salvator Mundi suggests the cross-fertilisation of ideas and practices that we take for granted today has a much longer history. 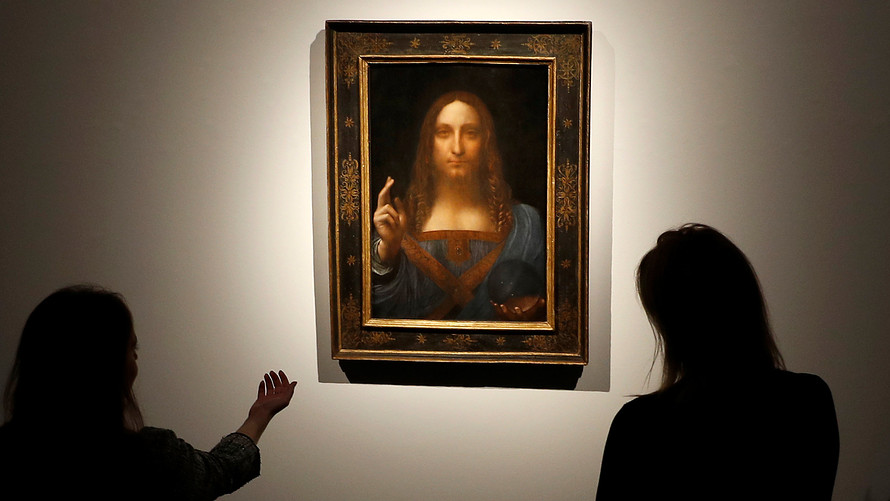 Smashing the record for any work of art sold at an auction, the long-lost painting of Jesus Christ – Salvator Mundi by Leonardo da Vinci – has sold at Christie’s in New York for $ 450.3 million: nearly half a billion dollars.

Salvator Mundi was painted around 1500 and was presumed to be lost until early this century. It was consigned to Dmitry Rybolovlev – a Russian fertiliser billionaire – who had acquired it from a Paris-based dealer Yves Bouvier for $127m, who had, in turn, acquired it from Sotheby’s in a private sale in 2013 for $50m less.

Christie’s described the painting of Christ holding a crystal orb in his left hand and raising his right hand in benediction as “the biggest discovery of the 21st century”.

The auction house refused to reveal the identity of the collector or even indicate which region of the world the collector comes from. Christie’s CEO Guillaume Cerutti said, “I cannot say if he or she will want to be public.”

However, some critics were quick to question the attribution of the painting to da Vinci and a controversy has erupted about the ‘much restored’ painting as an alleged ‘fake’. Several articles – by the naysayers from around the art world – are being published in the western press which delve into the finer details of the argument, and the matter is far from over.

But what intrigues me in da Vinci’s Salvator Mundi – we will have to hold the painting as genuine until proven otherwise – is the gesture of Jesus’s right hand, described as ‘benediction.’ It is a Buddhist mudra – ardhapataka, meaning ‘half-flag’.

Mudra in Sanskrit means ‘seal’, ‘mark’ or ‘gesture’. It is common to Sanatan Dharma (especially Hinduism and Buddhism) that has been deeply imbibed in culture, including symbolic iconography, dance forms, yoga, tantra and martial arts.

Some mudras involve the entire body, while most are performed with hands and fingers. They are spiritual gestures which are meant to channel prana – the inner physical and psychic energy – for specific purposes and effects.

I have a friend, Bibhudev Misra. He went through the much sought-after grind of IIT, IIM and a stint of several years in UK and US as an IT consultant, before he quit it all and returned to Kolkata for good.

Now he is completely devoted to his passion – myths, symbols and mysteries. He travels around the world to do independent research and writes articles on his blog. He ventures into specific topics and gathers meticulous evidence which challenges the establishmentarian or ‘mainstream’ perceptions and narratives.

I spoke to Misra about the ardhapataka gesture in da Vinci’s Salvator Mundi, and he guided me to his newest article, that through an uncanny coincidence, was about the very topic of my enquiry: Yoga Mudras in Orthodox Christian Art: Does it indicate a Hindu-Buddhist Influence?

In the article, Misra discusses similarities between the hand  gestures in several orthodox Christian art displays of Jesus and his apostles with the various mudras associated with Buddhism and Hinduism.

The following photo is from Bibhu’s article where Christ – in an image from Ravenna, Italy – appears to be displaying the ardhapataka mudra – familiar to Buddhism (and also Bharatnatyam) which suggests the hand gesture of Jesus in da Vinci’s Salvator Mundi is not something unusual or a bolt from the blue, but rather in line with how Christ was depicted elsewhere in medieval Europe. 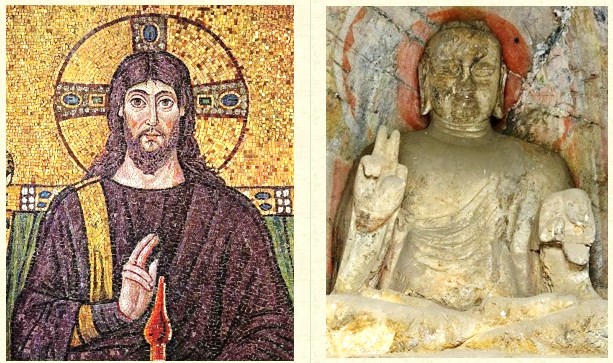 (One should note parenthetically that like Shakyamuni Buddha – a ‘brown’ sage from the Indian subcontinent who is depicted with features typical of an East Asian in China, Japan, Korea and the ASEAN countries – Jesus Christ is also depicted as a white Caucasian when in reality he was a brown West Asian).

Links between monastic tradition of Buddhism and Orthodox Christianity

How might the influence of Indian mudras have percolated to medieval Christian art and to the painting by da Vinci?

To answer this question, it is essential that the ‘unspoken’ links between Orthodox Christianity and the Buddhist monastic tradition are spoken about.

In order to do that, I need to tell the story of my travel to Saint Catherine’s Monastery in Sinai – one of the oldest monasteries of Orthodox Christianity that still practices the original form of the teachings. 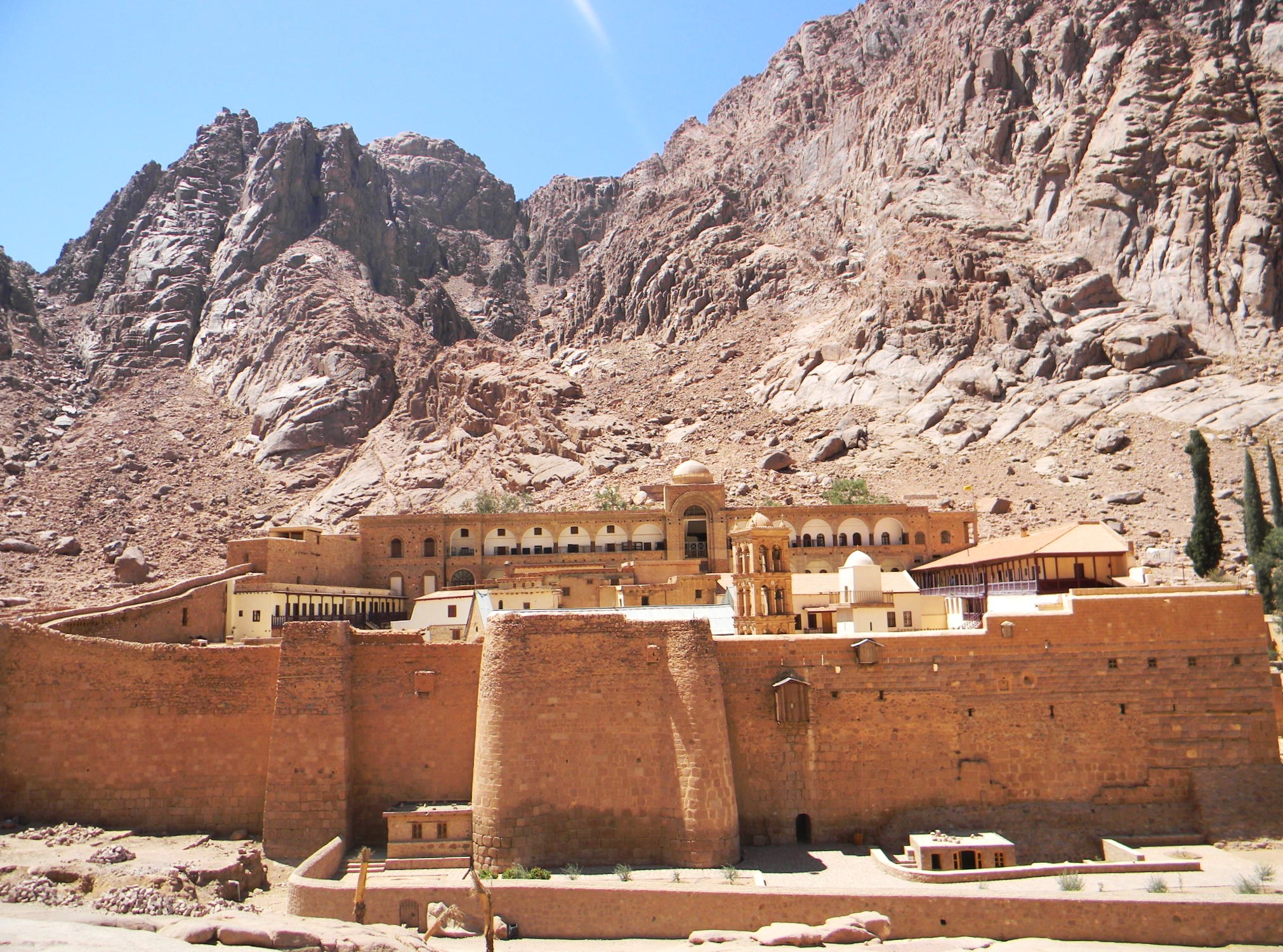 In August 2010 – the hottest month of every year in the region – I braved over 45°C mid-afternoon temperatures and travelled to Egypt and to the Sinai – the peninsula that lies between Egypt and Israel. For the Sinai trip, I was joined by a friend from Tel Aviv, who arrived from the opposite direction via the Israeli border town of Eilat.

The Sinai region looks much like Ladakh – bare brown hills and mountains with greyish and reddish hue, without any moisture and greenery, but alluring and mystifying.

The splendid road to Saint Catherine’s Monastery is stark, beautiful and dangerous. There were incidents of bandit attacks on tourists on the desolate rolling highway – passing through arid plains between barren hilly terrains; with no human habitation for miles – and terrorist attacks by radical Salafists in the sensitive region were already a menace. The most ‘infamous’ of the attacks was the 2005 Sharm El Sheikh bombings – that targeted a market and a hotel – which made prime time news all over the world. 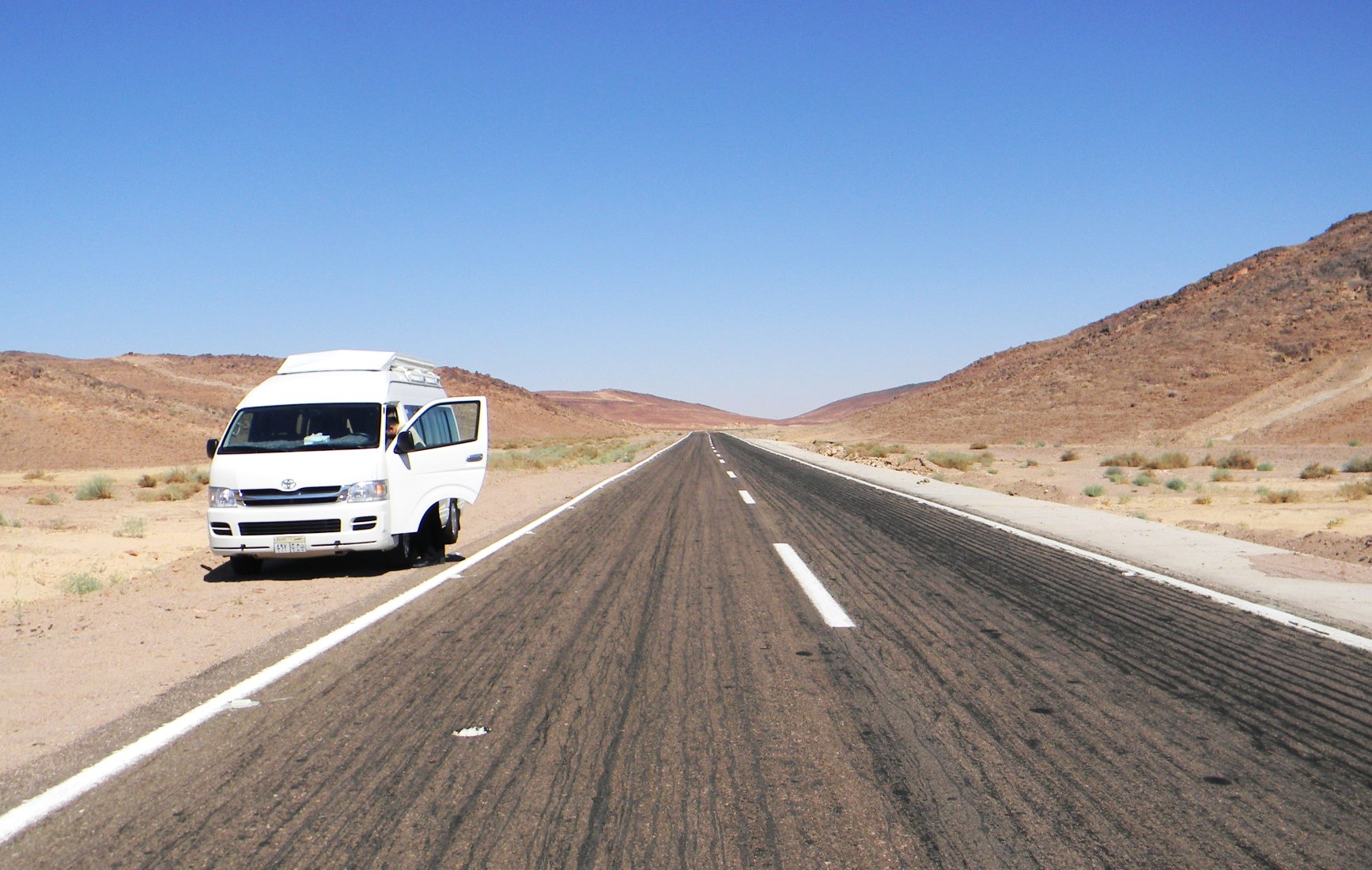 There has been a series of attacks – on a smaller scale, ever since 2005 – which didn’t make world news, but were known to everyone on the tiny peninsula that connects the two giant continents of Africa and Asia.

We hired a vehicle to go to Saint Catherine’s Monastery, which was few hours away from our isolated location. The rental car company from Nuweiba charged an astronomical amount for the day trip due to the security risks that the trip entailed. But we were already determined to visit the monastery, even after my friend’s impassioned negotiation in Arabic failed to get us any discount.

Sinai is a long way away from Kolkata – it involves three flights and a spectacular road trip from Sharm El Sheikh; I was on ancient Biblical land; I wasn’t prepared to return home without taking a look at the fabled ‘Burning Bush’ of Moses.

Saint Catherine’s Monastery (officially the ‘Sacred Monastery of God-Trodden Mount Sinai’) lies at the mouth of a gorge at the foot of Mount Sinai where Moses received the Ten Commandments. It is one of the oldest working Christian monasteries in the world – controlled by the Church of Sinai, part of the wider Eastern Orthodox Church – and a UNESCO World Heritage Site. 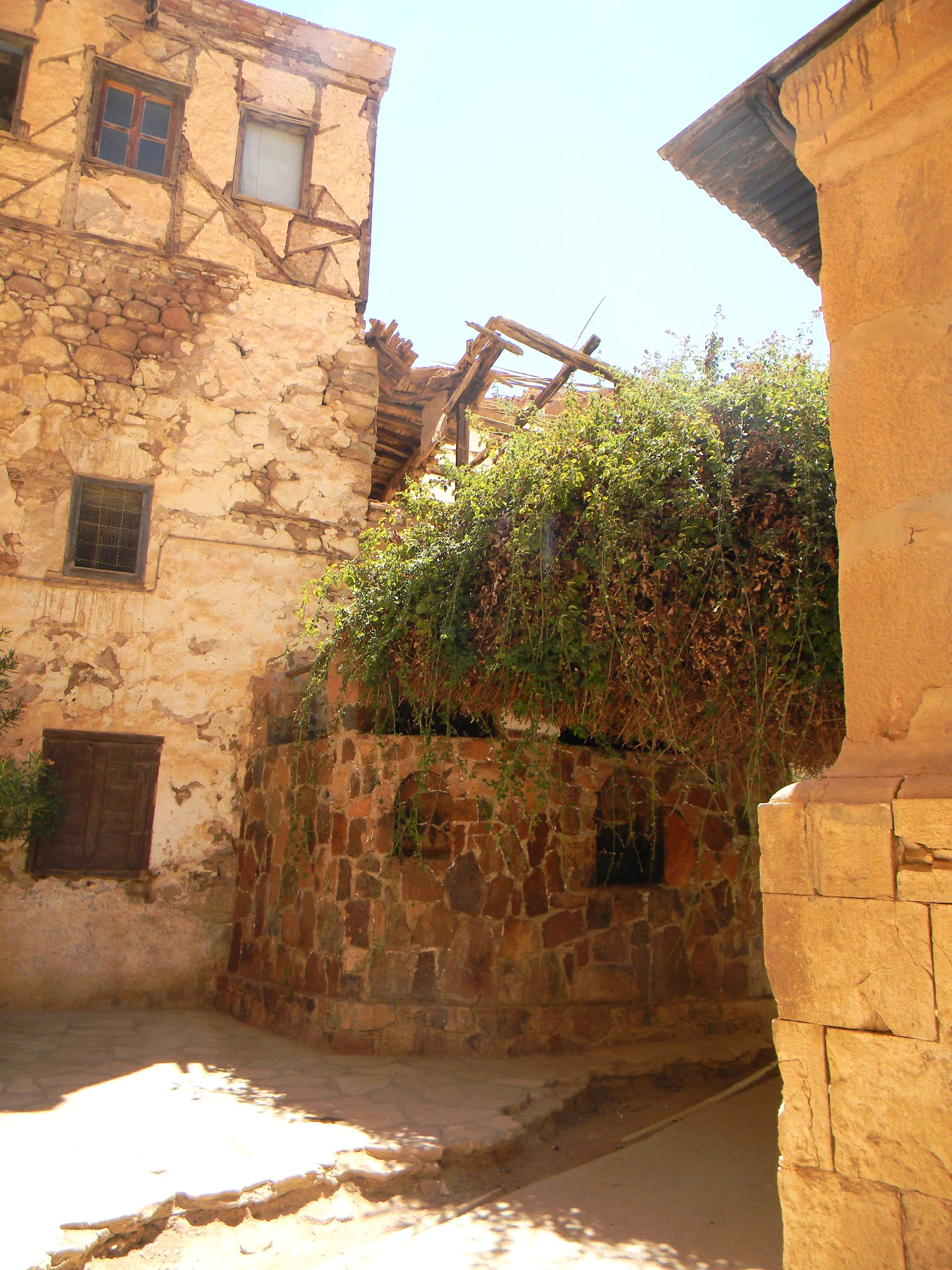 The monastery also contains one of the oldest continually-operating libraries which recorded the ancient monastic life in the region before the monastery was built by the Byzantine emperor, Justinian (who ruled rom 527-565 CE) enclosing the pre-existing Chapel of the Burning Bush (also known as ‘Saint Helen’s Chapel) that was ordered to be built by Empress Consort Helena, mother of Constantine the Great, at the site where Moses is supposed to have seen the burning bush.

The monastery was fortified by thick stone walls; it has never been sacked and a mosque was also created – by using the existing structures – inside the monastery walls during the Fatimid Caliphate (909-1171 CE) that is used for special occasions. The site is sacred to Christianity, Islam and Judaism.

The original ‘burning bush’ is believed to have been transplanted several metres away from the Chapel and its successor – protected by a stone wall – is tended by the monks who live in the monastery.

The bush is a native of the region. It is a ‘holy bramble’ of the rose family – Rubus sancta – and is known for its extreme longevity. However, the monastery’s bush neither blooms nor gives any fruit.

There were around 50 Orthodox Christian monks in the monastery when I had visited, who followed the ‘purest and the oldest form of the teachings’ in accordance with the apostles.

By visiting the monastery and closely observing certain characteristics, I was struck with wonder when I saw a resemblance – at least to me as a lay person – between the practices of the Orthodox Christian monks and the monastic practices of the Buddhist monks, who emerged 500 years before Christ.

The characteristics of Saint Catherine’s Monastery – asceticism, meditation, incense sticks, rosary beads, library to preserve ancient texts, colourful wall paintings which tell a story and secluded monastic living – resemble the ancient Buddhist monasteries which I have visited in the mountainous regions of India, Bhutan and Tibet. Many of the practices are similar, even though the faith differs.

Could it be that in our ancient world – whose deep history we don’t know, and may not ever know – the influence of the Buddhist monastic traditions percolated into ‘the original, the oldest and the purest’ practices of the Eastern Orthodox Church?

Could that be how the mudras were also imbibed, and then depicted in art?

The symbolic meaning of Salvator Mundi

When one’s perspective is influenced by certain experiences and specific knowledge, one isn’t surprised by the hand gesture by Jesus in da Vinci’s Salvator Mundi.

The truth of the past often becomes clear in the future when intentional and the unintentional omissions, mistakes, prejudices and interpretations are rectified by new generations. Astute research – with an open and impartial mind that seeks nothing but the truth – may lead to newer discoveries which will finally prove or disprove the theory, once and for all.

But there is no doubt that a cross-fertilisation of ideas and practices went on in our ancient world which we are only beginning to understand in the 21st century. Our ancient world was as open to cross-cultural influences as is our modern world.

The living proof of that is the work of art that is being described as “the biggest discovery of the 21st century”: da Vinci’s Salvator Mundi where the right hand gesture of Jesus Christ isn’t simply a benediction or a blessing, but appears to be the Buddhist ardhapataka mudra – a sign of protection and a gesture to dispel undesirable elements from one’s life.

The symbolic meaning of Salvator Mundi also becomes clear: Jesus Christ through his gesture of his right hand is indicating that Earth, the world or the universe – represented by the crystal globe in his left hand – is being sought to be saved from calamity, evil and darkness.

Devdan Chaudhuri is the author of Anatomy of Life. He is one of the contributing editors of The Punch Magazine. He lives in Kolkata.