Writers Should Maintain a Certain Distance with the World: Anita Desai

The award winning author on why she is now writing novellas and why diaspora writing is not for her. 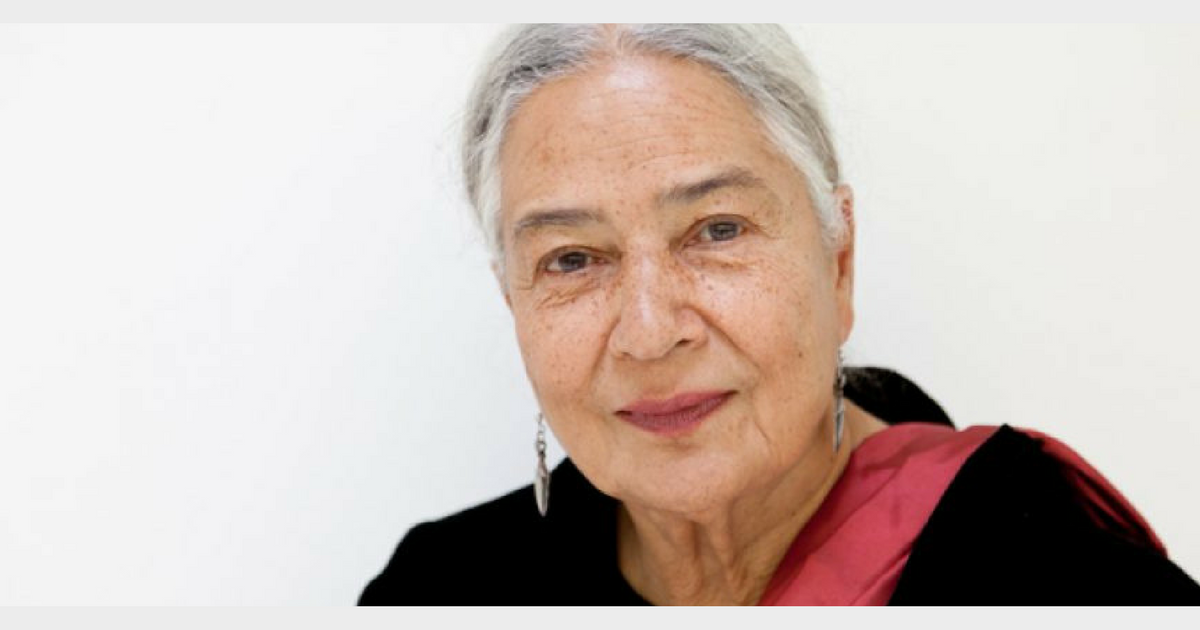 Anita Desai, three time Booker Prize nominee, winner of several prestigious awards and with more than 17 books to her credit, was awarded the International Literary Grand Prize at the Blue Metropolis Literary Festival in Montreal, on April 29. The 10,000-Canadian dollar prize is awarded each year – since 2000 – to a world-renowned author in recognition of a lifetime of literary achievement. Former winners include Norman Mailer, Margaret Atwood, A.S. Byatt and Amitava Ghosh. Desai, known for books like Baumgartner’s Bombay, Clear Light of Day and In Custody, spoke to The Wire in Montreal.

You have been awarded the Blue Metropolis International Literary Grand Prize. You received the Benson Medal in 2003 and the Padma Bhushan in 2014. Do awards matter, or are they incidental to the writing?

This particular award tells me I have crossed a border and am now of an age where I can be given certain awards! (Smiles). Awards are certainly incidental. They are unexpected; they are not something you work towards, no.

What do you think is the purpose of literature? The worth of literature is being questioned these days, certainly here in Canada.

One works on two levels. At the subconscious level one is not working with an agenda, one is working out of a compulsion to tell your story, to put words on paper, to keep something from disappearing. And the joy of using language ought not to be forgotten.

On a conscious level, after you’ve written your work, sometimes it takes you by surprise. You say, oh, is that what it was about? At the end of the book you say, so that’s why it stayed in your mind for so long. What’s the reason for writing it? And invariably the reason is to tell the truth, in a somewhat sideways, somewhat subversive way. You don’t always manage to do that openly, face-to-face, you have to find a kind of a secret way.

The truth about life?

You have a strong body of work dating back many decades. Do you have any of your books that are favourites, that have stayed with you?

Well, with most of the books when you finish them, you suffer from a period of disappointment. A feeling that this is not what you meant to do, that somewhere along the way you took the wrong turn.

And this happens every time?

Almost every time. There are only a few books when I had a different feeling, with an early book of mine called Fire on the Mountain. That was the first time I found my voice and I had already written three or four books, and I realised that I’d simply been imitating other writers, trying to be someone I wasn’t. With this book I felt this is my own voice, this is my style, this is how I write.

There are various other landmarks; like writing In Custody, because till then I had always been labelled a woman writer, a feminist writer, and I had to admit that I did write about women and women’s lives. So I very deliberately set out to write a book in which the characters were male, living in a very enclosed male world of Urdu poetry where few women have ventured. When I wrote that book I felt that at least I had managed to break out of that very domestic world, which I was holding myself back in, out of a kind of fear of venturing outside. It was what I knew best. This was a challenge.

What kind of research did you have to put in?

I didn’t do any research but I used to live in Delhi at that time, at a time when people still had a very high regard for language, for poets. It was very much in the air. I grew up hearing the Urdu language and Urdu poetry would always be quoted. It was also partly the glamour of the language. And there was another challenge – how to convey it in English. So when I was supposedly quoting poetry, I was actually writing it, trying to capture something of the rhythm, the manner of Urdu poetry, and I was very proud when someone came to me and said why haven’t you acknowledged the poets in your book? (laughs)

And there was another challenge and that was my book Baumgartner’s Bombay where I set out to bring together two very different worlds, two very different languages, two very different histories, the German and the Indian. The period was just after World War II and the first years of the Indian independence. Certainly that’s a book I did a lot of research for, to understand the history and time periods and how to blend them together and finally I was able to tell that story.

My mother was German and we grew up speaking German at home. My father also spoke German. It was the family language, and when I was writing in English, I kept thinking there was something missing here that I can’t say in English and I need to bring in the German part of my heritage.

So each book has its own story to tell.

With these three books you had a sense of accomplishment. Are there some books that disappointed you, which you felt didn’t work out for some reason?

Especially now that I look back, there are so many books I should not have allowed the publishers to publish — the first three or four books.

You don’t just see them as part of a logical apprenticeship?

Yes, but I think it’s better not to rush to print. There shouldn’t be such a pressure on publishing everything you write. One should hold something back; I wish I had.

I read one of those earlier books, Voices in the City, and I liked it. It had a raw quality, but the voice and the talent are apparent. It was different stylistically from your later books.

Thank you. It was overwritten. Over time my style has become so much more spare. I pare it down to essentials now. Partly it has to do with one’s failing energy.

Is there a change in your perspective on life that has partly caused the writing to change?

Yes. When you’re young its inevitable you write from your own experience, your own feelings, your own dramas, and as one grows older you’re able to see things from a distance, to bring in characters and histories that are not necessarily your own.

Your last book – The Artist of Disappearance – it’s three novellas, so it’s also a new form.

Yes, this kind of book suits me at this stage of my life. I can’t see embarking on a great, big novel. It takes too much out of one. Not just time, but an enormous amount of energy. I can deal better now with a smaller scenario.

We’ve talked about some of the struggles and process of writing. How would you summarise your experience?

I suppose I went through what every young writer goes through. It’s hard enough to find your voice, and write something that pleases you, and then it’s very hard to find a publisher, readers. The first years after [Indian] Independence were hard, when the publishers just wanted to reprint British and American books, and those were the years that I was writing. Even as great a writer as R.K. Narayan had to publish his own books and start his own press. How many decades passed before he was recognised. A great, big change took place in the 1980s with the publication of Salman Rushdie’s Midnight’s Children.

And now there’s an explosion.

They say it’s every five minutes that an Indian author is born.

Yes, really! So what would you say are the joys of writing, if any? So many writers speak only about the anguish.

There’s joy, certainly, otherwise why would one have chosen this silent, obscure life? You are sitting at your desk; there’s no word of encouragement, but then there’s this joy of using language, trying your hand at writing something that’s worthwhile, that actually dares to take place. On the days that you’ve done a good piece of work, there’s no pleasure like that really. Comes once in a while, not every day.

Would you say most of the joy is inward rather than in praise, or in interaction with people?

It is. Nowadays it’s become very popular to join a writing class, but I never took such a class. When I started teaching it I asked myself how can you dare to do such a thing? You know perfectly well writing can’t be taught. But it has its uses in that it gives a young writer the time and space to work, and it becomes a legitimate activity. Just to be with other writers, that must be encouraging. Better for one’s psyche.

Did anything change when you moved abroad?

When I moved abroad I lost touch with what had been my material, what I knew so well. I could write about it with such confidence, I knew I was getting it right. Travelling, living abroad, one has a sense that one may be getting it wrong. You’re guessing. Losing one’s material is a great loss. I go back to India all the time, I have family there, but I feel there’s a great gulf now, and it is widening. And I really haven’t earned the right to speak about the lives there, just as people there cannot imagine what experiences I have gone through. On the other hand, one has exchanged it for the larger world, for better or for worse. One has stepped out of one’s comfort zone. It’s challenging, and exciting sometimes.

What about writing books set in the Diaspora? Or continuing to set your books in the period you knew?

There’s a big risk to writing about the past, there’s the trap of nostalgia. It’s a distortion; it’s not truthful or accurate. You are awash in sentimentality, in memory. One has to be very rigorous. As for Diaspora that’s become a very popular subject with so much migration going on in the world, the largest ever. I have not managed to feel at home in that. I feel self-conscious. It interests me but that has never become my subject. To write about long-term exile as Naipaul did, it’s not easy. You have to know that subject of being a foreigner, of being a stranger, extremely well, to write.

How long have you lived in the West?

It’s been about 25 years, but not full-time at first. Then I started teaching full-time here. I’m drawn to the subject of the stranger, though not my own strangeness. One book I wrote was about strangers in Mexico uncovering their family’s past [The Zigzag Way]. I can do it if it’s one removed.

I remember reading that you felt at home in Mexico.

Yes, there were so many parallels with India. Such an ancient country, every stone has history. This you can’t find here [in the US]. People have come there from so many parts of the world, some arrived almost without meaning to.

As a final question I cannot resist a cliché – what advice do you have for writers?

Writers should maintain a certain distance from the world. First discover what’s inside, before you send it out, before you engage with the world. Find out first what’s within you, what you want to say and how you want to write it. I can mention my daughter [Kiran Desai] who took ten years to write The Inheritance of Loss and she’s taken seven years to write her next book, which I think is now drawing to a close. It’s important to build that interior world.