An Artist's Lifework Painted Over by the Brushstrokes of Bureaucracy 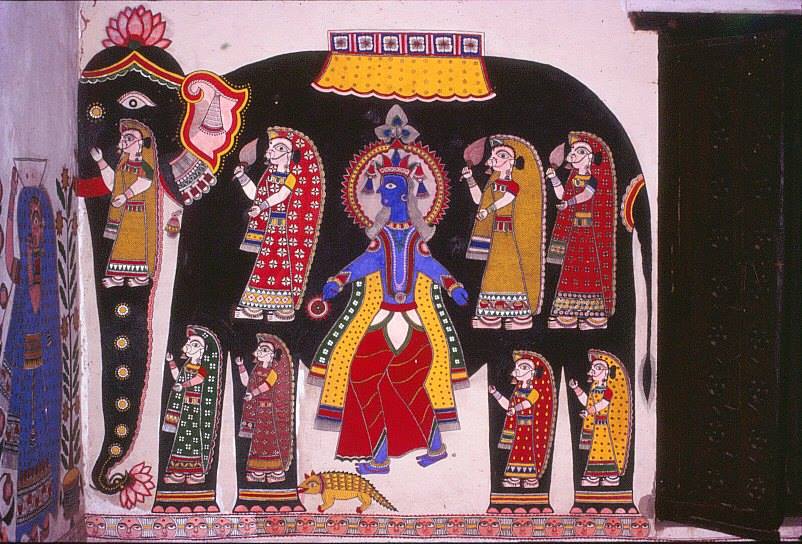 New Delhi: In an act of bureaucratic vandalism that is being condemned by art lovers in the Capital, the Crafts Museum has destroyed an iconic representation of a bridal nuptial chamber from Mithila known as a kohbar ghar that was specially painted for it by an acclaimed artist from Bihar, Ganga Devi (1928-1991).

Breaking the news of the chamber’s demolition, Jyotindra Jain, a former director of the museum, said the walls of the room had been “painted from top to bottom by Ganga Devi over a period of 3 to 4 months” despite suffering from cancer.

“It was in late 1980s. She was detected with cancer and the doctors suggested that she should not be allowed to go back to Mithila as she needed regular chemotherapy. So we gave her some space at the Crafts Museum to stay and get herself treated. Since she was in acute pain those days, she wanted to keep herself busy, wanted to draw. We gave her a room to paint. Almost all the four walls of that room were painted by her from the floor to the ceiling. The date of completion of the work as signed by her on it was 1.1. 1990.”

The work was considered so remarkable that it has been well documented in major art books, said Jain. “I did it too in my book on Ganga Devi. How can an important work of art just be allowed to vanish like that, that too in a museum?” Even as Jain and others mourned the loss of the work, museum officials justified their action. The Crafts Museum has been headless since April, when its last director, Ruchira Ghose retired, but the government is pushing the staff to implement a modernisation plan in time for the India-Africa summit this October. “We removed [Ganga Devi’s work] as part of the renovation”, a museum official told The Wire. “It couldn’t be saved, the mud was peeling off, the paint was fading, everything was coming off. I have been associated with the museum for the last 30 years, don’t worry, we will get another made.” He acknowledged that it would be very difficult to get people to do a kohbar ghar. “So we will ask Shanti Devi, who is from Ganga Devi’s family, to make one in the renovated hall.”

Jain, however, contests this claim. “When I saw the kohbar ghar 4-5 months ago, it was in good shape,” he told The Wire. “There was just a bit of chipping here and there which shouldn’t be a reason in today’s times to discard an important art work. My question is, did they take the report of any art conservator before demolishing the walls? Should it not have been the right way to go about it?”

As for the idea that the museum can simple “get another made”, Jain says the work is irreplaceable. Ganga Devi was a true legend as an artist and was nationally recognised with a President’s Award, a Padma Shree. Ganga Devi’s was the “only example of a complete iconographic rendering of Mithila’s kohbar ghar and that too, painted in her extraordinary personal idiom.” The painted chamber was “an extraordinary and unique monument in the history of contemporary folk and tribal arts of India.” Poonam Devi, whose husband was one of the two nephews of Ganga Devi who stayed at the Crafts Museum to make the kohbar ghar in the 1980s, also spoke with reverence of Ganga Devi’s work. After her husband passed away last year due to lung cancer, Poonam, a resident of Ashok Nagar in Delhi, was given employment at the Crafts Museum as a daily wage earner. She too does Madhubani painting. “Ganga Devi was my husband’s aunt. She taught all of us the art, including the daughter-in-laws. That is how I and my sister in law, Shanti Devi learnt the art of making a kohbar but not as skilfully as she used to do.”

A kohbar ghar interpretation on a wall near the deputy director’s office at the Crafts Museum painted by Shanti Devi. Credit: Sangeeta Barooah Pisharoty

Poonam remembers the effort Ganga Devi put in to her painting at the museum. “She was in utter pain those days … I saw it being done bit by bit and I saw it being demolished too. It was sad to see it go. The museum could have saved that wall. For a long time, it just didn’t take care of it and one day they just razed it all.”

Jain, too, is inconsolable. “I feel so numbed and devastated, to say the least.”

The room which once hosted Ganga Devi’s famous work now has whitewashed walls. In the middle of the hall, workers can be seen trying to fix another beautiful piece of folk art.  “That work is also by a President’s awardee who is no more. It is a grain storage jar. How can the museum allow it to be mishandled like this?”, asks Jain.