Traditionally, institutions of higher education have served as fertile ground for discourses critical of the state. Yet, more and more institutions in the country are coming under fire for fostering an ethos of free expression and dissent. As the consequences of being deemed "anti-national" loom large, fear, violence and parochialism do not just endanger our universities– they threaten the cornerstone of our democracy. 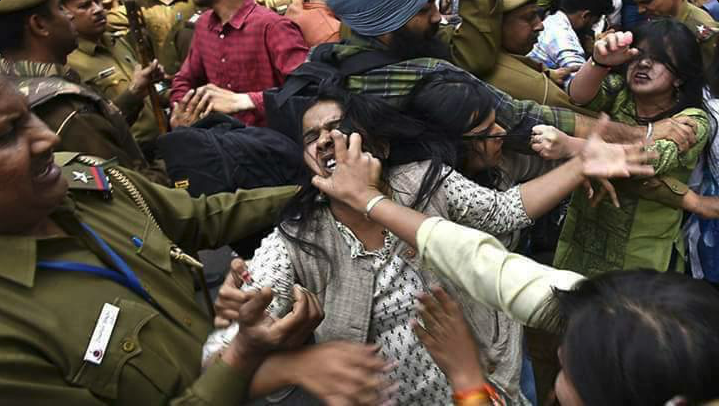 Right-wing aggressors like the ABVP seriously threaten the future of our universities and our democracy. Credit: Twitter

New Delhi: The domino theory applies to academic freedom too, evidently. Just two days after the Akhil Bharatiya Vidyarthi Parishad (ABVP) violently stormed Ramjas College and disrupted a literary event, the Ambedkar University Delhi (AUD) authorities ‘postponed’ an event marking the anniversary of the Kunan Poshpora mass rape in Kashmir of 1991. On February 23, scholar Gowhar Fazili was slated to present an academic paper entitled ‘Familial Grief, Resistance and the Political Imaginary in Kashmir’. Less than 24 hours before the scheduled programme, Fazili was informed by a member of the administration that the programme was being postponed due to the current climate around higher education institutions in the country. “So sorry but as you can see the times are bad for the university as a place for free speech and free discussions and critical engagements in our society,” it concluded.

Commenting on the incident, Fazili told The Wire in an email, “It appears the faculty and administration developed cold feet and backed out of the programme following the ABVP riots in Ramjas College. The violence has had a chilling effect resulting in the cancellation of various academic and cultural events across campuses. It seems Freedom of Expression is not a value dear to academicians in India. They acquiesce to the demands of the mobsters with ease. In a decent country there would be some resistance and effort to enable forbidden speech only because it it was violently suppressed. I also think the state and institutions should be held accountable for failing to protect academic and political freedoms or explicitly proclaim that India is no longer a democracy.”

Apart from Ramjas College and AUD, the impact of the ABVP’s wrath has extended to SGTB Khalsa College, which was forced to cancel its annual street play competition, the Times of India reported. Amit Tanwar, president of the ABVP-led Delhi University Students’ Union (DUSU), claims he told the principal that if there were “objectionable and anti-national” elements in the event, security for it could not be guaranteed.

While college principal Jaswinder Singh denied being under any pressure, theatre convener and an assistant professor at Khalsa, Saikat Ghosh, confirmed that the event was cancelled after repeated threats from DUSU. Singh stated that the college administration had consulted all stakeholders and police and decided to “postpone” the competition because the current climate in the nation was not conducive for the event. Meanwhile, Ghosh contended, “They objected to some of the plays which were critical of their idea of exclusivist hypernationalism,” he said. Ghosh claimed there were “repeated threats from DUSU and the police also appealed to us to call off the event in the interest of restoring peace and normalcy in the campus.”

ABVP’s Tanwar said that the principal consulted him. “I told him he should read the scripts and see for himself if there is anything objectionable,” he said. “Though we had no objection to any play in particular, I told the principal that if there is any play that’s questionable and ‘anti-national’, then the security of the event cannot be guaranteed.” The student president of the theatre group echoed the principal’s statement and denied facing pressure from DUSU. He said they had “taken the views of all stakeholders of DU,” including the police. “The police told us to take a decision on the event, and promised us security, if required,” Singh added.

Pratyaksh, the street play competition, was organised by the college theatre group, Ankur. It was part of the SGBT Khalsa college fest, Lashkara; nine colleges including SGTB Khalsa were set to perform. A wide variety of plays had already been confirmed: Accidental Death Of An Anarchist by Kirori Mal College, Saare Jahan Se Acha by Hindu College and Sawal To Uthega by Sri Guru Gobind Singh College of Commerce. Main Kashmir aur aap? Main Manipur by Gargi College and Kachru Ka Monologue by Vivekananda Institute of Professional Studies were in the process of receiving confirmation.

Traditionally, institutions of higher education have served as fertile ground for discourses critical of the state. Yet, more and more institutions in the country are coming under fire for fostering an ethos of free expression and dissent. As the consequences of being deemed “anti-national” loom large, university administrations across the country appear to be seeking comfort in the path of least resistance.