An Informal Guide to the Ambedkar National Memorial in Delhi

The memorial is worth a visit, both in terms of a vision of modernity and sanitisation of history. 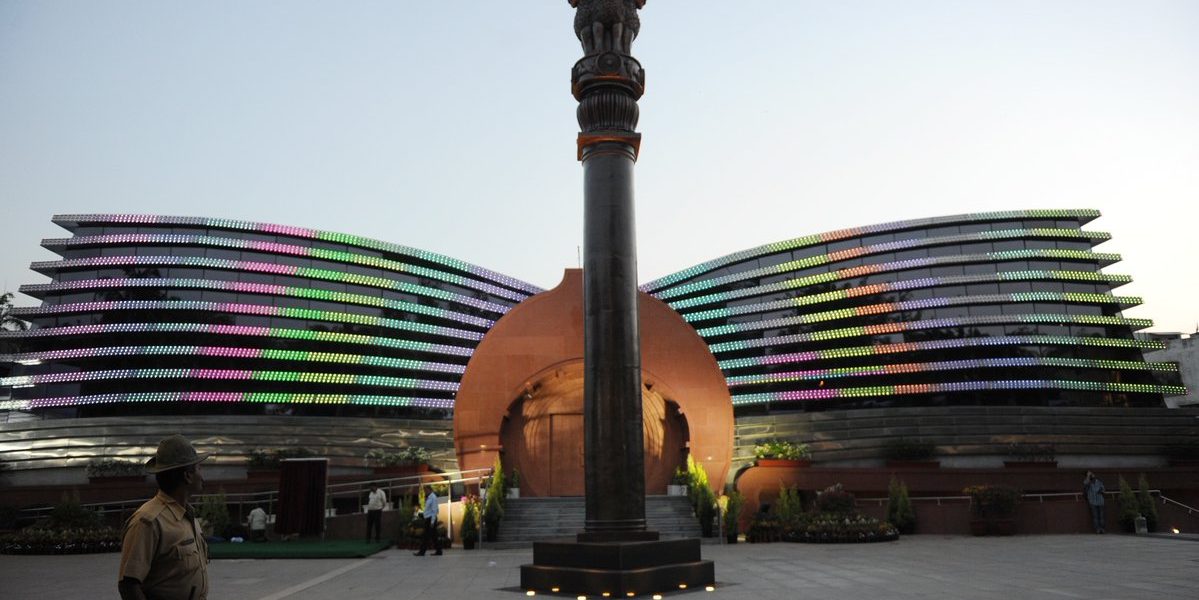 My neighbourhood once boasted of Dr B.R. Ambedkar’s residence at 26 Alipur Road, a long, L shaped two-storey building where Babasaheb had lived and died in 1956. For years, the neglected but gracious building was an integral part of Civil Lines and it housed Ambedkar’s books and personal artefacts. For years, it had been unforgivably neglected.

The new Ambedkar memorial that came up by razing this historical and dignified building has been described as an architectural marvel in the shape of an open book (the Constitution) with vast landscaped gardens. The memorial, built with at a cost of Rs 100 crore, was inaugurated by Prime Minister Narendra Modi in 2018. Built in record time, it will certainly change the way we will now view Ambedkar.

I went to look at this marvel to pay my respects to Ambedkar, the writer of Annihilation of Caste and as someone who began his writer’s life as a trenchant critic of the caste system. The memorial consists of two floors that showcase huge and gigantic display boards stretching up to the ceiling. They host a collage of the many important events of Ambedkar’s – and our nation’s – life.

Throughout the first floor, the emphasis is on Ambedkar the nationalist icon, the maker of India’s constitution. Surprisingly, his life long engagement with caste is given negligible space, in only one display, where he is mentioned as an anthropologist and a writer. 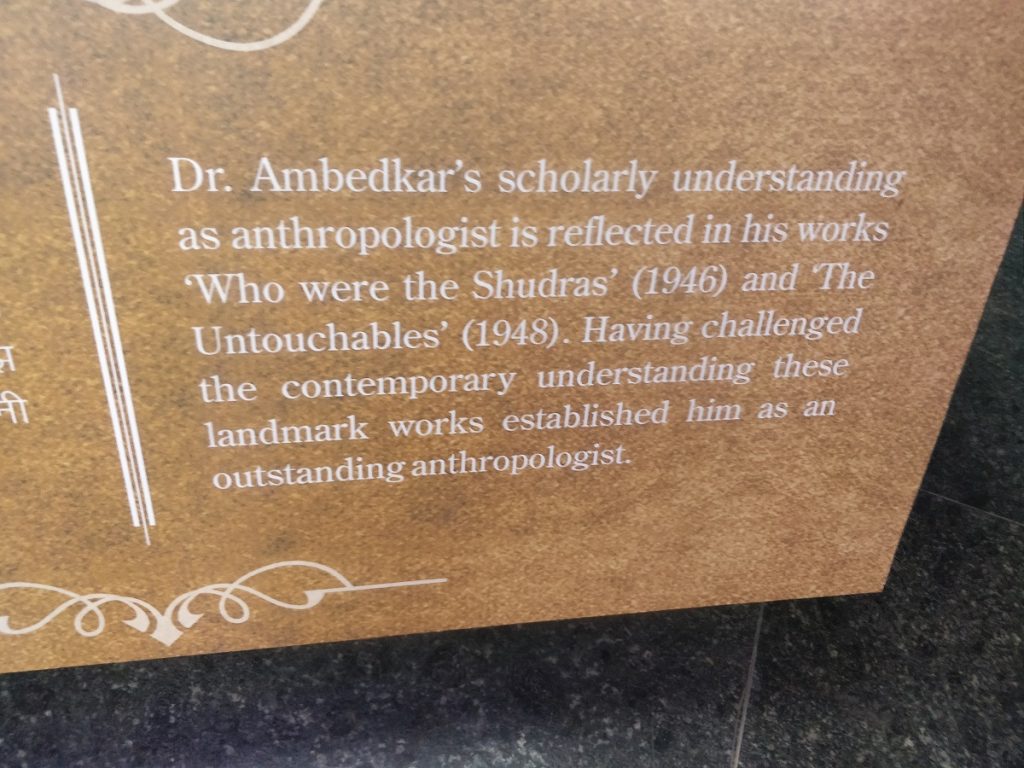 The lighted columns are too high for comfortable viewing and too overwhelming with LED displays. In places, the virtual reality displays are over the top (literally so!) and aesthetically superfluous.

However, what is insufferably puerile are the life-size figures and representations of Ambedkar and other political leaders – especially the one where Babasaheb is handing over the copy of the new Constitution to members of the cabinet (displayed in a glass case) or the one where he is sitting under a Bodhi tree.

The life-size statues seemingly resemble figures in reality, except that they are doll-like representatives of the real. They do nothing to add to the memorial’s intrinsic thrust to humanise Ambedkar or to make his presence palpable to the viewer.

Some of the photographs on this floor are unmarked, without the names of the people in them and where there are citations, they are mostly indifferent with some typos. A big board has the names of major icons of Dalit social and political resurgence, like Jogendranath Mandal. But there is no information on them, apart from their names and the dates of their births and deaths. 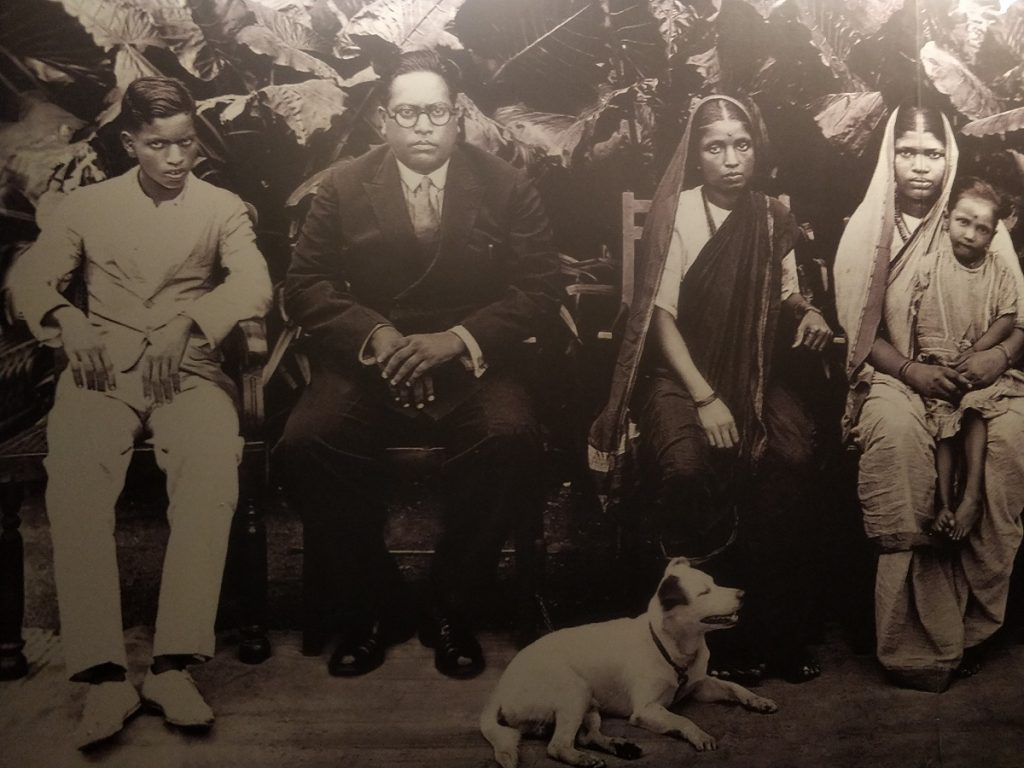 A family portrait of Dr B.R. Ambedkar without naming any of the people who appear on it, such as his wife Ramabai, his two nephews or his pet Tobby. Photo: Debjani Sengupta

The lower floor is of greater interest, with pages of the Constitution on display. The boards are at eye level and one can leisurely view the pages that originally had drawings by Nandalal Bose. A physical copy of the Constitution drives home to the viewer the text that symbolises all that India is and will strive to be. The meditation hall is also tastefully done up, as is the little room where Babasaheb’s personal artefacts are displayed. The paintings on the wall in the meditation hall are both artistic and serene, with blooming lotuses on a blue background. The interactive display screen could have been made more child-friendly.

The memorial is worth a visit, both in terms of a vision of modernity and sanitisation of history. Ambedkar’s critique of caste and caste privileges are given the short shift, while his stint as India’s first law minister is highlighted and appropriated. The imposing memorial is ‘New India’s’ gesture to one of her founding fathers, yet it left a deep vacuum in my mind. The materials exhibited did not showcase the critical intelligence and humanity of Ambedkar. Instead, we have an overwhelmingly monumental, brash and muscular display of a particular moment of our nation’s past.

Also Read: On Ambedkar Jayanti: Remembering the Annihilation of Caste

It would have been so much better if, in a quiet contemplative corner, the visitor could come face to face with Babasaheb through any one of the extant videos or films of him, speaking, exhorting, being himself. Or in a glass display case, we could have seen a sample of his writings. Similarly, at the information desk, there is no available printed material on Babasaheb’s life or pictures of the old building where he actually lived. There is no bookshop on the premise that sells his works. The little café tucked away but strategically placed on a departing visitor’s path is euphemistically called Sanchi café and sells packaged food like sandwiches and aerated drinks. I would have liked a few of Babasaheb’s favourite dishes on the menu!