Amar Akbar Anthony is a Reminder of a Gentler, Secular India

Remakes of old films usually turn out to be duds, but this film deserves to be made again to tell a younger audience about a different kind of India 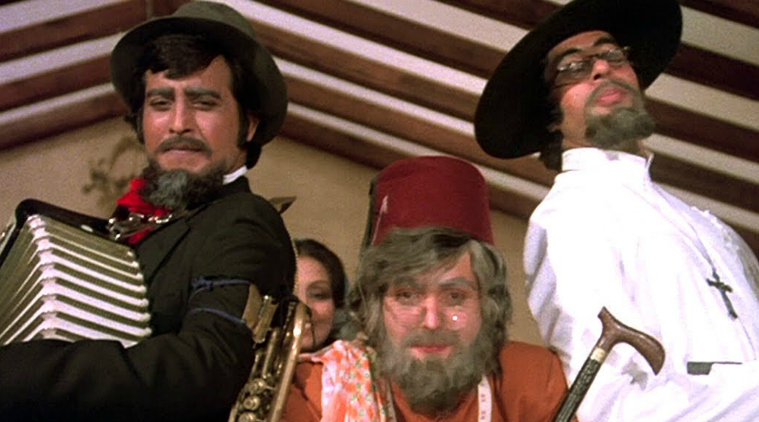 A still from the film Amar Akbar Anthony

Amar Akbar Anthony, that great entertainer from the 1970s, has completed 40 years. Amitabh Bachchan, who played Anthony and undisputedly dominated the film, recently tweeted, “Ran for 25 weeks in 25 theatres in Mumbai..!!, and still runs…, a classic!” The movie is a staple on television and despite its period feel, has travelled well over the decades—a few minutes spent watching it are sure to produce a laugh or two.

For those who saw it on the big screen the first time round, it triggers memories not just of the film but also of the times. There is nostalgia for the songs and the fashions but we also remember a different India. In a very unique way, Amar Akbar Anthony more than many other films of the time, is a cultural marker of that India—an India without terrorism and when no gangs roamed about looking for people to lynch.

India had just come out of an Emergency, but even at the height of state of power and coercion, no one dictated what one could eat. Indeed, the central message of AAA is the very Indian quality of tolerance, for our fellow citizens whichever religion or faith they may belong to. In his own style of inspired silliness, and without preaching to anybody, Desai wrote an ode to secularism. The phrase ‘Amar Akbar Anthony’ is now shorthand for unity in diversity, even in these fraught times.

The story of AAA is well known. Three brothers are left behind in a park by their father and when he doesn’t return, are adopted by three families of different faiths. One grows up to be a cop (Vinod Khanna), another a singer (Rishi Kapoor) and the third the owner of a country liquor bar (Amitabh Bachchan)-Desai managed to get three top stars of the time to appear together in one film. Their mother has gone blind and their father, originally a driver, is now a successful smuggler. Throughout the film, they come face to face with the others without knowing their relationship. The audience is in on the secret and enjoys the dialogues, which are full of innuendo and references to bhais and baaps, but it is not till the end that the characters realize they are one big family.

In true Desai style, the film was full of outlandish and over the top situations. Early on in the story, the three brothers donate blood which flows directly into their mother’s blood stream. Much later, she recovers her eye-sight when two sparks of light travel from lamps (diyas) near an idol of Saibaba of Shirdi. Not to be missed is the remarkable coincidence of a qawali being sung to the Saibaba by her son Akbar. All these moments raise a laugh today but in the context of the film are entirely probable, if not believable.

There were murmurs of protests at the time about a Muslim singing to an idol, but nothing came of it. Similarly, some Catholics had objected at the portrayal of Anthony, played by Amitabh Bachchan, as a bootlegger and drinker – and also to a framed picture of Jesus Christ in the bar – but after the intervention of some priests, that controversy too died down.

The drunk Christian was a familiar stereotype of films of the time. But equally, there was another stereotype that was less offensive—the kindly priest (and an occasional variant, the golden hearted but tough nurse.) Muslims were usually shown as kind-hearted Rahim chachas or dissolute and romantic nawabs and their beloveds who exclaimed ‘hai Allah’ after every other line. But they were all uniformly gentle. During an interview to me about the film, Rishi Kapoor had pointed out that in the final fight scene, he landed just one blow on a bad guy, and that too after asking the Almighty for forgiveness—as a singer and a pious Muslim, violence was abhorrent for him.

The genre of ‘Muslim socials’ – or Islamicate themes, as academics would have it – were hugely popular in the 1950s and ‘60s. In the 1970s, we had the loyal Sher Khan in Zanjeer and the blind Imaam Saheb in Sholay. The benign Muslim remained with us till much later, after which he (and she, since there was no dearth of mohtarmas and khalas), gradually faded into the sunset.

In the post-1990s phase, filmmakers discovered newer audiences, in India and among the large Indian diaspora all over the world. These audiences had a different view of India, which was driven by nostalgia not for Indian diversity but for Indian tradition, but in the garb of modernity.

The 90s saw monumental economic and social changes–the rath yatra, the fall of the Babri Masjid and the horrific riots in Bombay and elsewhere created new narratives; the Muslim was now no longer seen in the same light as earlier.

More often than not, the Muslim character in Hindi films today is associated with terrorism sometimes directly (Sarfarosh), sometimes slyly (A Wednesday). Equally, there are Muslim victims of terrorism and brave officials who fight it. It is as if the community has no other attribute. The modern Muslim or indeed a normal Muslim are missing in action.

There is much to criticize in the hokey stereotyping of the past – and Amar Akbar Anthony is as hokey as they come — but one can’t fault the messaging.

Every now and then one reads of a possible remake of Amar Akbar Anthony. Given the record of remakes (Ram Gopal ki Aag, Zanjeer) one shudders at what the outcome will be, so its best left alone. But perhaps, just to evoke a different India and its core values, a reprise of Amar Akbar Anthony may not be such a bad idea. It will at the very least tell the young Indians of today that India was not always like it is today.