ABVP Is Bulldozing Its Way Into Campus Spaces, But India's Students Show They Won't Back Down

The Sangh brigade is trying every tactic to silence any view that opposes its agenda.

Students protesting against the ABVP in New Delhi on January 28, 2017. Credit: Ram Rahman 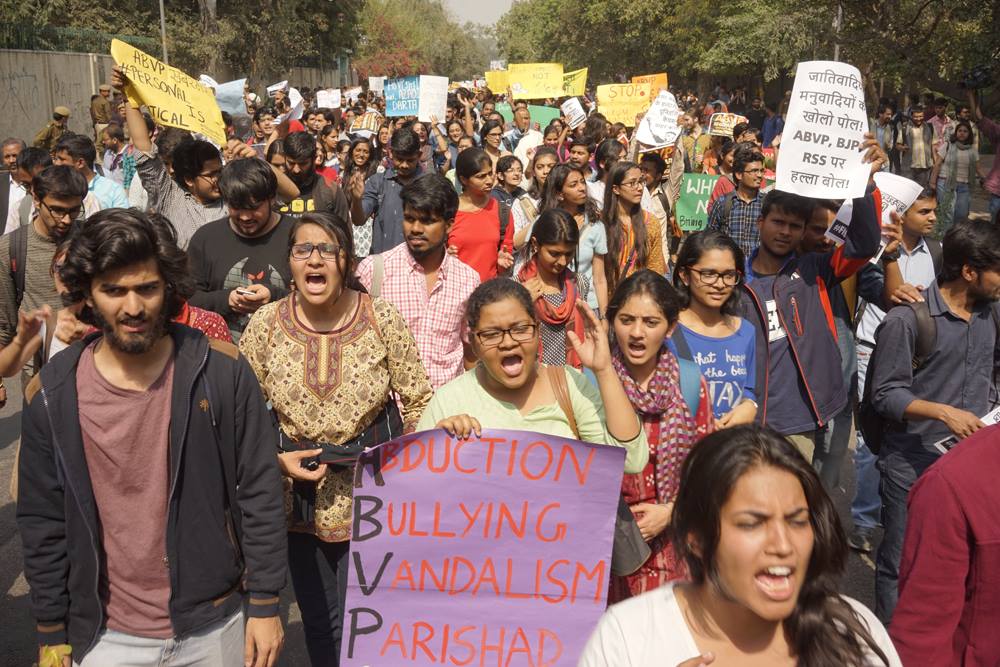 Students protesting against the ABVP in New Delhi on January 28, 2017. Credit: Ram Rahman

The Oscar ceremony this year got a lot of publicity because of a silly goof up in announcing the winner of the Best Picture award, but something much more significant went less noticed. Many actors, resplendent in their elegant designer gowns and tuxedos, wore blue ribbons in support of the American Civil Liberties Union (ACLU). The ACLU has been at the forefront of fighting US President Donald Trump’s ban against those from seven Muslim countries, even if they have visas and other legitimate documents.

The Oscar ceremony itself was full of references to the anti-immigrant policies of the current administration, with plenty of digs and jokes against the president, but this was perhaps the most powerful statement against him and his actions. None of the ribbon-wearing actors made any grand speech about their decision – there was no need.

Now imagine a Filmfare award function (or any of the many song and dance shows with ‘awards’ attached to them) where our stars make a quiet, subtle reference to any issue of the day – say freedom of speech, violence against students or, God forbid, “intolerance”. The Indian film fraternity, especially Bollywood, has figured out that making political statements is hazardous, especially in the current climate of coordinated troll attacks. Knowing that these trolls are backed by well-oiled political machines can scare-off even the bravest of actors. Best to remain silent, then.

There are individual voices, of course. Dibakar Banerjee was among 12 filmmakers to return their national awards in 2015 in solidarity with protesting FTII students. In 2016, when the censors ordered several cuts in Udta Punjab, Anurag Kashyap came out with his guns blazing. Now, Javed Akhtar and Naseeruddin Shah have taken a stand against the trolling of young Gurmehar Kaur. But all these are outliers, more the exception than the collective rule. The truly big names remain quiet or succumb to the slightest sign of pressure, like Karan Johar did.

But there are others, such as Randeep Hooda, who align oneself with the powers that be. He mocked Kaur, who stood up to the ABVP, and, after he was called out, sunk himself even deeper into a hole by calling her a pawn. To Hooda, it must have seemed not just clever to publicly troll a young girl, but also brave. No keeping quiet for him; he is fully aware that he has the support of not just thousands of bhakt trolls but also ministers. They all went after Kaur, whose ‘crime’ was to openly say she was not afraid of the ABVP and declaring in a picture, whose message simply escaped the baying ultra-nationalists, that her army officer father was not killed by Pakistan but by war. Clearly, this was too evolved a message of peace for Hooda, cricketer Virender Sehwag and minister Kiren Rijiju to grasp. One BJP MP compared her to Dawood Ibrahim. Hooda has now said he was trying to be funny which everyone misunderstood. It seems he doesn’t even have the courage of his convictions.

The bigger issue here is not just the film industry’s well-known pusillanimity, the mockery that is staple fare on social media or indeed the hate speech of ministers and members of parliament. That is old hat. But these and other seemingly unrelated dots need to be connected to see what pattern is emerging – a robust effort to silence any point of view that challenges the officially approved one.

On television, where BJP spokespersons have made it a habit – it’s a well considered tactic – of speaking over other panelists, or on social media, where abuse and threats are hurled with abandon, or indeed student groups such as the ABVP, which use violence. Whether in JNU, Hyderabad or Allahabad, in Ramjas College and in Pune, the one common factor is the ABVP, whose tactics are blessed by not just the managements of the institutions but also powerful government figures. During the attack on students and faculty in Ramjas, the police stood by, letting the ABVP goons have their way. And once that subsided, they went after a young girl who stood up to this violence and emphatically said that she was not afraid of the ABVP.

It is often asked, why are the Sanghis so worried that the unity and integrity of this vast country could be threatened by a few students (idealistic and misguided, it is often added) raising slogans? Why not ignore them and let them have their say? But that misses the point. Picking on a Kanhaiya Kumar, an Umar Khalid or a Gurmehar Kaur is to make an example out of them and to tactically put a face to an abstract notion. Kumar may have been found ‘innocent’ by the police of the seditious act of shouting anti-India slogans, but to hardcore Sanghis and even fence-sitting bhakts now discovering their love for the nation, he and others like him will forever remain villains and traitors who represent the wider ‘anti-national’ element – seculars, leftists and those advocating peace with Pakistan.

During the height of the McCarthy era, when the FBI and its suspicious director J. Edgar Hoover were going after communists and other subversives, even those who talked of equal rights for blacks and liberalism in general. These values were considered “un-American,” a precursor to ‘anti-national’. From Martin Luther King to John Steinbeck and even Dorothy Parker, all were monitored closely for their alleged communist leanings. The same tradition – branding anyone who has a different, especially liberal, point of view as somehow not an Indian – is being followed by the Sanghi right wing here today. Some indulge in violence, others advance the cause a bit more subtly.

The BJP’s ‘acceptable’ urban face, Arun Jaitley, recently said that all kinds of “subversive” elements were getting together in the campuses and then went on to say that there should be curbs on freedom of speech if it endangers the “sovereignty of the nation”. Who decides if a speech endangers the sovereignty of the nation? A law already exists against those who propound violence. Is Jaitley proposing even tougher laws to go after slogan-raisers? Is the Sangh parivar getting the country prepared for harsher measures?

It is also often suggested by conspiracy theorists that the BJP and its sister organisations always create a diversion whenever something important is about to happen – a crucial bill in parliament, a scandal or a crucial election where banging a patriotic drum can prove beneficial. While that may be a collateral objective and benefit, the grander plan – to impose the Hindutva vision and ideology on to the nation – does not need these reasons. It moves on regardless of what else it may or may not achieve. Even without the UP election, the ABVP’s strategy of capturing space in universities and shutting out others in every way would have continued.

From occupying the top chair in universities, research institutes and cultural bodies, to changing history books, planting people in key positions and even altering the names of roads, the goal is the same. The ABVP is one more weapon in the armoury.

But at the same time, there is a Shehla Rashid, a Kumar, a Khalid and now Kaur, students who are not afraid to stand up to this juggernaut. It is not surprising at all that an RSS ‘ideologue’ walks off a TV discussion when faced with an assertive Rashid or a minister tweets against Kaur. This kind of resistance unnerves them. The big names of the country – sportspersons, film stars, businessmen – may prefer to remain mute or even publicly applaud the powers that be, but not the students of Indian universities who have shown that they will not allow the ABVP to bulldoze its way into liberal campus spaces. This fight is only going to heat up. The ABVP has the intent, the resources and the backing of the powerful; but they are up against a resistance that won’t back down.