1959: The Year the Dalai Lama and Thousands of Tibetan Refugees Fled to Arunachal

The Dalai Lama’s exile was but the beginning of a huge movement of Tibetan refugees into India and today’s Arunachal Pradesh was at the heart of that story. 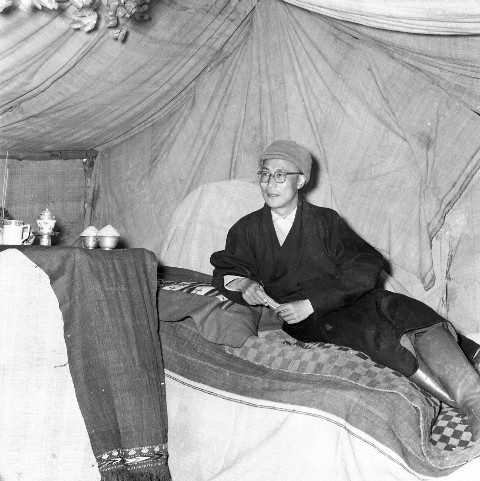 Dalai Lama after crossing the border in 1959. Credit: claudearpi.net

On March 31, 1959, the Dalai Lama fought his way through the snow to reach Chutangmu, a tiny Assam Rifles outpost near Tawang, to request asylum in India. Chinese troops were closing in on the Tibetan leader, clad in the weather-beaten clothes of a soldier yet instantly recognisable. Capture was only a matter of time. Forewarned, Indian authorities immediately gave him protection. Finally safe from the Chinese, the Dalai Lama slowly made his way down to Assam, surrounded by journalists and crowds of cheering inhabitants. A few weeks later, Nehru welcomed him in Mussoorie and formally offered him asylum.

Unsurprisingly, the Dalai Lama’s meeting last Sunday with the last surviving Assam Rifles who welcomed him at Chutangmu was an emotional one. The reunion will also strike a personal chord for thousands of Tibetan refugees across India, and for the Arunachalis and the North-East Frontier Agency (NEFA) officials who received them. For the Dalai Lama’s exile was but the beginning of a huge movement of Tibetan refugees into India. And today’s Arunachal Pradesh, then known as the NEFA, was at the heart of that story.

In March 1959, an uprising erupted in Lhasa against Chinese rule. Several regions of Tibet had already risen, but with mass rebellion engulfing the capital, the People’s Republic of China (PRC) intensified its repression. Within days of the Dalai Lama’s escape, thousands of Tibetans too were choosing the road of exile. For those in Lhasa and eastern Tibet, the shortest way to reach India was NEFA.

Refugees began to stream in through Tawang, the Brahmaputra Valley and dozens of other routes. They did not know they were entering one of India’s most sparsely administered regions. The small NEFA administration was always overstretched. As for the Assam Rifles who manned the checkposts, many had been diverted to the Naga hills. The refugee flow turned into a major humanitarian, administrative and security crisis.

Assam Rifles checkposts could not blindly welcome refugees. Letting them in would further deteriorate India’s relations with China. Some of the refugees were former guerrilla fighters, who needed to be disarmed. There was also the fear, as the flow of arrivals intensified, that PRC spies might be in their midst.

Nevertheless, most refugees were eventually welcomed in. Among them was Kunga Samten Dewatshang, a freedom fighter who had played a key role in the Dalai Lama’s escape. By June 1959, NEFA’s Kameng Division alone hosted more than 8,000 refugees, and there were many more elsewhere in the Agency.

The question was how to help them. The situation was nearly overwhelming, yet frontier officials were not inexperienced. India had built much relief and rehabilitation experience after Partition, and frontier officials had conducted extensive relief in NEFA after the 1950 Assam earthquake.

The most pressing need was to feed the refugees, hundreds of whom were camping in the open around Tawang. Authorities organised distributions of tsampa (the roasted barley flour that is a mainstay of Tibetan cuisine) and sent planes to airdrop food and essentials.

Shelter was the next priority. NEFA officials arranged transport for women, children and the disabled, and built temporary transit camps along the road. By the time the Dewatshang family reached Bomdila, houses had been built for them and refugee camps were organised at Missamari or Bhalukpong, in Assam. These soon filled up, however, and the plains’ climate and living conditions were bewildering to Tibetans. Measles, cholera and malnutrition spread.

NEFA officials changed tactics. Instead of sending refugees to the plains, they dispersed them across the Himalayas. Some, like the Dewatshang family, re-established themselves as traders. Others joined government crafts production schemes, or became restaurant owners in the towns that were appearing in NEFA at the time, like Bomdila. The less fortunate were assigned to road-work, for which Border Road Camps sprung up across NEFA. Life there was difficult, just like at Bhalukpong.

The presence of Tibetan refugees had some silver linings for NEFA authorities. Sino-Indian relations had collapsed, and Delhi now intended to concretise its boundary with China. The goal was not just to push the India army up to the McMahon Line, but also to limit people’s interactions across the Indo-Tibetan border. The refugees’ cultural and artisanal know-how could be used to produce goods (such as beads and ornaments, metal utensils, or garments) that NEFA’s inhabitants had once bought from Tibet.

Three years later, a still greater crisis erupted: China invaded NEFA. The 1962 Sino-Indian War turned into another humanitarian emergency. With Chinese troops occupying northern NEFA (they stayed in Tawang until January 1963), Tibetan refugees went on the road again. Many NEFA inhabitants joined them. While locals eventually went home, most Tibetan refugees did not return when the conflict ended. There were tensions with local inhabitants, and Indian authorities now considered Tibetan refugees too big a security threat. Some men, however, joined the new Indo-Tibetan Border Police, created in October 1962 in the midst of the war to defend the border they had crossed into exile just a few years before.

Today, only a minority of Tibetan refugees still lives in Arunachal Pradesh. The majority are scattered across India, and the Dalai Lama and his Tibetan Government-in-Exile have made Dharamsala their residence. But for them and veterans of the NEFA administration, memories of 1959 linger.

Bérénice Guyot-Réchard is the author of Shadow States: India, China and the Himalayas, 1910-1962, now in Indian libraries.