The militant Hindutva leader also administered an oath at the Haridwar Dharam Sansad which called for the killing of 'enemies of Hinduism'.

Between December 17 and 19, a large collection of major religious leaders, right-wing activists, hardline fundamentalist militants and Hindutva organisations came together at Haridwar for an event called the ‘Dharma Sansad’ or ‘Religious Parliament’. Over the course of three days, this event witnessed an extraordinary quantity of hate speech, mobilisations to violence and anti-Muslim sentiment. The event was also attended by BJP leader Ashwini Upadhyay, who has previously been arrested for an event he helped organise where slogans were raised calling for violence against Muslims, and BJP Mahila Morcha leader Udita Tyagi, giving the event a level of political encouragement from the ruling party.

New Delhi: Militant Hindutva leader Yati Narsinghanand Giri (formerly Saraswati), one of the leading organisers of the Dharam Sansad held recently at Haridwar, is known for making inflammatory statements and getting away with it. At the event, he spoke with the confidence of a man who knows the authorities will not touch him.

Narasinghanand’s first Dharam Sansad was held in January 2020, just ahead of the Delhi assembly elections and the subsequent communal riots in northeast Delhi in February 2020. The Haridwar Sansad too seems timed to coincide with polls in Uttarakhand.

On December 19, he got up from his seat on the stage and interrupted a speaker who was mid-way through a diatribe against Muslims performing namaaz in public spaces, to say: “When we needed help, the Hindu community did not help us. But if any youth worker is prepared to become the Hindu Prabhakaran, then before anyone else, I will give him Rs 1 crore… if anyone takes on the responsibility to become the Prabhakaran of the Hindus, I will give Rs 1 crore, and if he continues for one year, I will raise at least Rs 100 crore to give.”

Narsinghanand was referring to Velupillai Prabhakaran, the founder and leader of the Liberation Tigers of Tamil Eelam (LTTE), an armed organisation, banned in India, that sought an independent state for Sri Lankan Tamils. Prabhakaran and the LTTE were responsible for the death of former Indian prime minister Rajiv Gandhi.

Narsinghanand’s call for a large scale violent militant movement for the ‘protection’ of Hinduism, citing the non-existent threat of India becoming a ‘Muslim state’ under sharia law, is the first time he has so publicly offered a reward for those taking up arms. But it is not the first time he has called for violence.

At the same event, in an interview to Sudarshan News, a channel noted for its amplification of anti-Muslim hate speech and pro-BJP propaganda, he elaborated on this theme, saying: “This is our second Dharm Sansad. Our message is this that India, which is speedily becoming an Islamic state, should quickly be reversed, and it should become a Sanatan Vedic Rashtra.”

In the interview, he was joined by Swami Darshan Bharti, a long-standing proponent of the Hindu right’s claims regarding ‘love jihad’ and ‘land jihad’ – bogeys that target the Muslim community. Bharti called for Muslims to be disallowed from purchasing land in Uttarakhand – an issue which has led to a probe by the Uttarakhand government to ‘check land dealings’ after Ajendra Ajay, a BJP MLA, wrote a letter alleging rampant ‘land jihad’ in the state.

Narsinghanand said, “Swami Darshan Bharti has given his life for the protection of religion. He has made Uttarakhand rajya, and in Uttarkhand rajya, over the past five years, nobody has been allowed to make a masjid, madrasa or mazar. A warrior like this has our support always.” 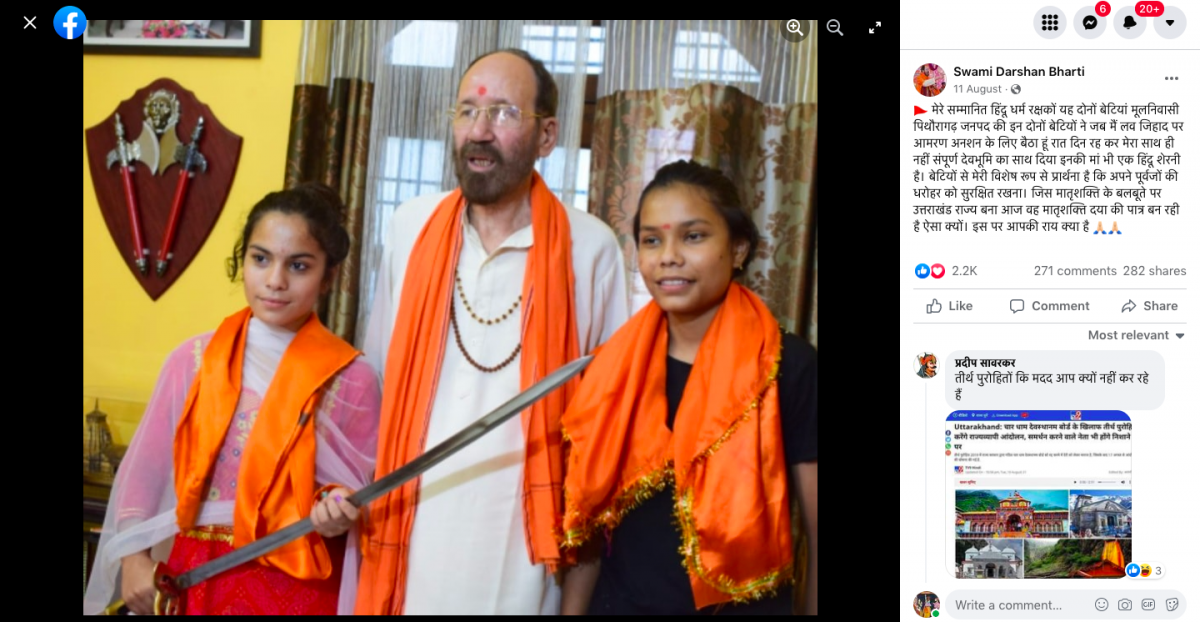 Swami Darshan Bharti stands with two young girls, one of which is holding a sword. Photo : Facebook

Along with Prabhakaran, Narsinghanand curiously refers to two leaders of the Khalistani separatist movement – Jarnail Singh Bhindranwale and Shabeg Singh. The latter was Bhindranwale’s military advisor and was previously involved extensively in the creation of the ‘Mukti Bahini’, the guerilla resistance movement in Bangladesh during the 1971 war.

Though Narsinghanand is explicitly calling for violent action that has historically been considered ‘terrorism’ by the state, the local police nor any Central law enforcement agency have booked him. The clip also featured Narsinghanand leading the slogan ‘Shastrameva Jayate’, transforming the iconic Satyameva Jayate (Truth alone triumphs) into a call for violence – “Weapons alone triumph.”

A video hosted by the channel ‘Sanatan Ke Rakhwale’ featuring the conversation transcribed above. In case this video is removed, The Wire retains an archival copy.

While he uses shorthand here to signal a call to violence, he has previously elaborated on the subject at length. In an interview in late October to Ajeet Bharti, a YouYube influencer who operates the channel ‘DO Politics’, which has 439k subscribers, he said:

“My fight with Islam is not just of this lifetime. It’s not that by coincidence, a boy was born in 1971, his parents named him Deepak, Deependra Narayan, he became a priest and started to fight Islam. My fight has not begun from 1971, it’s from lifetimes ago and will continue after my life. This is a fight of darkness and light. I am a representative of light – they represent darkness… even if one diya is burning, there is hope. But the truth is that the fight is difficult, crores of people will have to be killed, but Hindus are not in that mindset. There is no fear of sacrifice. It is only with sacrifice that a community will stand together. To make a community stand together its scholars, its preachers, and politics will not have as much of a hand as much as those who will die for their community as martyrs.

It will be the fruit of many lifetimes if I have the opportunity to make this sacrifice. The opportunity for martyrdom which Nathuram Godse, Kamlesh Tiwari were given, to these the greatest men. To Haqiqat Rai. These great men got their opportunity, and if I do as well, it will be a matter of great pride. But look at the state of things today – how many Hindus are willing to die for their religion? At this point, they are not even willing to fight!”

This video, which sounds eerily familiar to the ideology espoused by suicide bombers, has since been removed by the host.

It was made months before Narsinghanand’s latest call to militant violence with a reward attached.

On December 19 at the Dharm Sansad, Narsinghanand then led the congregation to take an oath, which said, “All of you raise your hands and repeat after me. I, *your name*, here on the banks of the Ganga, I take this vow, for Sanatan Dharm for my family, to keep my sisters and daughters protected. Anything in the world, whatever problems, whatever person, even thinks about causing loss to my religion, my family and my children, my women, I will not let him live. We will live for our religion. We will die for our religion. Islam’s jihad will be finished. Long live Sanatan Dharm. May the enemies of Sanatan be destroyed.”