With Call for Violence Against Muslims at Burari, Yati Narsinghanand Violates Bail Conditions

The organisers of the Burari event, Preet Singh and Pinky Chaudhary, have both previously been arrested for hate speech. 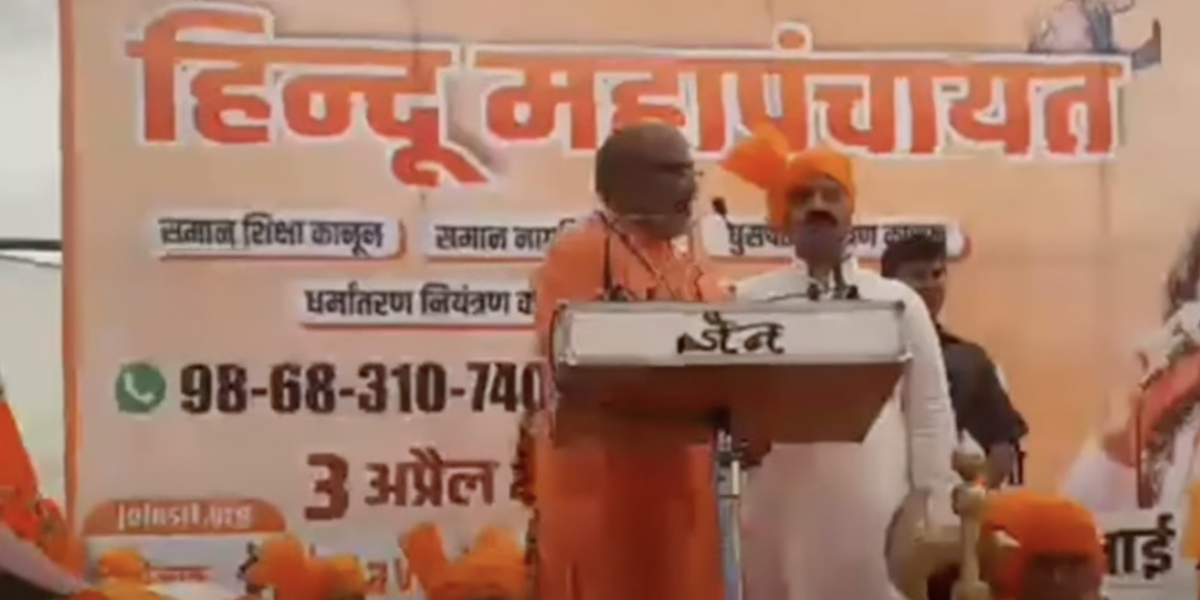 New Delhi: On April 3, 2022, a Hindu Mahapanchayat was held at North Delhi’s Burari grounds, where at least five journalists were allegedly assaulted in the process of covering the event. The organisers of the event, Preet Singh and Pinky Chaudhary, have both previously been arrested for hate speech for an event organised in August 2021 at Jantar Mantar, where slogans calling for violence against Muslims were raised.

In the same vein as both the Jantar Mantar event and the more recent Haridwar ‘Dharma Sansad’ in December 2021, the participants featured well-known personalities of the militant Hindutva ecosystem as well as high-profile mainstream priests, and the presence of hate speech amounting to calls for genocide. The event also featured Yati Narsinghanand and Suresh Chavankhe, both of whom have recently been in the news for administering oaths to their respective congregations for a call to arms in ‘protection’ of the Hindu religion, which has been seen as a genocidal cry for violence against Muslims.

While The Quint reported that the event was denied permission by the police, the organisers had communicated to the publication that they intended to continue with the event regardless, and videos show an absence of police intervention when the event’s expected hate speech and calls to violence began.

Yati Narsinghanand, the organiser of the Haridwar Dharma Sansad, repeated the message for which he was arrested at the time, and made calls for violence against Muslims.

He said, “If a Muslim becomes the prime minister of India, in the next 20 years, 50% of all of you will change your religion…40% of Hindus will be murdered. Ten percent of Hindus will give their sisters and daughters to Muslims, will live in refugee camps or abroad. This is the future. If you want to change this future, then become men. Become men. Who is a man? He who has a weapon in his hand…The amount of man a woman bears for her husband and mangalsutra is the love a man bears for his weapons.”

He was also among a number of speakers who used The Kashmir Files as a communal tool. Narsinghanand said, “For those who don’t want Hindus and Muslims to fight, did you watch The Kashmir Files…they [Muslims] should leave their women and properties behind and drown in the Indian Ocean. You [Muslims] have only this path left.”

One of the cases for which Yati Narsinghanand was arrested pertained to a hate speech he made during the Haridwar assembly. When he was granted bail on February 9 (a little under two months ago), it was under certain conditions. The court asked him not to deliver any speech which can disrupt social harmony, and restrained Narsinghanand from becoming part of any group or event with an aim to create discord among different communities.

Sunday’s event, organised by a group previously under legal fire for hate speech, was organised to advocate for issues including “ghuspet niyantran” (intruder control), “dharmantran niyantran” (religious conversion control) and “devsthan mandir mukti” (freedom of Hindu temples). All of these operate as dogwhistles against Muslims.

The term ‘ghuspetia’ was used by Amit Shah while referring to ‘infiltrators’ left out of the Assam National Register of Citizens and presumed to be Muslim migrants from across the Bangladesh border. There has been recent violence against Muslims for ‘forced conversions’ on false pretexts, and Muslim traders have recently been expelled from Hindu temple events in Karnataka.

Also read: We ID’d Anti-Muslim Sloganeers at ‘The Kashmir Files’ Screenings. What We Found Won’t Surprise You.

Narsinghanand’s participation in this event also violates the order condition of not attending an event with the aim of creating discord among different communities. The fact that Muslim journalists were assaulted is also a testament to the disruption of ‘social harmony’ at the event.

No action has been taken again Narsinghanand thus far for violating his bail condition. However, according to PTI, an FIR has been registered against him and other speakers at the event for hate speech at the Mukherjee Nagar police station.

Narsinghanand has been linked with the BJP machinery in the past, saying on the record that Yogi Adityanath had intervened when he was to be booked under the Goonda Act, and ‘saved him’. Ghaziabad SSP Pawan Kumar who had recommended that he be booked under the Goonda Act has, as of April 2, 2022, been suspended; according to the additional chief secretary (information) Navneet Sehgal, this was done on Adityanath’s direction.

Yati Narsinghanand reveals why he has not been arrested yet. He says, “When Yogi ji got to know that some officers are imposing Goonda Act upon me, he scolded those officers and saved me”.
That’s why he wants Yogi ji to become PM in 2024. pic.twitter.com/UDzQJhZfHD

Sudarshan News editor Suresh Chavhanke, who took an oath in December along with dozens of supporters to be “ready to kill and get killed” for making India a Hindu nation, said at Burari on Sunday, “What answers will we give to our sons and daughters in the future? Our next generation will say that their uncles and grandfathers were cowards. They could have stopped it [the Islamisation of India] but they did not. They wrongly kept talking about equal rights for all. Only Hindus talk about equality while being a majority. This is our decency, but if it’s misconstrued for our weakness then we will have to renounce it.” He then asked the audience to talk instead about special rights for Hindus.

At the rally, a foot march to ‘reclaim the temple’ at Mathura was also announced.