Hindu ‘lion’ under attack from ‘wild dogs’, says RSS chief Mohan Bhagwat. ‘Hindu society does not kill pests, it only controls them.’

Washington: It was meant to be an event celebrating the true spirit and values of Hinduism but conspicuous at the venue of the World Hindu Congress were posters denouncing inter-faith marriages as “love jihad” and other pet themes of the RSS-VHP combine. There was even a poster questioning Sharmila Tagore’s marriage to the Mansoor Ali Khan Pataudi way back in 1969 and whether their son Saif Ali Khan will force his wife, Kareena Kapoor to convert to Islam.  One of the questions asked: Why did Tagore give Arabic names to her children?

The wall posters appeared under the heading “Interfaith Marriages: Silent Holocaust of Hindus.” Then there were messages about the present state of Hindu society as a “small soft laddoo” with a future vision being a “big hard laddoo” which is strongly bonded and cohesive and cannot be broken into pieces. 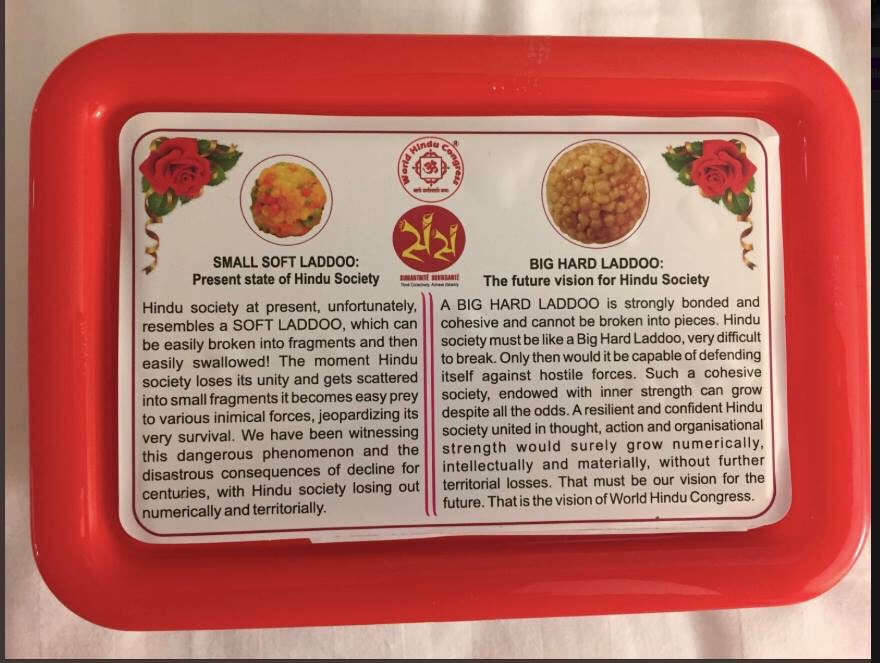 RSS chief Mohan Bhagwat, speaking in English on the theme of uniting all Hindus for a collective resurgence, said “wild dogs can invade and destroy” even a lion if he is alone, a remark that was interpreted by some as a veiled reference to the Sangh parivar narrative of Muslim invaders dominating and leaving their imprint on India.

Bhagwat said Hindus must not forget that even though they don’t have a desire for dominance, and that “our influence is not a result of conquest or colonisation,” they must come together for the betterment of humanity.

In the same speech, Bhagwat made a reference to pests and the use of pesticides in agriculture, adding that traditional Hindu agriculture practices merely “control” pests, not kill them.

“You have tried and failed, do not despair, take stock of the situation… You don’t have to react. Reaction doesn’t bring the correct things. And for Hindus, all their endeavors, they do not live to oppose anybody. You see, there are pesticides in agriculture. What do they do? They kill pests. But in traditional agriculture learnt by Hindu society, the pesticides cannot be called pesticides because they do not kill, they only control pests. Hindus recognise even the right of pests to live and make their life,” he said to rapturous applause.

That Bhagwat’s reference was not to pests of the agricultural variety became clear with his next few words:

“At the start we resolve we are not going to oppose anyone. But there are people who may oppose us… So you have to have all the instruments, apparatuses, data etc etc to control them – without hurting them, you have to take care they should not harm you.”

Were these “pests” the Sangh’s ideological opponents? Or India’s religious minorities? Or the Dalit and Adivasi communities who resist conscription in the Hindutva agenda? Certainly, the audience would have recognised in Bhagwat’s remarks an echo of the old RSS teachings on how minorities need to be “controlled” if they want to live in ‘Hindu India’.

Congressman Raja Krishnamoorthi was under tremendous pressure from activists to withdraw from the World Hindu Congress but instead of backing out he decided to take the bull by the horns and lecture the assembly about Hinduism’s inclusiveness and pluralism.

The first term Congressman, a practicing Hindu, told the gathering of Hindutva supporters that he believed only in “the highest and only form of Hinduism… one that welcomes all people, embraces all people and accepts all people regardless of their faith. I reject all other forms. In short, I reaffirm the teachings of Swami Vivekananda.”

By attending the event and delivering a message that he thought the organisers might not like, the young Krishnamoorthi clearly hoped to seal his support among both Hindu and Muslim constituents. The WHC is being held in Lombard, a suburb of Chicago, which is firmly in his congressional district. Krishnamoorthi apparently has one of the most diverse Indian American populations – upper caste and Dalit communities and Indian Muslims in almost equal measure. The distribution clearly made his task that much harder.

Had he withdrawn from a big event such as the WHC taking place in his constituency, he might have lost support among a large section of his voters. Had he attended and not addressed the concerns of his critics who include “caste oppressed migrants” – to quote an activist” and Muslim constituents, he would risk alienating them.

Krishnamoorthi wrote a frank e-mail to the Illinois Muslim Civic Coalition after a conference call, telling them he planned to talk about the “tenets of ahimsa, dharma and bhakti” – key lessons from Hinduism that he has used to conduct his personal and public life. He said he planned to welcome the 3,000 or so delegates of the WHC to show “what is possible for members of a minority religion in a country that values pluralism.”

A copy of his e-mail was seen by this correspondent.

A coalition of progressive groups rallying against the WHC as a gathering of “Hindu fascists” mounted a massive pressure campaign with hundreds of people e-mailing Krishnamoorthi to highlight the “shenanigans” of the RSS, VHP and related groups, an activist told this correspondent Thursday.

The activist accused Krishnamoorthi of speaking from “both sides of his mouth” because in the US he wants to protect religious rights but on foreign policy issues “his collaborators are Sangh-related organisations.” He apparently went “from mosque to mosque” during his election campaign to promise Muslims in his district that he would fight for them. “Little did they know he would advocate against them,” the activist said.

But Krishnamoorthi didn’t advocate against Muslims. Instead he went into the lion’s den and reminded the WHC delegates of  Vivekananda’s warning about the risk of division.  Quoting the swami, the Congressman said, “Sectarianism, bigotry and its horrible descendant, fanaticism have long possessed this beautiful earth. They have filled the earth with violence, drenched it often with human blood, destroyed civilization and sent whole nations to despair.”

Protests broke out in Chicago out during the sessions with activists shouting “RSS turn around, we don’t want you in town.” Police arrested two protesters and released them later with conference attendees shouting abuses at them, one even spitting at them.

A full-page advertisement in the Chicago Tribune, the area’s largest newspaper, exhorted the WHC not “to stain” the tradition of Hinduism being one of the most tolerant religions in the world. The ad was paid for by Avaaz, a global online activist network started in 2007 to bring together voices on climate change, human rights and animal rights.

The ad mainly talked about the Indian government’s plan to strip citizenship rights from millions of people in Assam. An Avaaz press release warned that it could create “the world’s next Rohingya-like crisis and be a permanent stain on Indian democracy.” Apparently 10,000 Avaaz members have already written to the UN Secretary General, asking him to intervene.

Speakers at the WHC have called the criticism “Hinduphobia.” Among those who spoke were the writer Amish Tripathi and actor Anupam Kher.