With CAB, India Has Taken a Decisive Step Towards the Sangh Parivar's Idea of a Nation

For long, the biggest roadblock for the Sangh and its vision was India itself. Not any more. It has buried the values of the republic now that it is in power. 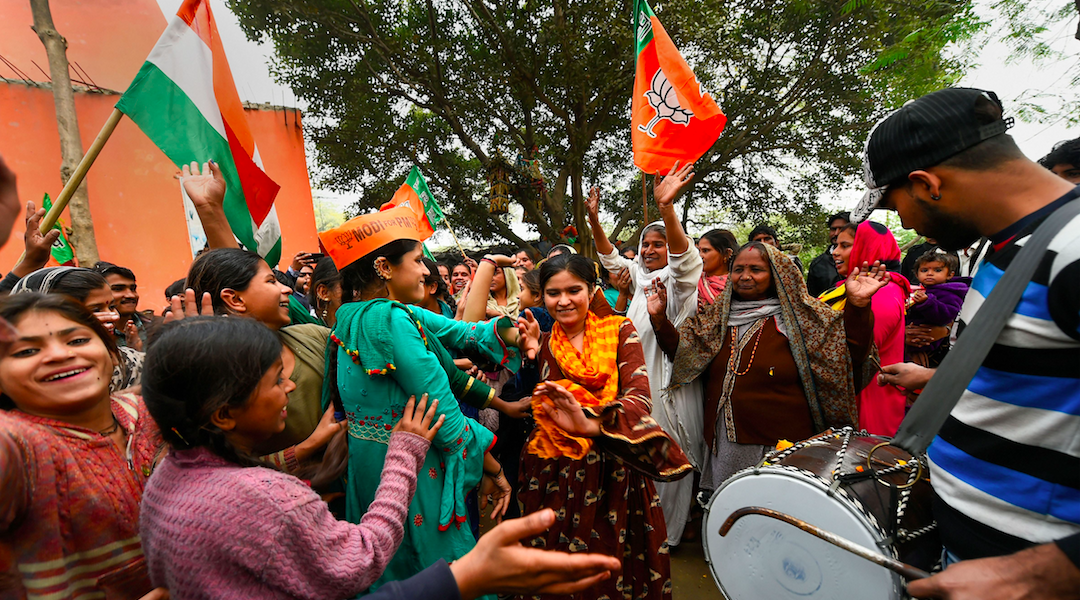 New Delhi: As ironic as it may seem, the Citizenship (Amendment) Bill (CAB) presented an opportunity for the opposition to agree with the Modi government’s position.

During the course of parliamentary debate on CAB, opposition leaders spoke at length about how the Union government was on its way to enact a law that would neutralise the impact of the National Register of Citizens (NRC) in Assam. It is evident by now that the Bill would indeed give a fighting chance to non-Muslims excluded from the final NRC to get Indian citizenship.

The Union home minister Amit Shah, however, contended that CAB should not be linked with NRC, and that the two had different purposes. While the latter was to identify illegal immigrants, CAB is to benefit non-Muslim refugees who seek permanent shelter in India.

Notwithstanding the Bill’s short-term political gains for the BJP, Shah may actually be right. CAB’s scope goes far beyond the NRC.

For all these years, the biggest roadblock for the BJP’s majoritarian political project was India itself. Despite all its caste and class contradictions, the nation’s founding fathers built a republic centred around modernist ideas of liberty and equality. The Indian Constitution envisioned a state that prohibits the government from discriminating or even viewing Indian citizens on the basis of their caste, creed, colour, or religion.

Within this prism of the Indian state, the Sangh parivar’s idea of a Hindu Rashtra had had to remain the misfit or at best a fringe political thought.

Not anymore. CAB upends those core republican values. Here is a government that used its executive and legislative powers to give legitimacy to a law that defines citizens by their religious identities.

Also read: The Citizenship Amendment Bill and NRC Will Together Destroy Our Country

For as long as the Sangh parivar or its political wing, the BJP, have existed, it has attempted to influence the social milieu with exactly this idea – that all Indian citizens were not equal and that Hindus should have the first right to all resources and constitutional offices.

The parivar has always believed that India is essentially a Hindu civilisation, while the rest of the communities which live here migrated from elsewhere. It has defined the Indian subcontinent’s civilisational ethos solely on the basis of religious, and caste, identities.

It considers Vedic age, and then the Gupta empire between the third and fifth century CE, as the last glorious periods of Indian history. For it, the medieval era is a period in which “Muslims” established their rule by “invading Bharat”. It also views Indian Christians as Hindus who were forcibly converted by missionaries in the colonial times. All such periods of history in which the state was led by non-Hindus are marked as an interruption.

While this is a view that professional historians have debunked multiple times, it did not matter much to the Sangh parivar. It has been happily living in a continuum of its own making, however stagnant and un-dynamic one may consider it.

Ever since the Rashtriya Swayamsevak Sangh pledged to stay outside politics — a precondition for the ban on it to be lifted — its political wings took up issues to adapt to the political milieu from time to time but never abandoned its core idea of a Hindu Rashtra. Not too long ago, it openly advocated a new Constitution for India. It attempted to portray India’s diverse, multicultural heritage as one which was built by overruling the Hindu opinion. 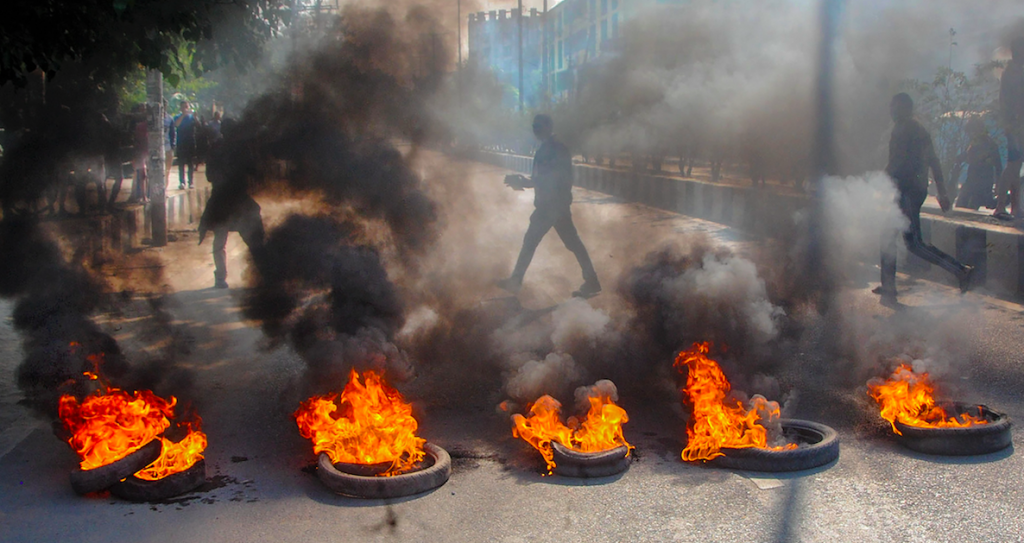 Demonstrators burn tyres during a strike called by All Assam Students’ Union (AASU) and the North East Students’ Organisation (NESO) in protest against the Citizenship Amendment Bill, in Guwahati. Photo: PTI

Yet, each time the BJP has been in power, coalition dharma prevented it from going the whole hog. The saffron party could never successfully circumvent those principles on which the Indian republic was founded. What it could do was trigger religious polarisation from time to time to firm its own political and ideological ground.

That ground has matured so much in current times that even when the Modi government successfully got the parliament to pass a law that sanctions religious identity as the primary determinant of citizenship, it is not being universally decried as an affront to the core values of the Indian republic.

The BJP should indeed be given some credit for picking up issues and leading such movements that creepily foreground the Hindu religious identity of India’s majority population at the epicentre of the polity.

From the Ram Janmabhoomi movement to the scrapping of Article 370 and the calls for a Universal Civil Code, all of these were issues that attempted to lead up to the Sangh parivar’s long-term goal — that of determining Indian citizenship through religious identities.

The NRC is yet another backhanded way for the BJP to do just that. Now that the BJP is in a position to command executive and legislative dominance, the Citizens’ Register has become the most important instrument for the BJP to bring in CAB, that is more in line with the long term ideals of the Sangh parivar. It knows that its politics of Hindu majoritarianism would be the natural beneficiary of such a definition of Indian citizenship.

We only need to look at how the BJP has spun the political narrative of CAB around giving asylum to “persecuted minorities” of neighbouring countries. Except, one may well ask why the CAB document does not mention “persecution” or “minorities” even once.

The three-page document simply mentions that “Hindus, Sikh, Buddhist, Jain Parsi or Christians” from “Afghanistan, Bangladesh or Pakistan” who are living in India from “31st day of December, 2014” will now be eligible to get Indian citizenship. Nothing more.

Yet, the BJP leadership has made CAB about giving relief to “persecuted minorities,” even though the Bill does not mention this intention at all. In fact, the previous draft of Citizenship (Amendment) Bill that got shelved did mention “minorities” but the word was dropped from the current Bill.

The opposition has rightly pointed out obvious questions. If this is the said intention, why were only three countries counted? If at all it is about minorities who have been persecuted, why were Sri Lanka, Myanmar, or China excluded?

If “persecution” was the criterion, then why leave out groups like Ahmadiyyas, Shias, anti-establishment bloggers, authors, dissenters, or even atheists? Or even if those excluded from the NRC somehow get citizenship through CAB, would it still not be an injustice to them? After all, a faulty NRC process did wrongfully exclude many from their natural citizenship.

Or more importantly, what was the need of the Bill when there were enough asylum laws and a stated refugee convention that India has followed for a long time. What more can the CAB achieve that the previous laws did not?

These are some questions that the Union home minister could not answer convincingly. Because he could not. Shah, a committed foot soldier of the Sangh parivar, perhaps does not bother with such questions.

Precisely for this reason, Shah’s explanation to the opposition question was simple: that the Bill was for a “specific purpose”.

Instead, his parliamentary speech sounded more like a dog whistle. He used the parliamentary forum to polarise Indian society on religious lines. Not only did he wrongly blame the Congress for India’s Partition on religious lines, he equated its criticism of the Bill with statements from Pakistani leaders. In what seemed like strange logic, BJP leaders alleged that opposition raising issues about CAB’s constitutional validity was an attempt at vote-bank politics.

These are arguments that the BJP has been making constantly over the last six years. Not once has its leadership responded to opposition’s questions without giving them a political spin.

Let us be clear. CAB is not merely about excluding Muslims. Most know that contrary to Shah’s contention, had the BJP been truly minority-friendly, Indian Muslims should have been better represented by the party. Instead, it has been openly campaigning against all forms of state-sponsored affirmative actions that were meant to uplift the minorities and the poor towards a dignified life.

Nor is the contention about Modi government’s large-heartedness, as the BJP is seeking to portray it. A large-hearted government does not conveniently include and exclude persecuted communities or groups for relief.

CAB is the first stepping stone for the Sangh parivar to alter India’s modernity, however enforced one may think it is. The Constitution may have little meaning for India’s vast majority which is conditioned to accept its most immediate (often self-serving) identity.

Yet, despite all their class and caste divisions, the Indian people grew up thinking that they were all equal before the law and in the eyes of the Indian state. However faulty that idea may have been, that is undoubtedly the last resort for the most marginalised to get any sort of justice.

That was the success of post-colonial India. That was also the success of the founding fathers and mothers who understood the natural contradictions of Indian society and yet hoped that the new republic would overcome them.

India had held its head high as a modern nation across the globe. By giving legislative sanction to the idea that citizenship can be determined by one’s religious identity, the BJP has opened a path for a complete overhaul of India. And it will show its impact on the ground sooner than later.