Why No Outcry from BJP or TV Anchors When I Was Attacked, Asks This Hindu Sadhu

Swami Agnivesh was attacked by a mob in Pakur, Jharkhand in July 2018 and the police later identified the attackers as men linked to the BJP. Two years on, however, the case has made little progress.

Screenshot of video that circulated on social media of Swami Agnivesh being attacked in Pakur, Jharkhand, in July 2018.

New Delhi: The recent mob lynching incident of Palghar led to a massive outcry on television and social media, particularly from Bharatiya Janata Party leaders, Hindutva activists and others associated with right-leaning ideologies. Their response has essentially revolved around the fact that two of three men killed were sadhus affiliated with an akhara in Varanasi. This fact was used by the BJP and a section of television anchors to communalise the incident, even though the attackers were adivasis – considered Hindus by the Sangh parivar – and there was not a single Muslim or Christian among those the police arrested.

The two sadhus, who bear the name ‘Giri’, were initially claimed by Gosavi nomadic tribal leaders as members of their community but Dainik Bhaskar has reported from Bhadohi in Uttar Pradesh that the older sadhu was the son of a Brahmin named Chintamani Tiwari. The Palghar police told The Wire they have no information about the identity of the deceased other than their names.

In July 2018, a horrific lynching incident of Gosavi tribals took place in Dhule, Maharashtra. But since the state was ruled by a BJP chief minister at the time, the Hindutva lobby did not make it a big issue. But now that a Shiv Sena-Congress-NCP coalition is ruling the state, the Palghar incident has been given not just a political colour but communal overtones too.

On Wednesday, another saffron-robed person who was brutally attacked by a mob in Jharkhand in July 2018 – Swami Agnivesh – released a video condemning the Palghar murders. He also drew attention to the system’s failure to punish those who had lynched Muslims like Akhlaq, Pehlu Khan and Junaid and then spoke about his own experience at the hands of a mob.

Agnivesh was badly beaten in a mob attack in Pakur, Jharkhand. The FIR registered by the local police identified eight of his attackers – all of whom were affiliated with the BJP, RSS and the Bharatiya Janata Yuva Morcha (BJYM), a youth group affiliated to the BJP.  Speaking to The Wire on Thursday Agnivesh said that even though the attackers were identified, the then Jharkhand government—led by Raghubar Das of the BJP — dragged its feet.

A month later, in August 2018, Agnivesh was again assaulted in public, allegedly by BJP workers, this time in Delhi near the BJP headquarters where he was headed to pay his respects to former prime minister Atal Bihari Vajpayee.

In September 2018, he asked the Supreme Court to club both cases of assault and hand the probe over to the Central Bureau of Investigation but a bench headed by Justice S.A. Bobde, now chief justice of India, refused to intervene.

Agnivesh, who is 81-years-old, has been facing severe health issues since the attack. The attack, he says, has left him battered, and has led to serious health complications, including a serious liver ailment.

“What happened in Palghar is condemnable. But the communal forces that tried to flare up the incident and give an entirely new twist to it by introducing the involvement of Muslims or Christian missionary groups needs to be condemned too,” he said in his video message.

Agnivesh also pointed to the cases of lynching of Muslims and those from the lower castes that were orchestrated in the name of “gourakhsa” by the highly violent cow vigilante groups. “Since the BJP and other right-wing activists are making so much noise. They should also answer why the killers of Akhlaq are not punished? Why has there been no justice in Junaid’s mob lynching case or in Pehlu Khan or Rizwan’s murder cases?” he asks. 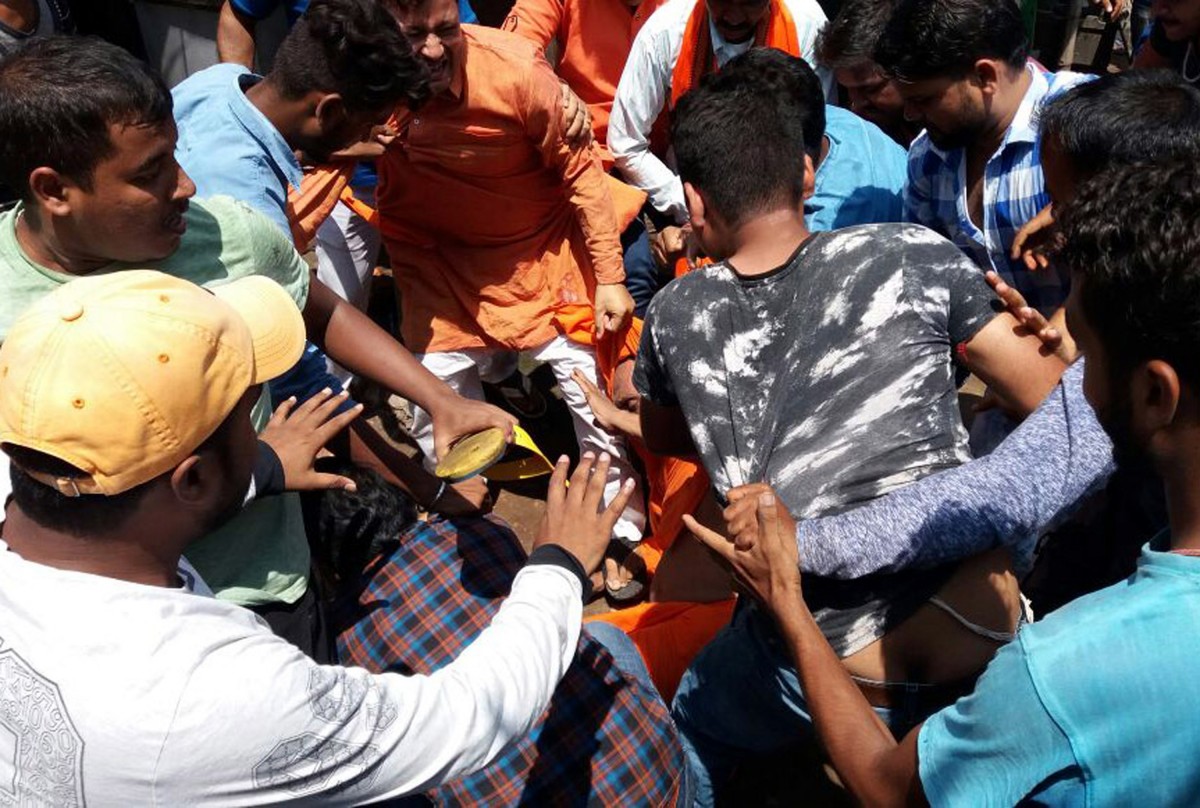 Screenshot of video that circulated on social media of Swami Agnivesh being attacked in Pakur, Jharkhand, in July 2018.

Although the then CM of Jharkhand Das had ordered an inquiry in the case of attack on Agnivesh, the investigation never moved ahead. The police registered a FIR against eight BJYM activists, including its district president, and a special investigation team was formed to probe the incident. Das had announced that the incident would be probed by the Santhal Pargana DIG and divisional commissioner. But the case has since been in cold storage, Agnivesh says.

Agnivesh had visited Pakur on July 17, 2018, to attend a programme concerning the Paharia tribe at the Littipara stadium. Just when he was leaving his hotel, a group of protesters began shouting slogans against him. The crowd soon got close to Agnivesh and some of them then assaulted him. He fell to the ground, his clothes were ripped and his turban pulled off.

That incident was filmed and videos of the incident circulated on several social media platforms. Agnivesh says no one bothered to support him although he too was in saffron robes. “I could have been killed in that attack… The prime minister did not feel compelled to condemn the act and till date no police or state government has bothered to investigate the matter,” he said. “No one can claim I was smuggling cows or was involved in slaughtering a cow. I was still attacked. Why did that happen?”

The assault on Agnivesh was reported by one of the channels that has made a campaign out of the Palghar incident, Republic TV, but it added the text “Maoist sympathiser” on its screen to describe the swami and called the attackers a “fringe group” when they were in fact all linked to the BJP in one way or the other. Its reporter also said that one of the reasons for the attack could have been the mob’s concerns that Agnivesh was involved with “Christian missionaries”.

It is not known if the channel’s editor, Arnab Goswami, had organised any prime time panel discussion on this 2018 attack on a Hindu sadhu. A YouTube search drew a blank.

In the Palghar incident of April 16, three persons—of which two were dressed in saffron robe—were murdered after being mistaken for “child abductors” and “thieves” by the local tribal community.

The deceased persons have been identified as 70-year-old Kalpvrush Giri and 35-year-old Sushil Giri, both affiliated to one ‘Shri Panch Dashnam  Juna Akhaara’ in Varanasi. Their driver, Nilesh Telgade, was killed too in the attack. In all, 110 persons, including nine juveniles, have been taken into custody and state home minister Anil Deshmukh decided to make all the names public in a desperate attempt to bust the BJP’s claim that it was a communal attack involving Muslims or Christians.

On April 22, Republic TV editor-in-chief Arnab Goswami was driving home in his motor car when he two motor-cycle borne men attempted to attack him. The accused have been identified as Prateek Mishra and Arun Borade, both office bearers of the Youth Congress in the Sion-Koliwada Assembly constituency. Mishra is the general secretary of the Sion-Koliwada Youth Congress and Borade is the president.

In a TV show earlier that day, Goswami had said that the Palghar murders were committed at the behest of Congress president Sonia Gandhi, whom he described as an “Italian” who had got “Hindu holy men killed:

“…That Italian Sonia Gandhi, who has come from Rome…she is silent today, it seems to me, that in her heart she must be delighted…she is happy that these holy men were killed in a state where she runs the government. She will send a report…I am saying this…she will send a report to Italy…I am saying this…(in the state) where I have made the government, I am getting Hindu holy men killed…and she will be applauded there (in Italy)…wonderful, child, wonderful, you’ve really done well, Sonia Gandhi Antonia Maino…”

Goswami’s remarks are now being investigated by the Mumbai police on a complaint of hate speech filed by a Congress minister.