Why Khagrabari's Ramena Khatun is Still Scared of Living at Home

Four years on, the trauma of one of the deadliest massacres in Assam by alleged Bodo rebels that claimed 42 lives, including 24 children, still haunts the survivors. 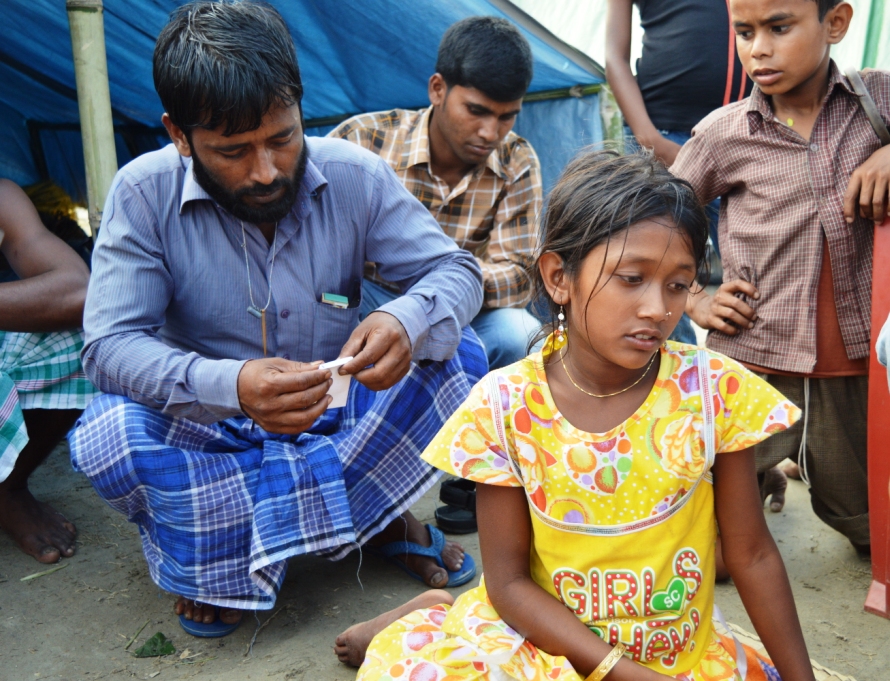 14-year old Ramena Khatun lost two siblings and her mother right in front of her eyes on May 2, 2014. Credit: Special Arrangement

Unlike hundreds of students of Adarsha Vidyalaya in Barpeta district in the north-eastern state of Assam, Ramena Khatun, a ninth standard student, doesn’t want to go home during holidays and summer breaks. Ramena lost her three siblings and mother in a gory incident on May 2, 2014 near her village in Khagrabari. In one of the deadliest mass killings in the recent past in this part of the country,  42 villagers were gunned down by armed militants belonging to National Democratic Front of Bodoland (NDFB).

As the incident completes the fourth year, the victims are still crying for justice.

“We seem to be the most unfortunate citizens in the country. My wife and children were killed for no reason. My neighbours were killed, but there’s no justice,” Ramzan Ali, Ramena’s father, told this writer on the fourth anniversary of the incident.

Sitting inside his newly constructed tin-roofed kutcha house in 10th Mile area in Baksa district, Ali said Ramena, 14 years-old now, couldn’t get over the ghastly incident that she witnessed. “I feel like crying but then I have no option. She (Ramena) doesn’t want to be at home. School is the best place for her as she can forget the past, at least temporarily. Once she is home, she starts behaving a little abnormally. During the last Bihu (a harvest festival) holidays, I had to send her to her aunt’s place.”

On May 2, 2014, the tiny non-cadastral village called Khagrabari in the foothills of the Himalayas in Baksa district was attacked by armed militants belonging to National Democratic Front of Bodoland (NDFB), allegedly in league with government forest guards. Only 57 families were living then in the picturesque village, surrounded on three sides by the greenery of UNESCO world heritage site Manas National Park and the river Beki, one of the major tributaries of the Brahmaputra.

However, Khagrabari turned into a killing field without any warning or provocation. “At around 3-3:30 p.m, militants started firing bullets at us from the western end of the village. We ran towards the forest guards’ camp in the eastern part of the village for protection. But instead of protecting us, they too started shooting at us. We jumped into the waters of Beki to survive,” recalls Ajiran Nessa (38) who survived the massacre but her five-year old daughter Majoni was among the 24 children who were killed.

The children who survived the massacre still carry the trauma and psychosocial effects of the brutality that they witnessed.  Ramena Khatun is one of those, and her nightmare continues to haunt her every day. Sharing graphic details of her ordeal, she said, “I jumped into the river along with my mother and four siblings. I saw bullets being aimed at us. I dived under-water and saw a bullet hit the water ahead of me. Another bullet hit my younger brother. I saw two of my younger brothers gasping for breath and drowning, when suddenly another bullet killed my mother who had to let go of them from her arm. I couldn’t save any one of them”.  She lost her mother and three siblings in the massacre.

The trauma Ramena has experienced has had a life-long impact on her. “I have more than 25 bighas (over four hectares) land in Khagrabari. But because of my daughter’s trauma, I shifted to this place and have abandoned my land,” said Ramzan Ali.

Even in the new place, around 25 kilometres from Khagrabari , Ramena doesn’t feel at home. She gets scared when she sees someone in khaki uniform or someone from the Bodo community. “Now she is asking me sell this house and get one near her school, which I can’t afford,” said her father. On the fourth anniversary of the Khagrabari massacre, victims and survivors gather at a memorial meeting demanding justice. Credit: Special Arrangement

No Justice So Far
On the fourth anniversary of one of the most horrifying massacres in Assam, the victims and survivors are still awaiting justice while the perpetrators are roaming free on bail. Initially, the case was registered and investigated by the Assam police, but later it was transferred to the National Investigation Agency (NIA) which specialises in terror and organised violence-related crimes.

When asked, Jasveer Singh, the investigating officer and Deputy Superintendent of Police with NIA said over phone, “We submitted the charge-sheet long back and now it is up to the court to decide the case”.

Aman Wadud, 32, a Guwahati-based lawyer and activist, who provides pro-bono legal services, applauded the courage and determination shown by the survivors and witnesses. However, he is concerned about the delay in the process. “As they say – justice delayed is justice denied. I sincerely hope that the trial gets over soon and the perpetrators get punished” he said.

Activists alleged that the Khagrabari massacre was one of the many mass killings that have been orchestrated with “absolute impunity” against marginalised communities like the Muslims and Adivasis in the present day Bodoland Territorial Area Districts (BTAD) region over the last three decades.

An international research project called Minority at Risk by the Centre for International Development and Conflict Management at University of Maryland, documented the series of violence meted out to Muslims and Adivasis in present day BTAD. Thousands of people from marginalised communities have been killed in the BTAD region since early 1990s.

BTAD is a privileged administrative arrangement made through a tripartite accord called Bodoland Territorial Council (BTC), signed in 2003 by rebel group, Bodo Liberation Tiger, the provincial government of Assam and the government of India under Sixth Schedule of Indian Constitution. One of the major objectives of the accord was to bring peace into the region. Though BTAD consists of only about 27% Bodos and the rest of the population includes Muslims, Adivasis, Asomiya Hindus, Koch-Rajbanshis, Bengali Hindus, Nepalis, etc, but 75% of the elected seats in the councils are reserved for Schedule Tribes, and approximately 90% of them are Bodo.

However, the BTC Accord couldn’t stop the recurrent violence. Instead, violence continued in the region with more intensity.

Shajahan Ali Ahmed, a student leader of the All Assam Minority Students Union (AAMSU), who helped the victims to organise a memorial meeting on the fourth anniversary of the Khagrabari Massacre, alleged that on many occasions, people from the marginalised communities had been subjected to mass violence.

Ramena Khatun’s father is one of the survivors of the 1994 Bashbari Massacre where internally displaced persons were killed and injured when suspected Bodo rebels attacked a government manned relief camp on banks of river Beki, around two kilometres from his house.

“Our villages were burnt to ashes and we were forced to take shelter in a temporary relief camp set up in the Bashbari High School. In the middle of the night, they (alleged members of the Bodo rebel group) set ablaze the school compound and stood near the doors with machetes, guns and other weapons. Those who were running out from the burning school were slaughtered. Fortunately, I along with my friend Haidor, were outside the camp and had a narrow escape”. At least 71 people were killed and over 100 were injured, but not a single perpetrator has been brought to justice, Ali said.

Justice P.C Phukan, a retired judge of Gauhati High Court, who was appointed by the government to chair a commission of inquiry into the ethnic violence of 2008 in Udalguri district of BTAD, said “even murder cases have been kept pending without any investigations for months without much breakthrough. I wonder whether the investigating officers made any inquiry at all in some of those cases.”

In 2012, more than 100 people were killed and over half a million people were displaced, most of them Muslims. Thousands of FIRs were filed but not a single perpetrator has been prosecuted for killing and driving out Muslims. A similar incident unfolded in 2014 where Ramena lost her mother and siblings.

Despite the Khagrabari case being investigated by a premier investigating agency like NIA with full participation of survivors and witnesses, justice has not been delivered. Can one then blame Ramena’s father for almost giving up hope?