Ground Report: A Precarious Social Equilibrium Is Under Threat in Bengal's Malda

Changes in Malda point to larger political processes set in motion in the communally sensitive state since 2014. The Enayetpur meeting where bodies of workers killed in Bhadoi were being brought.

Malda (West Bengal): Under an overcast sky, thousands of women and men gathered at an open ground in the Enayetpur village near Malda’s Manikchak block last week. Bengal’s ruling Trinamool Congress (TMC) was presiding over a memorial meeting dedicated to nine migrant weavers from Malda, recently killed in blasts at a cracker factory in Uttar Pradesh’s Bhadoi district.

Half an hour before the meeting, a heavy downpour filled large parts of the ground with mud and slush. But darkening skies and soggy grounds didn’t keep people from turning up in droves. Unfazed by warnings from the podium about the fragility of the building’s roof, people continued to climb up the ladder, hoping to catch a better glimpse of the dead bodies about to arrive.

This is an area whose predominantly Muslim inhabitants are dirt poor and hard pressed to find work in their own villages. A rising number of Malda’s labourers leave their families and move to different parts of the country in search of work – a trend prominent over the past two decades, and one that is showing no signs of reversal.

Over time, these migrant workers have acquired the skills to work at power transmission towers. “I work in the L&T tower in Bangalore,” says Menajul Ansari, from the nearby village of Nurpur. “Living conditions are tough in the city. Twenty to 50 to workers live in a room – sleep on the floor.”

Ansari is paid Rs 10,000 for working 10 hours a day. A chain of contractors and agents operate at various levels, at the villages and with companies which require a regular supply of labour. Such is the extent of migration that the Farakka Express leaving Malda railway station in the evening to ferry migrant workers to Delhi is popularly called the ‘labour express’.

Also read: A Year After Violence, Bengal’s Asansol Gears Up for Elections

Not surprisingly, given the proximity of Lok Sabha elections, the Enayetpur meeting acquired a political edge. The Congress, once a dominant political party and now a shadow of its former self, is accusing the TMC of playing politics over the workers’ deaths and their dead bodies. The fortunes of the party, which once held Malda in its thrall, primarily due to the legendary Congress leader Ghani Khan Choudhury, are now deeply uncertain. After the 2011 assembly polls brought the TMC to power with a huge majority, there has been a steady and unceasing list of defectors from the Congress to the TMC.

The latest on that list is Mausam Noor, niece of Ghani Khan Choudhury, the twice elected Congress MP from Malda North. My conversation with Mostaque Alam, one of the four present Congress legislators in the Bengal assembly, showed how cut up he is over Mausam’s decision to jump ship two months ago. One of the prominent faces on the podium at the Enayetpur meeting, Mamata Banerjee has declared Mausam as her party’s nominee from Malda North. 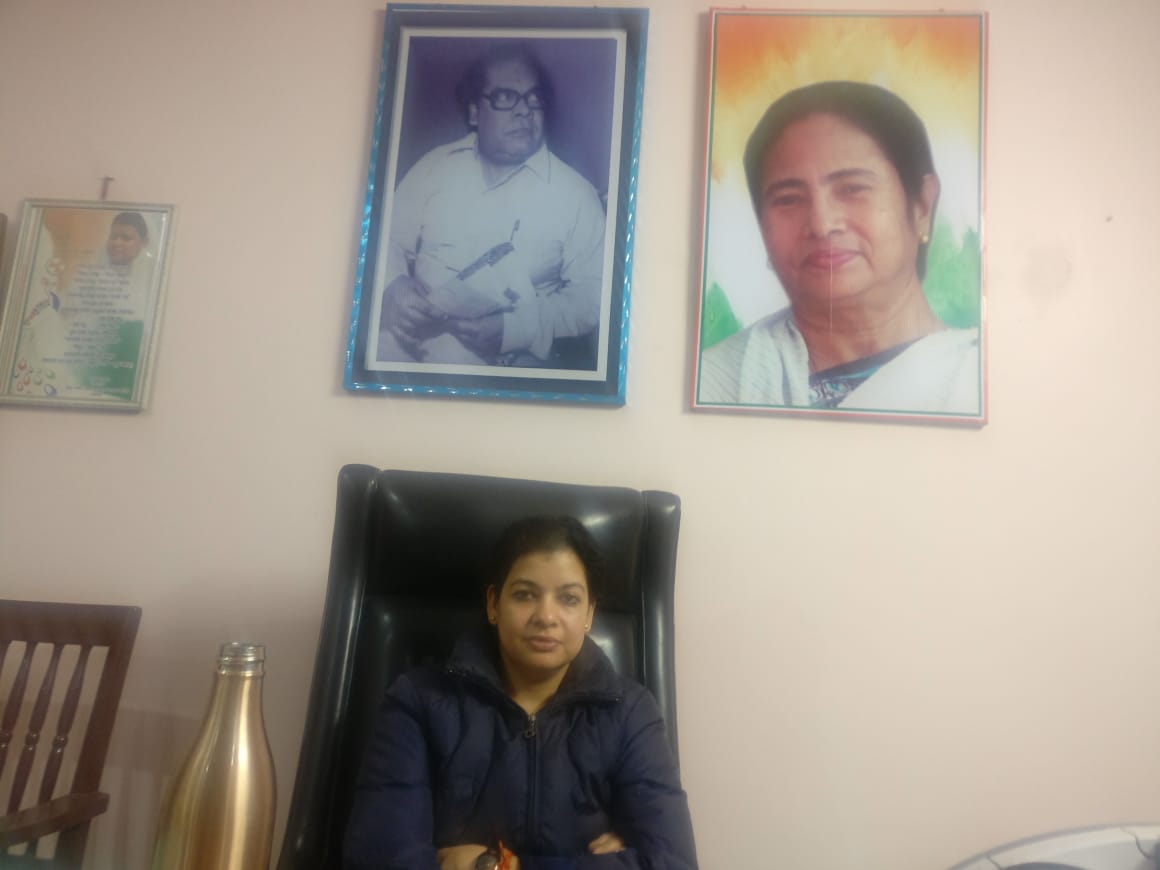 I met with Mausam at Ghani Khan Choudhury’s ancestral home in Kotwali, at some distance from Malda city. After Ghani Khan’s death and since Congress’s political fortunes waned, the Choudhury family members have gone their separate political ways. Several of them have joined the TMC. Few others have stayed with the Congress.

I asked Mausam, a lawyer at the Supreme Court till she chose to plunge headlong into politics, about the timing of her decision to quit the Congress.

“I cannot accept the BJP’s communal politics that I have seen in play during the past five years,” Mausam stressed. “TMC has taken a strong stand against the BJP. And I have repeatedly argued for a broad alliance against the BJP. In 2009 (Lok Sabha polls), the Congress allied with the TMC. In 2016 (assembly polls,) the party allied with the CPI(M).”

If the TMC fights alone, there is a big chance that the BJP may win, believes Mausam. “Currently, TMC has workers at every booth – which neither Congress nor BJP has. I believe if we are to defeat the BJP, we have to forge an alliance with other anti-BJP forces,” she said. A poster at Malda town square after Pulwama.

In recent days, after the Pulwama attack, Malda has witnessed a surge in BJP activities. The district seemed to teeter between jubilation and anxiety. Following the Modi government’s claims to have destroyed Jaish-e-Mohammad’s “biggest training camp” in Pakistan’s Balakot, celebrations broke out at the heart of Malda town.

Late that evening, bikers zoomed around, shouting slogans dedicated to ‘Vijay Divas (Day of Victory)’. Standing around tea stalls, people animatedly discussed the day’s developments. The town square flaunted several posters, some paying homage to the slain Central Reserve Police Force men in Pulwama, others lauding the government’s attack on terror camps inside Pakistan. Members of the minority community, too, took out rallies across the town, condemning the terror attack and calling for peace.

At the other end of the spectrum, a sense of anxiety hangs over much of the Muslim community. Some school and college teachers from told me how swiftly the already existing yet dormant suspicion of Muslims is now voiced in conversations in public spaces and on social media. In the present political and social context, putting a gloss on anti-Muslim sentiment is no longer considered necessary, they believe. There is an increasing feeling of social and political alienation among sections of Muslims.

Mohammed Rabiul Sheikh, who runs a textile shop in Malda’s Kaliachak area, said, “After the Narendra Modi government came to power, communal tensions went on the rise.” Today, Kaliachak is peaceful. Business is brisk. The rutted streets throng with people. But they still recall the violence leading to the torching of the local police station three years ago. On January 2, 2016, thousands of Muslims turned out in the streets to join a rally protesting derogatory remarks made by Kamlesh Tewary, a Hindu right-wing leader. The locals say the violence that subsequently unravelled was spurred by outsiders. The refurbished police station after it was vandalised in 2016 communal violence.

At the time, the BJP was quick to leverage the violence and blame chief minister Mamata Banerjee for “sheltering” Bangladeshi “infiltrators” – a talking point that the BJP president harped on in his recent rally at Malda. That the party is concentrating its resources in this district, where it hopes to perform well, was evident from the bustle in the party office in Malda town. I attended a noisy meeting in the central hall of the party office, which was established in 2002.

I was there to meet Sanjit Misra, BJP’s Malda president. He talked to me at length about the Rashtriya Swayamsevak Sangh’s deep roots in Malda and how the district has always had a special place on the RSS’s map. “The Sangh was in Malda from pre-Partition days,” he explained. Misra himself joined the RSS when he was a Class 8 school student.

Also read: Understanding Bengal’s Namasudras, Who Are Divided Between TMC and BJP

“I was in the military and participated in the Indo-Pak war of 1971.” Later, he joined the government’s postal department, quit his job in 2009 and become a full-timer for the party. Misra was in charge of Tripura’s present BJP chief minister Biplab Kumar Deb’s poll campaign last year. The BJP defeated the two-decade-old CPI(M) government, led ed by Manik Sarkar in this election.

Misra outlined the differences in the BJP’s state of poll preparedness in Malda between 2014 and now. “We were amateurs back in 2014. The party did not have any grassroots workers at that time. This time we are professional,” he emphasised, boasting of the new grounds the party has broken in Malda. “We will win both Malda North and Malda South constituencies.” He says there has been a paradigm shift in the BJP’s Bengal strategy. “Earlier, we we not working to win power. Now we want  power,” Misra explained.

Such claims and counter-claims aside, the deeper narrative in Malda draws attention to social and political processes that have been set in motion since 2014. Processes threatening to disrupt a tensely balanced social equilibrium in this communally sensitive state.

All images by Monobina Gupta.