The police standing guard did not move from their place, as if they had been ordered to remain mute spectators. 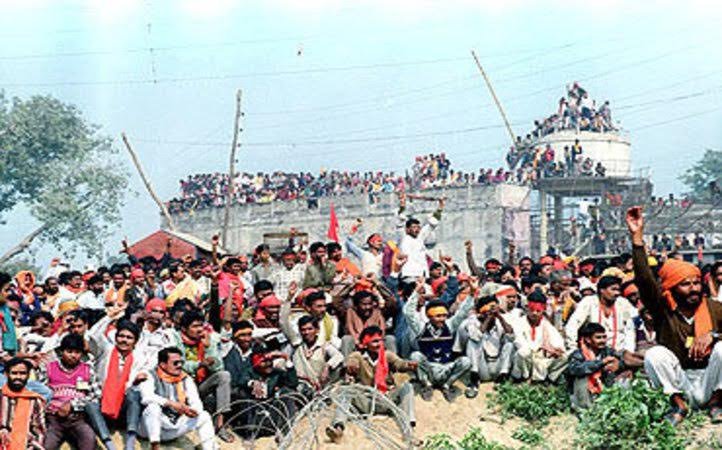 Karsevaks at the Babri Masjid on December 6, 1992. Credit: Reuters

There was a sense of foreboding that Sunday morning as we drove the six kilometres from Faizabad to Ayodhya for the “symbolic karseva” at the “disputed Babri Masjid/Ram janmaboomi shrine”. The portents were not good. Something terrible was going to happen but no one quite knew what it would be. But what ultimately happened on that black day shook the ground under our feet and its reverberations are still being felt after a quarter of a century.

Over the last three or four days, tens of thousands of “karsevaks” had descended on the small temple town till it looked like a sea of young men, brought from all over India by the Sangh parivar.

Ashok Singhal, the head of the Vishwa Hindu Parishad (VHP) and manager of the “symbolic karseva” had told journalists and the Supreme Court of India that there would be some singing of bhajans and a small yagna just outside the 2.77-acre disputed area of the mosque and its surrounding graveyard. But with the lakhs of karsevaks who had taken over Ayodhya, it looked more like a show of strength.

As per the orders of the courts, a couple of hundred state police and paramilitary personnel had been deputed at the site to protect the mosque. A contingent of the newly-formed Rapid Action Force was stationed just outside the town in case of any ‘untoward’ incident. Chief minister Kalyan Singh, BJP’s first ever chief minister, had promised the Supreme Court that no harm would come to the ‘disputed structure’ and the ‘status quo would be maintained’.

As usual, journalists were the first to arrive at the spot to find a vantage point for all the action. The mosque was empty barring the pujari of the Ram Lalla idol and a few policemen standing guard. Singhal and Vinay Katiyar, the president of the Bajarang Dal, looked busy preparing the area for yagna with some of the youths. BJP bigwigs L.K. Advani, Murli Manohar Joshi, Uma Bharti and others were in town and their arrival was awaited. Singhal gave journalists the meticulous plan of how the karsevaks would come to the yagna site in “jathas (groups)” from one side and leave from the other without entering the ‘disputed area’.

For a couple of hours there was very little activity. The lull turned out to be the proverbial calm before the storm. As the clock ticked and the auspicious time approached, we heard chants of ‘Jai Shri Ram’ get louder as the first jatha arrived. Suddenly, stones were hurled at reporters and photographers. Photographers had their cameras snatched and broken by the karsevaks. Others were luckier, they were threatened into not clicking any more pictures and their rolls of film were taken out and destroyed. In the melee that ensued, some of us were herded out of the yagna sthal and onto the terrace of Manas Bhavan, a temple that overlooked the Babri Masjid. Before entering the terrace, our bags were checked and notebooks, pens and cameras – the tools of our trade – were confiscated by the karsevak guards who were now running the show. Obviously they wanted no evidence of what they were going to do next.

Even as some of the photographers were still being attacked by karsevaks, another jatha came up to the wooden barricading protecting the mosque and began pushing and shaking it. The police standing guard did not move from their place, as if they had been ordered to remain mute spectators. A couple more jathas came from the other side of the lane and the fence was pushed down. Hundreds of karsevaks ran into the ‘disputed area’, shouting with joy, and began attacking the structure with bricks and stones.

At this point, as if on cue, the policemen and paramilitary who were stationed around the mosque filed out of ground zero and watched from the police control room at the side. The pujari was escorted out of the mosque carrying the idols of Ram Lalla by the policemen who were inside. And then there was mayhem.

Like a well-planned military operation, karsevaks carrying pickaxes, shovels, ropes and iron rods appeared from all sides and took control of the mosque. Some tried to clamber up the three domes. Finally the central dome was breached and a saffron flag was victoriously planted on top of the Babri Masjid. The karsevaks danced deliriously singing “Ram Lalla hum ayain hai, mandir yahin banayge (Ram Lalla we have come, the temple will be built here)” and “Musalman ka sirf ek sthan, Pakistan ya kabristan (There is only one place for Muslims, Pakistan of the graveyard)”. And then the real action of demolishing the mosque began.

Bharti, along with BJP leaders Advani, Joshi and a host of other hangers on, could be heard egging the mob on. “Ek dhakka aur do, Babri Masjid tod do (Give it another push, bring down the Babri mosque)” and “Yeh toh abhi jhankhi hai, Kashi aur Mathura baki hai (This is just the beginning, Kashi and Mathura are still left)” which had become her signature tunes during the run up to this day, could be heard screeching out of loudspeakers every now and then from the specially built watchtower where the leaders sat and celebrated.

For the next five hours, we watched the 400-year-old mosque pulled down brick by brick. While some pounded on the mosque from the outside, others attacked it from the inside. Though the mosque was old, its walls were thick and it would not give in easily. After about three hours of beating, pulling and pushing, at around 2:50 pm the first dome fell. About an hour later, at 3:40 pm, the second dome caved in and finally at 4:55 pm the central dome went down. There was no denying that some kind of explosives had been used, otherwise it was impossible to destroy this large a building in such a short span of time.

As dusk fell over Ayodhya, the Babri Masjid had been razed to a pile of rubble. The sun would never kiss its domes again. But the karsevaks weren’t finished yet. They worked through the night with the help of spotlights. Bulldozers flattened the ‘disputed area’. A small makeshift temple was erected with brick walls and a tarpaulin roof, as quickly as the masjid had been demolished. The idols of Ram Lalla were installed in the ‘temporary’ temple. Their job done, the karsevaks left Ayodhya, leaving a stunned nation to grapple with a problem which remains unsolved even after 25 years.

Sajeda Momin is a political journalist who has held senior positions in The Telegraph, The Asian Age, The Statesman, DNA and The Bengal Post. She is currently an independent writer who divides her time between India and the UK.