Vijaykant Chauhan celebrates the fact that his life's purpose – stopping 'love jihad' – is now supported by the police and government. Saharanpur (Uttar Pradesh): Vijaykant Chauhan, in his early 40s, wakes up alone every morning at 5 am. His room is simple, he says – and reiterates that a simple life is the best. He peeks out of the door and has a quick look at about a hundred cows standing just outside, in his gaushala, before he plans for the “busy” day ahead.

Besides working to stop “love jihad” in his home state, Uttar Pradesh, Chauhan runs a cow shelter called Pracheen Sidh Peeth Shri Shri Gau Devi Mandir Gaushala near Bharatmata Chauk Numaish Camp, Saharanpur. He spends hours collecting fodder for the cows, as well as carrying out an awareness campaign in the mornings, driving a tiny e-rickshaw. Inside the vehicle, he has installed a small temple.

This e-rickshaw is his “carrier” for six hours every morning, while he drives to at least 2,000 houses to collect fodder for the cows in his gaushala. “I begin my day seeing devoted Hindus donate fresh, good food for cows. After that, I start with my visits and other meetings,” he says.

Chauhan has been written about extensively before; he was even the subject of a near-5,000 words article in The Guardian in 2015 – soon after the Narendra Modi-led Bharatiya Janata Party government came to power in India. Given the extensive media coverage he has witnessed, one may expect smooth, polished responses from him. “But I am not here to please anybody. Muslims are oppressive, violent, aggressive,” he announces with conviction.

“Jab Muslim kam hote hain toh bhaichare ki baat karte hain, aur jab sankhya me zyada hote hain toh logon ko chara bana ke kha jaate hain (When Muslims are in a minority, they talk about brotherhood, but when they are the majority, they eat people like hay),” he adds. Chauhan’s thick moustache is reminiscent of how “Indians” are often depicted in Hollywood movies. Despite being an image of a macho Indian man – a heavy moustaches, dusky skin and a muscular body covered by army-print clothes – he is still unmarried and single. “This celibacy is for the cause of Hindutva…I anyway stay very busy with my work these days,” he explains.

Now, he is busier than ever – he has to make sure Muslim men are not able to marry Hindu women. Since The Uttar Pradesh Prohibition of Unlawful Conversion of Religion Ordinance, 2020, was passed, he even has the support of the police and the state government.

“I don’t have connections with any politicians. When one does good work with good intentions, everything falls into place,” he says.

In October 2020, chief minister Yogi Adityanath had issued a “warning” to those who “played with the honour” of “sisters and daughters” by allegedly concealing their identities. If they did not mend their ways, then their “Ram Naam Satya yatra (funeral processions)” would be taken out, he had said.

Chauhan’s mother lives in a mandir nearby. Only this week in UP’s Badaun, a 50-year-old woman was gangraped and murdered inside a temple. But he firmly believes the temple will keep his mother safe while he is on his mission to “safeguard Hindus”.

“I take care of thousands of holy cow mothers, I trust that some others must be taking care of my mother in the same way,” he says. His only brother is a sanyasi in Haridwar. He doesn’t remember the last time he met either of his family members.

He says that he is thankful to his mother, as well as his father who died in 2005, for making him a true Indian patriot. His grandparents, he says, had migrated to India during the India-Pakistan Partition of 1947.

“I heard stories about the cruelty with which Muslims were killing Hindus from my grandparents. From my parents, I heard stories about how Kashmiri Pandits were forced into exile because of Islamic radicalism. And now I myself am seeing these Muslim hooligans trying to trick our Hindu women into marrying them,” he says.

Chauhan has been a vocal supporter of Hindutva for at least 25 years, since he was just a teenager in his hometown, Saharanpur.

“I work from 5 am till midnight every day. There are a few like me who are completely dedicated to save Hindus, the rest have closed their eyes like pigeons…” he complains. His organisation, ‘Vande Mataram – Ek Chingari’ is based in Saharanpur. He is its only member.

He says that even though the mission has a nationwide presence, it is most active across UP. Being the only member in this organisation, Chauhan says, is difficult because he hardly finds any time to spend by himself.

But despite the difficulty, according to Chauhan, being a “one-man army” is satisfying. “My purpose is not to widen my organisation or make a name for myself, but to make people aware,” he adds. On July 4, 2004, he claims freedom fighter Bhagat Singh visited him in a dream, telling him to start this mission. “It was then that the former Saharanpur MP, Imran Masood, refused to say ‘Vande Mataram’. This is why I named it Vande Mataram,” he says.

When asked his profession, he said that it is to serve Hindus. But how does he run a gaushala, an ambulance and an e-rickshaw with no income? “Don’t ask me this, it is just god’s blessings,” he answers. He says that he spends at least Rs 4 lakh every month to run the gaushala alone.

The programmes run by his organisation include – cow protection, an event called ‘Ek shaam bharat mata ke naam, Ek shaam shaheedon ke naam’, an ambulance for injured cows, conducting last rites for deceased cows, driving an e-rickshaw to collect fodder for cows for several hours each morning, organising conferences on ‘love jihad’ for students in coaching centres and cyber cafes, and actively searching for and stopping cases of ‘love jihad’.

Until recently, ‘love jihad’ was not a term recognised by any legal system in India. It was coined by Sangh parivar outfits to describe an imaginary Muslim conspiracy to convert unsuspecting Hindu women to Islam.

Call Vande Mataram or the police

Part of his programme to increase awareness on the perils of ‘love jihad’ is to put up posters on vehicles with this message: “Hindu behen betiyon ki raksha va samman, Vande Mataram sena ka hai ye abhiyan…Hindu bankar, maathe par tilak laga kar, mandiron, computer centres, schools and colleges me, juice corners par mandarane waale jihadi (To protect the integrity of Hindu sisters and daughters is the objective of the Vande Mataram mission…from jihadis who pretend to be Hindus and wait at temples, computer centres, schools, etc.).” One such poster. Photo: Ismat Ara

One of the awareness drives he conducts in tuition and coaching centres for women is titled, “How to identify a love-jihadi?” where he apparently teaches young women how to identify, at one glance, those Muslim men who might befriend them with the intention to convert them to Islam.

He believes that “love jihad” is not a problem only in India, but internationally. In his view, this is India’s biggest hurdle as well as a rising issue worldwide.

“The problem arises in India because Hindus are innocent and easily get emotional and influenced by jihadis,” he says. He invariably refers to all Muslims as jihadis. He is a firm believer that Muslim men run a racket of changing their names to entrap innocent Hindu women with the intent to convert them.

At this point, he asks me, “Madam, what is your name again? It sounds like a Mohammaden name.”

“Sometimes, jihadis trap Hindu women, have physical relationships with them and record the act on their mobile phones. Later, they threaten our women to become Muslim and marry them,” he says. He insists that he is a single man with no manpower or financial security, no strong family background and no political alliances, and only one mission – to stop love jihad.

Another poster he has put up across Saharanpur predicts the downfall of jihadis. It reads, “If you wish for the safety of your sisters and daughters, and that you continue to live a dignified life – then focus on these four things from now: boycott anti-Indian [owned by Muslim men] salons and beauty parlours, don’t allow your daughters to go into beauty parlours run by men, check the mobiles phones of your sisters and daughters every single day, and keep a check on the maid that comes to your house, because she might be assisting some jihadi in doing black magic on our [Hindu] women.”

In the centre, written in bold white on a blue background, it says, “Gundo ke virudh awaaz uthayein, sandeh par police ko soochna dein (Raise your voice against hooligans, inform us or the police if you get any information),” with the numbers of 39 police stations across Saharanpur.

How he does it

For ten years, Chauhan said that he travelled across the country to raise awareness about the cause of stopping “love jihad” in the country. “During those drives, I would distribute my number everywhere. Slowly, I started getting calls from people who would tell me cases whenever they would happen,” he says. He is rejoicing now that the police are also cooperating with him. 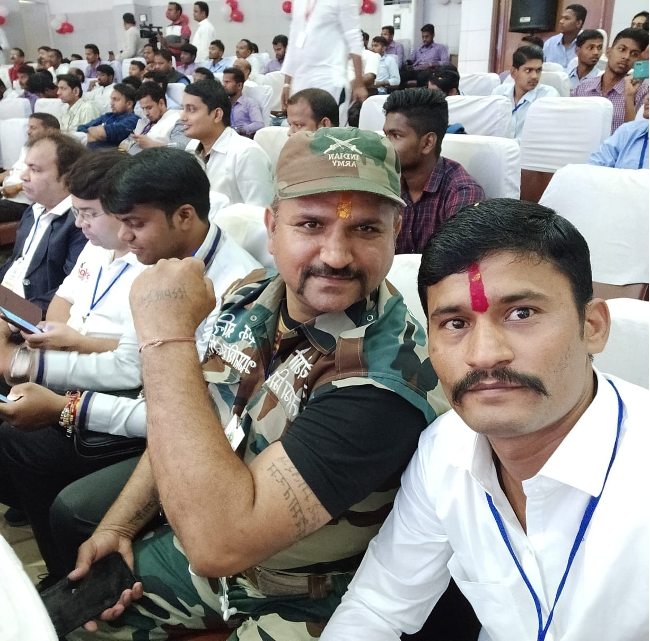 “Jo ek baar sampark me aa jaata hai, wo humesha ke liye saathi ban jaata hai humara (If somebody comes in contact with me once, he becomes my associate forever),” he says.

When he gets any leads on ‘love jihad’ marriages, he immediately goes to the location to get more details. “Within five minutes, I find out if the case is of forceful conversion of our Hindu women by these jihadis. I am saying this from experience, more than 99% of the cases are like that. In some, the girls don’t know that the boy is Muslim until we tell them. They have to be rescued,” he says.

He says that the police often help him in finding the Hindu girl if she has eloped with a Muslim boy to an unknown place by tracing the boy’s mobile phone.

“Once I rescued a girl in Hyderabad from a madrasa; she was reading the Quran inside. I stormed in, held her hand and brought her outside. She thanked me later for saving her,” he claims.

‘I was threatened, sent to jail for talking about Hindus’

Chauhan has been to jail multiple times, and has no regrets. “I have been to jail some 7-8 times,” he calmly tells me. “During the government of the Congress and Samajwadi Party in Uttar Pradesh, I have been threatened with death, sent to jail and locked up many times. I had to spend months in different jails three times under 153.”

Section 153 of the Indian Penal Code is ‘Promoting enmity between different groups on grounds of religion, race, place of birth, residence, language, etc., and doing acts prejudicial to maintenance of harmony’.