Unfortunately for Adityanath and Narendra Modi, the ‘80-20’ statement not only exposes the central role communal hatred plays for the BJP in elections but the actual election result has thrown up contrarian arithmetic. 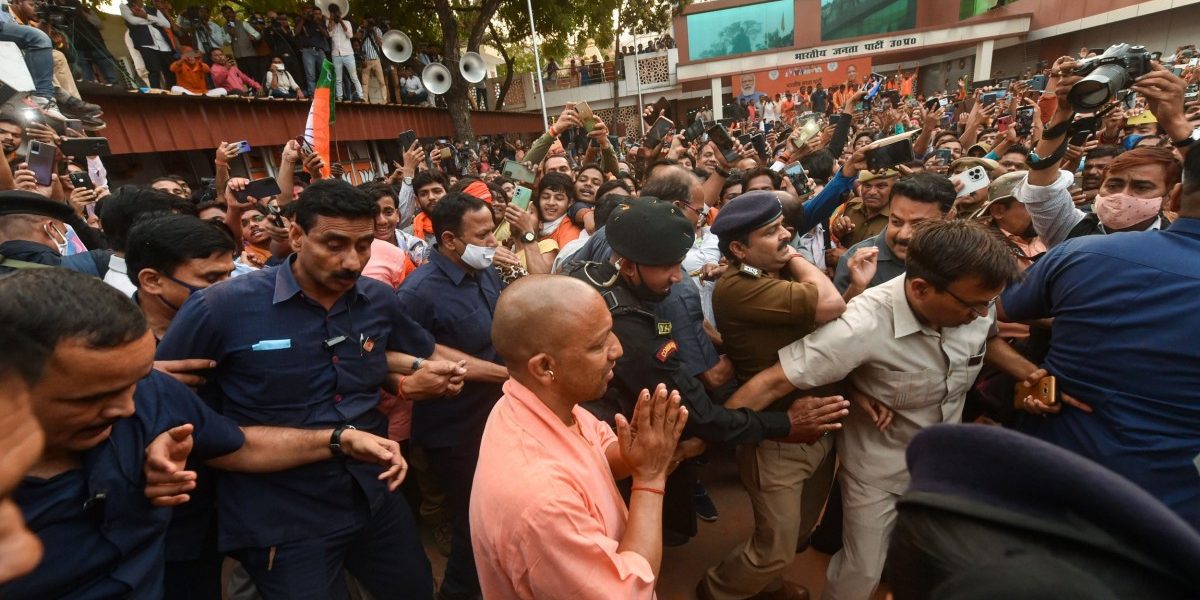 UP Chief Minister Yogi Adityanath greets the supporters as he arrives for a celebration after BJPs victory in UP Assembly polls at the party office, in Lucknow, Thursday, March 10, 2022. Photo: PTI/Nand Kumar

Analysts seeing in the Bharatiya Janata Party’s Uttar Pradesh victory a vindication of its welfarist policies conveniently duck the question of why leaders who apparently had such a compelling reason for re-election still had to make use of high-octane communalism to fuel their campaign. Chief minister Adityanath himself made dozens and dozens of speeches in which he actively sought to polarise the electorate on Hindu-Muslim lines. The apotheosis of this messaging was his promise – or threat – that UP was facing an 80-20 election:

“The 80% supporters will be on one side while 20% will be on the other. I think 80% will move forward with positive energy whereas 20% have always opposed and will oppose further.”

Though he was careful not to associate these percentages with Hindus and Muslims, the BJP’s activists and leaders down the Sangh parivar food chain understood him and reinforced this baiting of Muslims in speeches at rallies and smaller gatherings up and down the state.

Unfortunately for Adityanath and Narendra Modi, the ‘80-20’ statement not only exposes the central role communal hatred plays for the BJP in elections but the actual election result has thrown up contrarian arithmetic. The party has won a majority of seats but the party’s vote share, even when we add the votes of its smaller allies, is only around 45%. Given the battle lines on which this election was fought, it is fair to say the remaining 55% was an anti-BJP vote. Even though Amit Shah and Mayawati may have reached some sort of understanding, only a third of former BSP supporters who shifted allegiance went over to the BJP. Mayawati’s campaign was lacklustre but her messaging was still anti-BJP.

Just to be clear, the BJP will still rightfully form the government (just as others have done and will continue to do) under India’s first-past-the-post system. But any attempt to answer wider questions – what do UP’s voters think about the state government’s ‘bulldozer’ policies, Modi’s farm laws, the continuous polarisation of society on religious lines, the government’s handling of the pandemic – must use as a reference point the vote share metric which Adityanath had assumed would be 80-20 in his favour but which is actually 45-55 against him.

Also read: Only AAP Understands the Challenge Posed by BJP and Knows How to Fight It

The point I am making is not an academic one because the BJP will now cite the plurality of seats it has won as a license to double down on the very policies which 55% of the electorate refused to back. This means the space for oppositional politics remains wide open, and the sooner the BJP’s opponents shed their despondency over the results, the better.

Seen against the BJP’s ‘80-20’ goal, the ‘45-55’ results also offer a few specific rays of hope. Yes, communalism was the real engine of the BJP’s campaign and victory, and it is alarming that as many as 41.3% of those who voted were either not put off – or actively were influenced – by hate-mongering. And yet, the fact that Adityanath and Modi have not been able to grow this figure by more 1.5% in five years suggests the limits of communal politics may have been reached. It is reasonable to assume that most of the 63 million who did not vote – that’s 40% of the electorate – oppose, or have not bought into this communalism and were deterred from voting by a host of factors. That several BJP leaders who engaged in the most blatant bigotry lost their individual seats is also a good indication of the sewers of hatred reaching saturation levels.

None of this should be taken to mean the danger posed by the BJP’s communal and fascist propaganda and policies can be underestimated. Anti-Muslim bigotry remains a potent weapon in the hands of the party and its use is going to grow, not diminish, in the run up to the next Lok Sabha election. This is the implicit message that Modi is trying to convey when he speaks of the BJP’s win in UP paving the way for his re-election as prime minister in 2024. But the UP result is proof that there is plenty of fight left in the people of India.