Two lawyers, Ansar Indori and Mukesh, have been booked by the West Agartala police after they authored and released the report 'Humanity under attack in Tripura; #Muslim lives matter'. 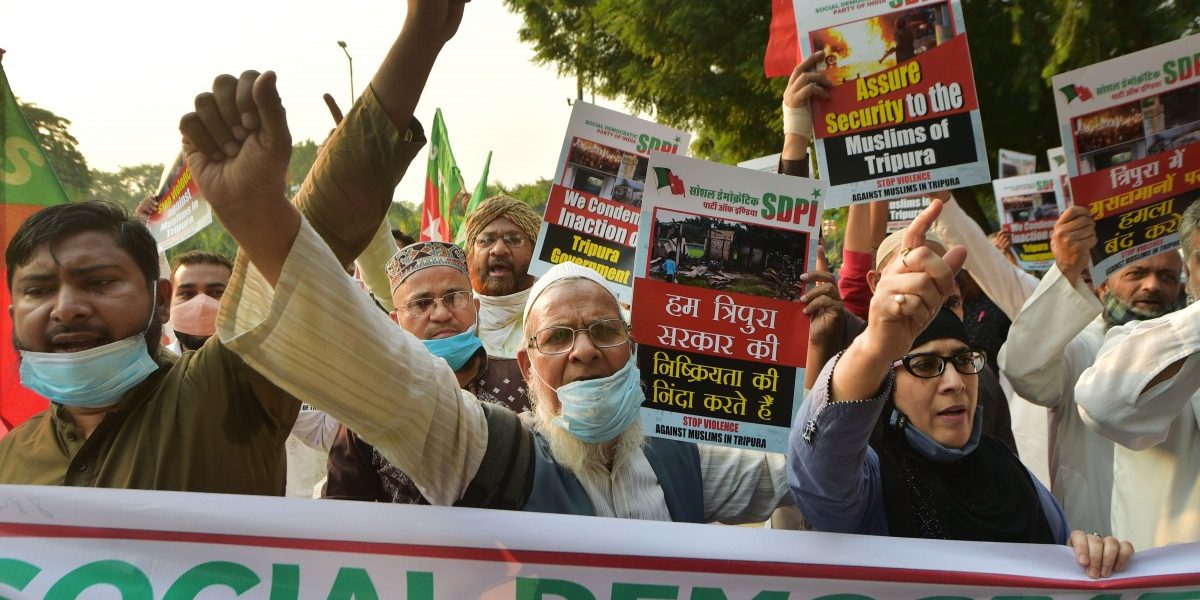 Members of the Social Democratic Party of India protest against the violence in Tripura outside Tripura Bhawan in New Delhi. Photo: PTI/ Ravi Choudhary.

New Delhi: A day after a fact-finding team released a report which highlighted anti-Muslim violence in the state of Tripura, two advocates who were a part of the team and had authored the report, Ansar Indori, secretary of the National Confederation of Human Rights and Mukesh, who works for the Union for Civil Liberties, have been charged with Section 13 of Unlawful Activities (Prevention) Act (UAPA).

The advocates were a part of a four-member fact finding team which had visited the state on October 29-30 in order to document the tensions in the region following reports of anti-Muslim violence in the state. The report, titled ‘Humanity under attack in Tripura; #Muslim lives matter’, documented the vandalisation of at least 12 mosques, nine shops and three houses belonging to Muslim families.

The notice of the case filed by officers of the West Agartala police station states that the charges levelled are “against the social media posts circulated by you/ statements made by you for promoting enmity between religious groups as well as provoking the people of different religious communities to cause beach of peace”.

Speaking to The Wire, advocate Mukesh, who has been served the notice, said, “We have been conducting fact finding reports for a long time now; to me, this is an absolute shocker, I don’t understand what has happened, we pointed out in our report as to how a society which was living in peace and harmony has become so volatile. We had, in fact, even credited some officers and the administration for handling some instances well.”

“I don’t even know until now as to what I have posted on social media which can amount to charges as serious as those levelled against me, moreover all my comments are available on public forums there is no design here or an attempt of conspiracy,” he added.

The report, co-authored by Supreme Court lawyers Ehtesham Hashmi and Amit Srivastav (who is on the coordination committee of Lawyers for Democracy) has highlighted that the latest violence was a “result of the irresponsibility of the administration” and “extremist organisations”.

The report said that right wing extremist organisations such as the Bajrang Dal, Vishwa Hindu Parishad and Hindu Jagaran Manch held protests and rallies after several Durga Puja pandals and temples in Bangladesh were vandalised on October 15, in a bid to evoke violence against the minority Muslim population of the state. The report also stated that, “During the rallies, Hindutva mobs raised slogans insulting Prophet Mohammad and copies of the Holy Quran were burnt by rioters while attacking mosques and Muslim houses.”

A senior Tripura police officer has reportedly told PTI  that the cases were filed for allegedly spreading rumours related to the recent anti-Muslim incidents in Tripura on social media.  The report also stated that, as per the preliminary probe, fake pictures and videos were uploaded to social media, purportedly in a bid to tarnish the image of the state government and the police.

The lawyers have been asked to immediately delete the posts mentioning the violence in Tripura from all social media platforms. They are slated to appear before the Agartala police on November 10.

Speaking to The Wire about the charges levelled against him, Indori said, “By pressing these charges, the state government is trying to hide its own incompetence. With what has happened in our case, it is clear that this is an attempt to curtail the truth from being shared with the mainstream. Moreover, this is an attempt to scare us into silence and muzzle our voices.”

Protests were held in 51 places in Tripura over instances of attacks on Hindu minorities in Bangladesh. The report released by the lawyers had also demanded the creation of an inquiry committee headed by a retired high court judge and had asked for immediate action against those who were responsible for vandalism and hate crimes against Muslims in the state.

With inputs from Vertika Tripathi, People’s Union for Civil Liberties.