To Find the Real Truths of Bharat, Let Us All Dig in Earnest

Not just Islamic monuments, but many Hindu structures too were built by destroying earlier structures. 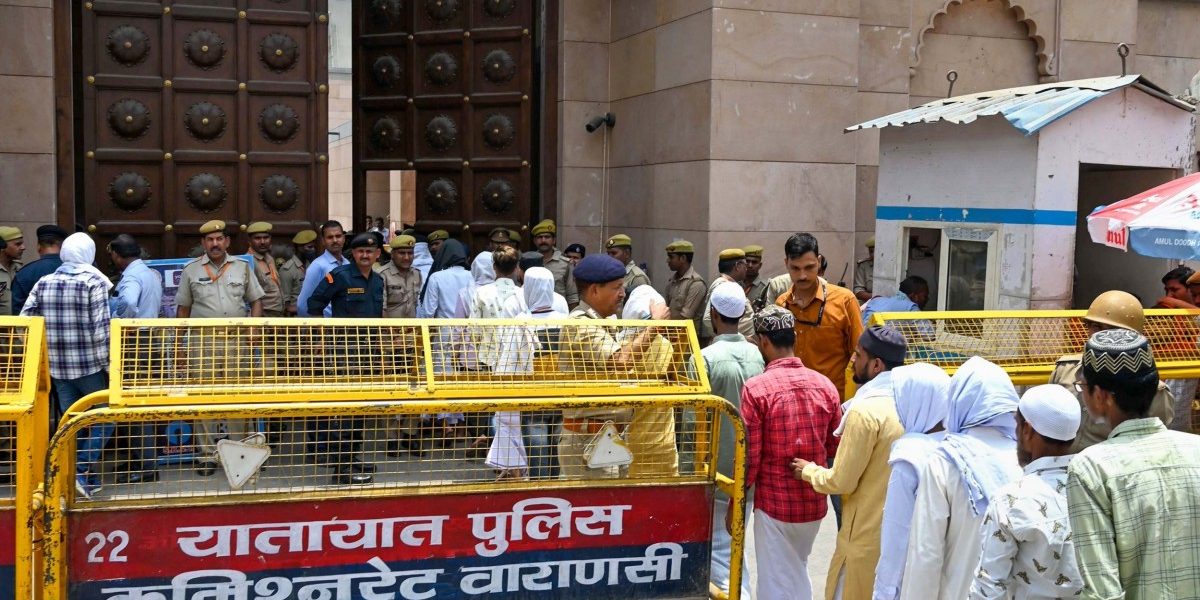 Security personnel stand guard as Muslims arrive in a large number at the Gyanvapi morsque to offer Friday prayers, in Varanasi, Friday, May 20, 2022. Photo: PTI

After Ayodhya, more mosques are in contention.

A dance of sophistry is underway around the elephant in the room.

Ergo, Indian Muslims are all converts. It is time for them now to full-throatedly denounce those who converted them, to do dirt on their doings (all of which were evil), and return to being full-blooded Hindus once again.

That simple requirement is sought to be projected as the collective desire of Hindus to find “the truth” through surveys and suchlike.

The so sanguine Justice Pradeep Nandrajog put it charmingly the other day on a primetime show; the truth, he said, is known to everybody. Places of worship were mauled by successive rulers across the board, not limited just to the wicked Aurangzeb.

It was his sagacious view therefore that it is the Places of Worship Act, 1991 which stands as the law on the day that must be observed in letter and spirit; as we know, that Act requires that all such structures whose religious status was settled as on August 15, 1947 must retain that character, and that no litigation may be entertained on the status of those religious places.

To put the matter as Jawahar Lal Nehru did in Discovery of India, of all nations with rich multi-layered civilisations, India is the richest “palimpsest”.

From the original Harappans and Adivasis to all those who came in subsequent centuries – Aryans, Greeks, Zorashtrians, Jews, African Sidhis, Christians, Muslims (who first arrived on the Malabar coast as early as the 8th century as traders), Mongols, Turks, older cultural parchments were partly effaced, partly overwritten, but never wholly lost to view and to the absorptive skein of Bharat. Look anywhere and you will find traces, objects, practices and linguistic convolutions that substantiate this accreted richness of India’s incomparably extensive multiplicity of cultures.

Also read: As Islamic Structures Are Targeted, Why Are Courts Ignoring the Places of Worship Act?

Where we have been used to celebrating this palimpsest nature of our land, enshrined as a guiding code in our Constitution, it is clear that the Hindutva right-wing now feels that what it has always wanted to do it may now do, namely to erase all traces of Muslim presence (believing they were the only ones who invaded India, the British only came to civilise us), and to establish the currency that just as the Chinese are, at bottom, all Han, Indians are all Hindus.

Since the call is for the “finding of truth” (sic), such a noble quest cannot be arbitrarily cabined, cribbed and confined just to alleged Islamic depredations, can it?

So, let us dig in earnest, and let the truth below the soil lead us where it will.

Many through the years have written to say that Hindu rulers who often in internecine wars vanquished other Hindu rulers then desecrated the latter’s temples in order both to loot and to replace the deities with their own deities from whose specific divinity these victorious rulers derived their temporal authority.

So, let us dig to see if there is truth in these widely recorded claims.

If there be, Vaishnavites might want to reclaim temples desecrated by the Shaivites, and vice versa. Why not, if truth be told and if truth be reinstated. Just as India’s original inhabitants, the Adivasis, meaning those who were here from times immemorial (and whom the right-wing nomenclatures Vanvasis, meaning jungle people, in order to obfuscate their claim to origination) might also justly want to dig the truth of how their deities were either decimated or incorporated into the Hindu pantheon without as much as a thank you.

Here indeed a lot of digging may be called for, given the extensive nature of depredations as recorded both by historians and, lo and behold, scions of the right-wing itself.

One of the most comprehensive studies of Hindu depredations wrought on Bodh Vihars and Buddhist Stupas is by the doyen of historians of ancient India, D.N, Jha, in his book Against the Grain: Identity, Intolerance, History.

Were we to set out to dig those claimed truths out for common sight, the enterprise might keep us going for quite some while; but why not, since the call is to find out the truth of things.

This seems especially incumbent on us to do given that averments by no less than a Swami Vivekananda, a Dayanad Saraswati, and even the super-nationlist Bankim Chander Chatterjee, endorse the claims made by dirty-minded secularists about the likely truth of some Hindu shrines.

Also read: In Today’s India, the Law Is Being Subverted to Create Social Unrest

“To any man who knows anything about Indian history, the temple of Jagannath is an old Buddhist temple. We took this and others over, and re-Hinduised them. We shall have to do many things like that yet” (Swami Vivekananda, ‘The Sages of India’ in The Complete Works of Swami Vivekananda, Advaita Ashram, Calcutta, Volume 3, page 264).

“For ten years he (Adi Shankarsacharya) toured all over the country, refuted Jainism, and advocated the Vedic religion. All the broken images that are nowadays dug out of the earth were broken in the time of Shankar, whilst those that are found whole here and there under the ground have been buried by the Jains for fear of their being broken by those who had renounced Jainism.” (Satyarth Prakash, chapter 11, page 347).

“I am aware that another and very reasonable account of the origin of the festival of Rath (at Jagannath temple) has been given by General Cunningham in his work on the Bhilsa Topes. He there traces it to a similar festival of the Buddhist in which the three symbols of the Buddhist faith, Buddha, Dhamma , and Sangha were drawn in a car in the same fashion and I believe about the same season as the Rath. It is a fact greatly in support of the theory that the images of Jagannath, Balaram, and Subhadra which now figure in the Rath are near copies of the representations of Buddha, Dhamma, and Sangha, and appear to have been modeled upon them.” (Bankim Chandra Chatterjee, On the Origin of the Hindu Festivals, in Essays and Letters, Rupa, Delhi, 2010, pages 8-9).

It is of course possible that demands for digging may come from other, less-thought-of quarters; but these too must be honoured since claims and suspicions cannot be any one segment’s propagated monopoly.

Emulating Mao, let us therefore dig in earnest to rediscover the truth of our culture; and if these reveal not culture but cultures, who can deny that truth to its multiple face?

This exercise of digging will have a two-fold yield: a sort of spiritual MGNREGA, it will both provide much-needed employment to young Indians now distraught for want of work and, simultaneously, provide rich food of the spiritual kind, as time will be spent among deities and gods in pursuit of the ultimate truth of Bharat.