'Our Three-year-Old Daughter Should Know What it Means to be Hindu, Right From her Childhood'

Organised by an offshoot of the Sanatan Sanstha, over 7,000 men and women attended a recent event in Pune that was aimed at evoking a strong pro-Hindutva sentiment, which in turn implied attacking Muslims, the government, the media and the liberals. Over 7,000 people from across Maharashtra attended the meeting on February 4. Women participated in large numbers. Credit: Sukanya Shantha

Pune: It was a little after 5:45 pm when Aarti Shegaonkar hurriedly entered the municipal school ground at Dhankawadi in Pune on February 4. Over 7,000 men and women had already gathered to attend the annual Hindu Dharmajagruti Sabha scheduled to begin “at 5:30 pm sharp” – as mentioned in their social media invite that had been floating around for a few weeks. The meeting had begun dot on time – it was an “auspicious” time decided on the basis of the Vedic panchang or calendar.

This was Shegaonkar and her family’s first time at the meeting for which they had excitedly travelled 40 km from the neighbouring Talegaon Dabhade city to Pune. An invite had reached them through WhatsApp, just like several others who had gathered there.

“How often do you get to meet like-minded people?” she said, as she made her way among other women who were already seated in a neatly arranged row on the floor. Meanwhile, her husband Vishwas had made some space in the packed “men’s section”, running parallel to the women’s seating area.

The evening’s event – a conference of sorts – was organised by the fringe right-wing group Hindu Janajagruti Samiti (HJS), established in 2002 by the “seekers of Sanatan Sanstha” –  as described on the organisation’s website – but essentially an offshoot of the parent group. “It is a special moment for us. We even got our three-year-old daughter along. She should know what it means to be a Hindu right from her childhood. Today’s kids are so directionless,” Shegaonkar complained, as she tried to pacify her daughter Jui who was getting restless due to all the commotion around.

Many first-timers like the Shegaonkars and “experts” of Hinduism had gathered in Pune to “meet and exchange ideas on Hinduism”, as one of the speakers, Priyanka Lone, described right at the beginning, setting the tone for the evening.

But as the evening progressed, the lectures and conversations slowly shifted from the organisation’s relatively benign spiritual teachings to more aggressive, even dangerous ones. From the basic lessons on how to be a “good Hindu” to a more serious one on how to make India a “Hindu Rashtra” by 2023, speakers made an appeal for a more courageous stand against “the onslaught on Hindu dharma by both the liberals and the Islamic extremists”.

Lone, one of the oldest members of HJS and now the Jalna district head of its women’s wing called Ranaragini, announced to the gathering: “Our agenda to become a Hindu Rashtra can be realised only if we face the 11 jihads launched against the Hindus courageously.” She counted three of the “true threats” to a Hindu Rashtra – sex jihad, ISIS jihad and love jihad. The rest she left to people’s imagination.

“Love jihad launched against our matas (mothers) and bhaginis (sisters) is systematically snatching them away from us. They are lured by Muslim men, converted and then eventually sold into flesh trade,” she declared. “Dikkhar dikkhar (disgrace)” the audience responded. “Our women are soft, they easily get tempted. Young Muslim men are trained to entice our women and convert them. It has been happening across Bharat. This has to stop.”

“Take a pledge, you will bring each Hindu woman back into the Hindu fold,” she demanded of the crowd in a shrill, high-pitched voice. The enthralled gathering replied, “Jayatu, Jayatu, Hindurashtram (hail, hail, Hindurashtra).”

One of the women, who was sitting next to this reporter, began narrating the incident from her neighbourhood where a Muslim woman had allegedly “lured” a Brahmin boy. “Not just Muslim men, even women are into jihad these days,” she said.

From the stage, Lone waved a book titled Love Jihad: Threat to Hindu Dharma and Remedies at the crowd and asked women especially to read the book. A lot of literature explaining Hindutva issues was available – nearly a hundred different titles ranging from “gau rakhsa (cow protection)” to “dharma parivartan (religious revolution)”.

In past decade, several sadhaks of the Sanatan Sanstha have been booked for their direct role in conspiracy and execution of terror activities. Its name first emerged in the 2007 bombings in Vashi, Thane and Panvel. Two Sanstha sadhaks were sentenced to ten years’ rigorous imprisonment for conspiring and planting bombs at auditoriums and theatres in the city. In June 2016, the Central Bureau of Investigation arrested Virendra Tawade, a member of the organisation, for meticulously planning rationalist Narendra Dhabolkar’s death. Tawade allegedly wanted to raise a militia of 15,000 people to target “anti-Hindus”.

The conference was aimed at evoking a strong pro-Hindutva sentiment, which in turn implied attacking the Muslims, the government, the media and the liberals.

Speaker Swati Khadye invoked the 2012 incident of the Azad Maidan riots to describe the “inefficiency of the state police”. “Those Muslims ran amok on the street molesting and beating the police. Our police could not do anything. We cannot rely on these helpless lot. We need to train ourselves to fight the onslaught,” Khadye said, declaring that women needed to learn self-defence.

The speakers for the evening, each one more caustic than the other, included several district heads from across Maharashtra, Goa, Gujarat and Karnataka. The Sanstha karyakartas had mostly travelled from western Maharashtra, Konkan and Khandesh region of the state.

The “guest of honour” for the evening was advocate Sanjeev Punalekar, national secretary of the organisation’s legal-wing called Hindu Vidhidnya Parishad that was set up following the organisation’s 2012 convention to assist ‘Hindu’ causes. Punalekar’s association with the HJS began over eight years ago when he represented convicts in the Thane and Vashi bomb blast cases. Since then, he has been representing all those accused of participating in terror activities and those alleged to have been involved in the killings of rationalists like Dhabolkar, Govind Pansare and M. M. Kalburgi. Punalekar claimed that he is not just an advocate protecting his clients in the court but also “a proud Hindu protecting the Hindu dharma from the onslaught on it by the liberals and Islamic fundamentalists alike”. Much applause followed.

‘Hindus are the real victims’

Addressing the huge gathering, Punalekar counted the various cases in which Hindu men were booked for their alleged role in blasts. “For every Muslim killed in the country, a Hindu is accused. There has been a systematic victimisation of the Hindus,” Punalekar claimed.

Given that the BJP is in power both at the Centre and in Maharashtra, the organisation should not feel victimised by the state; but the sentiments expressed were quite the opposite. Punalekar claimed: “The media and the government then portray us as the oppressor, while we are actually the real victims.” He further urged the educated Hindu masses to come together and strengthen the legal team of the organisation.

“We have been fighting the system both legally and strategically to bring our men out,” he claimed. The two prime accused in the 2008 Malegaon blast case, Rakesh Dhavade and Sameer Kulkarni were present at the conference. Both Dhavade and Kulkarni, who were released on bail last year, were felicitated at the event for their “great sacrifice and contribution to the organisation’s vision of Hindu Rashtra.”

Another target was the ‘liberals’, who, according to Punalekar, had planned a systematic conspiracy to “make their leaders appear as martyrs and us as terrorists.” “This is done to destabilise us from our focus of building a Hindu Rashtra. We should fight back,” Punalekar announced.

In April last year, under pressure from civil society groups and the opposition, the state government had sent a proposal to the Centre seeking a ban on the organisation under the Unlawful Activities (Prevention) Act. But the decision is still pending.

The February edition of the Sanstha’s bi-monthly magazine Sanatan Prabhat has alleged that the Bhima Koregaon violence was, in fact, a ‘conspiracy’ led by Dalits to target Hindutva organisations in Maharashtra. Blaming the Elgar Parishad, which had been organised at Shaniwarda, a Brahmin ghetto in the heart of Pune, on December 31 to commemorate the 200th victory year of Bhima Koregaon battle, the Sanstha’s mouthpiece claimed the event was organised to target the RSS and BJP’s “Brahmin CM” Devendra Fadnavis. 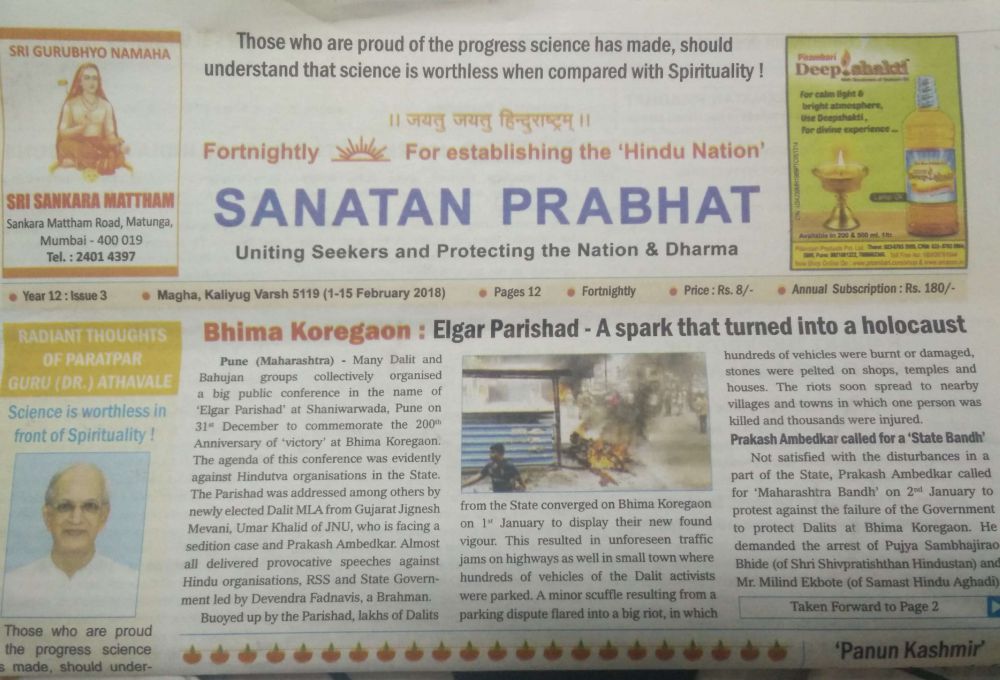 “The agenda of this conference was evidently against Hindutva organisations in the state. The Parishad was addressed among others by newly elected Dalit MLA from Gujarat Jignesh Mewani, Umar Khalid of JNU, who is facing a sedition case and Prakash Ambedkar. Almost all delivered provocative speeches against Hindu organisations, RSS and state government led by Devendra Fadnavis, a Brahman,” the paper’s headline story claimed.

The bulletin also claimed that Manohar alias Sambhaji Bhide and Milind Ekbote, both Brahmins and prominent Hindutva leaders and also prime suspects in the Bhima Koregaon attack on January 1, were intentionally targeted by Dalit organisations. “Pujya Bhide Guruji was falsely accused of inciting the crowd and participating in Bhima Koregaon riots. Pujya Bhide Guruji who leads a very simple life is a highly educated man,” the bulletin read.

The Sanatan Sanstha was established in 1990 in Mumbai but eventually moved its headquarters to Goa after its founder Dr. Jayant Athavale, a clinical hypnotherapist, was invited by a local businessmen’s social club to deliver a lecture. Since then, the organisation has strengthened its base on the Konkan coastal belt, from Maharashtra all the way to Karnataka. Most followers of the group are orthodox Brahmins from the Konkan region adhering to its ‘true’ and ‘original’ – Sanatan – idea of Hindu faith.

Over time, the group has also managed a strong hold over the Bahujan Hindus who they reach out through their periodic camps at the district and village levels. The Sanstha conducts weekly satsangs (religious discourses) in temples and organises moral science classes in schools.

At the Sunday meet in Pune, the Sanstha pracharaks had set up a separate stall for professions and families willing to give up on their professions to become full-time sadhaks or seekers. “One cannot be a part-time volunteer in such work. You need complete devotion and commitment to life for such work,” said Prathamesh Joshi, the Sanstha’s Sangli division worker. By the end of two-and-half hour discourse, over 250 people had shown an interest in becoming full-time members.

The organisation focusses on smaller towns and district-level centres and conducts door-to-door campaigns for members and donations. The Sanstha’s following and donor base have increased manyfold over the years and its sadhaks include doctors, engineers, bureaucrats and government officials.

As the convention wound up around 9 pm, it was decided that the sadhaks will travel across villages and replicate these meetings on a smaller scale. “It is important that we keep periodically reminding everyone their goal. We cannot lose our focus if we want to become a Hindu Rashtra by 2023,” Lone told the gathering, further appealing to them to take initiatives at their village and community level to spread the Sanstha’s message.

“Our supporter base mostly comes from the village level,” Sanstha’s media spokesperson Parag Gokhale told The Wire. Here on we would be investing more time and resources on strengthening our support base in the rural areas.”