As the communal divide deepens with every passing day, Muslims in today’s India have a lot to despair about and much more to be afraid of. 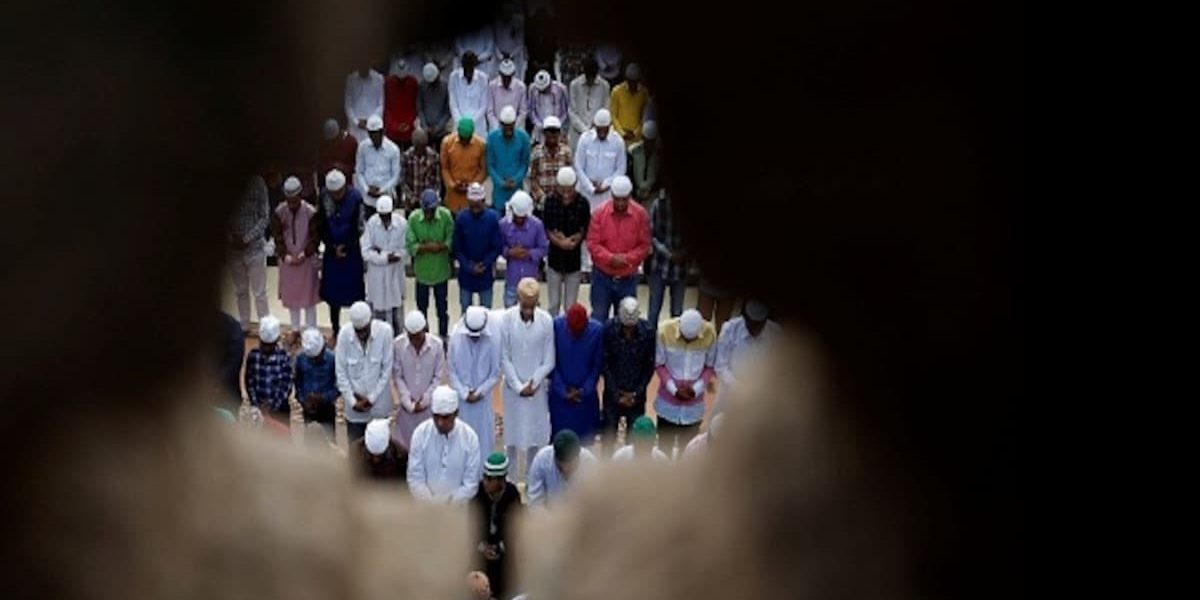 It both rattles and embarrasses me deeply when even my childhood Muslim friends tell me that, in the end, when the mopping up begins, all my sympathies and ideology notwithstanding, I would probably be spared because of my name – but no mercy shall be shown to them.

I do not want to feel helpless like the Nobel laureate German physicist Otto Hahn. His intimate friend and co-worker of over three decades, Lise Meitner, was born Jewish. In 1938, she was eventually forced to flee Nazi Germany through the Netherlands with just 10 marks in her purse. All that a distraught Otto Hahn could do for her was to give her his mother’s diamond ring to bribe the border guards, if required.

I would die a thousand deaths if I were to receive a letter like the one Meitner had written to Hahn, “You all worked for Nazi Germany… Certainly, to buy off your conscience you helped a persecuted person here and there, but millions were murdered without any kind of protest.”

No, I cannot take that blame. I am acutely aware of my moral responsibility in the face of the ever creeping evil and I must speak out for those millions who want to say the same thing but are reluctant for the fear of being accused of playing the ‘victim card’.

As the communal divide deepens with every passing day, Muslims in today’s India have a lot to despair about and much more to be afraid of.

This article is not about any religion, organisation, political party or government as they are all ephemeral. It is about our people who are enduring. I lament that the venom of hatred has become the lifeblood coursing through the veins of our body politic.

The concerted attack on the jewellery-maker Tanishq over something as trivial as a TV ad was a small symptom of the ‘othering’ in which, not to speak of maintaining any sort of relations, they would like the Muslims to vanish out of mind and out of sight.

When the Nazis’ Nuremberg Laws banned marriages with Jews, their objective was to maintain ‘racial purity’. Their categorisation of Jews as sub-humans (Untermensch) was based on race, not religion. In today’s India, through the anti-conversion laws, they are making religion the basis of criminalisation.

Recently, when a politico talked of carrying out a surgical strike on the old city of Hyderabad (that is, the Muslim dominated area), it was not just political rhetoric or slip of the tongue; it actually reflected their deepest, darkest desires.

Also read: As India Bolsters Its Anti-Muslim Credo, Where Is Hindu Society’s Outrage?

The Indian society is now increasingly being driven by a strict binary system. Either you conform to the majoritarian narrative or you are a traitor of some sort – jihadi, urban naxal, ISI agent, whatever – who must be jailed or banished.

That Muslims are under-represented in all types of jobs and over-represented in jails as under-trial prisoners is an old story. A relatively newer phenomenon is denial of rented accommodation, residential or commercial, and ‘boycott’ in trade and businesses – baby steps towards their eventual economic deprivation.

Majoritarian violence is seldom punished. Riots take place all the time because rioters know they will perhaps never be punished.

Surabhi Chopra et al of Centre for Equity Studies, in their research ‘Accountability for Mass Violence: Examining the State’s Record’, have shown that despite some 25,628 lives having been lost in communal violence since independence, there is massive bungling by the police at every stage. From reluctance to register FIRs to registering deliberately flawed FIRs; from extremely few arrests and remands to deliberately poor investigations, it is natural that acquittal rates of the accused have been extremely high. In fact, summary closure rates for communal violence cases are ten times higher than the national rate, showing how the police abuse the discretion given to them under the law.

Recently, all the 32 accused in the Babri Masjid demolition case were acquitted due to ‘lack of proof’ and more than three months later also, I could not locate any information regarding the CBI having filed an appeal.

For the notorious Hashimpura massacre of 42 Muslims by the UP police itself, it took over 31 years for them to be convicted by the Delhi high court after they were acquitted by the trial court.

The worst part of majoritarian violence is that the victims are encouraged to ‘move on’ or it is simply presumed that they have moved on. A demand for accountability and justice is described as one disturbing the peace.

Little do they realise that peace without justice is a dangerous myth. No question is ever settled unless it is settled right.

Criminalising the very existence of an entire community

In the wake of the coronavirus scare, it took three high courts to debunk the summary maligning of the Muslim community and call it ‘unjust and unfair’.

It took the Allahabad high court to conclude that the anti-cow slaughter law in UP was being misused against innocent persons leading to their languishing in jail.

Within just one month of bringing in the notorious law against conversions primarily involving inter-faith marriages (popularly known as anti-love jihad law), UP police has raced to register 14 cases and arrest 51 people.

Remember, inter-faith marriages are only one of the numerous pretexts possible. Tomorrow, they could very well object to certain dress also on the pretext that it facilitates the concealment of terrorists.

No reason to expect any succour from ‘protectors of law’

Experience shows that, far from upholding the law, police have been acting as the agents of communal forces in furthering their agenda. The law has been ‘weaponised’ as the most preferred tool of harassment. Listing the cases of harassment of innocent Muslims by the police by falsely implicating them in terrorism related cases would be long.

Whether it be the case of a comedian who did not crack any insulting jokes or a street vendor who was selling shoes manufactured by a regular company, they were charged essentially because they were Muslims – never mind that a string of Supreme Court judgments make the police action palpably wrong.

Many people taking part in a rally organised by right-wing groups in Mandsaur district in Madhya Pradesh went on a rampage in the Dorana village, breaking open houses and looting.

A nearly 100-strong police contingent decided to watch the proceedings with great insouciance, without using any force at all to disperse the rioters. Incidentally, a Muslim constable was obliged to watch his house ransacked, vehicles damaged, and his brother’s grain shop looted over a video that was shared amongst WhatsApp groups.

We must hang our heads in shame that even 73 years after Independence, Muslims have so little trust in the police that, on the rally day, they had to send their women to another village for safety.

In a police state, the government abuses its legal powers over its citizens. Ours is, however, more of a case of selective abuse. We have therefore become worse than a police state because the police are used to ‘selectively’ target and harass a part of the citizenry.

Obtaining justice through courts, given the inherent intricacies of our criminal justice system, is such an uphill struggle that it will remain beyond the reach of most people.

The ‘grand design’ behind the skulduggery

What could be the ultimate objective of all this? Is it political gains? I do not think so. The degree of communal polarisation already achieved is more than adequate to ensure comfortable electoral victories for the communal forces for years on end. Yet, they are unremittingly discovering new methods of harassing the Muslims every day. Why?

The ultimate objective of the overkill could only be to harass the Muslims so much that eventually, they come to accept their ‘social defeat’. Having started with the process of ‘othering’, they would force them first to accept a ‘second grade citizen’ status, then a ‘pariah’ status, and finally the status of ‘nowhere people’. The ‘grand design’ is to break their very will to live with self-respect, dignity and honour.

The British had defeated several Indian kings militarily but ruled over vast multitudes of Indians by compelling them to obey the laws they made for them only to keep them subjugated. The communal forces of today’s India know it very well that if just 1.55 lakh Britishers could rule over 35 crore Indians, 18-19 crore people can easily be ‘socially, economically and politically subjugated’ in an apparently ‘legitimate manner’ by 120 crore people through a clever exploitation of the legal system.

States implementing the so-called anti-conversion laws enthusiastically are actually crucibles where ingredients are being melted to forge a sword that will ensure the eventual and ‘complete subjugation’ of Muslims.

During the rampage in Mandsaur, the planting of a saffron flag on the local mosque as if they had ‘conquered’ it, albeit for a little while, proved that the protectors of law had once again failed Muslims. The triumphant pose struck by the rioter with his arms raised up recorded on video, was acutely reminiscent of the chilling photo of a man striking a similar pose during the Gujarat riots – a photo that became synonymous with those riots.

The pose is also adopted by many of their leaders during their speeches. It reflects their triumphalism, celebrating what they love to describe as retribution for all the ‘historical wrongs’ of the past 1,300 years.

To me, the writing on the wall is clear. Communal harmony, as we loved to envisage it, is dead. Those amongst us who choose to ignore the inexorable envenomation of the Indian society as some sort of fleeting aberration might be forced to stare in the face of some very dehumanising acts, if not outright pogroms. Even blood cancer initially shows up as low-grade fever only.

It is much easier to hate and be jealous of someone than to be kind and love them. The ‘beast within the collective subconscious of the people’ has been awakened and made to unleash all its fury without any feeling of guilt. If India has to survive as the nation the founding fathers had hoped it to be, this is the beast we need to watch out for.