The 'Laboratory of Hindutva' Began Experimenting During Vajpayee's Reign

While the 'fringe' might have gone mainstream today, extremist Hindu groups began testing political waters by unleashing targeted violence against Muslims and Christians soon after the NDA came to power in 1998 under Vajpayee's leadership.

It is a catchphrase of politics today that the ‘fringe’ has been emboldened under the government led by a Hindu nationalist icon. ‘Fringe’ elements have lynched Muslim men transporting cattle on the presumption of impending cattle slaughter. People have been killed for seemingly possessing beef. Many are convinced that the silence of the leadership of the ruling party on the matter is indicative of the ‘fringe’ having gone mainstream. Far from being some uncontrollable outlier, vigilantes now function with the blessings of the party in power. This was brought home when pictures of serving BJP minister Jayant Sinha garlanding eight men – who have been convicted of lynching on the pretext of cow slaughter – were splashed across the press earlier this year.

Just as the ‘fringe’ tested political ground in 2015 with the murder of Mohammed Akhlaq, and according to this Hate Tracker of cow-related violence, has boosted its activities with each passing year, Prime Minister A.B. Vajpayee’s reign (1998-2004) was also inaugurated with violence against religious minorities in many parts of India. Gujarat, then, as now, was a laboratory of Hindutva – to borrow the words of former Vishwa Hindu Parishad (VHP) leader Praveen Togadia. Fact-finding reports from organisations such as Communalism Combat, National Alliance of Women and Human Rights Watch tell us that a series of attacks were initiated against Muslims and Christians in Gujarat in 1998. Orchestrated by organisations like the VHP, Bajrang Dal and Hindu Jagran Manch (HJM), these were glaringly one-sided assaults on people, places of worship, burial grounds, schools, gatherings, marriage processions, households and businesses.

The Hindutva groups functioned with carte blanche. In Gujarat: Minorities in the Storm of Communal Attacks, a priest, who witnessed the fence of the St Xavier’s Social Service Trust in Ahmedabad being uprooted and a board announcing a Hindu temple put in its place, recollected that the vigilantes were confident in the refrain that “now our government is in power. We can do what we want”. The connection could not have been more clear. Vajpayee took oath of office on March 19, 1998. On April 15, 1998, a church being built in Naroda, at that time a suburb of Ahmedabad, was attacked. Policemen looked on as the attackers claimed that the structure had been built illegally. Denials by the priest in-charge were ignored as the Sangh affiliates acting as a local mafia and quasi-government demolished the structure. Then on July 16, 1998, the Shantiniketan High School run by the Loyola Trust in Zankhvav village, Surat district, was broken into. A tractor was driven through the premises and the playground was ploughed up. On July 20, copies of the Bible were burnt at the I.P. Mission School, Rajkot. The miscreants claimed that the school authorities were trying to forcibly convert students to Christianity.

Further, between June 21 and July 18, 1998, Hindu Dharma Jagran Manch (HJM) activists burnt churches in villages Singana, Lahan, Kadmad and Bhapkal in Dangs district. The attacks in Dangs were ratcheted up around Christmas time. For instance, in December, the HJM obtained the local administration’s permission to hold a rally on Christmas day in Ahwa, the capital of Dangs. Over 4,000 people participated in the rally and shouted anti-Christian slogans. This was followed by a series of attacks. For instance, on the night of December 25, around 120 rally participants vandalised Deep Darshan High School.

In the case of Muslims, weddings between adult Hindu women and Muslim men in Randhikpur and Sanjeli villages in Panchmahals became the trigger for violence in June 1998. Led by a 5,000-member Hindutva mob, the violence lasted for over ten hours. This pattern was repeated in June in Bardoli. There, the Sangh painted an inter-religious marriage as part of an international conspiracy to beguile Hindu girls and send them to Gulf countries as sex slaves. Gujarati newspapers faithfully reported this propaganda, leading to tension in surrounding areas too. These were older versions of the bogey of ‘love jihad’ political propaganda, and a pliant media, which are well entrenched in our society today. 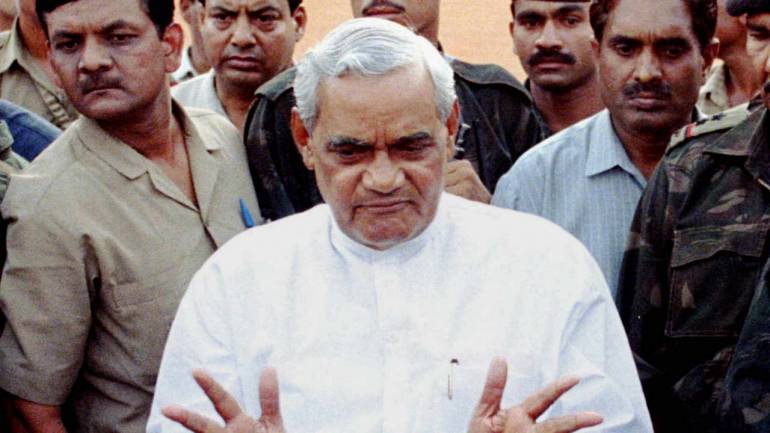 The attacks on Gujarat’s Muslims and Christians were reported extensively in the national press, and made it to international media too. They were discussed in parliament, where it was revealed that between January 1998 and February 1999, there were at least 94 such incidents. Further, since the BJP had come to power in New Delhi, nuns had been raped, churches damaged and missionaries killed in Madhya Pradesh, Uttar Pradesh and Orissa. There was also severe criticism of the government of Gujarat from the National Commission of Minorities (NCM). An NCM team visited Gujarat to investigate the spate of attacks. It recommended action under Article 355 of the Indian Constitution. This Article authorises the Centre to direct a State government to faithfully implement select provisions of the Constitution, including the rights of religious minorities.

The rising outcry from constitutional bodies, citizens’ groups, the media and national and international civil society organisations created certain effects. It compelled the government to provide protection to Christian missionaries. prime minister Vajpayee eventually visited Dangs, the epicentre of anti-minority violence. After his visit, a District Superintendent of Police who had been called out for his partisanship towards Hindutva groups was removed from the post. A more neutral police officer replaced him. New police inspectors and constables were appointed in many other parts of the district too.

These events suggest that Hindutva groups, eager to inaugurate a Hindu rashtra under ‘their government’, faced constraints in Gujarat as well as Delhi. As VHP leader Giriraj Kishore remarked at the time, the government in Delhi had been unable to implement the Hindu agenda as it was ‘limping on crutches’. These were the crutches, or rather the democratic imperatives of constitutionalism, coalition politics, and parliamentary democracy. All these checks and balances are under threat today. And there is no question of a Vajpayee-like statesman demanding more effective, less partisan governance in sites witnessing violence against the country’s most vulnerable citizens.