The Delhi Violence FIRs Are Like Blank Cheques, to be Encashed By the Police Any Time

Officially, the stand of the government on a high court petition seeking registration of a case against Mishra is that the "time is not ripe" for filing an FIR. Yet this has not come in the way of the police arresting 10 anti-CAA activists.

At a time when the entire country is on a pandemic-induced lockdown and only essential services are being allowed to operate, should the Central government have hurriedly begun acting on its hypothesis that the recent communal violence in North-East Delhi was provoked or planned by anti-CAA protestors? This is not just an academic poser but a question that needs to be addressed with utmost urgency while examining the Modi government’s priorities in the face of one of the biggest public health, social and economic crises to hit independent India.

A little over a month into the lockdown, students and alumni of Jamia Millia Islamia University who had participated in and organised protests against the Citizenship (Amendment) Act on campus are being served notices by the Delhi Police. Some of them have been arrested for allegedly ‘hatching a conspiracy’ that led to riots in the national capital and booked under the draconian Unlawful Activities (Prevention) Act (UAPA).

Some of these students may have visited protest sites in North-East Delhi, but that does not mean they were involved in organising the protests that came up on the Shaheen Bagh model. The case made out by the police also fails to take into account the fact that anti-CAA protest sites in Jaffrabad, Maujpur, Kardampuri, Gokulpuri and Shiv Vihar were targeted by mobs during the communal violence that raged in these parts of North-East Delhi in February. Never mind the fact that the violence broke out within hours of BJP politician Kapil Mishra’s speech where he threatened to remove the anti-CAA protesters who were staging a demonstration outside the Jaffrabad Metro station if the police did not do so within three days.

Officially, the stand of the government on a high court petition seeking registration of a case against Mishra is that the “time is not ripe” for filing an FIR. Yet this has not come in the way of  an FIR, numbered 59/2020 – first registered by the Crime Branch on March 6, 2020 – naming JNU student Umar Khalid and a person by the name of Danish as the prime accused. Subsequently, Jamia students Meeran Haider and  Safoora Zargar were arrested in connection with the allegations stated in the FIR. Safoora is three months pregnant.

After the arrest of Haider (who is also president of the youth wing of the Rashtriya Janata Dal in Delhi)  and Zargar (who was the Jamia Coordination Committee’s media coordinator) in the first two weeks of April, the Special Cell added UAPA charges to the FIR. Shifa-Ur Rehman, the president of the Alumni Association of Jamia Millia Islamia (AAJMI), was arrested on April 26. There are also reports that close to 50 members of the Jamia Coordination Committee, which includes students and alumni, have been served notices by the Special Cell of the Delhi Police.

It is important to take a closer look at the FIR because of which Meeran, Safoora and Rehman are currently behind bars.

FIR number 59/2020 was registered by the Crime Branch police station in Delhi on March 6, 2020, on the complaint of Sub-Inspector Arvind Kumar. According to the FIR, “the SI has learnt through his sources that the communal riot incidents in Delhi that took place on February 23, 24 and 25, were part of a preplanned conspiracy. The conspiracy to spread the riots was hatched by JNU student Umar Khalid and his associates who are linked to a number of organisations.”

As per the FIR, Umar Khalid gave provocative speeches at various places and appealed to Muslims to block roads and public places during US president Donald Trump’s visit to India. The FIR alleges this was done as part of propaganda to show that atrocities are being committed against Muslims in India.

To this end, the FIR says, “firearms, petrol bombs, acid bottles, stones, sling shots and other dangerous items were collected in homes in Maujpur, Kardampuri, Jaffrabad, Chand Bagh, Gokulpuri, and Shiv Vihar and nearby areas.”

The FIR says that Danish, a resident of Bhajanpura (in North-East  Delhi), was given the responsibility of collecting women and children to block the Jaffrabad metro station to create tension in the area. This, according to the FIR, led to riots in North-East Delhi.

The case is currently being investigated by the New Delhi Range of the Special Cell. The FIR was initially registered under IPC sections 147, 148, 149 and 120(B), which relate to rioting, armed with deadly weapon and unlawful assembly. All of these sections are bailable. After the case was transferred to the Special Cell, charges of conspiracy to commit murder (302), attempt to murder (307), sedition (124 A), promoting enmity between different communities on grounds of religion (153 A) and sections under the arms act were added.

Of the two prime suspects named in the FIR, Danish was arrested and later granted bail. Khalid has still not been questioned.

On April 21, the police added sections 13, 16, 17 and 18 of the stringent UAPA to the FIR. These sections pertain to offences of unlawful activity, commission of a terrorist act, collecting funds for a terrorist act and conspiracy for committing a terrorist act.

‘This FIR seems to be a new innovation in criminal law’

Advocate Sarim Naved, who is representing Meeran Haider, says this FIR is nothing but a blatant attempt to politicise the communal violence in North-East Delhi by blaming anti-CAA protesters for it.

According to Naved, “One of the basic things in criminal law is that you have a proceeding based on a crime. The FIR has to say that a crime has been committed. This investigation is about a vague conspiracy that may or may not have inspired a hate crime or communal violence.”

He adds, “This FIR seems to be a new innovation in criminal law. There is no way that any terrorism charges are prima facie made out here. It is a very tenuous charge. The smoking gun is completely missing. You are working backwards from where people have been killed. You are saying it is a result of the anti-CAA protests and then you are picking up students who were on the ground, not necessarily organising the protest but supporting the cause.”

But under the UAPA, the police have a maximum of 180 days to file the chargesheet with the judge’s permission.  This means that FIR 59/2020 is a potent weapon in the hands of the Delhi Police’s Special Cell.

Naved points out that Danish was granted bail when the charges in the FIR were still bailable. He could not be arrested later after more stringent charges were added because someone who is granted bail in a matter cannot ordinarily be arrested again when other charges are added to the same FIR. That condition might change now that UAPA has been added to the FIR.

The lawyer further states that given the fact that Umar Khalid was named as an accused on March 6, 2020 and has not been asked to come for questioning even once, his status as an accused is unclear. However, till the time the police files a chargesheet in court clarifying that no evidence could be found against him, it has to be assumed that charges are made out against everyone.

“It seems as if they don’t want to arrest Umar Khalid,” Naved comments, adding that it may have something to do with the fact that the case is too weak. “This FIR is like a blank cheque which can be encashed any time. They can use it against him even after one year. His arrest is one phone call away. The police can call him anytime and ask him to come to the police station,” he says.

A total of 10 people have been arrested under FIR 59/2020 as of April 20. This includes Khalid Saifi and Ishrat Jehan, who were arrested on February 26 over allegations of inciting violence against the police at the anti-CAA protest site in Khureji Khas. They were named in FIR 44/2020, registered at the Jagatpuri Police Station, and later asked to join the probe relating to FIR 59/2020.

This means that they too are now facing terror charges for organising anti-CAA protests. FIR No 59/2020 is likely to open the floodgates for the possible arrest of more anti-CAA protesters across the national capital.

A group of eminent citizens including academicians, historians, filmmakers and activists who have come together under the banner of Campaign against Witch-hunt of anti-CAA activists, have questioned this FIR. A statement released by them says, “F.I.R. means First Information Report, i.e., the receipt of information that a cognizable offence has been committed. However, FIR no 59/2020, shows a glorious absence of any information. It has conjectures, yes, even a theory of what the complainant, a sub-inspector of the Delhi Police thinks, has transpired, but certainly no information. By hypothesising that Muslims did not send their children to schools on the day violence broke out, it attempts to elevate prejudice and conspiracy theories typical of WhatsApp bilge to ‘legal fact’.”

A timeline of arrests of Jamia students and alumnus

The timelines of their arrests is as follows:

He has been arrested under FIR 59/2020 and booked for murder, attempt to murder, rioting, Arms Act and sections under the UAPA. 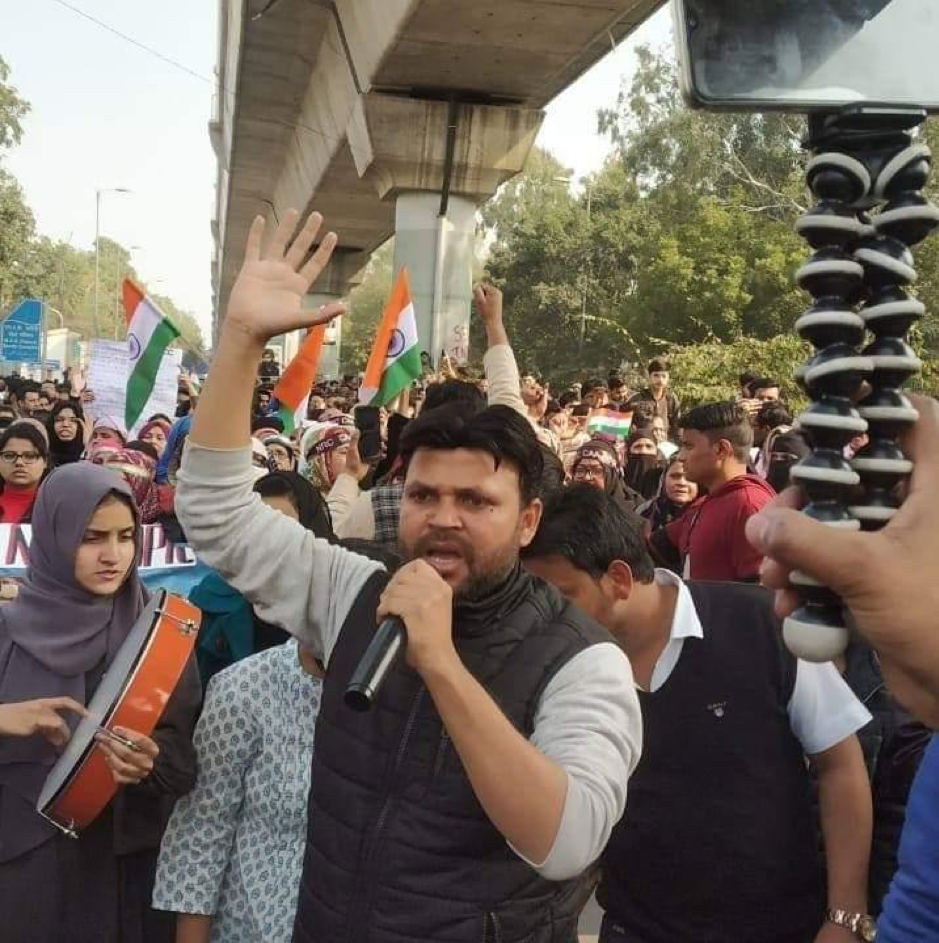 Students who were part of the anti-CAA protests in Jamia Millia Islamia say they are living in constant fear of being picked up by the police.

Speaking on condition of anonymity, one of the members of the Jamia Coordination Committee said that Zargar and Haider were arrested because they were the ‘admin’ of the official JCC WhatsApp group and were coordinating protest information with close to 170 media platforms.

The student said that they were so spooked by Haider and Zargar’s  arrest that they have deleted the JCC WhatsApp group from their phones. He also claimed that about 50-60 students from Jamia are under surveillance and terrified of being booked under false cases.

Another university student, also a member of the JCC, said he had stopped taking calls because he was certain his phone was being tracked. He also said that he was not sure how many JCC members had been served notices by the police because he was not stepping out of his house either.

Clearly, pandemic or no pandemic, it is business as usual for the powers that be when it comes to their approach towards peaceful dissent against their policies.

Note: In an earlier version of this story, it was incorrectly stated that Sabu Ansari was also arrested under FIR No. 59. His arrest was only under FIR No. 44.