"If you ask for water, Indians will give you juice. If you ask for milk, we'll give you buttermilk. But, if you want the hijab all over India, we will chop you (Muslims) all with Shivaji's sword." 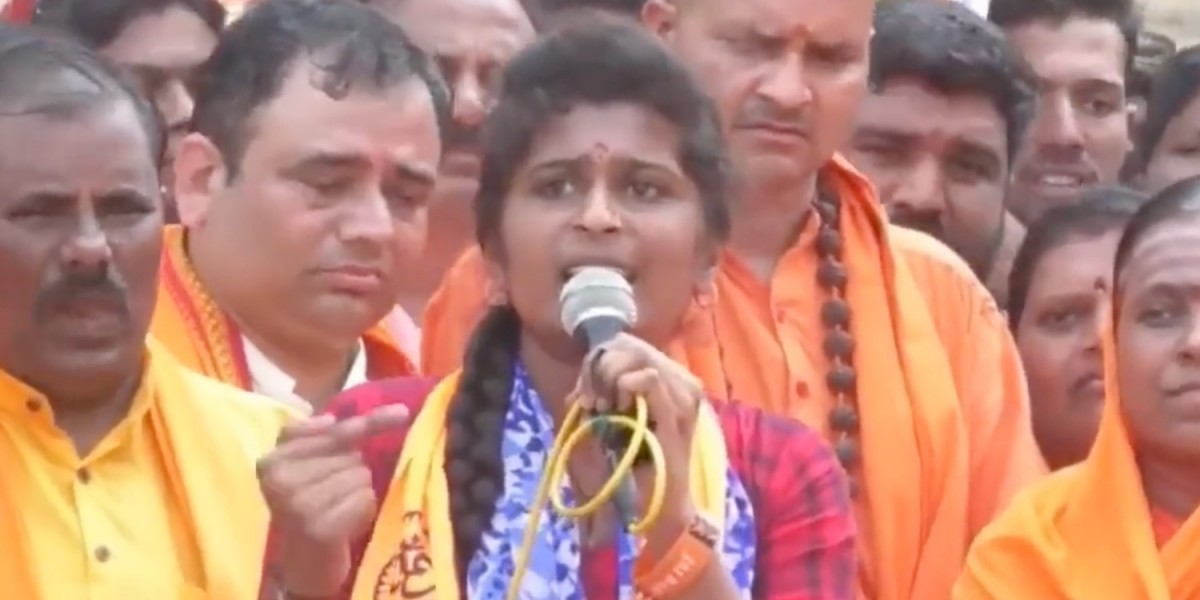 Bengaluru: After the hate speeches at the ‘Dharma Sansad’ in Uttarakhand’s Haridwar, where calls for genocide against Muslim sparked outrage, a teenage member of a Hindu right-wing outfit in Karnataka has made another similar call.

In a video that surfaced on social media on February 25, 19-year-old Pooja, a member of the Bajrang Dal, is heard openly making calls for genocide against Muslims at an event organised to protest the death of a Bajrang Dal man in Vijayapura district.

The event was attended by more than 500 people demanding justice for Harsha Hindu, who was stabbed to death by a group of people in Shivamogga on Sunday, February 20, night. Hindu right-wing supporters allegedly vandalised Muslim localities and set their vehicles on fire. The next day, incidents of stone-pelting and arson were also reported throughout the district. So far, ten people have been arrested in connection with his death.

“If you ask for water, Indians will give you juice. If you ask for milk, we’ll give you buttermilk. But, if you want the hijab all over India, we will chop you (Muslims) all with Shivaji’s sword,” Pooja said, while the crowd of hundreds cheered and applauded her speech.

Also read: The UP Poll Is Playing Out Under the Shadow of a Genocidal Call – The Media Forgets This

“Saffron is India. We are happy with all the arrests that have been made, but it’s not enough. If you (the government) cannot do it, give us 24 hours. Let the government give us just one hour and not just these six girls in hijab, we’ll cut 60,000 in hijabs into pieces,” Pooja said, referring to the six female Muslim students who have been protesting at the Government PU College in Udupi for the right to wear hijabs in the classroom.

The students have filed a writ petition in the Karnataka high court and sought permission to wear headscarves inside educational institutions. After 11 days of hearing, the court on Friday, February 26, reserved its judgement on the pleas.

“My statement was not meant for all Muslims”

Speaking to The Wire, Pooja said, “My statement was not meant for all Muslims. I believe in Ambedkar’s constitution. Even I have Muslim friends and we know each other very well without any hatred. Some people are bringing hijab topics and making us fight within. What I said was these six anti-national girls who are trying to divide this country, and if these six turn into 60,000 anti-nationals, we’ll get them arrested.”

“The last incident which happened with Harsha shouldn’t happen again with our brothers and said that (Shivaji’s sword) statement in anger. I didn’t want it to become a big issue,” she said, referring to Harsha’s death.

When asked why she did not leave these matters to the law and order authorities, instead of making inflammatory statements, the 19-year-old said, “You’re right, but even after many days Harsha’s murderers are not yet convicted. The investigation is going on, but it’s getting delayed. This will give a wrong message to the public, that no action will be taken against the murderers.”

“Bajrang Dal is training, encouraging youngsters to provoke others by using hate speech”

Speaking to The Wire, Vijayapura Bahujan Samaj Party (BSP) leader Shrinath Pujari Sangappa strongly condemned the Pooja’s speech and said, “This kind of hate speech isn’t right. ‘We will chop you, kill you,’ all this kind of speech will have consequences.”

“Police have registered so many suo moto cases,” he said, pointing to actor Chetan Ahimsa’s arrest. ”But why isn’t the police registering a case against these people who gave hate speeches like her and Pramod Muthalik (the Sri Ram Sene chief)? We cannot stay quiet after listening to this. Who’s giving her (Pooja) training to speak that way? There should be an investigation on this.”

The person sitting next to him. Is Pramod Muthalik. https://t.co/3xPdseTKJh pic.twitter.com/aMMAjUhhmn

Kannada actor and activist Chetan was arrested on Tuesday, February 26, for his tweet against a Karnataka high court judge who is part of a three-bench judge hearing the hijab case. The police had registered a suo moto case against the activist on charges of promoting enmity. He was granted bail by a magistrate’s court on Friday.

When asked why people are openly giving hate speeches, Pujari who is also an activist and advocate, said, “The political party needs these kinds of issues for their upcoming elections. They cannot take credit for development or showcase their work. The whole economic system has crashed, unemployment has increased. They had promised two crore jobs, and to reduce petrol and diesel rates. Now there’s no reason to showcase their promises. People are opposing them, and just due to this the BJP is diverting attention.”

“There will be worse days coming due to communal violence. The Bajrang Dal is training and encouraging youngsters to provoke others using hate speech. If people are applauding their speech, it means they have full support for their words. That organisation has to take all of the responsibility for it,” he added.

Feroze Rozindar, a freelance journalist from Vijayapura, told The Wire, “I don’t know if she made this speech in a spontaneous manner because people are cheering for her or she already planned. I doubt that she had any kind of a Hindutva background. I think she just wants to groom herself into this to become the next leader by getting inspiration from the other Hindutva activists.”

Highlighting that there is a syncretic Hindu-Muslim culture in Bijapur, he said, “Many saints, including Basavanna (Basaveshwara), were born here. People have this in mind that there shouldn’t be Hindu-Muslim discrimination. That’s why many BJP leaders, except for Basanguda Patil Yatnal, maintain a very good rapport with the Muslim community.”

Rozindar, who was a former journalist at The Hindu, requested that the police department and the concerned authorities file a case against Pooja. “If you want to support Hindutva, then it’s your choice. But that doesn’t mean you have to hate Muslims and other communities. If someone is not coming forward to file a case, then the government or police should file a suo moto case. Without any proof, police are filing sedition cases, but here they even have proof then why are they not doing anything,” he added.

As of now, no complaint has been filed against the Bajrang Dal activist, despite the fact that there are videos of her calling for genocide.