The three students have been arrested on sedition charges for allegedly uploading pro-Pakistan slogans on social media. 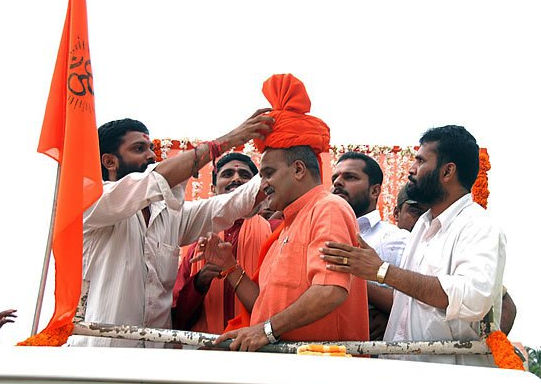 Sri Ram Sene chief Pramod Muthalik. Muthalik, however, was not the leader who made the 'tongue chopping' comment. Photo: Facebook

New Delhi: A leader of the Karnataka rightwing organisation Sri Ram Sene has said that he would pay a reward of Rs 3 lakh to anyone who would chop the tongues off three Kashmiri students who were arrested on sedition charges.

The comments were allegedly made by one Siddalinga Swami, who The Quint has identified as the honorary secretary of the Sene, which is said to have connections with the killers of journalist Gauri Lankesh. Swami was reportedly seen making the comments in a video that was shared on social media. The news portal has translated the Kannada comments into English as follows:

“On the occasion of the birth anniversary of Chhatrapati Shivaji Maharaj, I am telling you that those who have been been nurtured by India and have chanted ‘Pakistan zindabad‘, who are currently in jail…their tongues, with which they chanted ‘Pakistan zindabad’, whoever can cut off those tongues and bring them, the Sri Ram Sene will give them Rs 1 lakh for each tongue – a total of Rs 3 lakh as reward. Such anti-nationals do not deserve to be in this state. The Sri Ram Sene is ready to take on those who oppose the country.”

The Sri Ram Sene had until recently focused its attention on violent moral policing, especially around the time of Valentines Day celebrations on February 14. In 2009, its members gained special notoriety after they chased, slapped and dragged by the hair several women in Mangaluru who had gone to a pub. All four accused were acquitted.

The trio, students of a private engineering college, were arrested on Saturday, February 15, allegations surfaced that they had raised “pro-Pakistan slogans“ and posting them on social media on the first anniversary of the Pulwama terrorist attack.

The Kashmir Walla has identified them as Talib Majeed, Basit Asif Sofi and Aamir Mohiuddin Wahi. All of them are from Shopian.

Initially released on the payment of a bond, the students were re-arrested on Monday, February 17, after protests broke out against police over their release. These protests were overwhelmingly led by rightwing groups. Sri Ram Sene chief Pramod Muthalik was among those who took a leading role in them.

Meanwhile, amidst news of the students having been manhandled by a mob at the court, Ashok Anvekar, a member of the Hubli Bar Association, told PTI that they had decided that no member from the bar would appear as counsel for the three Kashmiri students.

Saying that such comments only serve to add to a trust deficit, the J&K Students Association has asked for Siddalinga Swami’s immediate arrest and urged Karnataka chief minister B.S. Yediyurappa to provide a safe and peaceful atmosphere for Kashmiri students.

Association spokesperson Nasir Khuehami said that this was an utterly inhumane statement and called for three immediate steps. “First, the government should be swift in action and law enforcement must quickly arrest these barbaric elements. Second, meetings should be held between Kashmiri students and civil society so that the latter’s misgivings regarding the former are erased. Third, groups which wish to make such heinous threats the fashion must be banned,” he said.