One of the men seen calling Sai Baba 'Muslim' while supervising the removal of his idol has said that the video was fake. However, the militant Hindutva leader has congratulated him. 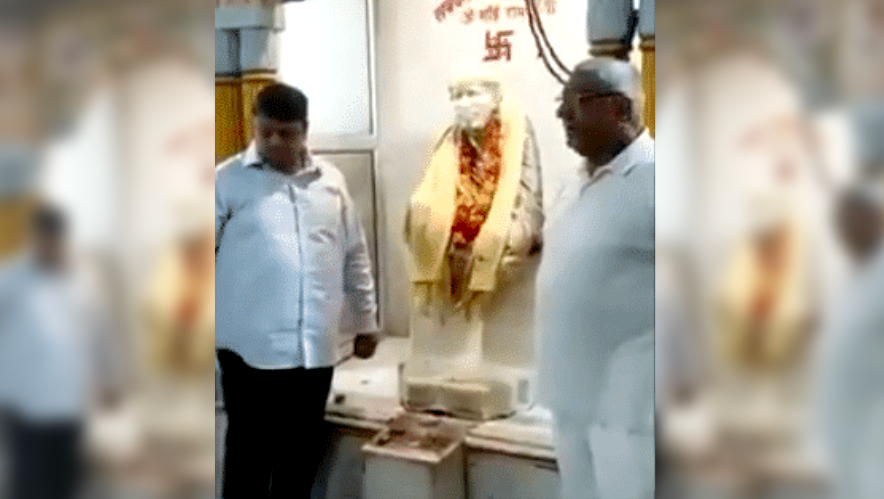 Padam Panwar (in blue) and the Sai Baba idol in a screengrab from a video showing the removal of the idol.

New Delhi: The Delhi Police is investigating the removal of a Sai Baba idol from a temple in south Delhi’s Hauz Khas after videos of men demolishing it and alleging that he was a “Muslim” were circulated online and led to devotees filing a complaint.

The men in the video, meanwhile, have attempted to distance themselves from allegations of communalism, even though a prominent militant Hindutva leader has endorsed it, calling Sai Baba a “jihadi”.

Sai Baba is a 19th century spiritual leader from Maharashtra’s Shirdi, who is worshipped by Hindu and Muslims alike.

According to police, the idol of Sai Baba was “removed” from the Purana Shiv Mandir at Shahpur Jat by members of the temple committee and locals. No formal case has been registered in the matter yet but temple authorities will be called for an enquiry, Atul Kumar Thakur, Deputy Commissioner of Police (South) told PTI.

“This idol was set up by temple committee member Padam Panwar. And now Padam Panwar along with other committee members such as Bharat Panwar, Jiya Panwar, Satyanarayan, Naresh, Mohan Panwar and Pandit ji have decided to setup new idol with the consent of local residents,” a senior police said to the news agency.

In the video that began circulating on social media in late March, one of the men surrounding the idol and appearing to supervise its extraction from the stone base is heard saying, “He is no god. He died in 1918. He is Muslim.”

Another person, off camera, uses a slang for Muslims, appearing to refer to Sai Baba.

To both Scroll.in and Indian Express, the man in the blue shirt making the “Muslim” comment in the video, Padam Panwar – who police mentioned as having set up the idol and overseen its removal – said that the idol was removed because it had become old. Panwar has also denied that he made the comments he can be seen making in the video and alleged that the video is fake. He also introduced the Scroll.in reporter to his Muslim tenant and acquaintance

PTI has reported that the idol was put up in 2009. A detailed ground report prepared by Scroll.in found that a Ganesh idol has come up in place of the Sai Baba idol in the temple. A member of the temple management committee, Bharat Panwar – also named by police – evaded questions on a Sai Baba idol being put up again by citing expenses in establishing new idols.

Bharat reiterated that the main reason behind the idol’s removal was the damage to it. However, locals who spoke to the news outlet said they had not seen any marks of damage. Many locals, who are believers in Sai Baba’s form of religious syncretism are hurt at the removal as well.

Indian Express noted DCP South Atul Kumar Thakur as having mentioned that the complaint was lodged by devotees “from across the city”.

Like Padam and Bharat, a third man – who is reportedly seen in the video issuing instructions on the idol removal – Jitender Panwar, also distanced himself from allegations that the idol was removed because the committee considered Sai Baba Muslim.

The Scroll.in report notes, “A message forwarded by him on the Shahpur Jat society’s WhatsApp group at 10.53 pm on March 27 claimed that the popularity of Sai Baba “also known as Chand Miyan” was a “conspiracy economically supported by the Islamic world”.”

Jitender repeated the “idol was removed because it was damaged” claim but said that he sent the above quoted message “so that people do not get agitated.” Vacillating on whether he believed the conspiracy, he said he had watched videos on YouTube which made claims similar to those in the forwarded message but also added that the video could have been fake.

Scroll.in reports that Padam Panwar’s attempts to distance himself from a communal angle in the idol removal hit a roadblock with the rousing endorsement of the action by Yati Narsinghanand Saraswati. The Wire has earlier reported on Narasinghanand’s significant activities in the days leading up to the Delhi riots of 2020.

“Narsinghanand is a militant Hindutva leader with his headquarters in Dasna in Ghaziabad, where Uttar Pradesh meets Delhi. His influence in Delhi’s overground and subterranean Hindutva networks has grown exponentially because of his association with top leaders of the Bharatiya Janata Party like Kapil Mishra – and his willingness to say bluntly and openly what mainstream Hindutva politicians baulk from saying about Muslims.”

In mid-March, Narasinghanand praised his follower Shringi Yadav for giving a “befitting reply” to a minor Muslim boy for horrifically thrashing him after he entered a temple to drink water.

In the video, Scroll.in notes Narasinghanand praising Padam Panwar too.

“Saraswati congratulates and blesses him for “breaking and throwing away” the idol of “pakhandi Sai” – fraudster Sai. “If I had my way, jihadis like Sai won’t be able to enter temples,” he says.”

When contacted by the news outlet Narasinghanand endorsed this line and said Sai Baba was a “lawless raider”.

“His name was Chand Khan. He was a jihadi. It is the madness of our Hindus that he is now in our temples,” he told Scroll.in, echoing the contents of Jitender Panwar’s forwarded text.

Narasinghanand has reportedly laughed off Padam’s suggestion that he was not in agreement with whatever the Hindutva leader said.