In studying the Sangh parivar for my film, I encountered the disciplined manner in which the December 6, 1992 operation was planned.

Twenty five years after the demolition of the Babri Masjid, The Wire, through a series of articles and videos, captures how the act of destruction changed India forever.

In September and October 1992, the Wide Eye Films team and I filmed The Boy in the Branch at the Rashtriya Swayamsevak Sangh (RSS) headquarters in Nagpur. Commissioned by SOUTH, a documentary and current affairs programme on UK’s Channel 4 television channel, the film looked at the process of indoctrination and recruitment of young Hindu boys by the RSS shakha system.

Prior to this, in December 1990, I had observed my first RSS shakha while working with journalist Lindsey Hilsum on a BBC radio documentary about the Ram janmabhoomi movement.

We visited the RSS headquarters at Jhandewalan in Delhi where we interviewed K.S. Sudarshan, who was sah sarkaryavah (joint general secretary) of the RSS at the time. Sudarshan organised an ekatrikaran (a gathering of shakhas in a show of RSS strength) for us to document, and seeing the two of us arrive with just a tape recorder and a few microphones he seemed visibly disappointed that there were no cameras or a TV crew.

Subsequently, I began my research on the shakha at the RSS headquarters in Delhi, secured permissions and a year later, found myself in Nagpur filming The Boy in the Branch. 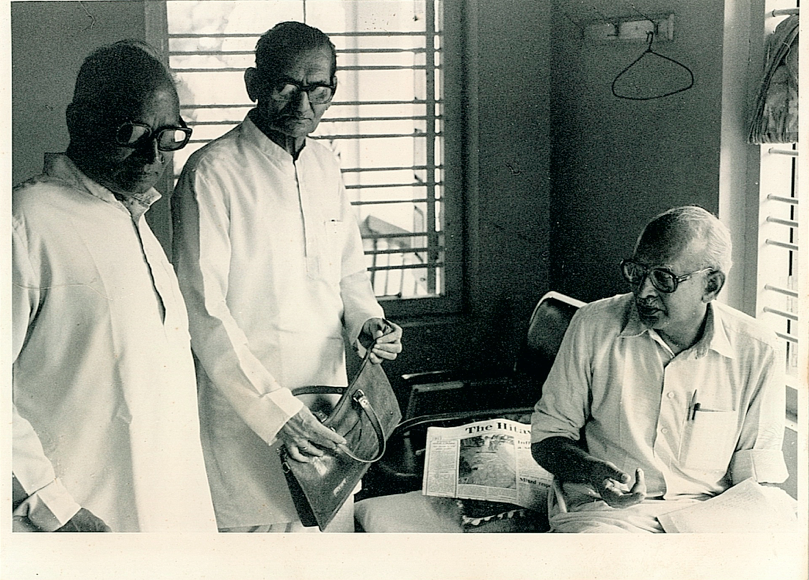 Juxtaposing the activities of two different RSS shakhas or branches, my film documented the stories and the games, the rituals disciplining the body and the mind, and the social worlds and sense of community that the young RSS initiate inhabits. In the process, I hoped to reveal how the shakha regime enabled the RSS to revitalise, reproduce and replicate itself and spread its Hindutva ideology to newer areas.

The Boy in the Branch never had the Ram janmabhoomi-Babri Masjid issue as its central focus – yet, it was impossible to escape the mandir-masjid discourse that was at the core of RSS activity at the time in Nagpur.

When we talked to the young boys at the RSS shakha, six-year-olds would tell us about the need for Hindu unity, how the Muslims were not letting the Ram temple be built in Ayodhya and why the mosque should not be there.

At proudh (adult) RSS shakhas, swayamsevaks read and discussed journalist Arun Shourie’s writings on the Ram janambhoomi movement. Later, Shourie would make an appearance in Nagpur on October 5, 1992, as the chief guest for the RSS founders’ day.

In his speech as the chief guest, Shourie praised the RSS for highlighting symbols and transforming them into national issues, as they had done with the Ram Janmabhoomi Andolan:

“We will have to achieve the aims of this movement.

If you were to present the average Muslim in UP with the archaeological evidence and the historical proof of the temple’s destruction, the Muslim would realise that leaders like Shahabuddin are giving him false information.

… They say that Islam will be destroyed by breaking a mosque… Prophet Mohammed had himself broken mosques. It is written in the Koran… Allah approved it in the Koran. Mosques would be shifted routinely…” 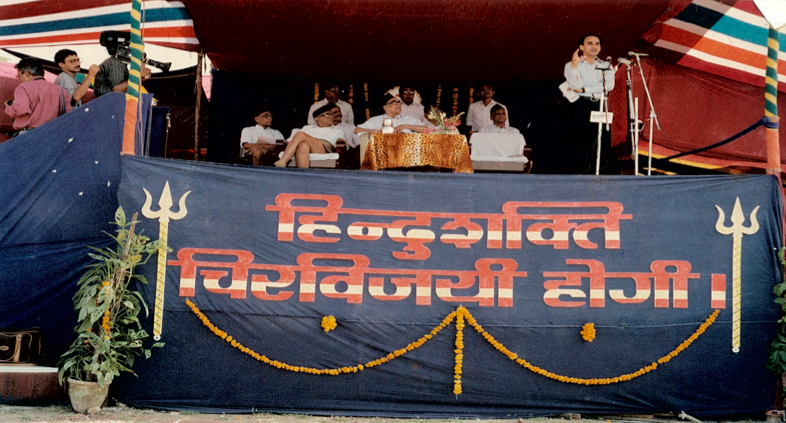 At the time, the RSS and the Vishwa Hindu Parishad (VHP) were promoting the Ram Paduka Poojan Abhiyan (worship of Ram’s slippers) as a way of enlisting support for the Ram mandir. The padukas would be blessed at a central temple from where they would be taken to neighbouring districts and villages. The aim was to raise finances and enlist volunteers for karseva at the end of November and December. We documented the puja at the Durga mandir in Pratapnagar and filmed ‘our’ volunteers taking the padukas to different neighbourhoods in Nagpur.

I was aware of the sleight-of-hand by which the Kalyan Singh-led UP state government had acquired 2.77 acres of land around the Babri Masjid for purposes of ‘promoting tourism’. Subsequently, the area around the masjid had been built up to lay the foundation for a temple, even though the UP government claimed this was merely a platform for ‘performing bhajans‘.

There had also been assaults on the Babri Masjid on October 30 and November 2, 1990, and police firing on karsevaks by the Mulayam Singh administration in UP. While official accounts claimed that 16 karsevaks were killed, the RSS and VHP suggested that thousands had died, and in a highly emotive and communally charged atmosphere, volunteers carried the asthi kalash (urns with the ashes of the dead karsevaks) in a national campaign to accelerate the mobilisation of volunteers for the December 1992 karseva.

As we began editing the film in mid-October, I had an uneasy sense that something was going to happen at Ayodhya in the coming weeks. I expected there would be unrest, and perhaps some violence and clashes between security forces and the karsevaks. But I had also come to believe the Hindutva propaganda that all of the mobilisation of personnel and resources we were witnessing was towards a symbolic karseva – at best a political tool to pressure the courts to allow the building of the temple in the distant future.

When the Babri Masjid was demolished, we were near completion of our film.

As I watched the images of the demolition, I was stunned. How had this been achieved? How spontaneous was this movement? What was the RSS’s role in all of this? Had the RSS volunteers in my film any part to play in the mobilisation and the demolition?

Eight years later, in 2000, as the RSS-BJP reaped the benefits of the mosque demolition and moved from the opposition and the periphery of Indian politics to the centre, I returned to Nagpur to meet the boys in the branch – Sandeep, Sripad and Purushottam – to renew my engagement with the RSS and to talk with them about their role in the Ram janmabhoomi movement. This journey was to result in a sequel and my second film on the RSS – The Men in the Tree.

The 1992 film was made with official RSS permission and therefore we had to negotiate a system of constraints and an informal system of surveillance. There was always an appraisal of the questions we asked and the inquiries we made, along with pressure to project and promote certain RSS social service initiatives. The current sarsanghchalak of the RSS – Mohan Bhagwat – was All India Sharirik Pramukh in 1992 and was in constant touch with the RSS volunteers during our filming.

In contrast, my visit to Nagpur in 2000 was a personal one just to meet the characters from my earlier film and it happened largely under the radar of the RSS.

I traveled alone on my first two filming trips in August and October 2000, and was accompanied by cameraman Ranjan Palit on a third shoot in April 2001. 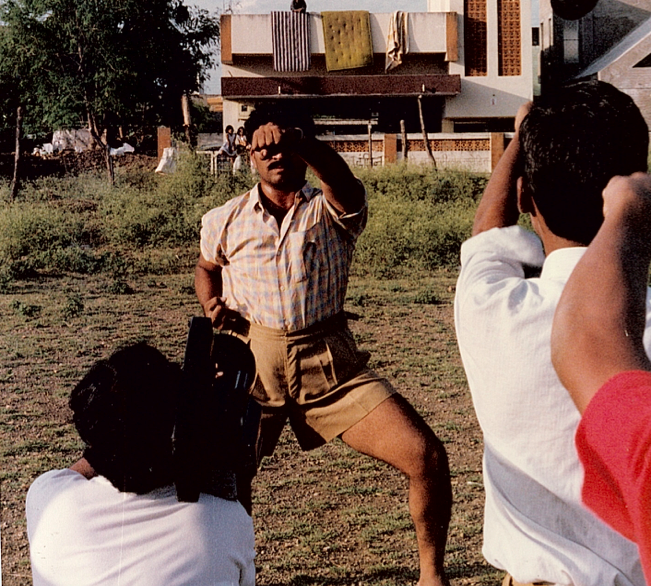 When I met Sandeep, Sripad and Pururshottam, they were eager to tell me about what had happened in their lives in the intervening years. But most of all, they wanted to talk about the demolition of the Babri mosque, their contribution to the movement, and “how they made history”. There was absolutely no holding back and I was surprised at how outspoken they were.

Sripad described the Ram janmabhoomi movement planning as a “war strategy where some are sent to the front while others man the base camp”.

Both Sripad and Purushottam were at the front lines, while Sandeep was one of the RSS volunteers who was deputed to “stay behind and work on the foundation”.

They explained that there was detailed, meticulous organisation and deployment of personnel for months before the karsevaks were to arrive in Ayodhya. As Sandeep said, “there was micro-planning”. Groups of five karsevaks were formed and sent to Ayodhya under a leader. Purushottam was one of the group leaders. Sripad was one of ten RSS swayamsevaks from Nagpur especially selected to do ‘a job’, which he was proud to have accomplished.

Both Sripad and Purushottam climbed onto the dome of the Babri mosque and took turns with the other karsevaks breaking it. Sripad told me proudly that they were able to accomplish their mission of breaking the mosque in just five hours.

But what about the ordinary Ram bhakts unconnected to the RSS family of organisations who spontaneously ventured to Ayodhya to perform karseva out of a sense of personal devotion and enthusiasm?

Sandeep told us that there might have been a few volunteers who arrived in Ayodhya independently, but they would have had to report to RSS workers at the centre who made all local arrangements and effectively controlled the activity of such persons.

It was a movement – there was planning and discipline. It wasn’t possible for just anyone to land up there as a temple volunteer.

Sandeep, Sripad and Purushottam’s accounts suggested that there was nothing spontaneous about the Babri mosque mobilisation. It was a highly controlled, disciplined and secretive operation carried out with months of prior planning and premeditated calculation.

A persistent strain in Sangh parivar discourse about the Babri Masjid demolition is the spontaneous nature of the mobilisation, as an assemblage of angry, outraged Hindu victims congregates. This is invariably followed by a significant rupture as the mob gets unruly and breaks the rule of law in an outburst of emotional outrage and indisciplined excess.

Ten years later, we would be witness to a re-enactment of the same performance programme of ‘spontaneous mob combustion’ during the horrific Gujarat pogroms that would catapult Narendra Modi to the centre-stage of the Indian polity.

In studying RSS and Sangh parivar movements, there is an urgent need to look beyond the manifest and performative dimensions of an action that often involves the staging of events to create the illusion of spontaneity.

After painstakingly compiling its evidence over 17 years, the Liberhan Commission indicted the Sangh parivar in 2009:

“Prognosis of the evidence leads to the conclusion that the mobilisation of the kar sevaks and their convergence to Ayodhya and Faiziabad was neither spontaneous or voluntary. It was well-orchestrated and planned. In conformity with the army-like discipline of the organisations like the RSS, the manner in which the arrangements and mobilisation was carried out does not corroborate the theory that the convergence or the mobilisation of such a large number of karsevaks was for symbolic karseva alone.” (pg 917)

In 2016, I stop by Nagpur to meet the RSS men from my two films. It has been 15 years since we met last. Today, both Sandeep and Sripad have successful careers and shakha-going children. Although they are not full-time activists, they continue to be involved peripherally in RSS work. They continue to feel great pride in their involvement in the Ram janmabhoomi movement and their ‘historic achievement’ of December 6, 1992 – the day the ‘dhancha’ – or ‘structure’ – was destroyed.

But when I meet them this time, there is an embellishment to the story:

Sripad reminds me that at the end of our shoot in October 1992 we had given gifts of ‘Bangali shirts’ (long, knee-length khadi kurtas) to the five main characters in the film.

Sripad tells me with a laugh:

(When we were going to attack the Babri mosque, one thought was that we must not go in our uniform. But we were wearing the RSS knickers, so we wore the Bangali shirt over that.. and that’s how we worked on the structure, we kept breaking it and working on it..

Lalit Vachani makes documentary films and teaches at the Centre for Modern Indian Studies (CeMIS) at the University of Göttingen, Germany.