In the aftermath of a Hanuman Jayanti procession which saw stone pelting on April 16, most Muslims have had to leave the Bhagwanpur area. Those who stayed behind say they are in constant fear. 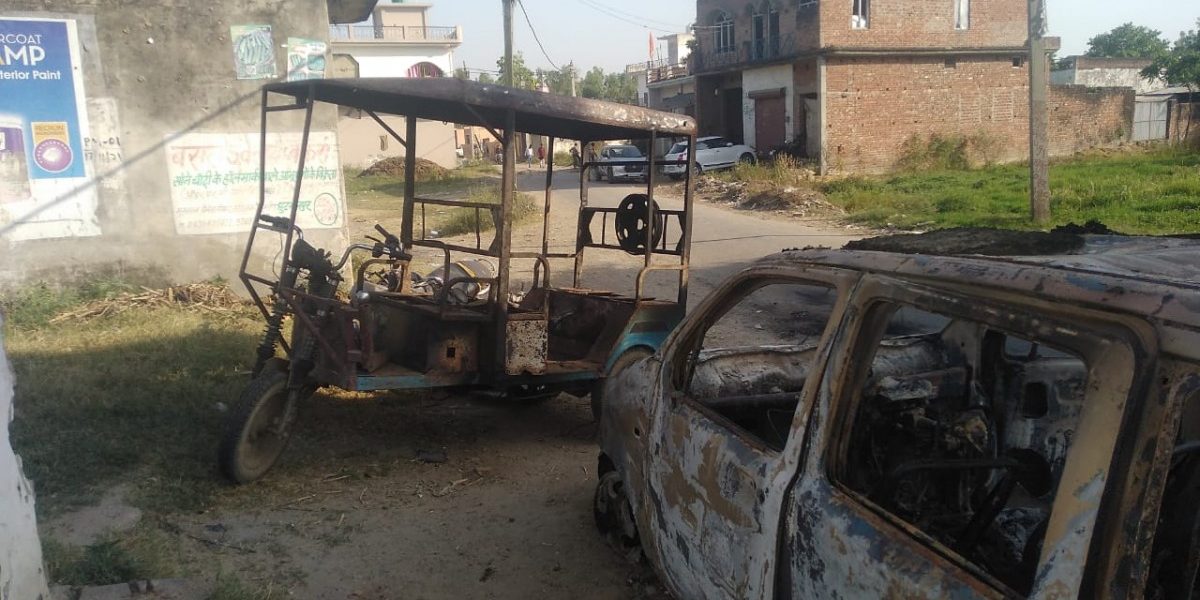 Roorkee (Uttarakhand): Dada Jalalpur is a hamlet in Roorkee’s Bhagwanpur region. On April 16, violence broke out here after a Hanuman Jayanti ‘shobha yatra’ or procession. The lanes of the hamlet are narrow, but they clearly separate ‘Hindu’ areas from ‘Muslim’ ones.

The former is marked with saffron flags and has a temple at its centre. The latter is in the interior and surrounds a mosque.

Dada Jalalpur appears to have an almost equal number of Hindus and Muslims, with a dominant Other Backward Class Hindu community, the Sainis.

There is heavy police presence as shops remain shut. Tension is evident in the region. Several Muslim residents have fled the village after Hindutva leaders warned of “action against conspirators”, threatening to bulldoze their houses and host a Dharma Sansad, previous iterations of which have been calls for genocide of Muslims.

The Hindutva leaders reportedly also threatened to stage a protest on April 20 if their demands are not met and “Muslims are not put behind bars“.

In the past two days, tensions rose as a bulldozer was seen stationed outside the Muslim area. Residents were reportedly asked to “surrender themselves”. However, no houses have been razed yet.

On Monday, April 18, in a meeting with members of the Bhim Army, the Senior Superintendent of Police Yogendra Singh Yadav stated that no houses will be bulldozed. Local police forces present on the ground confirmed the same. However, residents continue to live in fear.

Meanwhile, on Monday itself, yet another Hindutva leader, Dineshanand Bharti, of the outfit Kali Sena, was heard giving an ultimatum to the administration to arrest “stone pelters”.

‘Kashmir Files’ and a Hindu Rashtra

“They are jihadis, conspiring against us Hindus, it is sad to see that they eat here, but they talk of tearing the nation apart,” says one Naveen Saini, when asked as to what happened on April 16. Naveen said that he is affiliated with the Rashtriya Swayamsevak Sangh. 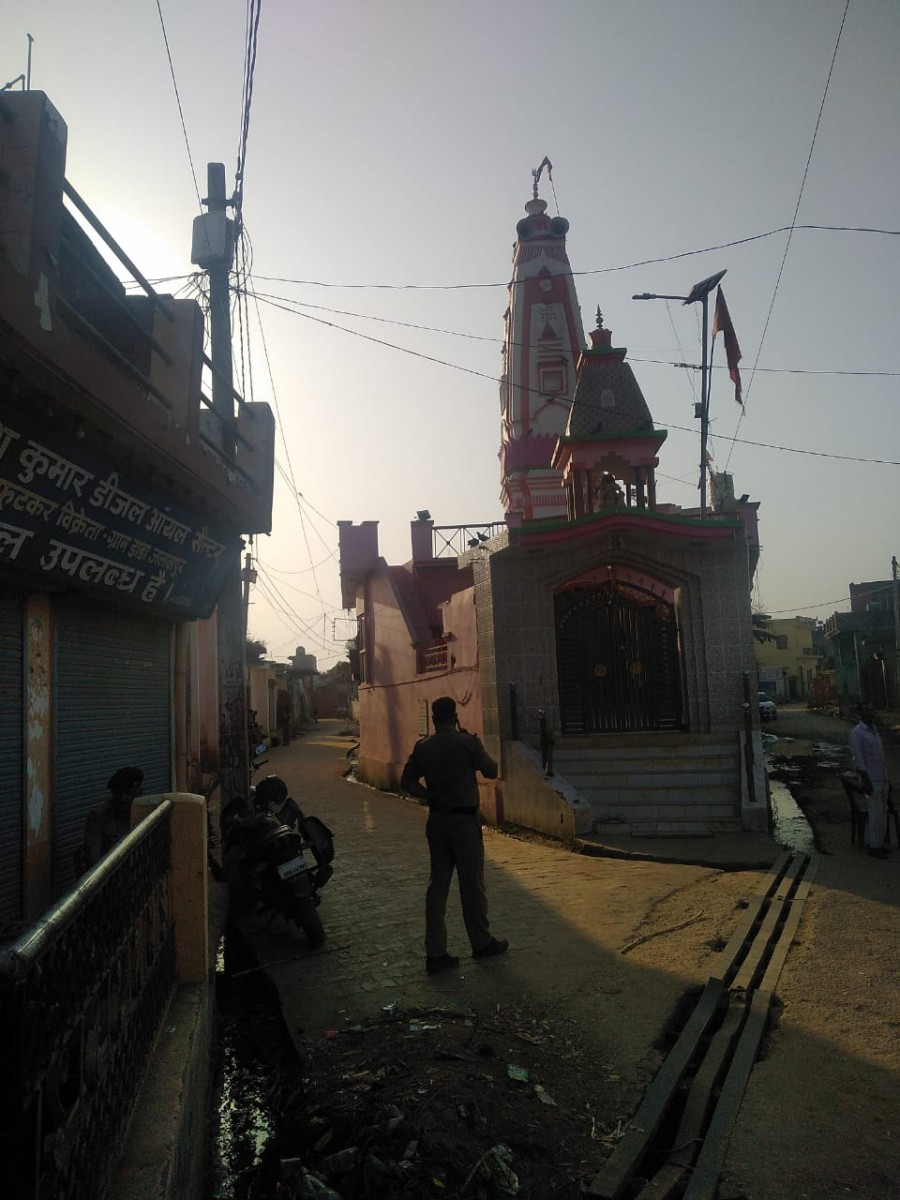 Naveen claims that The Kashmir Files, a controversial film which enjoyed tax breaks by BJP-ruled states, enthused them to fight for their “rights.”

“The movie inspired me so much, it brought tears to my eyes,” says Naveen. He adds that Hindus need to wake up to finally realise their dream of making India a Hindu Rashtra.

When asked what a Hindu Rashtra will look like, Naveen said, “When we wave the saffron flag across the country, with Hanuman Chalisa playing in each home and Yogi Adityanath will be our leader, that will be our Hindu Rashtra.”

Calling the violence a “conspiracy”, he claims, “The pattern across the country is clear, they pelt stones on our processions, this is exactly what they did here. They made an announcement from the mosques to gather arms, which led to the violence. We had to do something.”

However, none of the Hindutva workers that The Wire spoke to could show videos where such a call was heard being made, in spite of the existence of several videos on the violence.

So what happened on April 16?

On the night of April 16, residents of three adjacent villages in the Bhagwanpur region, Dada Patti, Dada Hasanpur and Dada Jalalpur organised a procession on the occasion of Hanuman Jayanti.

Videos from the night shared on social media show a crowd of young men carrying sticks, playing loud music and chanting communal slogans as they pass a mosque. Locals spoke of “DJ tractors” in the processions – tractors with equipment to blare loud music.

Video footage shows stone pelting and chaos as the procession moved further along the village. Ten people were reported to have been injured, however, the actual number could be much higher.

Muslim residents recount a story very different from the one put forth by Hindutva workers who claimed they were pelted at with stones.

“They threw stones at our homes, we had to lock ourselves up to protect ourselves. They broke everything,” says Razia*, the only member from her family who stayed behind in the village.

“They tried barging into our homes, I could hear them beating sticks on the doors of my home as I ran up the terrace to protect myself and my children. We climbed on to our neighbour’s terrace and managed to hide away until it settled,” she adds. 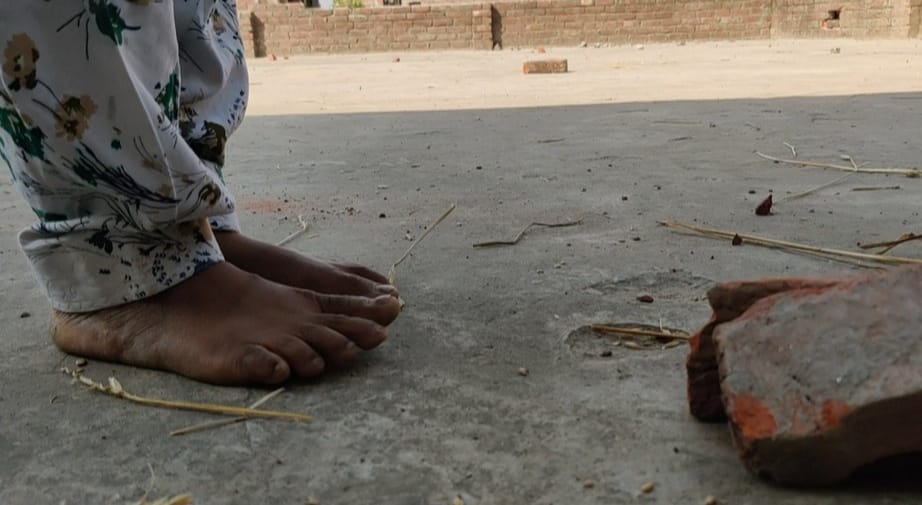 Razia believes that Rs 50,000, that she had kept in the house, along with some silver was looted.

Razia added that the OBC, Dalit and Muslim communities in the region have lived in peace for a long time. This has come as a shock.

Her neighbour, Alim*, has a similar story, “The main door of my house – which is strong and made of iron – is damaged. You can see, it is no longer even closing. They broke through the door with sticks. My wife was hit on the head and I was hurt while trying to escape,” he said. 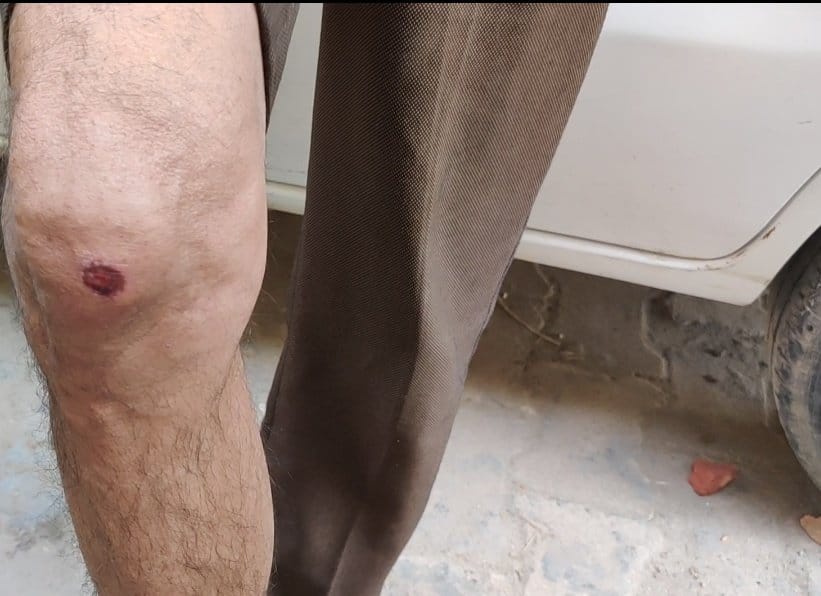 A team of Superintendent of Police (Rural) Premendra Dobal reached the spot soon after the violence broke out. Six Muslim men were arrested.

Hindu residents say that after the quelling of the violence, at around 1 am, the crowds led by BJP leader Bhagwan Saini insisted that the procession be allowed to continue. Permission was allegedly granted in those early hours itself.

“After this violence broke out, we had to go on in full force and finish our Yatra. How could we not? We were enthused, we were playing songs against them, the police and the administration supported us and we carried out the Yatra with full flare,” said one  Sonu Saini, a friend of Naveen’s.

‘We are saying this openly’

“We thought that that would be the end, but it was not. The procession returned through the very same route,”  said Farman* whose house lies on the corner of the village and close to the route of the procession.

Naveen Saini, quoted earlier, claims that the procession reached the end of the village when stone pelting started again. “There were women on the rooftops pelting stones, which further escalated the violence,” he says.

Outside Farman’s home are the remains of an e-rickshaw, a motorcycle and a car gutted in a fire which he claims was started by the those in the procession. 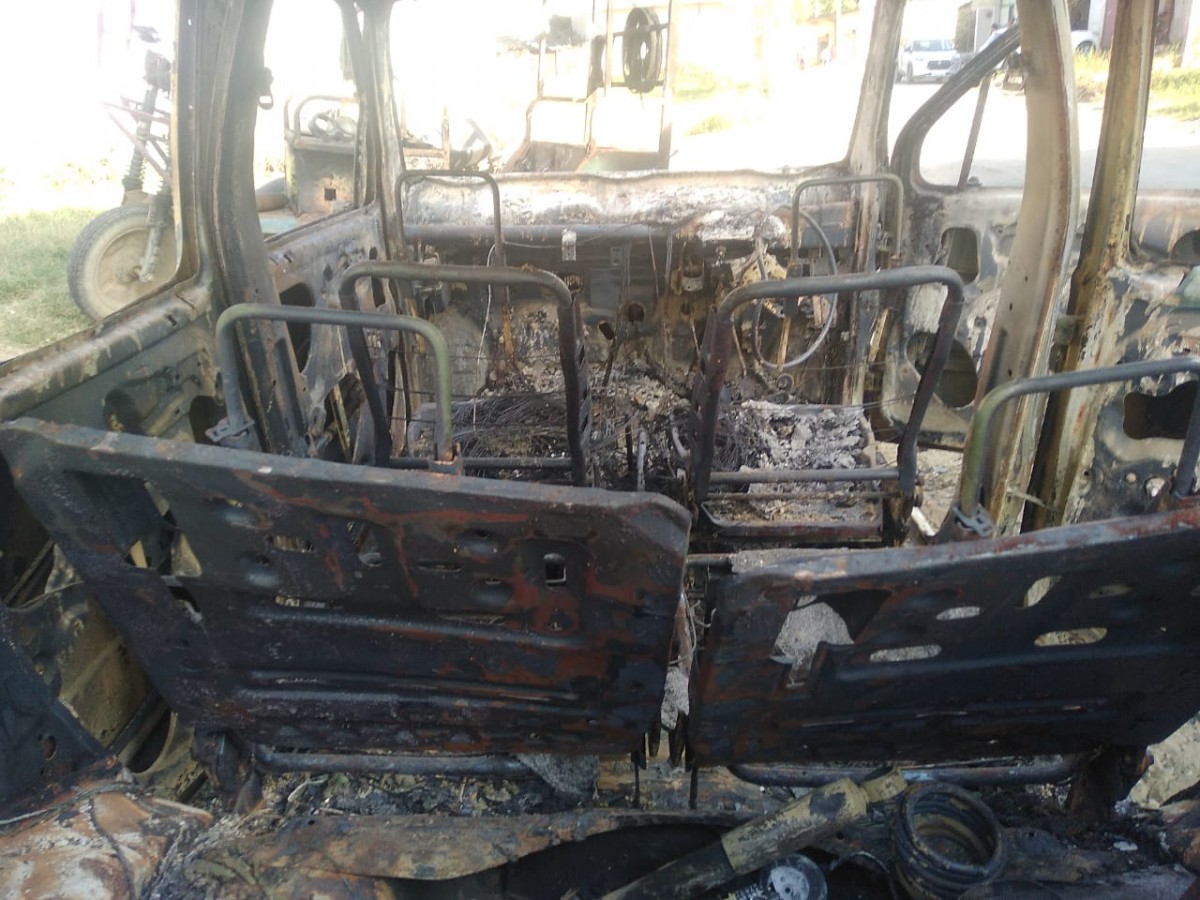 “They broke into our home after setting fire to our vehicles, we did not do anything. But we feared for our lives and had to hide in in a small space at the back of the house. Had we been caught we would be dead,” says Farman. The electricity meter at his house has been destroyed and other parts of his home, too has been vandalised, he said. Valuables and money were also stolen, he added.

Farman says he has been spending his nights in the fields, scared of fresh violence.

The inside and outside of Farman’s house in Dada Jalalpur  of Roorkee. Photo: Sumedha Pal/The Wire

Sonu Saini tells The Wire, “They are only leaving the villages right now, there will soon be a day when they leave the nation. We will now have to resort to violence, only talks will not serve anything. The youth of this country have woken up. We will now kill them.”

Sonu also claimed to be affiliated with the Rashtriya Swayamsevak Sangh.

Muslim families have written to the police detailing the damages they faced and the injuries they have suffered. 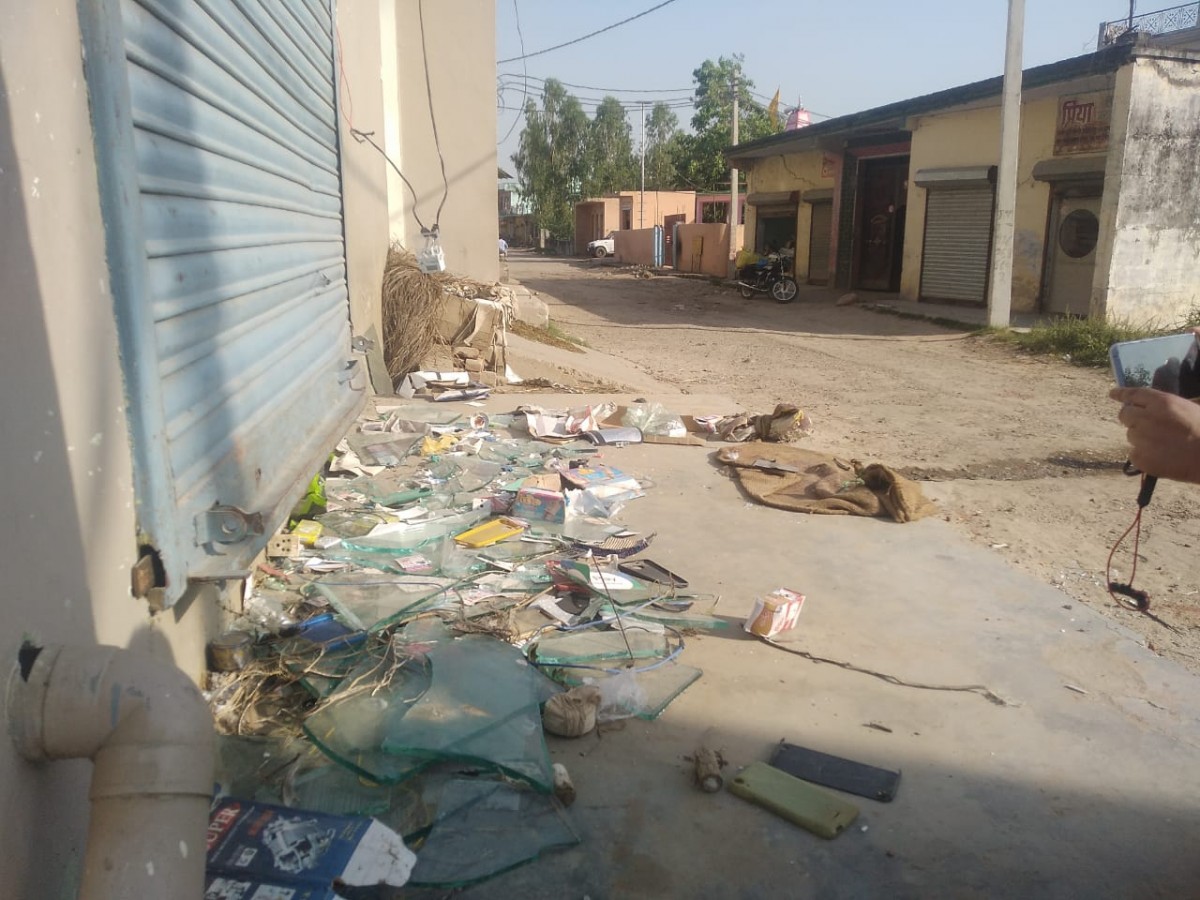 The police filed an FIR in the case on Sunday, April 17. Since then, more people have been arrested, taking the number to 14.

The accused were charged under the Indian Penal Code’s sections 153 A (promoting enmity between different groups on grounds of religion, race, place of birth, residence, language, etc., and doing acts prejudicial to maintenance of harmony), 195 A (threatening any person to give false evidence), 147 (rioting) and 148 (rioting, armed with deadly weapon).

“My son was picked up in a brutal crackdown, I was beaten up too,” says Bano*, breaking down.

“There are young children roaming around our streets, they do not know where their fathers are, we are suffering a great injustice,” she says, referring to the arrests and her own grandson.

Bano, too, is shocked. “Our children have all grown up together. We do not know how this happened,” she says.

“We want justice, whoever is the culprit should be brought to light. We do not care if there is a bulldozer, we want the culprits to be caught,” Shilo says.

“Our children have grown up together, they can never hurt anyone. But the Muslims have done everything,” says Sushila.

*Names have been altered to protect identities.