Malik Sehrawat (real name Vikas Sehrawat) was in jail for a few weeks for his violent comments against Congress leader Alka Lamba. 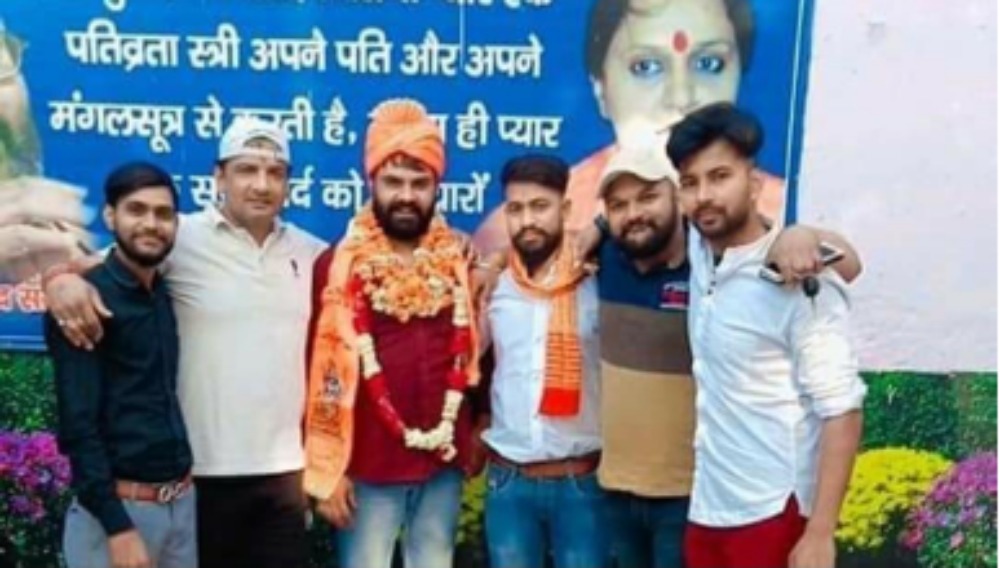 Malik Sehrawat outside the Dasna temple on the day of his release.

New Delhi: On June 5, a video made by one Malik Sehrawat went viral on Twitter. In the video, originally posted on April 11, 2021 on his Facebook page, Sehrawat (whose real name is Vikas Sehrawat), can be seen threatening to kill renowned NDTV journalist Ravish Kumar and Aam Aadmi Party (AAP) leader Amanatullah Khan. He put out the video just a day after he was released from Dasna jail on April 10, for uploading another incendiary video abusing Alka Lamba and calling for anti-Muslim violence in Ghaziabad.

Pinky Chaudhary is the man who claimed responsibility for the January 2020 Jawaharlal Nehru University attack and recently made videos threatening to kill Muslims. He heads the radical Hindu Raksha Dal and has promised Rs 51 lakh for the AAP leader’s murder.

Sehrawat is not a lone wolf, and this is not the first time that he has threatened to kill someone. He is a prominent part of an incendiary group of men and women who not only spread hate on a routine basis but whose names have been highlighted in relation to several episodes of anti-Muslim violence, for instance the Delhi violence of 2020. In April 2021, The Wire published detailed investigations on this ecosystem and the violence it commits online and offline (see here and here).

There are several videos in which Sehrawat can be seen openly inciting people and threatening to kill Muslims or critics of the government. He has also vowed to kill and send “anti-nationalists” like Prashant Bhushan to jahannum (hell) if he ever sees them.

Also read: Under Modi, Politics of Polarisation Takes Over Development Narrative During Pandemic

Sehrawat is the leader of the extremist ‘Mahakal Team’. He claims to be associated with the Bajrang Dal and enjoys the patronage of radical Hindutva preacher Yati Narsinghanand Saraswati. When Sehrawat was arrested, Narsinghanand released a video with Sehrawat’s associates and said that he will be out soon and “he will be back to work with new energy”. 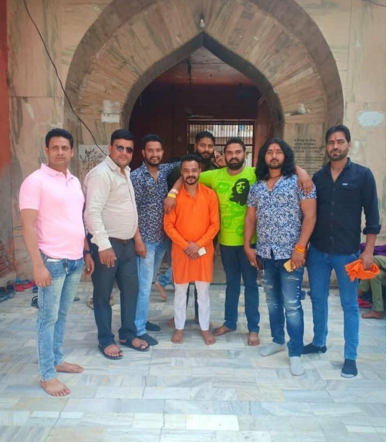 Sehrawat and others outside Dasna temple.

In a live video uploaded from the Dasna temple premises after Sudarshan TV’s call to assemble at Dasna in support of Narsinghanand and Shringi Yadav, the Hindutva militant who had brutally assaulted a minor Muslim boy on camera, Sehrawat and his associates threatened to murder and evict Muslims in Dasna.

Sehrawat also abused Congress leader Alka Lamba and warned her not to enter UP. He was temporarily arrested after Lamba filed a complaint. However, he was released on bail in less than two weeks. At the end of the video in which he issues death threats against Ravish, he also congratulates the UP police and Yogi Adityanath for taking good care of him while he was in Dasna jail.

Earlier, Sehrawat and his associate Suresh Rajput, aka ‘Hindu Sher Boy’ (with 4.6 lakh followers on YouTube) had uploaded a video in which they threatened to shoot Delhi chief minister Arvind Kejriwal and kill and evict Muslims in Mangolpuri. Along with extremist Hindutva leader Ragini Tiwari, Suresh Rajput had also participated in and led a rally against ‘love jihad’ in Delhi, where they raised slogans like “Ka**Mullo ko goli maro (Shoot the Muslims)” and “Jab mulle kaate jayenge, tab Ram Ram chilayenge (When Muslims are killed, we will shout Ram Ram)” in the presence of the Delhi police.

The Wire had documented several hate speeches against Muslims at these “love jihad” protests at India Gate and Jantar Mantar. A page called “Hindu Parivar” regularly broadcasts live videos of such events. This page was unpublished by YouTube after it was found to be in violation of the platform;s hate speech policy. However, it’s back online now on the channel. The thumbnails of most of these incendiary videos spell out death threats and rape threats. 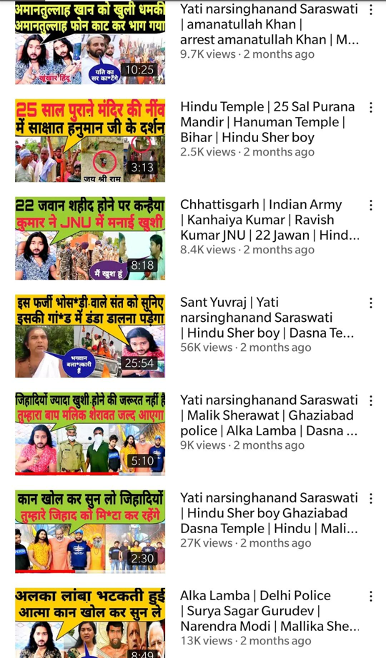 After Sehrawat was released from jail, he made another video abusing Lamba using extremely explicit language and sexually charged descriptions about her body. In a video against the Gandhi family on Sehrawat’s channel, the thumbnail graphically threatens rape against Congress leaders Priyanka Gandhi and Sonia Gandhi (archived link of thumbnail).

For one reason or another, YouTube and Facebook don’t take prompt or serious action against these serial offenders who regularly violate their community standards. After the Shahi Imam of Jama Masjid called for Narsinghanand’s arrest in his Friday sermon, two of Narsinghanand’s disciples, Rahul Sharma (who was also present in Sehrawat’s viral video from Dasna) and Suresh Rajput, went to Jama Masjid late at night and uploaded another inflammatory video from the gate of the mosque. After the video was reported, YouTube deleted the channel – but the video and channel are back online now.

Like his guru Narsinghanand, Sehrawat constantly provokes and inspires his audience to commit violence. More chillingly, there are videos of Sehrawat where he threatens to commit terrorist attacks against Muslims on Fridays and broadcast them live to his audience. “Tomorrow I am going to make history. I request all Hindus to do the same…Please watch at 1.30 PM after the Friday namaz in Palwal. They disrespected our Guru (Narsinghanand), they will see what we will crush under our feet and hang on our swords. Muslims can’t even imagine what’s going to happen… Listen you mullahs, after Pallwal we will come to Bhilwara. Keep as much ammunition as you want, we are coming… The war has been declared. Kill or die.”

He claims to have set two targets for this year in another video. “Iss saal 2 wicket toh girenge hi…bus jail mein kuch log bandh hai unke bahar aane ka wait hai…Pakistan mein bhi shradanjali milegi (Two wickets will fall this year…we are just waiting for a few people in jail to come out…even Pakistan will pay tribute),” he said. While some of these videos have been deleted, The Wire has downloaded them from his alternate accounts, in case the police decide to act against the group.

The writer and scholar Shuddhabrata Sengupta aptly describes the modus operandi of this ecosystem, with the Dasna temple as its headquarters, headed by Yati Narsinghanand:

“Their strategy involves triggering attacks on vulnerable Muslims on random excuses, circulating news of these attacks, brazenly facing token action by the police and administration that handles them with kid gloves, and retrospectively presenting themselves as victims of what they call ‘jihadist terror’ (which is their preferred mode of indicating the mere presence of Muslims) and a ‘leftist’ conspiracy.

The logic of this strategy requires the serial staging of brazen attacks and the putting out of justifications along an escalating scale of absurdity. The more outrageous the claim, the more currency it gets. This is the logic by which the ground is prepared for a full scale conversion to terrorism as a normal practice.”

Just in the last few weeks, numerous hate crimes have been committed against Muslims in India, particularly in Uttar Pradesh. In the absence of any strong check by law enforcement agencies, incendiary and hateful messages of the kind Sehrawat, Narsinghanand and others make continue to circulate online, reaching a wide audience.