Who Is the 'Vivadit Pakshakar' Out to Foil the Ram Temple's Bhoomi Pujan? Workers install loudspeakers in Ayodhya ahead of the August 5 bhoomi pujan. Photo: PTI

New Delhi: Early this week, the Adityanath government in Uttar Pradesh issued a set of dos and don’ts for news channels.

Those conditions were specifically set for TV stations interested in covering the grand ceremony the Ram Janambhoomi Teerth Kshetra Trust has scheduled for August 5, to initiate the construction of the temple at the Babri Masjid demolition site in Ayodhya.

The Ayodhya district administration has categorically sought a written undertaking from channel heads that they would take personal responsibility for the coverage and the panel discussions around it. They have to also ensure that there is no ‘vivadit pakshakar’ (controversial party or litigant) in those shows.

While the media bodies are so far silent on this likely attempt by the state government to take advantage of a communally sensitive situation to dictate how news outfits should conduct themselves, the question remains: who or what qualifies as a “vivadit pakshakar” or controversial party in the eyes of the regime?

Are those litigants who had opposed, at various courts, the demolition of the 16th century mosque the kind of people that TV channels are supposed to avoid that day? Last we heard, the litigants have been sent an invite for the August 5 event. Should they opt to join the ceremony, will they not be counted as ‘vivadit pakshakar’ by the district administration?

What about the opposition parties? Perhaps they represent the collective ‘vivadit pakshakar’? Going by reports, none have been invited to the event so far. The day will be otherwise graced by a galaxy of BJP and Sangh Parivar top guns, starting from Prime Minister Narendra Modi himself.

Still, with the district administration leaving it entirely to media houses to figure out who all are ‘vivadit’ and keep them off their panel discussions and coverage that day, the question needs some attention.

Can some ready help be drawn from the pro-BJP news eco system to carry out the selection exercise? Much before the BJP government in UP had issued that order, specific media arms of the government had anyway been writing the story on the lines of who is a trouble-maker and who is out to put a spanner on this ‘historic’ event.

The pro-BJP Republic TV editor-in-chief has already termed this lot the “block mandir brigade”. His debate to “expose” the “brigade” has so far named Nationalist Congress Party supremo Sharad Pawar, Shiv Sena chief and Maharashtra chief minister Uddhav Thackeray and AIMIM leader Asaduddin Owaisi. Their “campaign against the mandir is getting exposed,” the channel’s viewers were told recently.

Both Pawar and Thackeray had cited the social distancing norms that the Centre itself had advised all citizens to follow to tame the spread of COVID-19. As per the Ministry of Home Affairs’ latest unlock guidelines too, no religious congregation is to be allowed. The UP government had also issued specific orders to the Muslim community in this regard, keeping the August 1 festival of Bakri Eid in mind.

When Owaisi argued that Modi, being the prime minister, must not attend a religious function because it would hurt the secular credentials of the constitution which he as the PM upholds, the channel didn’t engage with that point and instead asked if he was trying to play “mandir-masjid politics”. 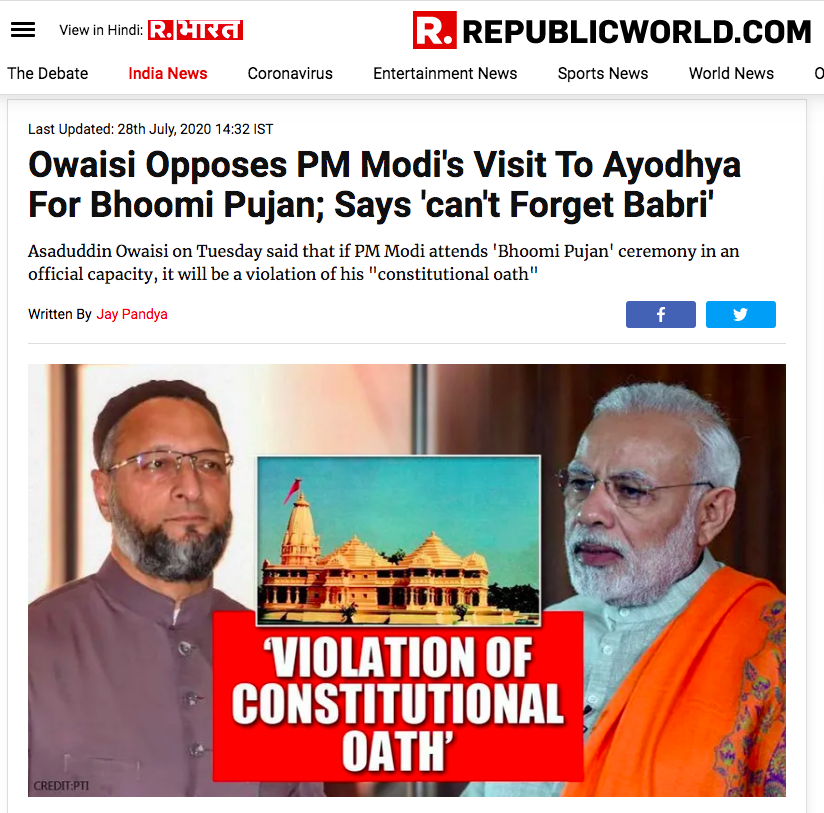 A screen grab from the Republic TV’s website report of the Owaisi debate.

Upon watching Zee News, some more names of possible ‘vivadit pakshakars’ can be gathered. Of course, there is Congress leader Rahul Gandhi, a favourite punching bag of the rightwing news sphere. Gandhi has been bestowed the title of a ‘conspirator’ – as has RTI activist Saket Gokhale – plotting to stall the August 5 event. The purported grounds for this is that Gokhale had filed a PIL at the Allahabad high court seeking a directive from the court to halt the event citing the restrictions around the pandemic.

A photograph of Gokhale with Rahul Gandhi was run on loop to highlight to viewers the ‘connection’ between the two, and therefore the ‘conspiracy’.

Then of course, there is the biggest ‘vivadit pakshakar’ that no pro-government channel can afford to ignore in a panel discussion on any day: “Pakistan”. Zee News, citing unnamed “RAW sources”, claimed that Pakistani secret agency ISI is also out to try and stall the event.

The channel claimed that the ISI is plotting a possible “fidayeen attack” on that day jointly with terrorist groups Jaish-e-Mohammad and Lashkar-e-Tayyaba. It said the terrorists “have been trained in Afghanistan” and ran an entire discussion on it, with all panellists agreeing to the existence of this  ‘conspiracy’. 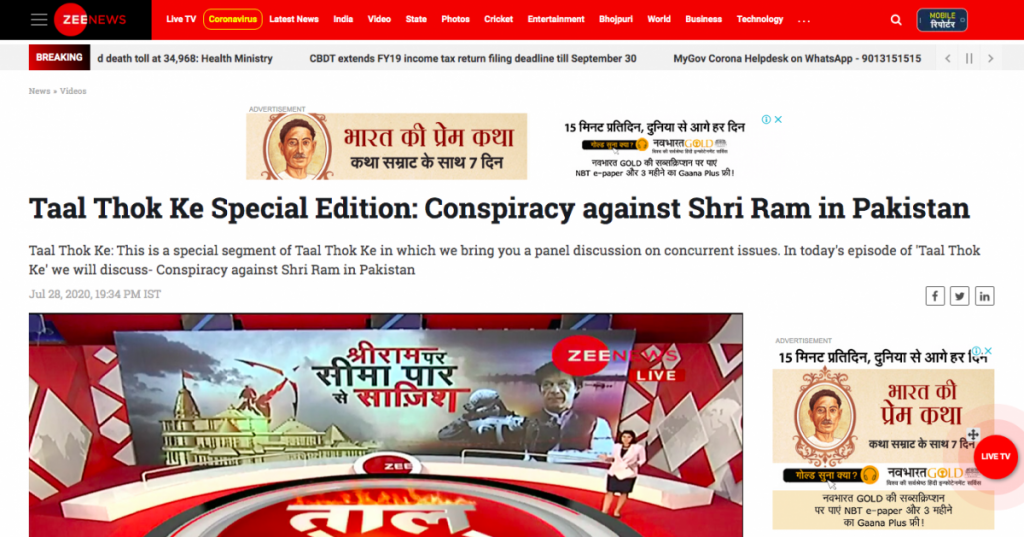 A screen grab from the Zee New website, carrying a report on the ‘Pakistan’ conspiracy against the temple.

Is this a good example of a discussion free of “vivadit pakshapar”?

Such news reports, however, fall in line with the “restoration of national pride” stand – cited in an editorial published by RSS mouthpiece Organiser in its latest issue around the August 5 event.

“…it [the Ram Janmabhoomi movement] was all about the restoration of the national pride. The natural quest for reasserting our civilisational identity was reflected in this [the Ram Janambhoomi] struggle. It was not aimed against anybody but meant for regaining the ‘self’ that was damaged by foreign aggression. Prabhu Shri Ram has been the symbol of that collective consciousness of the nation, that is being restored.”

A look at English propaganda platform, ‘OpIndia’, for possible clues as to who could be a ‘vivadit pakshakar,’ opens up a whole new world for an interested reader looking for some ammunition from the 1990s to mark the moment. What is appalling, though, is that while a list of dos and don’ts may well be brought in for media houses to follow, government-shielded entities are freely publishing  videos of provocative speeches from the run-up to the Babri demolition. The case involving the demolition of the mosque and the alleged criminal conspiracy to bring it down is still pending in court.

A video published by the site includes that famous shot of kar sevaks climbing on to the dome of the mosque to bring it down with inflammatory text: “The movement marked the first step towards reclaiming the birthplace of Lord Ram that was forcibly occupied by Mughal rulers, as a symbol of Islam’s victory over the Hindu faith.”

Other videos featured on the site are L.K. Advani’s speech where he had said “Baccha baccha Ram ka, janambhoomi ke kaam ka”. Advani is facing charges of criminal conspiracy to bring down the mosque.

Yet another video is of the infamous “Haan hum Hindu hain, Hindustan hamara hain” speech of Sadhvi Rithambara delivered in Delhi. In that speech, delivered to thousands of kar sevaks, the sadhvi, who was present at the demolition site on December 6, 1992 and has been charged with criminal conspiracy too, said, “Woh Hindu chahe Musalman, jisko ish desh se pyar nehi, toh phir usko is desh me rehne ka koi adhikar nehi” (‘Whether one is a Hindu or a Muslim, if he doesn’t love this country, then he has no right to live here’).

It would turn out to be the precursor to a popular line these days – ‘Go to Pakistan’.

Will the two categories of people that the Sadhvi had mentioned also qualify to be in the “vivadit pakshakar” category on August 5? Your guess is as good as mine.

One more video published by this propaganda site is that of Vajpayee’s controversial speech delivered on December 5, 1992 in Lucknow’s Amindabad to a large gathering of kar sevaks. The report stated:

“While a large number of people made an invaluable contribution towards the Ram Janmabhoomi movement that led to the demolition of the controversial structure in Ayodhya, one of the most monumental roles was played by none other than former Prime Minister Atal Bihari Vajpayee who had motivated thousands of Hindus to become aware of their civilisational heritage and claim their rights.” 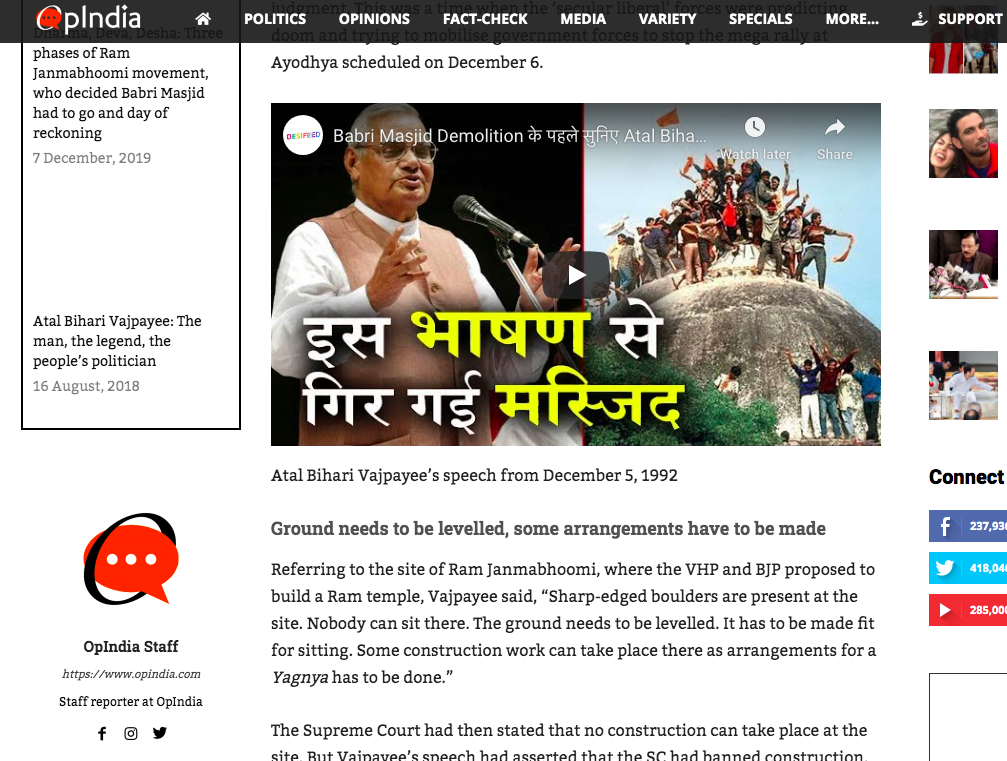 A screengrab of the OpIndia page containing a video of Vajpayee’s speech.

What is eyebrow-raising, though, is that while Vajpayee himself had issued a clarification, essentially disowning his own speech having anything to do with the kar sevaks bringing down the mosque a day later on December 6, thereby shielding himself from legal action, this rightwing website proclaimed: “Is bhashan se gir gaya masjid” (‘This speech felled the mosque’).