The three-member mediation panel constituted by the apex court submitted its progress report on August 1. New Delhi: The Supreme Court is likely to consider on Friday the “outcome” of mediation proceedings conducted by a panel set up to resolve the Ram Janmabhoomi-Babri Masjid land dispute in Ayodhya.

The apex court may decide where to hear the matter or continue with the mediation.

The three-member mediation panel headed by former apex court judge F.M.I. Kalifulla, submitted its report about the progress made in the in-camera mediation proceedings, in a sealed cover on Thursday.

A five-judge Constitution bench headed by Chief Justice Ranjan Gogoi, on July 18, had asked the panel to inform the court about the outcome of the mediation proceedings as on July 31 by August 1 to enable it to proceed further in the matter.

“We request the mediation panel to inform the court the outcome of the mediation proceedings as on July 31 …,” said the bench, also comprising justices S.A. Bobde, D.Y. Chandrachud, Ashok Bhushan and S.A. Nazeer.

The bench, which had perused a report about the progress of mediation process till July 18, had said that its contents will remain confidential as per its earlier order.

Also read: How Modi and Shah Have Harnessed the VHP and its Ayodhya Bluster

It had requested Justice Kalifulla to apprise it by July 18 about the progress of mediation till date and its present stage.

It had passed the order while hearing an application filed by a legal heir of one of the original litigants, Gopal Singh Visharad, seeking a judicial decision on the dispute and conclusion of the mediation process, alleging that not much was happening there. 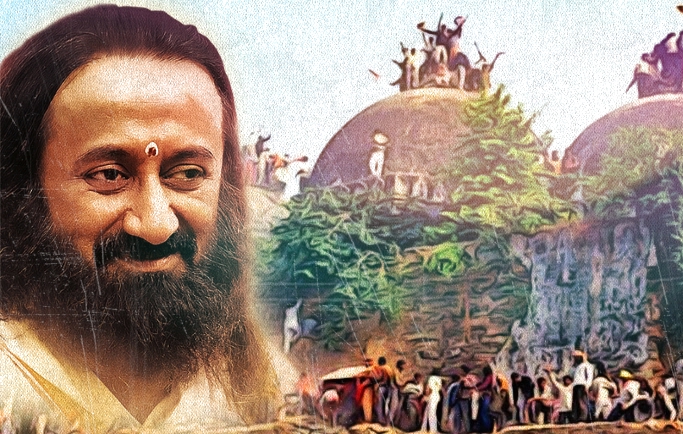 One of the members of the panel, Sri Sri Ravishankar, had made some controversial comments on the issue. Illustration: The Wire

The panel, also comprising spiritual guru and founder of the Art of Living foundation Sri Sri Ravishankar and senior advocate and renowned mediator Sriram Panchu, was earlier granted time till August 15 by the apex court for completion of mediation after its earlier report had said that the mediators were “optimistic” about an amicable solution.

The top court had fixed the seat for the mediation process in Faizabad of Uttar Pradesh, around 7 km from Ayodhya, and said adequate arrangements, including those related to the venue of the mediation, place of stay of the mediators, their security and travel, should be arranged forthwith by the state government so that the proceedings could commence immediately.

The bench was earlier told by Hindu bodies, except the Nirmohi Akhara, and the Uttar Pradesh government that they were not in favour of the court’s suggestion for mediation. The Muslim bodies had supported the proposal.

Indian Express has reported that it is not clear whether it will be taking up appeals against the September 30, 2010 verdict of Allahabad high court for day-to-day hearing.

Fourteen appeals have been filed in the apex court against the 2010 judgment, delivered in four civil suits, that the 2.77-acre land in Ayodhya be partitioned equally among the three parties, the Sunni Waqf Board, the Nirmohi Akhara and Ram Lalla.

The Supreme Court has been eager to maintain status quo over the land, maintaining that it should neither be handed over by the government to anyone nor shall any part of this land be permitted to be occupied or used for any religious purpose or in connection. It shall be retained by the government till the disposal of the case, the court had said.

On December 6, 1992, the Babri Masjid, constructed at the disputed site in the 16th century by Shia Muslim Mir Baqi, was demolished.