Twenty-seven years later, the cases are still continuing and the victims have not received justice. 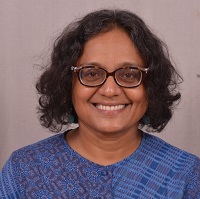 A survivor of the 1992-93 Bombay riots has this memory of former Mumbai police commissioner Ram Deo Tyagi who was her father’s friend. Journalist Haroon Rashid lived in Diamond Jubilee Compound, near SK Patil Udyan in South Bombay and Tyagi, then joint commissioner of police (crime),  was a regular visitor to the house.

On January 7, 1993, a day before their house was attacked and later burnt down by a mob, Tyagi assured Rashid that nothing would happen even though the city was in the throes of violence and tension was rife in this “Hindu” area. He trusted Tyagi a lot and to his family’s utter terror, refused to leave till moments before a huge mob descended on the area and wrecked their home.

Tyagi’s death on Friday brings back memories of those horrific weeks in December 1992, and January 1993 when Bombay burned. According to official estimates, 900 people died in the riots and over 2,000 were injured, but many more homes and lives were destroyed and some people are still missing.

Tyagi may have inspired such fierce loyalty among his friends, but two days after he assured Rashid of safety, the events at Suleman Usman Bakery, on January 9, not far from the Diamond Jubilee compound, would shadow him for the rest of his life. His role in this incident invited a searing indictment from the Srikrishna Commission, which inquired into the 1992-93 riots. Tyagi was never found guilty, but for some of the witnesses in that case and survivors, there is no closure.

He was among the senior-most of the 31 policemen indicted by the Srikrishna Commission for their role in the riots. While seven policemen continue to stand trial in a sessions court for the Suleman Bakery case in Mumbai, Tyagi and eight others were exonerated by the Supreme Court in 2011 after the case went through lower courts. He not only became Mumbai police commissioner but went on to become the director-general, National Security Guard and later founded a security agency.

The events of the Suleman Usman Bakery case bear repetition here. On the morning of January 9, 1993,  a police picket opposite the Bakery reported firing from the rooftop and a police inspector Anant Ingale even saw people with automatic weapons there. When Tyagi, accompanied by a Special Operations Squad (SOS), arrived on the scene, the people inside the bakery threw bottles and other missiles at them. The SOS then entered the bakery and claimed they were attacked with knives and choppers. In the crossfire, the police claim some escaped and 78 persons were arrested and nine killed.

Inspector Ingale, in his evidence later, wasn’t even sure if the men on the rooftop of the bakery had any weapons. Also, the commission felt that “the story put forward by the police that they met with armed resistance from the persons on the roof hiding behind the water tank is unbelievable.” The postmortem of the dead persons showed evidence of being shot in the back. The police recovered no firearms except for one spent shell from an AK 47. There was no panchnama made on the alleged recovery of five swords from the water tank on the rooftop.

The Commission believed the testimony of public witnesses and the evidence of teachers and students of the adjacent Madrassa e Darul Ulum Imdadiya, that the police barged into the bakery and the madrassa and the Chunabhatti mosque next to it and went on a rampage, assaulting the people there. Its report said, “It also appears that there was indiscriminate and callous police firing resulting in 9 casualties.”

The Commission observed, “This is one incident where the police appeared to be utterly trigger happy and used force utterly disproportionate to meet the apprehensions of private firing, assuming there was one,” and placed the responsibility of the incident squarely on Tyagi, who was in-charge of the operations, and assistant police inspector Deshmukh and Police inspector Lahane who were leading the SOS. 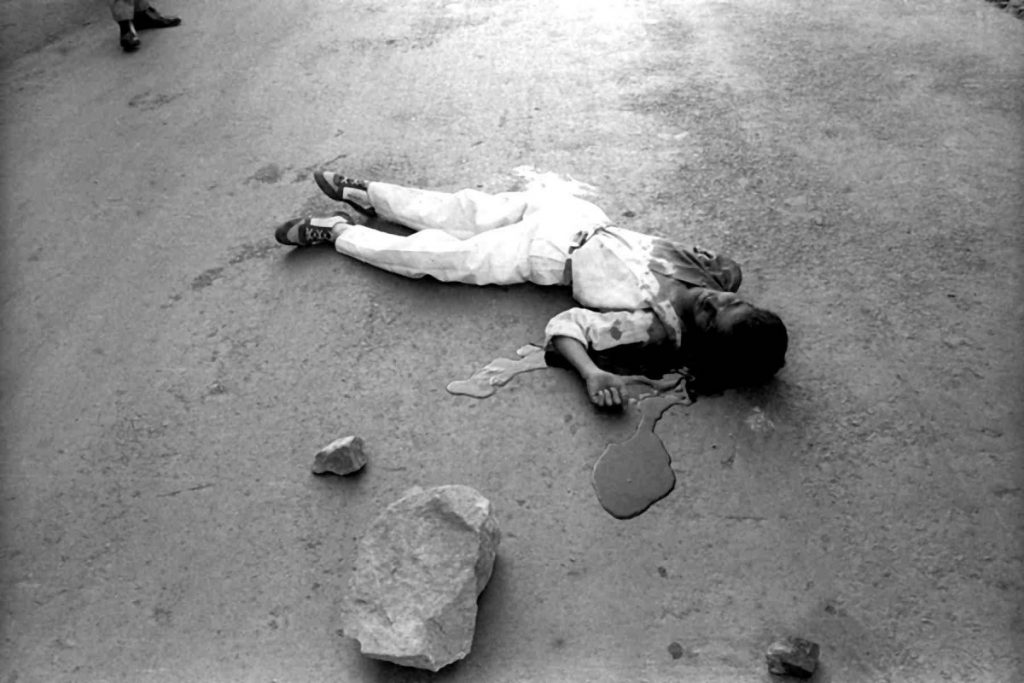 A victim of the Bombay riots in Mohammed Ali Road. Photo: Sudharak Olwe

In his testimony to the Srikrishna Commission, regarding the Suleman Bakery incident, Tyagi said he had gone to the location but he did not enter the bakery. His instructions to the SOS were to enter the bakery and arrest those firing from inside. He admitted that the number of casualties was a surprise and it should have been much less. He said he had not ordered the firing and the “miscreants” wielding firearms had managed to escape. However, the Commission in its report, said that after examining the evidence on record, the story of the police did not inspire credence.

Despite all the evidence in the Commission’s report, successive state governments refused to take action. There was little surprise when Tyagi joined the Shiv Sena in 1998 after his retirement and even contested elections on a party ticket to the Maharashtra legislative council in 2000, which he lost. It was the Sena which jumped to his support when he was arrested in August 2001, after a Special Task Force (STF) reopened cases against riot accused. Tyagi was arrested after the Supreme Court refused him anticipatory bail, which he described as a humiliation. His arrest evoked strong reactions from the Shiv Sena and the Bharatiya Janata Party (BJP) and prompted then city police commissioner M.N. Singh to remark that this was the “darkest chapter” in the history of the city’s police force.

The state government filed a case in 2001 against 18 policemen in this case, but nine of them – including Tyagi – were discharged in 2003 by the trial court. However, there was no appeal against the discharge as the then state public prosecutor had opined that there was not enough evidence to challenge it. It was left to a survivor of that morning, the late Nurul Huda Magbool Ahmed, who challenged this order of discharge in the high court. To his anguish, the Bombay high court upheld the lower court order as just and legal. Justice Mridula Bhatkar in her order of October 16, 2009 described the firing as a “cruel and atrocious act on the part of the police” but ruled that the evidence was insufficient against Tyagi and the other policemen that they had common intention to murder the inmates of the bakery. 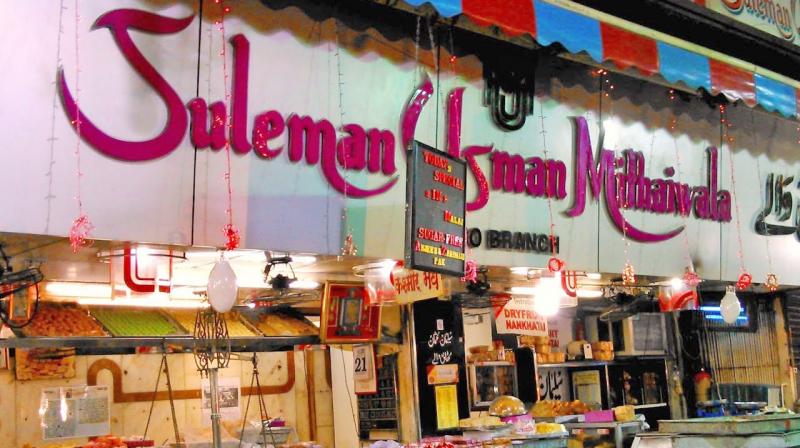 Ahmed then filed a special leave petition in the Supreme Court, which was dismissed in 2011. The apex court absolved Tyagi and the eight other policemen, upholding the high court order. However, in 2019, the case came back for trial once again. The trial court had recommended proceedings against the remaining policemen and seven of them are facing trial (two have passed away) in this case at the sessions court right now.

Tyagi had also skirted the issue of communal bias in his evidence to the Srikrishna Commission which recorded:

“To a pointed question as to whether in his assessment, there was any communal bias on the part of the constabulary in handling the riot situation, he [Tyagi] also diplomatically replied that in any society, unless people educated, there is bound to be a hidden bias in the minds of every person belonging to one community against the other and that such bias must have  surfaced.”

He was against handing out “huge amounts of compensation” to the families of persons killed in police firing while taking part in riots, saying it would set a bad precedent.

Before joining the police, he had a brief career in the Indian Army in 1962 as an Emergency Commissioned Officer and took part in the Indo-Pak war of 1964-65. He was awarded the Raksha Medal and the Samar Seva Star for his services. After a five-and-a-half-year stint, he joined the Indian Police Service and reached the top post in Mumbai.

Tyagi was also in the news a few years ago as Lalit Modi’s advisor and among those who backed Modi in his immigration plea in the UK. In an interview to NDTV, Tyagi had said that Modi was only accused of Foreign Exchange Management Act (FEMA) violations and, legally, there is no provision for arrest or custodial interrogation. He said he worked pro bono as Modi’s advisor.

Ram Deo Tyagi was a controversial figure and he will also be remembered for issuing orders to the city police not to record cases under Section 498A of the Indian Penal Code (husband or relative of husband subjecting a woman to cruelty), as he felt that many of them were false cases. I had reported this for the Times of India and the move drew strong criticism from women’s groups and lawyers. However, earlier he had instituted special squads to curb harassment of women in the city.

Meena Menon is an independent journalist and author of Riots and After in Mumbai and other books.