Why the Political Atmosphere in Rajasthan's Pokhran Has Turned Communal 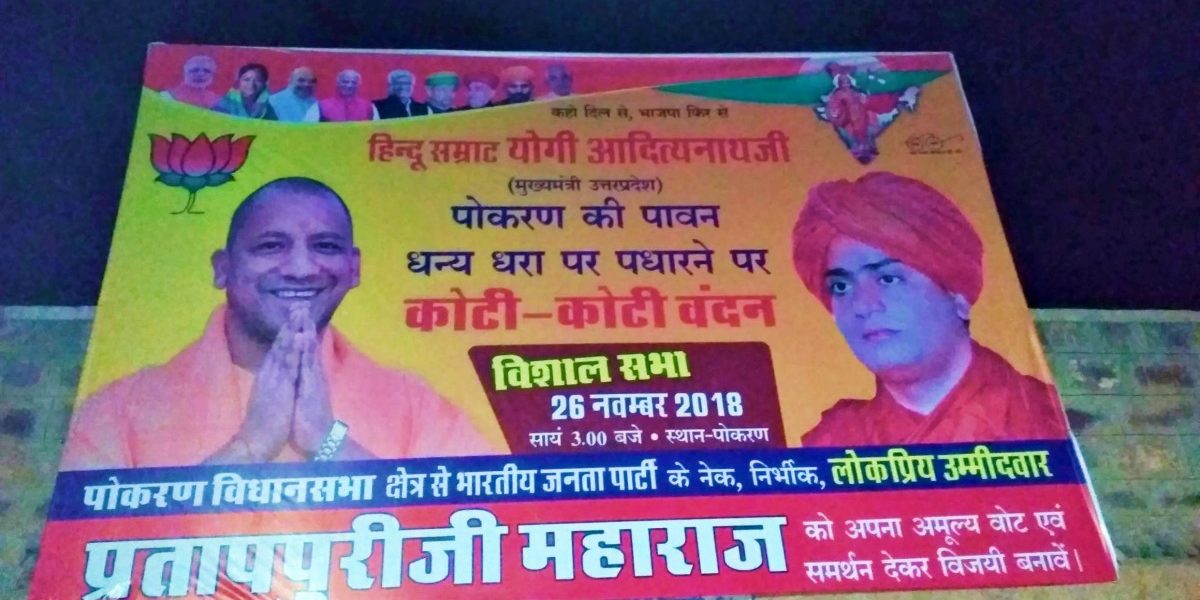 Pokhran (Rajasthan): It might be winter in Delhi and Jaipur, but the temperatures in Pokhran, Rajasthan, are enough to induce a sweat. Some of the heat is weather-related, to be sure, but the rest is political.

Anyone travelling from Barmer into Pokhran is greeted by a poster featuring Yogi Adityanath, the “Hindu king” chief minister of Uttar Pradesh, and the local BJP candidate, Mahant Pratap Puri, who is the head of the Taratara math. Just next to that one is another poster, featuring Congress candidate Saleh Mohammad and Congress president Rahul Gandhi. The two posters reveal more than enough about the atmosphere in Pokhran.

In a public meeting held in Pokhran on November 26, Adityanath said, “Rahul Gandhi went to Ajmer Sharif and spoke about his gotra. Oh Rahul, your grandfather used to say that he was an ‘accidental Hindu’! We should feel pride in being Hindu.”

Mahant Pratap Puri said at the same meeting, “Whenever there have been tests here, the land of Pokhran has been successful. There is another test on December 7. It is a yagya for the sake of the nation, in which you, not I, will succeed.”

Also read: In Tonk, BJP Divided Over Muslim Candidate, But Path Not Easy for Sachin Pilot Either

Spending a day in Pokhran is enough to learn the significance of Mahant Pratap Puri’s use of the word “test”. It can also be gauged from the statement made by Jugal Kishore Vyas, the BJP chief of the district of Jaisalmer, during an election rally: “They say Ali-Ali, we say Bajrang Bali. For them the cow is an animal, for us the cow is our mother.”

Just a few days before, on November 23, Puri asked for votes on the basis of religion during a satsang event in the village of Bhaniyana. The returning officer has issued a notice to Puri and asked for a justification.

On November 26, Rahul Gandhi was in Pokhran in Mohammad Saleh’s support, and he said, “You work for the Congress party, and therefore you should express yourself with politeness. There is no need to get inflamed. You do not belong to the RSS or the BJP. You should even speak of them with decorum. Be it the chief minister or the prime minister, you should only use proper and appropriate words for them.” 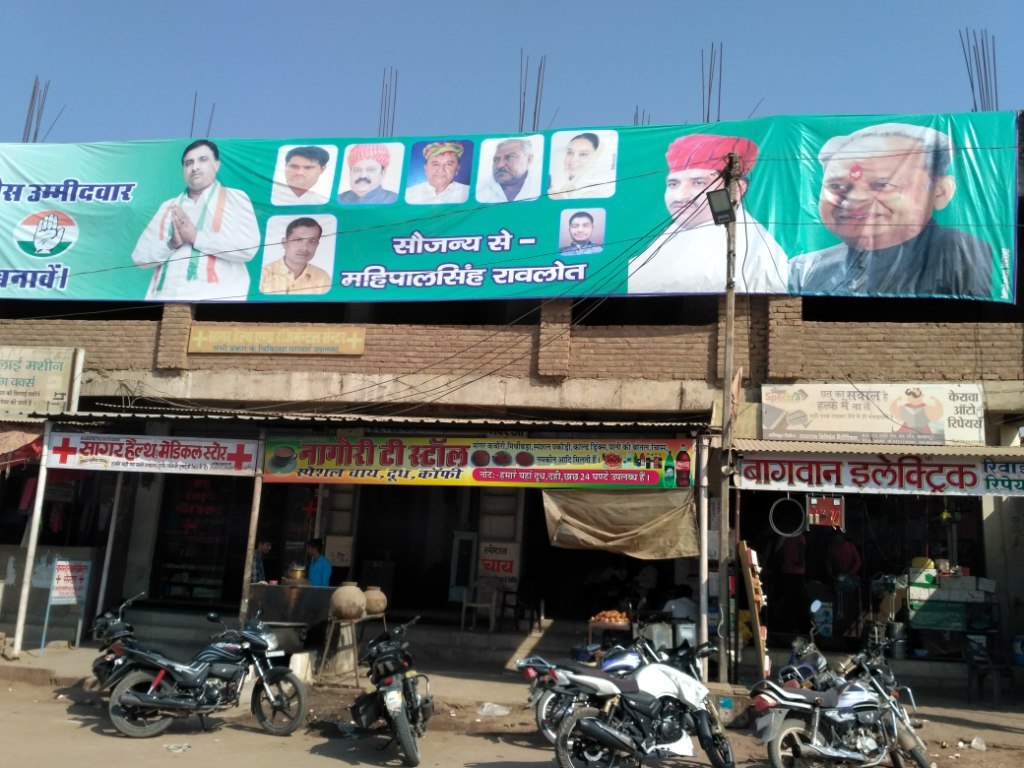 Religious mobilisation is on in full force in Pokhran. While the upcoming elections are a “test” for Puri, they are an opportunity for former MLA Saleh to contest the seat for the third time.

In 2003, Saleh lost to BJP candidate Shaitan Singh by nearly 35,000 votes. This time, however, the BJP did not give Shaitan Singh a ticket and has instead decided to field a religious leader.

There are 2,00,000 voters in Pokhran, including 50,000 Muslims and 45,000 Rajputs. There are nearly as many Dalit voters as there are others. The Congress hopes that the Muslim as well as the Dalit votes will go to them, which the BJP wants to prevent at all costs. In this fight for power, the atmosphere in Pokhran is slowly turning from political to communal.

It is important to determine what the people of Pokhran really want and how harmful this religious polarisation is to their interests.

Lalaram, a priest at a temple of the Dalit goddess Dali Bai and a resident of Ramdevra, told The Wire, “In the villages around Ramdevra, in Viramdevra, Ekam, Goliyon ki Dhani, Dudhia and Rathora, there is only salty water. There is no water in these villages from the Indira Gandhi canal. Fresh water has been released into the pond in Ramdevra for devotees to be able to bathe in, but the 15,000 people of Ramdevra are otherwise forced to consume salt water.”

He continued, “Just about 500 metres from the village, there will be a pipeline from the Indira Gandhi canal that will supply water to Pokhran. Because this is a desert region, the houses are more spread out, and most of the people who live in the dwellings are Dalit. They have to pay Rs 500 to Rs 800 to have a freshwater tanker deliver water to them.”

Lalaram is also the head of the Dalit Adhikar Abhiyan. According to him, “The first time Hindu-Muslim polarisation appeared was 20 years ago when Mohammad Saleh’s uncle Fateh Mohammad contested the elections from here. At that time, Ghulab Singh was the BJP candidate. Since then, whenever Muslim and Rajput contenders go up against each other in the elections, the atmosphere here becomes communal. In the rest of Pokhran, there is no tension between Hindus and Muslims. They participate in each other’s weddings and share each other’s joys and sorrows.”

The Bahujan Samaj Party (BSP) candidate contesting from Pokhran, Tulcharam Meghwal, said, “Religion is not in danger, and neither Hindus nor Muslims are in danger. It’s our children who are in danger. Untouchability against Dalits is practised here. At the time of childbirth, a male doctor delivers the baby, because there are no female doctors in the district hospital of Pokhran. But the Congress and the BJP ignore these issues and try to win votes on the basis of religious polarisation.” 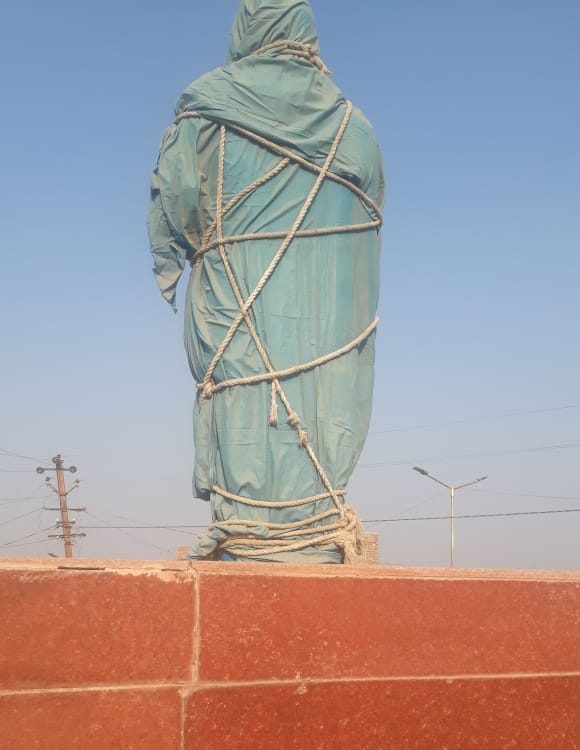 The covered statue of Ambedkar in Pokhran. Credit: Madhav Sharma

That Dalits are discriminated against in Pokhran becomes clear when one takes a look at the Ambedkar Square in the middle of the city. The statue of Ambedkar in the square has been covered with a cloth for the past 25 months. It was also damaged five times during the BJP’s tenure.

The police has not been able to take any action on this. Harjesh, a resident of Pokhran, became emotional when he talked about it. He said, “It is embarrassing for me to walk in this square, because although we are fighting for our leader, we are not able to get justice for him.”

Another resident of Pokhran, Shiv Prakash, said, “During the BJP’s tenure, 150 primary schools in Pokhran were shut down. In the name of improvement, schools were shifted 6-7 km away. The villages and settlements in which the schools were shut down are mostly inhabited by Dalits and poor people. How can their children go to schools that are located so far away? And what about girls, who are anyway not expected to study in this region?”

Revtaram, a social worker belonging to the Urmula Marusthaliya Bunkar Samiti, said, “There is a famine here every three years. Fodder costs Rs 1,200 per quintal, stray animals are ruining the crop, the schools that the government has chosen to improve do not have principals. These issues have not been raised even once in the election rallies, whereas other useless issues are ceaselessly brought up.”

Amatullah Mehar, Congress leader and chief of the Sankra panchayat, said, “The elections are being fought on the basis of religion, but our candidate is contesting elections for the third time. The BJP has replaced the formerly victorious Shaitan Singh with a religious leader. We have not held any meetings in the name of religion. Pratap Puri asked for votes in the name of Ram, for which reason the Election Commission issued him a notice. Yes, there are some people who are trying to polarise the atmosphere. If the issue of religion becomes predominant, that would be a great loss for the people of Pokhran.”

On the other hand, Jugal Kishore Das, the BJP chief for the district of Jaisalmer, said, “Religion is duty. Our leader, Mahant Pratap Puri, has come to instruct people on the religion of humanity. These people do not understand the religion of humanity. In Pokhran there is one family who does not want anyone else to have the opportunity to govern. Since this man (Saleh Mohammad) came to Pokhran, there has been factionalism.”

Madhav Sharma is an independent journalist.

Translated from the Hindi original by Karan Dhingra. You can read the Hindi version here.