From 'Gang Buddies' to 'Hum Hindu, Tu Mulla': The Many Sides of Rahul Khan's Murder

The three accused were good friends of Khan's. While the police say a 'drunken brawl' led to the attack, his family believes the communal angle cannot be ignored.

Palwal (Haryana): Twenty-three-year-old Rahul Khan was killed near Haryana’s Rasoolpur village. After being assaulted and left severely injured, he breathed his last on December 15.

His close friend Kalua and two other friends, Vishal and Akash, were arrested by the police a few days later. While the family has said that Rahul was 23 years old, his death report at the hospital says that he was 22.

Earlier, Kalua had told the family that Rahul had collided with a vehicle, and the family had filed an accident-related FIR in the Chandhat police station. The three accused – Vishal, Om Pal alias Kalua and Akash urf Diljale – were arrested only after a video of Rahul’s assault came to light.

In the video, Rahul can be seen bleeding and severely injured. One of the attackers can also be heard calling the victim “Mulla” (a derogatory word used for Muslim men) and saying “Hindu hain hum (We are Hindu)” while repeatedly hitting Rahul on the face with a stick. 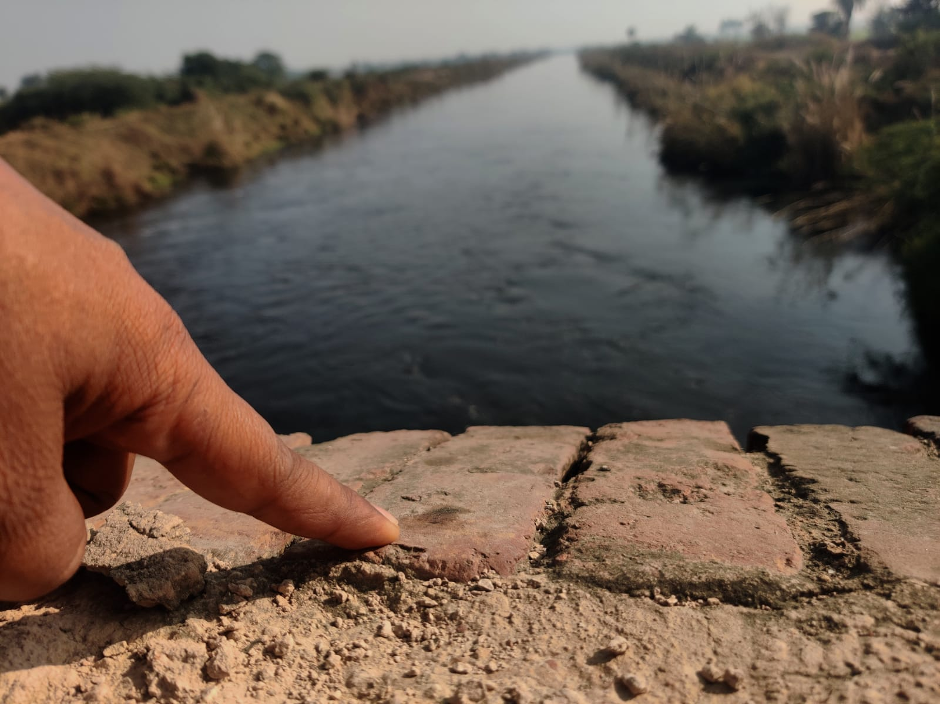 The spot where the viral video was shot still has blood marks. Samples from here were taken during investigation by the local police. Photo: Ismat Ara/The Wire

After this video surfaced, the family submitted another complaint and added other crucial details on the basis of which the police later arrested the three men and booked them under Section 302 (murder) of the Indian Penal Code (IPC.)

Another video showing Rahul admitted in the hospital was uploaded with a background song by a Facebook profile with the name ‘Sunil Chahal Chahal’, but was later deleted.

Rahul was 65-year-old Rajjo’s only son. She sits outside her newly acquired house in Sarai Khatela village, the first house her family has ever owned, surrounded by women from the neighbourhood. 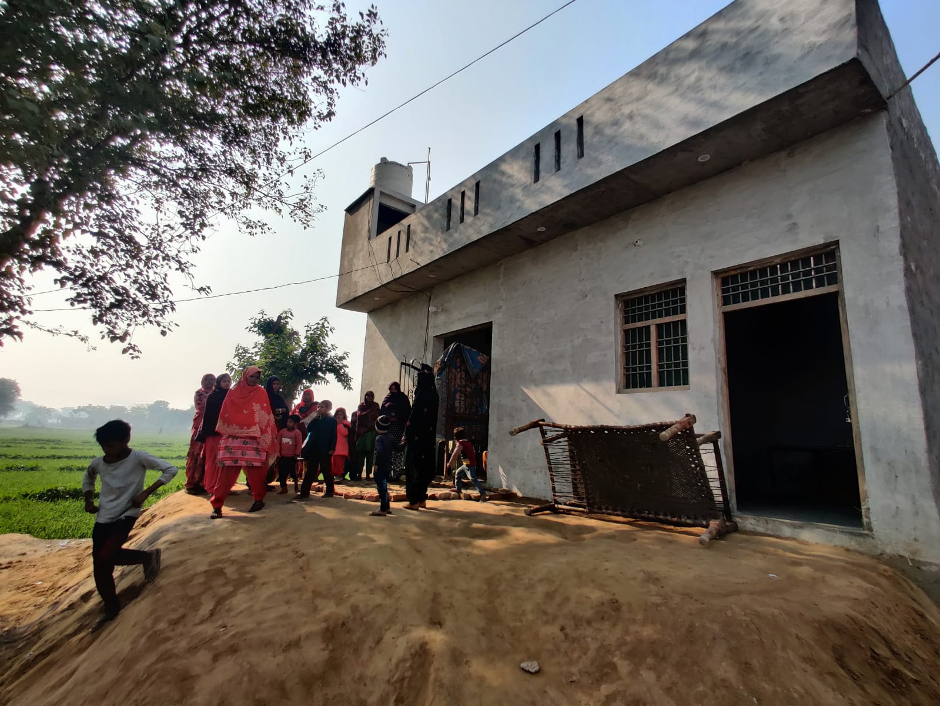 The family had only shifted to this new house on December 13. Photo: Ismat Ara/The Wire

“My husband’s retirement funds, his whole life’s savings were used in getting this house made. But my son couldn’t even sleep one night in this house,” she told The Wire, as the family had shifted from Rasoolpur to their new house the same day that Rahul was attacked. The family does not own any of the lush green farms that surround the house.

According to his family, Rahul does not have a high school degree and worked as a bike mechanic in Palwal. Rajjo said he used to earn roughly Rs 300 every day. Both of Rahul’s sisters, Samia and Razia, have returned from their in-laws’ homes to attend to their ailing parents, who they say have no other support system.

Rajjo narrates the incident without a tear at first. “Kalua was a friend of my son’s. Why did he kill his friend? We trusted him when he said that it was an accident because we thought he was a friend, why would he lie?” she asked. Then breaking down, she points to her husband, who is lying in a cot nearby.

“He used to work in Indian Railways and saved his entire life for this house. He wanted to secure Rahul’s future. But now, look at him,” she said. When this correspondent approached him, a neighbour told her that his health has been deteriorating since he heard about the news.

Losing him was a shock but losing him in the way that he did is too much to bear, his neighbours say. 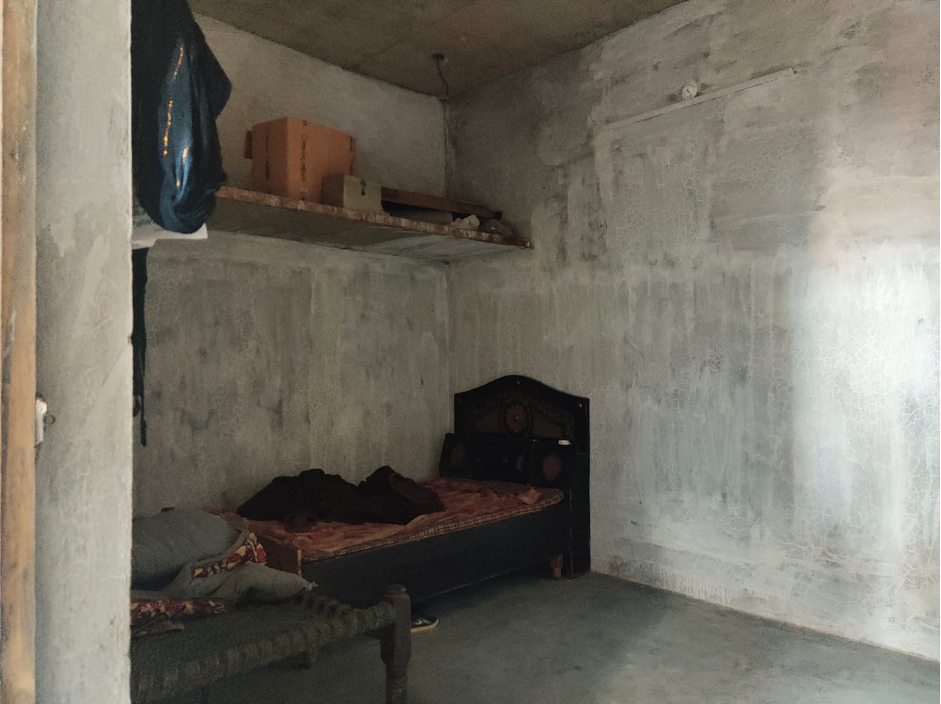 Rahul and his wife’s room in the new house. Photo: Ismat Ara/The Wire

“Gham me hain, BP badha rehta hai, din me do baar doctor ko bulana padta hai dekhne ke liye. Apne baap ka dulara tha Rahul (He is in pain and his blood pressure has shot up. We have to call a doctor twice to check on him. He was very fond of his son),” a neighbour said.

With some difficulty, Rahul’s father manages to ask, “They have arrested the three boys. But will they get punished?”

Rajjo added, “My son’s nails had been taken out with a plier. His eyes and nose were filled with mud. How will I live? The way he was murdered…an example should be set out of his murderers so nobody ever again dares to lynch another woman’s son.”

In 2017, a verbal spat in a train that had escalated to communal slurs that ultimately led to 16-year-old Mohammad Junaid being grievously injured and thrown out of the train to die. Later, his death inspired a series of protests across the country against mob lynchings under the banner “Not in my name”.

In 2021, when the country was still grappling with the aftermath of a devastating COVID-19 wave, a 27-year-old gym trainer, Asif, was murdered while on his way back to his house in Khera Khalilpur village in Haryana’s Nuh district. 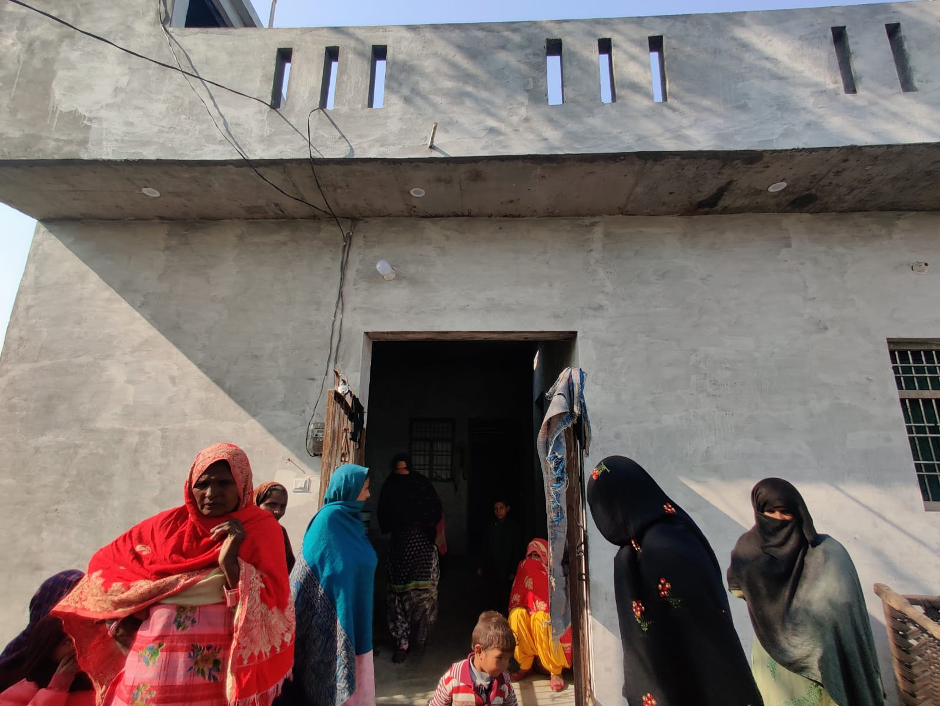 Rajjo is surrounded by many neighbours who expressed worry about the safety of their children. Photo: Ismat Ara/The Wire

Rahul’s mother, referring to both these cases, says that the Muslim community in Palwal region had not yet recovered from Asif’s recent murder.

“First Junaid, then Asif…now my son was hit with an axe in his head, his legs were nailed and broken, his nails pulled out with pliers…” his mother said while recounting how she saw his body.

Further, she said, “How is mob lynching of Muslims happening without any fear of punishment? Does the police only belong to the rich, influential or famous? Is there no justice for Muslims because they are scared, vulnerable or easy targets? If the victim was someone rich, the local MLA or MP would have at least come to express sadness.”

Also read: NCM Claims There Are ‘No Religion-Based Atrocities Against Minorities in India’. How True Is it?

A series of murders, fear

There is a sense of gloom in Sarai Khatela, a Muslim-dominated village, after Rahul’s murder. Most families are now terrified of letting their their sons leave the house.

Don’t go out after 6:30 pm, don’t make new friends, work somewhere safe – new rules have been laid out by several mothers for their sons. “Dehshat” is the words that residents of this village use to describe the fear engulfing the residents after the chilling murder.

According to Rahul’s wife Shahina, almost the same age as him, Kalua used to ask him for loans repeatedly. She said, “When he refused, they would keep pushing him. He had loaned them money many times, but they never repaid him. Kalua was into dacoity and other petty theft, so I never liked him.” 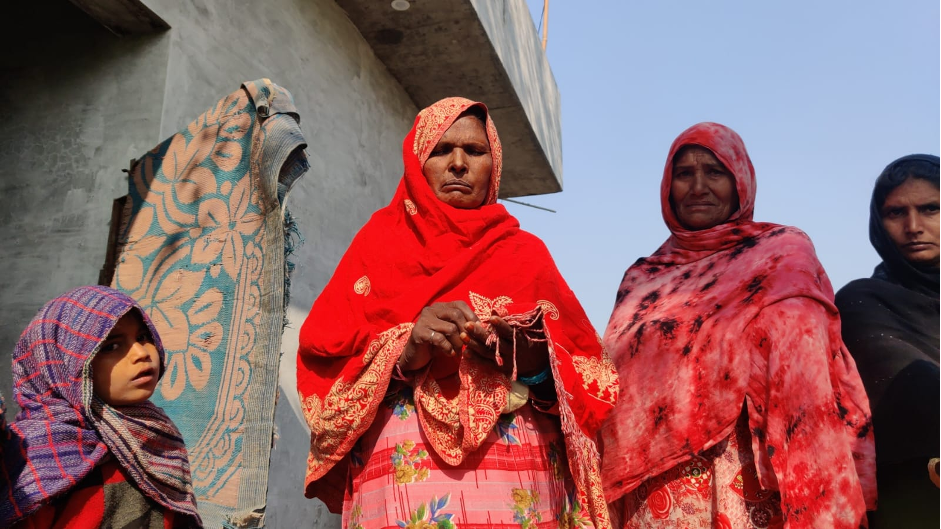 Shahina’s mother worries about her daughter after her husband’s death. “She will have to fend for herself now,” she says. Photo: Ismat Ara/The Wire

Shahina was still grappling with the loss of two children – one to a miscarriage and the other who was stillborn – when she also lost her husband.

She told The Wire that her husband while admitted in the hospital told her, “Kalua se poochna, haath pair tod deta, lekin jaan kyun le li meri? (Ask Kalua why he took my life when he could have just broken my legs and hands?)” 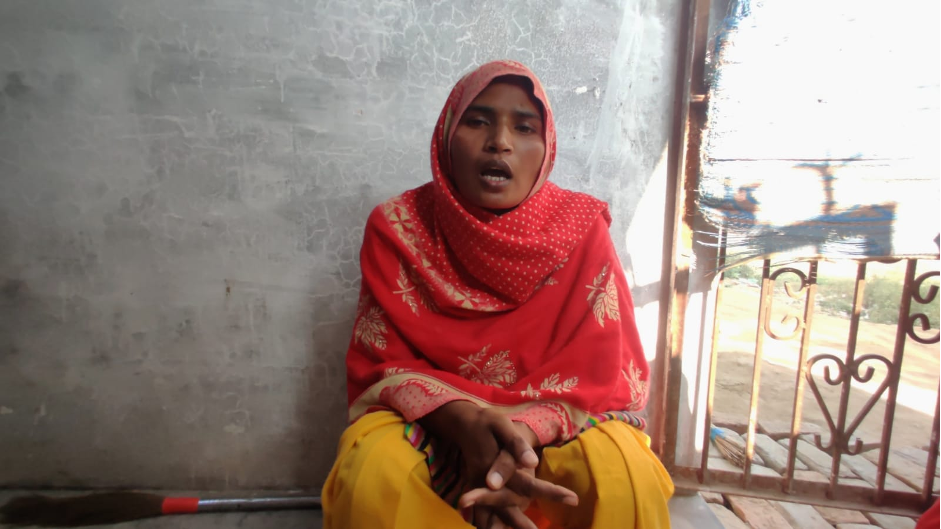 Shahina says that she is uneducated but will look for unskilled jobs to earn some money and look after the house. Photo: Ismat Ara/The Wire

The Wire’s correspondent went to the main accused Kalua’s house to meet his mother, known as “Bangalan” in her village. She lives in a small, one-room house covered in mud, surrounded by unpainted walls. Belongings are scattered around the room. Since her son was arrested in this case, she has been by herself as there is no one else in the family. 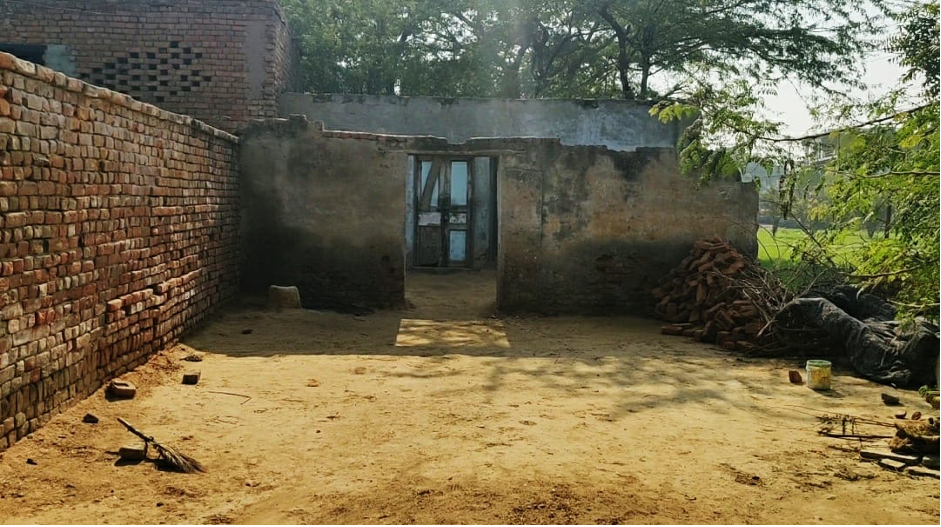 Kalua’s mother Shakuntala told The Wire that she was not in the village when the incident took place. “I was attending a wedding in Bihar,” she said. She adds that the four boys were part of the same “gang”. She also says that her son never gave her any money. “He used drugs and was an alcoholic,” she said. 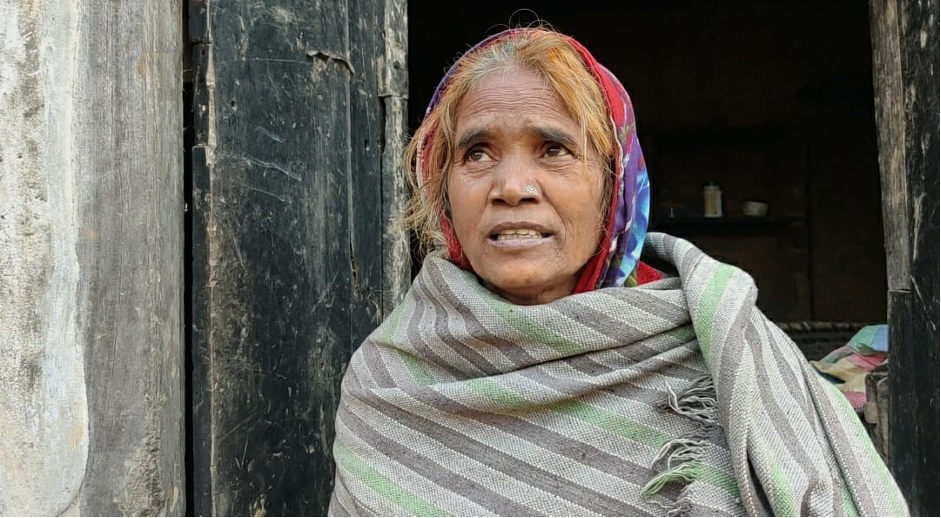 The villagers also tell a similar story. “The four were friends and equally infamous for petty crimes. Nobody liked to call them to their house,” Ajay, a shopkeeper near Kalua’s house, said.

Another one added, “It was a local, small gang to commit petty crimes like snatching and theft. Some quarrel over the division of money they had stolen must have led to this incident. …It is hard for us to believe that they killed Rahul because he was Muslim. The whole village knows they used to eat from the same plate and were gang buddies.”

According to the villagers, Kalua had been arrested for petty crimes by the local police several times.

Rahul’s family said that the four were very close friends but denied that he used to participate in petty crimes with Kalua. “He has not ever been arrested by the police for any such crimes. If he was part of something like that, surely he would have been caught by the police at least once,” Rahul’s brother-in-law Akram said. He is looking after the formalities and documentation work in the case.

Akram, recalling the case, said that Rahul was forcefully taken away from a wedding function on December 13 that the family was attending in Rasoolpur by the accused.

“Later that day, we got a call from Kalua saying that Rahul had met with a terrible accident and he had brought him to his house. When one of our relatives went to his house to check, he was abused. They told him, ‘Tu bhi aa gaya mulla? Tu bhi marega (You are also here, you mulla? You will also die).’ Shortly afterwards, we saw the viral video and found out the truth,” he said.

Before Rahul’s death on December 15, Akram said, Rahul had told his wife everything. Akram said that the government must seriously consider introducing a law against mob lynching in Haryana.

The SHO at Chandhat police station confirmed to The Wire that the three accused – Vishal, son of Munesh, Om Pal alias Kalua son of Chajjan and Akash urf Diljale son of Ram Kishan – have been arrested on charges of murder as they have confessed to the killing following a brawl in an intoxicated state.

On the allegations of the incident being a hate crime, DSP (City) Palwal Yashpal Khatana said that the video made by the accused is subject to forensic analysis.

Akram also said that the investigating officer told him that the murder was the result of a drunken brawl between the four when Rahul took away Kalua’s phone in “fun and games”.

“The police must investigate the communal angle in this case. There is clear evidence,” he added.