Punjab: Muslims Families Hide in Riverbed After Being Driven From Hoshiarpur Villages

After three days, the families were brought some ration by the authorities. However, no case has been filed against those who beat and abused them. 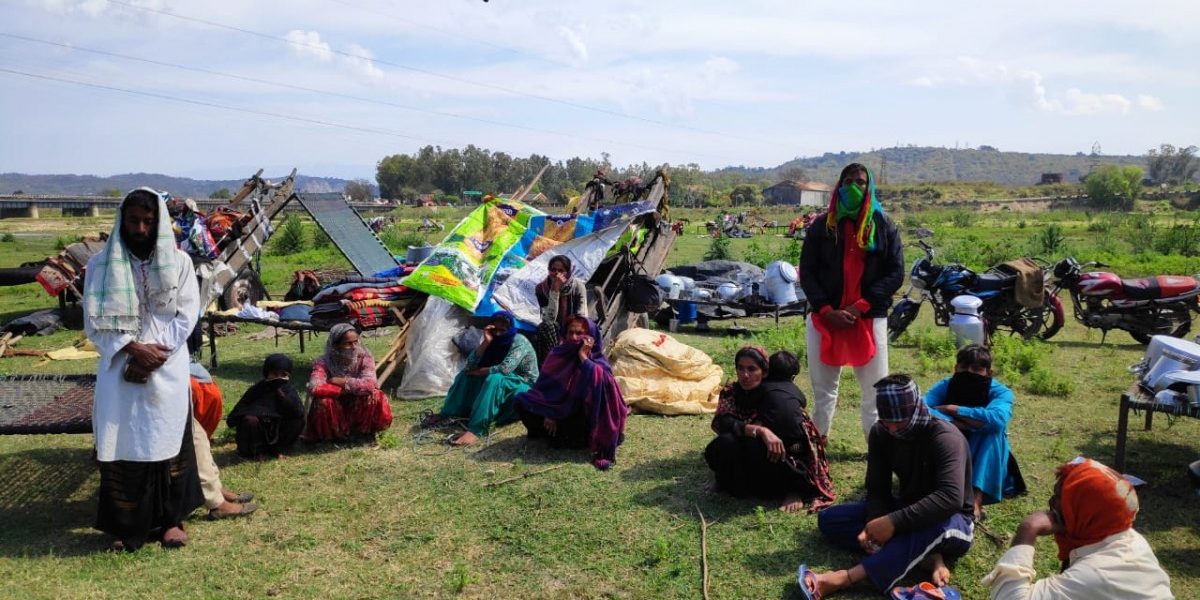 The families camping in the Swan riverbed. Photo: Prabhjit Singh

New Delhi/Hoshiarpur: Several children, women and men on Wednesday continued to hide themselves in the Swan riverbed, without for the food for three days now, on the Punjab side of the state’s marshy borders with Himachal Pradesh. They were allegedly abused, beaten and chased away from their mud-house settlements in villages in the Talwara block of Hoshiarpur district.

“I asked them (the villagers from the Hindu-majority community) why are they beating us, and they started hurling abuses and calling us sick,” said Saraaj Deen, who led a large contingent of hungry children, women and men of seven-eight joint families as they were uprooted from their settlement.

“Even the police are not allowing us to move on to the adjoining Himachal, where we live in the summers,” he said.

His mother, aged 80, was denied the medicine at the chemist shop where the shop owner snubbed him as “sick Muslims spreading virus”, Saraaj’s wife said.

Saraj’s fellow tribal Shafi Mohammad explained that the people in the surrounding villages were harassing and humiliating them ever since the Tabhlighi Jamaat incident of Delhi. “None of us has ever seen Delhi, but the people here are still after our lives with no help from the administration,” he said.

The two men held up their Aadhaar cards, saying they were of no use in this crisis.

These joint families were a group of around 80 people in all, including children, who slept hungry under the open sky, without any ration, as their SOS calls had fallen on deaf ears the day before. 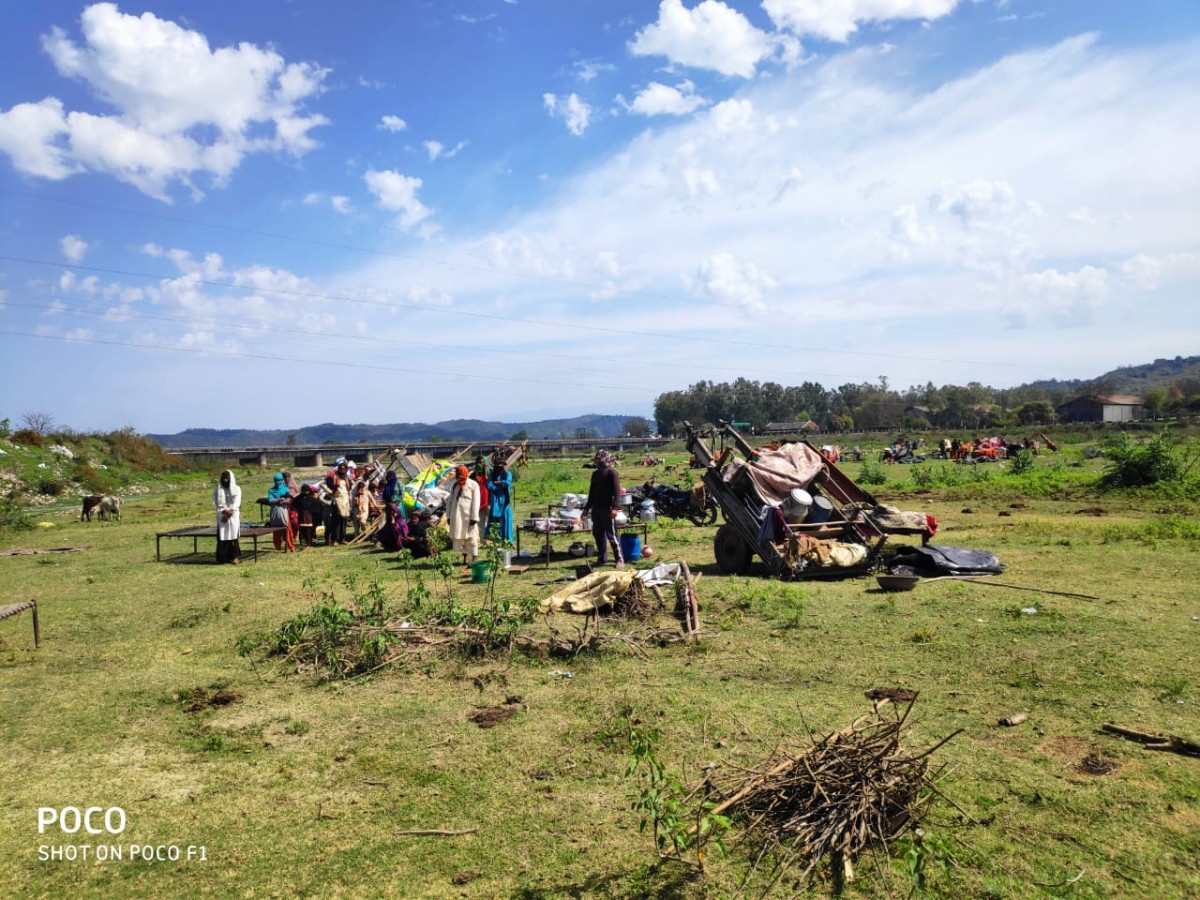 The families camping in the Swan riverbed. Photo: Prabhjit Singh

Saraj said that six calves had died of starvation in the absence of any fodder for the cattle. “We buried three yesterday, and three more bodies are lying in front of me now,” he said.

“I received such complaints yesterday also that these Gujjars are being harassed by some armed men in those villages of Talwara and Hajipur,” she said.

The DC further acknowledged that she was apprised of many poor families being stranded in the riverbed. “I have deputed the SDM (sub-divisional magistrate) of Mukerian to look into the matter and help all the hungry people in those areas,” she said.

Ration, she said, had been delivered to the group on Wednesday. But the larger problem remains for the Gujjars – their movement to sell the milk is not being allowed.

“We are not being allowed to move around to sell our milk, which is the lifeline of our survival,” Saraj said, confirming in the evening that five of the eight joint families had received the dry ration including wheat flour and sugar.

The Wire had on Tuesday reported that mobs had thrashed Muslim Gujjars on the Talwara-Mukerian road, while the police failed to register a such case or take any action against those who were identified. 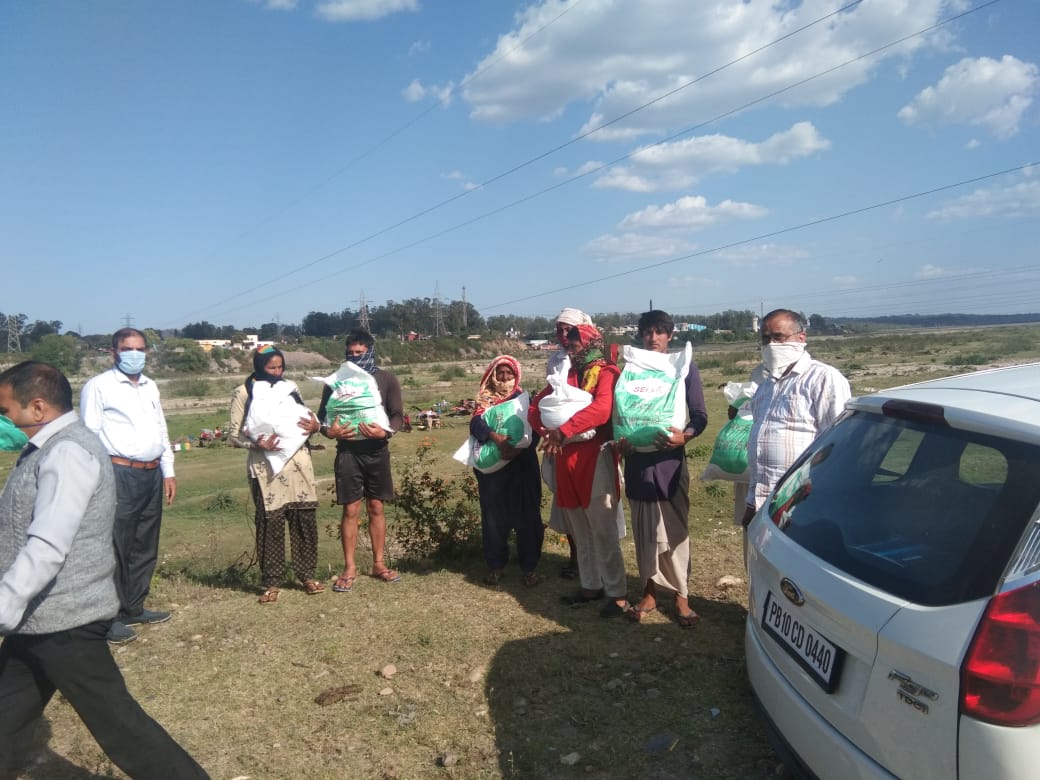 Ration being delivered to the families. Photo: Special arrangement

“No, we have not come across any such complaint,” said Hoshiarpur SSP Gaurav Garg, when asked why no case was registered either on spreading rumours or for the reported thrashing of Muslims.

“People were having apprehensions and did not allow the Gujjars to sell their milk,” the SSP said.

Garg also failed to respond when asked why no action against those who were stopping the milk sellers, as milk is also an essential commodity. The SSP’s assertions stood in contradiction to those of the deputy commissioner, who told The Wire that she had received complaints today and yesterday as well, and in turn asked the SSP for “strict action against the culprits”.

On Tuesday night, around 10 pm, loudspeakers in temples and gurdwaras of Naushera Shimli, Godda, Wazira, Saryana and Sibbo Chakk allegedly shared a message: “Muslims arriving from Tablighi Jamaat have reached in our area, and they want to spread the coronavirus. So the people are appealed to remain awake and switch on the lights and guard their houses.”

Dharminder Singh, a social activist from Naushera Shimli, said that the announcements were made in different villages and he could see several boys coming out on the streets, holding batons and sticks. “This atmosphere is prevailing for the past 2-3 days,” he said.

But today, Naushera Shimli sarpanch Darshan Singh repented. “It all began from Saryana village, where the village sarpanch Rajan Kumar was the first one to make such announcements,” Darshan Singh said.

Saryana sarpanch Rajan Kumar, when contacted, denied that the Muslim community and the Tablighi Jamaat men were ever mentioned in the announcement. Then what exactly was the announcement? He replied that three unidentified men were spotted in the dark and they fled on being challenged. “The announcement was only for the safety of the villagers who were asked to keep their lights on and remain alert to guard their houses,” he said.

With inputs from Deepak Thakur.