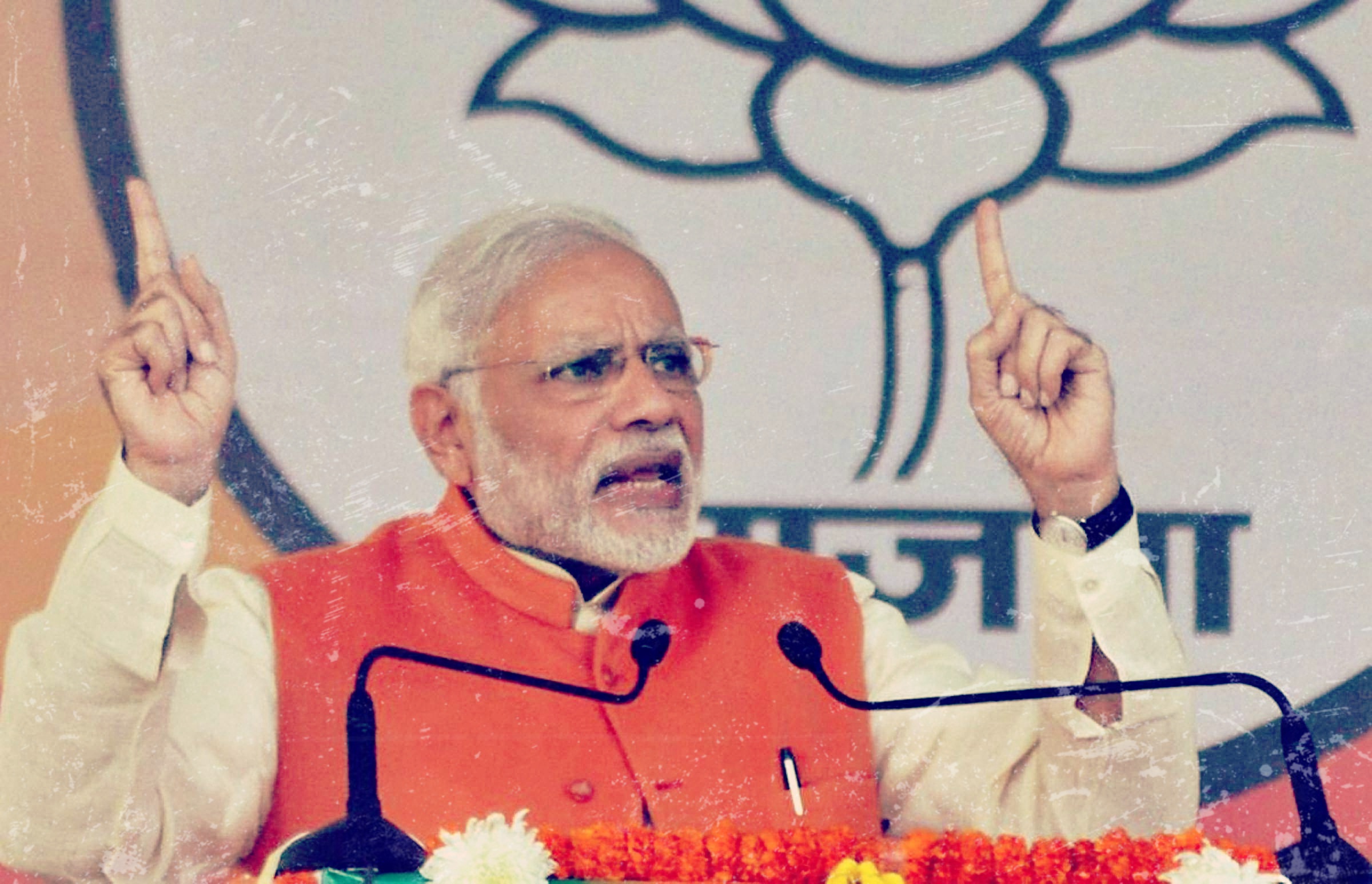 Fifteen years ago, almost to the date, for the first time, India witnessed an electoral campaign in which majoritarian pride and identity were harnessed by a political party and its principal leaders brazenly. Religion or the R-factor played a role in elections from the first general polls in 1952. Back then, even the Congress put up its Muslim stalwarts only from constituencies with a fair minority presence. For instance, Maulana Abul Kalam Azad was fielded from Rampur in Uttar Pradesh. Likewise in Delhi, where the Muslim population declined from 33% in 1941 to less than 6% in 1951 – it took a quarter of a century before any national party fielded a Muslim candidate in 1977 – Sikandar Bhakt of the Janata Party. Since 1985, no major party has nominated Muslims from any Lok Sabha seat from the capital.

In 1977, the Shahi Imam of Delhi’s Jama Masjid controversially ‘directed’ Muslims to vote en bloc against the Congress in retaliation to Indira Gandhi’s over-enthusiastic forced-sterilisation programme during Emergency. In 1983, Indira used communal tactics in Jammu and Kashmir assembly polls and enlisted the ‘Hindu’ Jammu region while the ‘Muslim’ Valley was swept by the National Conference. Yet, such tactics were subtle – even Rajiv Gandhi in 1984 talked about borders advancing to people’s doorsteps and framed the party’s slogans against the background of turbaned men.

But Narendra Modi’s first electoral campaign in 2002 changed all that: for the first time the leader of a party and its chief campaigner revelled in mounting a campaign inlaid with hate against Muslims. While the foreign hand had been previously mentioned by Indira, Modi campaigned that a direct link existed between Gujarati Muslims, Pervez (Mian) Musharraf, Pakistan and terrorists. It must be recalled that the election was held not just in the backdrop of the aftermath of the Godhra riots but also in the wake of 9/11, the heinous assaults on the state assembly in Srinagar and the attack on parliament. The 2002 Gujarat assembly election that is instrumental in the making of Modi, remains a decisive milestone in the pathway of communalising electoral campaigns in India. While earlier, leaders resorted to using symbolism – for instance visiting a temple, a mosque, a dargah or a gurudwara – all pretensions were dropped by Modi and he resorted to the use of direct language, at times derogatory.

State elections were due in Gujarat in the first quarter of 2003 but immediately after the riots, Modi initiated the process of maximising gains. The chief minister moved for early polls by recommending the dissolution of the assembly but the Election Commission (EC) did not play ball and declared that the situation in the state was not conducive to conducting polls. While central leaders of the BJP reacted to the development cautiously, Modi fired a verbal fusillade. The way he addressed the EC still echoes for its obvious intent: ‘James Michael Lyngdoh’, not once but four times. He was backed by a VHP leader who accused the EC of “being guided by another of his community – Sonia Gandhi!”

The election commissioner was referred to by his full name not just in public speeches that could be expected to be vitriolic, but also in each official communiqué the state government released. The blatant attempt to underline to people that the EC was acting against the state government’s recommendations because he was Christian however went unchallenged, as the model code of conduct had not come into effect because elections had not been announced.

Even though the lives of the people affected in the riots remained unsettled, Modi had chosen to continue his political campaign. His intention was clear: to aggregate voters around himself and his stance and ward off charges mounted by adversaries and the media. He called his campaign, that included processions and public meetings, Gaurav Yatra, underscoring that it was partial to its emotional quotient than its political bottom line.

With this campaign, Modi appointed himself the sole custodian of Gujarati pride and the defender of its ‘sectarian’ culture and ethos. Taking a cue from L.K. Advani’s Somnath to Ayodhya Rath Yatra, Modi started his journey in early September 2002 from another significant temple: the 200-year-old Bhathiji Maharaj Temple in Phagwel village, Kheda district.

At the rollout of the yatra, Modi delivered a speech that played a significant role in the building of his image as the Hindu hriday samrat. In the speech, he mocked Muslims and made several statements packed with vitriol. The points used were drawn from the Sangh Parivar’s arsenal of falsities – most importantly that Muslims ‘breed’ more rapidly and would soon overrun the Hindu population. “We want to firmly implement family planning,” began Modi before switching to the first person speaking as a Muslim: “hum paanch, humare pachees (we five, our 25),” and laughed derisively. He asked if family planning was not necessary in Gujarat, clearly implying that Muslims were opposed to this.

This was the same speech in which Modi referred to relief camps for riots victims as “baby producing factories” and made fun of Muslims as people who “fix punctures” in cycles. In the course of the campaign, Muslims were portrayed as unpatriotic and sympathetic to Pakistan and terrorists. In contrast, he claimed that he was attacked by Muslims and his opponent, including those who go “straight to Italy, plead with the EC to stop polls” because “we allocate funds for Becharaji… and if we bring Narmada waters in the month of Shravan, then too they say they dislike it. So what should we do? Do we go and run relief camps? … Open baby producing factories?”

The National Commission for Minorities (NCM) sought the text of the speech for its apparently inflammatory content but the state government declared that “the government has neither any tapes nor a transcript of the CM’s speech” and thus it could not provide the text to NCM. The declaration was made by Modi’s principal secretary, P.K. Mishra, now additional principal secretary in the prime minister’s office.

Many years after the speech, the Supreme Court appointed Special Investigation Team (SIT), asked a pointed question: “Did these remarks refer to the Muslims?”

In his reply, Modi did not own up to the intended meaning; “this speech does not refer to any particular community or religion. This was a political speech, in which I tried to point out the increasing population of India… My speech had been distorted by some elements…”. The SIT put no supplementary queries on what had been distorted and which part misinterpreted.

During the two months of election campaign that emerged out of the Gaurav Yatra, Modi transformed the electoral challenge into an ideological battle, a tactic he has used in every election after taking over the leadership of the BJP. He staked claim to being the upholder of Gujarat’s pride and identity (asmita) that adversaries were undermining. In his battle, Modi emphatically declared that his mission was nothing less than a crusade: “I sit here at this seat of strength, standing at the feet of mother Becharaji… I will not allow merchants of death who want to destroy Gujarat and harass the innocents to settle here”. Invoking the goddess in 2002 was akin to his “maa Ganga ne mujhe yahan bulaya hai,” assertion at Varanasi in 2014. Modi can be accused of everything but lack of consistency on clever mixing of images and motifs.

The capacity to equate himself with the nation and national identity too goes back to 2002. Attacks on him and his government was presented to people of the state as an attack on Gujarat and its (Hindu) people. He accused the opposition of depicting the state as one of rapists and murderers. All attacks on him for his handling of riots was presented as not just an attack on his government but on Gujarat and its people. Defending Modi and voting for him thus became a ‘sub-national’ duty of voters. He claimed that the Congress and other parties were portraying Gujaratis as violent people with knives in their hands and exhorted people to put paid to this campaign by using the sole weapon they had – the vote.

The Gaurav Yatra begun 15 years ago seamlessly nosedived into an election campaign. Though its basic purpose was to reap electoral dividend from the riots, the objective went beyond this. The yatra succeeded in forging ‘unity’ and ‘self-respect’ beyond the polls and was instrumental in Modi’s continuation in office being seen as symbol of people’s uniqueness and superiority.

In time, by a series of astute moves, Modi has succeeded in converting his project of sub-national pride into an overarching national scheme. Whatever the assessment of people in regard to achievements and shortcomings of the government, there is near unanimity that he as prime minister has enhanced Indian pride. The idea of the Gaurav Yatra has served as a basic template and examining the campaign deeper will continue providing more insights into Modi’s electoral and political strategy and lexicology.