Past Continuous: 1993 Bombay Blasts Were Part of a Continuum of Terror 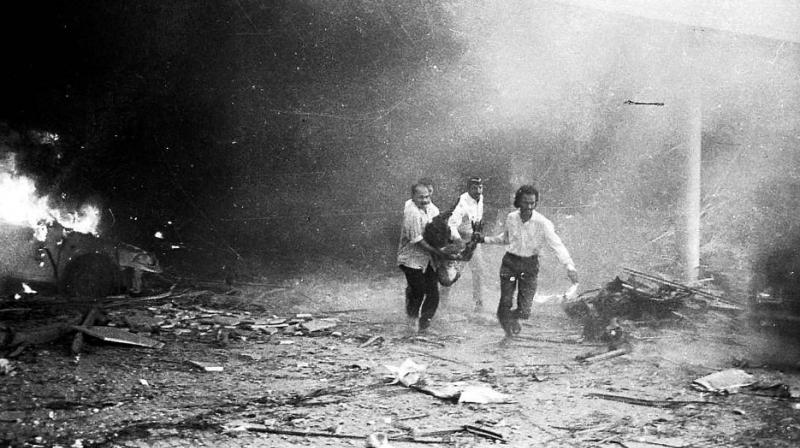 For a column reflecting on the relevance of India’s political past, and which took note of the passage of quarter of a century since the demolition of the Babri Masjid, one can be accused of political bias if an equally cataclysmic episode is glossed over purely because its ‘anniversary’ fell in between two columns.

From the perspective of today’s dominant political school of thought, which reduces every issue to black-and-white binaries, ignoring or not writing about the serial blasts in Bombay on March 12, 1993, would be another instance of ‘sickularists’ – alias ‘anti-nationals’ – bypassing the ‘misdoing’ of the ‘other’ while presenting the ‘symbol upsurge’ of nationalistic sentiment – as Atal Bihari Vajpayee described the Ram temple agitation – negatively.

Referred to as ‘Black Friday’ – Anurag Kashyap’s film on the horrific episode, which almost did not make it to the screens, has the same title – the serial blasts were India’s first instance of urban terrorism executed on a scale that caused mammoth destruction.

Coordinated attacks on this day were the second incidence of mass casualty involving India, and the first on Indian soil – the 1985 blowing up of Air India’s Kanishka over the Irish Coast being the first. This was also the second instance of co-ordinated serial blasts – the first being New Delhi’s June 1985 transistor bombings, the scale of destruction of which was minuscule compared to what happened in Bombay.

Yet the Delhi blasts were nonetheless trailblazers in gore. Subsequent to March 12, 1993, every act of urban terrorism and mass violence has a benchmark. Moreover, the Bombay blasts can be distinguished from attacks that followed for a fundamental reason: the March 1993 one remains the ’cause’ or ‘trigger’ for other incidents that followed over the past 25 years.

The Bombay blasts cannot be viewed in isolation; they must be seen as part of a sequence of events beginning with the demolition of the Babri Masjid on December 6, 1992. The deliberate public destruction of a disputed historical structure was followed by riots in various parts of the country.

However, the scale of violence in Bombay was wider, and its intensity greater. Violence raged in the megapolis for five days from December 6-10. Thereafter, dark days returned to the city for a fortnight from January 6-20, 1993. The city during these two phases was rocked by riots of unprecedented ferocity. The brunt was faced by the Muslims of the city in January due to the controversial maha artis organised by the Shiv Sena with the intention of mobilising Hindus.

There was little doubt that assembled crowds were being incited to resort to violence against Muslims, yet these events were treated by the officials and leaders as a religious activity – as a counter to Friday namaaz – and given complete liberty by the state government.

Although everyone knew these rituals were organised with a political objective, officials and leaders in government opted to live in denial. Consequently, anger mounted among the Muslims in the city, especially among those who lived in its underbelly. When opportunity came in the form of inducements, several Muslims were more than willing to become associates or partners in ‘retaliatory’ action.

Yet, the Bombay blasts were not purely an act of retribution for most of those who ‘worked’ on the ‘project’. There is little doubt that for Dawood Ibrahim and his gang, the ‘proposal’ and ISI involvement in it, provided an ‘opportunity’ to make forward movement when their empire in India was under threat. It must also be noted that many of the accused, officials and other facilitators, were not Muslims.

Mass violence engenders a pattern of responses. Take the 1984 anti-Sikh pogrom, for instance – a tragic episode with which I was personally involved as a volunteer and on which I have written extensively. Mass brutality against Sikhs in the Indian capital and several other cities of north India resulted in an upsurge of sympathy among other sections of the society, and was expressed in the form of ‘peace committees’, ‘night vigils’ and participation in relief efforts.

Because of the insecurity faced by Sikhs in the immediate aftermath of the targeted violence, more efforts were mounted by civil society groups instead of community organisations, even in gurudwaras where many of the affected took shelter.

After the initial period, the better off, or those whose houses were located in more ‘secure’ areas, could return and begin putting their lives in order. However, in areas where social relations with neighbours were permanently damaged, as in most resettlement colonies and other lower-middle-class localities, residential alternatives had to be provided. Over time, civil society engagement with the affected Sikhs dwindled and only ‘professionals’ remained in touch.

Currently, the main thrust of the discourse on the 1984 carnage is restricted to ‘justice’ and trial of the ‘guilty’. Little is said about the personal trauma and scars they have left on not just ‘survivors’ but also on the next generation of Sikhs who have grown with memories of an idyllic life that is now no more.

At a societal level too, there is little mention of the schism that continues to exist between Sikhs and other communities, and how this hinders their participation in public life in various way. Nothing is said about the residual suspicion remaining among sections of non-Sikhs against members of the community.

Likewise, discussions on the Bombay blasts are mainly restricted to cases, judgments and punishments for the accused. Little conversation follows the theme of permanent disruptions in relations between Muslims and non-Muslims, how they have changed as people grappled with identity issues while coping with having to cope with being called upon to display their loyalty to the country.

Conversations on the Bombay blasts also crop up in the context of the ongoing dispute with Pakistan over the extradition of Ibrahim and his associates, named as perpetrators of these blasts. There is little exploration of how events in Bombay after the Babri Masjid’s destruction shaped not just inter-community relations but also paved the way for the emergence of home grown terror.

In terms of intensity, the anti-Muslim violence in Bombay in 1992-93 somewhat matches the scale of the 2002 riots in Gujarat.

Yet, in majoritarian argument, the anti-Muslim violence in Gujarat – terrorism by mobs – is justified because the protracted episode was in ‘retaliation’ to the Godhra carnage. But, when the 1993 blasts Bombay are discussed, a similar ’cause and effect’ is not drawn between terrorism by bombs and the targeted attacks on Muslims in January 1993.

Likewise, when instances of violence triggered by a section of Muslims in December 1992 is flagged, it is not mentioned these were an outcome of protests against demolition of the Ayodhya shrine by mobs mobilised by the Vishwa Hindu Parishad and other members of the Sangh parivar.

In Bombay, while succour was provided by philanthropic and rich Muslims, there was no institutional backing because organisations like the Jamaat-e-Islami had been banned at that time. Despite this, once the situation in Bombay returned to normal, Muslims went back to living the way they did previously. In the immediate aftermath, many turned to religion and reinforced their social and physical identities as a sign of rebellion, but few had any time or inclination for ‘jihadi‘ ideas.

At that time, there was no pan-Indian Muslim identity and the anxiety and anguish of Muslims in Kashmir was not shared by co-religionists in other parts of the country. But the destruction of the Babri Masjid and the manner in which a section of Hindus rejoiced nationally ended up knitting together a Muslim consciousness through the country. Growing majoritarianism and the strengthening of the BJP and its affiliates also contributed to the increase in ghettoisation and increased participation in militant activity and the widening of pan-Islamist sentiment.

Although Pakistan’s Inter-Services Intelligence facilitated the Bombay blasts, an opening was provided by the poor response of the Indian state and its political leadership to the sense of betrayal and hurt that the demolition of the Babri Masjid generated.

In the years since, the problem of homegrown terror has more become acute as the sense of alienation has not been addressed. In the past 25 years, the average member of the community has become more aware of what it means to be a Muslim in India. In Indian politics, Muslims were initially accorded an exalted position as political actions were guided by the sense that Muslims who chose to stay within a secular country and not with their co-religionists in Pakistan needed to be assured their decision was prudent.

With the rise of majoritarianism, this time with state patronage, there are more frequent “go to Pakistan” calls. One way of ‘responding’ to this changed attitude towards them was shown in 1993 by a handful of disillusioned Muslim youths whose grievance was given a violent thrust by elements in the underworld for whom the executing the blasts was just another ‘business’.

It has been a quarter of a century since India has remained trapped in a continuing match of untiring boxers who never get drained out and continue fighting, although the arena has been collaterally damaged. Homegrown terrorism poses serious challenge and foreign forces cannot be accused of every act that seeks to destabilise India. The Bombay blasts were the explosive product of a continuum of provocation, alienation, state complicity and terror that began before 1993 and whose effects are still evident around us.