Paresh Rawal's tweet against Arundhati Roy amounts to incitement of violence, which violates the oath he took as a legislator. 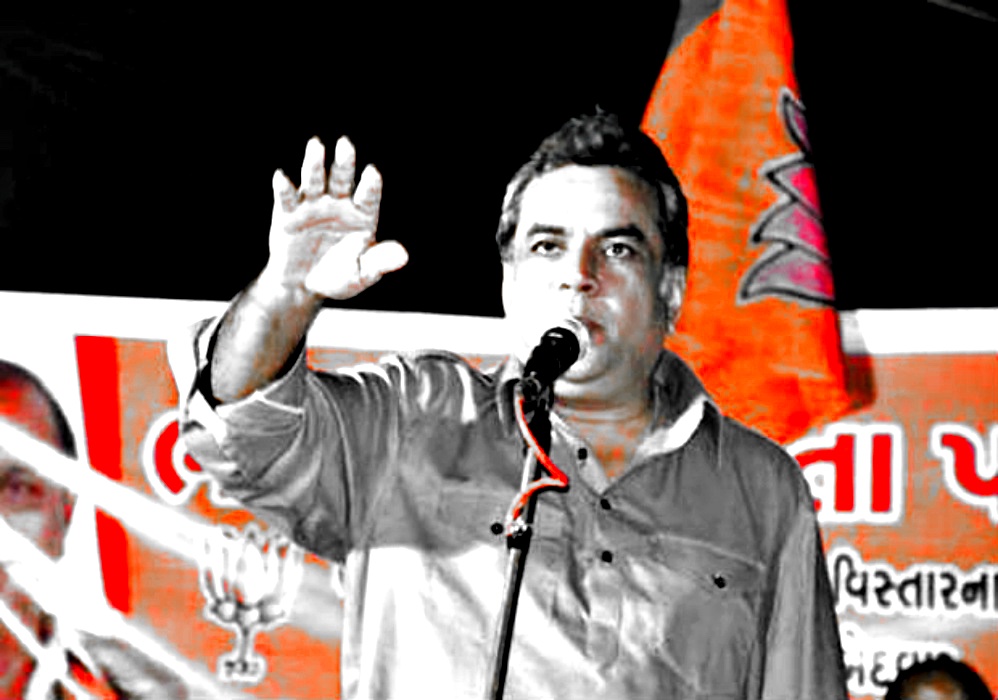 Paresh Rawal’s recent tweet about using Arundhati Roy as a human shield has received a lot of flak. Credit: PTI/Files

When actor and BJP MP Paresh Rawal recently tweeted that Arundhati Roy and others be tied to an army jeep, he was making a laudatory reference to the degrading and inhuman treatment meted out to a citizen, Farooq Ahmed Dar – who was tied to a jeep by army Major Leetul Gogoi as a human shield against stone pelters during the recent elections in Kashmir. Astonishingly, Gogoi has received a commendation card from the army for this act. Rawal’s statement is particularly serious as it is not restricted to the specific action, but is an incitement to further violence of that nature against civilians at large. With each passing day, we see the escalation of violence at every level against persons belonging to marginalised social groups. In recent times this has been particularly visible in the orchestrated attacks against Muslims by ‘cow protection’  vigilantes.

This incitement to deploy degrading and inhuman treatment and brutal violence against a writer – incitement that is tacitly supported by the ruling party – has the immediate danger of escalating the gruesome violence that we are already a witnesses to. This is violence being propagated on social media by an MP of the ruling BJP.

The Indian constitution binds us to democratic political traditions based on a respect for universal values, especially concerning life, liberty and dignity and importantly dissenting political views. These are non-negotiable. The right to dissent is at the core of Article 19 and is guaranteed to all citizens under the constitution. Incitement to violence and propagation of such violence against people who dissent – an incitement that has the clear and proven danger of escalating violence indiscriminately on the ground, against dissenters and all those who do not subscribe to narrowly prescribed Hindutva diktats – is a grave derogation of both Article 19 guarantees and the guarantee to life and personal liberty under Article 21. At a time when ordinary citizens who approach courts for ordinary reliefs are told that ignorance of the law is not an excuse, what do the honourable courts say about this incitement to violence which in fact constitutes perjury of the constitutional oath taken by the legislator?

Under the third schedule of the constitution, the oath Rawal took as Member of Parliament for Ahmedabad (East) would have read:

“I, Paresh Rawal, having been elected a member of the house of the people, do swear in the name of God/solemnly affirm that I will bear true faith and allegiance to the constitution of India as by law established and that I will uphold the sovereignty and integrity of India.” [emphasis added]

What should be done when sitting members of parliament incite or propagate violence in direct violation of the law and in derogation of their constitutional oath of office? What are the measures, we as citizens may take to restrain gross misdemeanour on the part of legislators? At several points in our post-independence history, courts have stepped in to craft a stunningly innovative jurisprudence of constitutionalism. Perhaps, yet again, the time has come for them to do so.

The law governing elections and conduct of candidates running for election is set out in the Representation of People Act, 1951. Grounds for disqualification of elected members are prescribed in Article 191 of the constitution, but the courts have held that this article is not exhaustive – allowing for the inclusion of hitherto unanticipated grounds. Public misdemeanour, incitement to violence, wilful disregard of the law and international standards in public conduct, insofar as they signal an assault on the fundamental right to life with dignity and personal liberty, and insofar as they signal the incitement to commit a crime under international humanitarian law, certainly fall within the most minimal framework of accountability under the constitution.

“The oath of office insisted upon under the constitution is the prescription of a fundamental code of conduct in the discharge of the duties of these high offices. The oath binds the person throughout his tenure in that office, and he extricates himself from the bonds of the oath only when he frees himself from the office he holds. Breach of this fundamental conduct of good behaviour may result in the deprivation of the very office he holds.”

A remedy is implicit in every fundamental right. The remedy implicit in the right to vote is the right of recall, which is not restricted to mere disqualification, but extends importantly to forfeiture of office for failure to satisfy the grounds of continuance.

Following K.G. Kannabiran’s insistence a decade ago on opening out this possibility in another context, it is perhaps time to invoke the ancient English writ of scire facias, which was replaced by quo warranto – a writ which prescribed a proceeding for the forfeiture of office on grounds of misbehaviour, the assumption being that office may only be held “during good behaviour.” According to Raoul Berger, “[w]hen the framers employed ‘good behaviour,’ a common law term of ascertainable meaning, with no indication that they were employing it in a new and different sense, it might be presumed that they implicitly adopted the judicial enforcement machinery that traditionally went with it”.

Constitutional morality may guide us along unanticipated paths, if only we are willing to discard the scaffolding that restrains us and open institutions of justice out to the meaning and essence of the constitution. This is now indispensable to our collective survival and our collective claim to dignity and full citizenship.

Every utterance or action like Rawal’s diminishes each of us by the day – it utterly strips the perpetrators and their cohorts of any claim to the right to political office occupied increasingly only through coercion, lawlessness and radical evil. One day soon enough, the little child in the crowd will cry, “but the emperor has no clothes on!” Impunity is never a permanent guarantee and has never been in history. I am of course extremely concerned about the slow death we are dying by being helpless bystanders bearing mute witness to this mayhem, which has the imprint of the state.

The use of human shields (whether prisoners of war, protected civilians or civilians in general) is a crime under international humanitarian law prohibited in international and non-international contexts. Yet, as citizens of the ‘world’s largest democracy’ – whose philosophies of non-violence, as Upendra Baxi has argued, have become peremptory norms of international law – we are confronted with a situation where the army publicly uses a human shield in Kashmir; and an elected legislator of the ruling BJP tweets his endorsement. Both in gross and brazen violation of accepted standards and protocols on the treatment of persons in conflict zones in international and internal contexts.

Today, the repeated utterances of elected representatives of the ruling party with impunity make the exercise of our right to full and informed citizenship with dignity even more urgent. At a more immediate level, there must be an urgent initiation of criminal proceedings against Rawal for his utterances and for forfeiture of his seat. The larger question of collective responsibility for this brazen disregard of the constitution by a person in constitutional office, and the violation of standards set out in international humanitarian law in the case of Dar in Kashmir, remains to be addressed.

Kalpana Kannabiran is professor and director at the Council for Social Development, Hyderabad.