Pakistan Temple Attack was 8th Such Incident in 18 Months; All Minorities Tense

As attacks on Hindus, Christians, Ahmadis, Hazaras and Shias increase, non-Muslims and non-Sunni Muslims do not feel safe.

The temple attack in Pakistan. Photos: Screenshots from video

Karachi: Even though the Supreme Court of Pakistan has taken suo motu cognisance of the attack on a Hindu temple in Bhong, Punjab, and pulled up the local police for failing to prevent the attack, the Hindu community of the country remains nervous and tense.

The Ganesh temple in the village of Bhong in Punjab’s Rahim Yar Khan district had been severely damaged on August 4 when a mob of about 250 people attacked it after a minor Hindu boy accused of desecrating a local madrassa was released on bail. Not only was the temple vandalised, but most of the Hindu families in the village were forced to leave their homes.

The attack on the temple in Bhong was the latest in a series of attacks on minorities that has been taking place over the last 18 months at least. According to Afrasiab Khattak, a well-known columnist and former senator, the Bhong incident reflects the deepening religious extremism and intolerance in Pakistan which is aided by the state narrative and policy.

“Those who are of the belief that this was an attack only on Hindus should not forget that the flame of extremism will [eventually] engulf everyone [else] as well,” said Ravi Dawani, secretary of the Pakistan Hindu Panchayat.

The incident at Bhong

On July 4, 2021, an eight-year-old Hindu boy unwittingly entered a madrassa that was attached to a mosque and was caught by the maulvi, Hafiz Mohammad Ibrahim. Frightened, the boy allegedly urinated on the spot. Although the boy’s father apologised to the Muslim community and claimed that the eight-year-old was mentally challenged, the maulvi went to the police station the next day and registered a first information report (FIR) against the child. Since the boy is a minor, this was a human rights violation.  It is unclear whether the child was arrested or not.

On July 28, the local court granted the boy bail since he is a minor. Following this, a number of people, including one Abdul Razzaq Soomro, posted anti-Hindu comments on social media over the next few days that resulted in the formation of a mob on the highway on August 4 that then went on to vandalise the Ganesh temple and force Hindus out of their homes.

In a video that went viral on social media, the mob was seen attacking the temple and damaging it severely. It was only at that point, apparently, that the local authorities realised a communal incident was taking place in Bhong and took action.

According to Lal Chand Malhi, a member of the Pakistan Tehreek-e-Insaaf and parliamentary secretary for human rights in the National Assembly, the police could have averted the situation at Bhong by breaking up the mob as it chanted slogans against Hindus on the highway.

On August 6, while taking cognisance of the incident, the Supreme Court of Pakistan lambasted the police both for lodging an FIR against a minor child and for not acting against the mob while it was still on the highway.

However, despite the actions of the Supreme Court, the Hindu community remains fraught. So far, no minister from the Punjab government has visited Bhong since the incident and even the top leaders of the Milli Yakjehti Council, an alliance of 22 religious and political parties and organisations, have not condemned the vandalisation of the temple.

Over the last 18 months or so, minorities in Pakistan including Hindus, Christians, Ahmadis, Hazaras and Shias have been subject to attacks. At the same time, more cases of forced conversions have been reported and non-Muslims and non-Sunni Muslims do not feel safe. 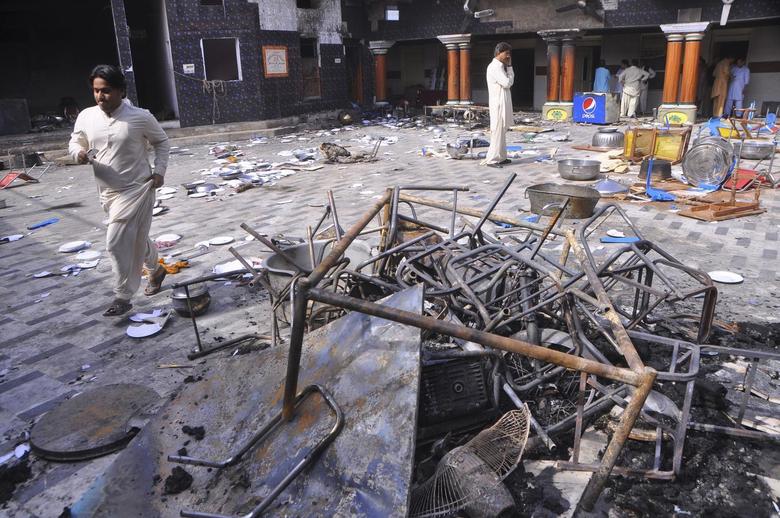 Members of the Hindu community walk inside a temple that was attacked on Saturday night, in Larkana, southern Pakistan’s Sindh province, March 16, 2014. Photo: Reuters/Faheem Soormro/Files

As an example, Malhi pointed to an incident that had taken place in Tharparkar, Sindh, on July 26, 2021, in which one Abdul Salam Abu Dawood who worked at the Thar Coal Project forced a Hindu boy to chant Allah hu Akbar (God is Great) and abuse Hindu deities.

“Our community did not react violently; we are a peaceful community,” Malhi said. “Dawood was arrested and apologised for his actions. But the Hindus are fearful about the issue of the minor boy in Bhong. Who knows what actually happened?”

According to the official government report on the Bhong temple incident, the same mob that had vandalised the Ganesh temple had damaged the Shia Imambargah too. “This aggravated the sentiments of the Shia community as well,” said the report.

Only two of these attacks made national news: the one on the Teri Temple in Karak and the Bhong incident. No one knows anything about the other six incidents, even whether the culprits were punished or not.

However, even when the Supreme Court takes cognisance of such attacks, the culprits tend to walk free, as happened in the case of the incident in Karak.

Also read: Pakistan Still Wants to Have Its Jihadist Cake and Eat it Too

According to Kheal Das Kohistan, a member of National Assembly from the Pakistan Muslim League (Nawaz), a jirga (traditional meeting) was held at the Governor’s House in Khyber Pakhtunkhwa and all the culprits involved in the attack on Teri Temple were forgiven.

“Was this justice?” asked Kheal Das. “If we do not get justice, we will keep protesting the attacks on temples.”

In Bhong, even though the Supreme Court has ordered the arrest of the culprits and asked the police for a status report on August 13, the local authorities refuse to share the details of any arrests made so far.

“No one understands the mental torture felt by the Hindus who were forced to leave their homes and now must begin their lives all over again in the same area,” Malhi told The Wire. “You can rebuild the temple, but you can’t make the fear among the Hindu community disappear.”