Certain Hindu groups have contended that the Shahi Idgah mosque in Mathura stands on the purported birthplace of Hindu deity Krishna; others in the past have also sought the demolition of the mosque. 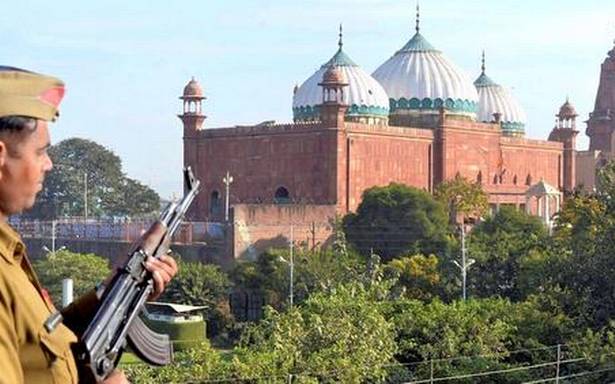 New Delhi: A petition was filed with a court in Uttar Pradesh’s Mathura on May 13 seeking a videographic survey of the Shahi Idgah mosque in the region, inviting comparison with the ongoing Gyanvapi mosque issue which is centred around a similar video survey.

Mathura’s Shahi Idgah mosque is located next to the Krishna Janmabhoomi, believed to be the birthplace of Hindu deity Krishna.

Mathura, Ayodhya and Kashi (Varanasi) form the trio of sites that Hindutva activists often vow to “free” through the destruction of Islamic structures. Variations of the slogan, “Ayodhya-Babri sirf jhaanki hai, Kashi-Mathura ab baaqi hai” have accompanied rightwing agitations since the 1980s.

The Financial Express reported that, in the aforementioned petition, a video survey has been sought in order to ascertain whether or not there are “Hindu artefacts” and “ancient religious inscriptions” located within the mosque premises.

In the Gyanvapi case, too, the petitioners had sought for a survey to find out whether there were idols of Hindu deities and had sought year-round access to the mosque, which they contended housed a Hindu shrine within.

On May 12, a day prior to the present petition being filed, the Lucknow bench of the Allahabad high court had directed the Mathura court in question to dispose of all cases pertaining to the Krishna Janmabhoomi-Shahi Idgah dispute with a period of four months, according to news agency ANI.

The high court’s order came on a plea by one Manish Yadav, president of the Narayani Sena, a group of Krishna devotees, which sought for the early disposal of its case related to the dispute pending before the Mathura court.

The high court also said that the parties to these cases, such as the Uttar Pradesh Sunni Waqf Board and others, are required to appear before the court and participate in the hearing. If they are not and if they attempt to stall the hearings, the high court said that the Mathura court could issue ex-parte orders.

Cases before the Mathura court

The plea for a survey to be conducted inside the Shahi Idgah mosque joins the Narayani Sena’s and eight other pleas regarding the aforementioned religious dispute.

One such case was filed on behalf of child deity Bhagwan Shrikrishna Virajman, through the “next friend” Ranjana Agnihotri and seven others. “Next friend” is a legal term for a person who represents someone directly unable to maintain a suit.

The plea contended that Mughal emperor Aurangzeb had destroyed the Krishna “janmabhoomi” on the site and had erected the Shahi Idgah mosque in its stead. Moreover, it had cited the official website of the district of Mathura as the source of its claims.

“The city was sacked and many of its temples destroyed by Mahmud of Ghazni in 1018 CE and again by Sikandar Lodhi, who ruled the Sultanate of Delhi from 1489 to 1517 CE. Sikander Lodhi earned the epithet of ‘Butt Shikan’, the ‘Destroyer of Hindu deities’. The Mughal Emperor Aurangzeb, built the Shahi-Eidgah Mosque during his rule, which is adjacent to Shri Krishna Janmabhoomi believed to be over a Hindu temple.”

Agnihotri’s plea contended that the Shahi Idgah mosque had been constructed on land within the area of the Katra Keshav Dev temple.

The petition had named the Uttar Pradesh Sunni Central Waqf Board; Shahi Masjid Idgah Trust; Shri Krishna Janmabhoomi Trust; and Shri Krishna Janmasthan Seva Sansthan as defendants and had sought prohibitory injunctions restraining the defendants, their workers, supporters, men, attorneys and every person acting under them from entering the premises.

The petition had also cited the Places of Worship Act, which is currently being widely discussed in the context of the Gyanvapi mosque dispute.

The Gyanvapi mosque authorities and several commentators have called the videographic survey of the site, ordered by a Varanasi court, violative of the provisions of the Places of Worship Act.

Agnihotri’s plea sought for various provisions of the Act to be declared unconstitutional.

The Mathura court is expected to pronounce its decision on May 19.