Communal tensions are still high in the area that witnessed riots this February, the 'bhoomi pujan' has added to the fear and Muslim residents says the police has threatened them rather than been helpful.

New Delhi: It’s been a tense five months in North East Delhi. Residents are still trying to cope with the damage caused by the communal riots in February. Fifty-three people were killed, more than two-thirds of whom were Muslim. Given their behaviour during the violence and the manner in which they have conducted investigations since, there is little trust in the police, locally.

The media hype ensured that the event led to celebrations in different parts of the country, as Sangh parivar activists and, in some places, ordinary Hindus lit diyas and burst crackers. A section of Hindus living in north-east Delhi’s Ghonda – an area with a mixed population of both Hindus and Muslims – also did the same, with many Hindu houses hoisting a saffron flag to celebrate the construction of a temple where the Babri Masjid once stood.

But once the day was over and night fell, saffron flags also cropped up at the entrances of the lane which has a mosque. Along with the flag, lane number 2 in Subhash Mohalla also witnessed “indecent” and “communally-charged” sloganeering, according to residents of the area. The lane, which was open before the Delhi riots in February, now has metal gates on either side for security. At least one person from Subhash Mohalla was killed during the riots, and several were injured.

“I was going to sleep when I heard some noise outside the house,” Anam*, a middle-aged homemaker who lives in lane number 2, told The Wire. When she went to her balcony, a cramped space which has been converted into storage for useless, broken items, she heard slogans being raised. “At around 1 am, a group of men were standing in our lane and shouting ‘Jai Shree Ram‘, ‘Mullon, bahar niklo (Mullahs – a derogatory word for Muslims – come out)’, ‘Desh ke gaddaron (Traitors of the nation)’.”

That’s when she woke up her husband, Shahid*. “My husband was already scared of the violence; he had a narrow escape during Delhi riots. So he suggested that we should close our doors and go to sleep quietly. ‘Awaaz uthane ka koi faida nahin (There is no point raising our voice now),’ [Shahid said].”

Days later, Anam realised that what her husband said that night was, after all, true. This realisation came when she heard about an incident in north-east Delhi’s Bhajanpura police station on Saturday night.

‘They refused to register an FIR, beat us instead’

After deliberating with locals in the area about the incident, about seven women from Subhash Mohalla came together and decided to file a complaint on Saturday night. Among them were Shanno and her 17-year-old daughter. Shanno lives in lane number 1 of Subhash Mohalla with her husband, five daughters, two sons, two daughters-in-law and four grandsons. They have been living here for the past 32 years.

Shanno began to cry and she told The Wire about the incident on Sunday. She pointed at both her cheeks, alleging that she was slapped multiple times that night by policemen at Bhajanpura police station when she went to file an FIR. She also points to her left ear, which has been injured. “I don’t feel well. Those police officers beat us a lot,” she said. She alleged that male police officers mistreated the women, including her 17-year-old daughter. “Chaante-chaante barsaaye hum pe. Chhaati pe haath maar ke meri kameez phaadh di (They slapped me repeatedly. They put their hands on my chest and tore my kurta).”

Bringing up the saffron flags being put up in “Muslim” lanes, she says that communal tensions have built up in the area again. “Today, they have tied saffron flags near the mosque and burst crackers outside its gates, tomorrow they will do it inside the mosque if they go unpunished,” said Shanno.

A ‘conspiracy’ to force withdrawal of riot cases?

The irony of Shanno’s fate is that the Delhi high court had actually directed the police to ensure her safety.

On July 17, the high court directed the DCP of North East Delhi to protect Shanno and her family from any external threat. The order read, “This court considers it apposite to direct the petitioner (Shanno) to appear before respondent no. 3 (DCP, northeast Delhi) on 18.07.2020 at 10.30 am. The respondent no. 3 shall evaluate the threat perception and provide such security to the petitioner and her family as he considers warranted.”

A team of policemen was deployed for the family’s security and CCTV cameras were installed to keep an eye on any odd activity near Shanno’s house. The CCTV camera footage from the night of August 5, seen by The Wire, shows two young men tying a saffron flag on the gate of lane number 1.

Shanno and her husband Saleem are both eyewitnesses in cases pertaining to the Delhi riots, and recorded several videos on their phone of the violence. About two months after the riots, on April 18, Shanno lodged a complaint at Bhajanpura police station identifying several people from her own neighbourhood who had participated in the violence. The videos show people looting and burning shops, assaulting Muslims, pelting stones and making local bombs. She named several people including Chander, Daya Ram, Pappu, Bablu Goswami and others in her complaint. 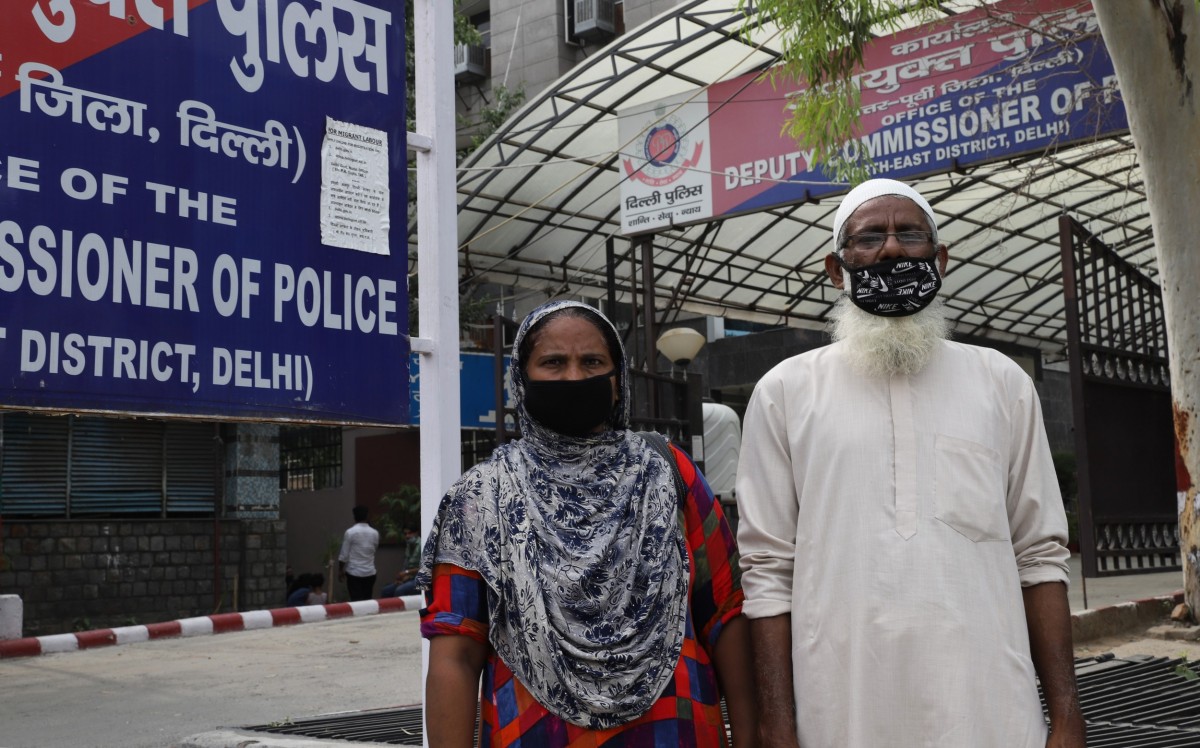 Shanno after meeting the DCP, following the high court orders for protection to her family. Photo: Prabhjit Singh/Files

“We have been getting threats ever since we filed the complaint to withdraw it. I had made many videos in which rioters can be clearly seen committing acts of violence,” Shanno said. She especially recalls June 12, when her husband’s phone, on which the videos were shot, was stolen from him at gunpoint.

Saleem, Shanno’s husband, works in a shop that deals with old spare parts for vehicles. He and his elder son, who drives an e-rickshaw nearby, are the breadwinners for a family of 15. Saleem is undergoing treatment for heart disease.

Talking about how his phone was stolen, Saleem said, “I was going to Meena Bazar to buy some things for a wedding on June 12 on my scooter. When I was about to reach ISBT, I was suddenly stopped by a motorcycle. There were two people on it. One of them took out a pistol and touched it to my stomach and the other one asked me to take out my phone, the one which had videos of the riots, and give it to them. I lost my phone and some Rs 6,000 kept inside the phone cover. They also warned me and told me to keep my wife in check. ‘Bina wajah maare jaoge (You will be killed for no reason),’ they told me.”

On June 13, Saleem’s younger son and two grandsons met with an accident at around 11 pm, while coming back home. “It is not mere doubt, I know for sure that my son’s vehicle was targeted,” Saleem said. All three were injured and the youngest among them, Saleem’s grandson, was injured so badly that the doctors initially thought he might not make it. The three were first admitted to Holy Family Hospital near Okhla and then taken to AIIMS for further treatment.

“We are very scared, we cannot explain. We have to think twice before going out of the house, the entire family is under risk,” Saleem said.

On Sunday, Shanno went to Mohan Nursing Home and Hospital to get her ears checked.

‘Putting up saffron flags is not a crime’: SHO Bhajanpura

Ashok Sharma, who has recently taken over the post of station house officer (SHO), Bhajanpura said, “They had been given security from the high court, we have been following up on that. On August 5, the day of the bhoomi pujan, some people put up saffron flags in their lanes. Hindus and Muslims both live in this locality. They also burst crackers. Now they are asking us to take action against those people. This was a non-issue. When everybody in the nation is celebrating, lighting diyas and bursting crackers, what’s the issue?”

“It would have been a problem had it been done at their doorstep,” Sharma continued. “However, doing it in the lane is not a crime. Still, we asked them to file a complaint with us and they had come last night for the same at around 9 pm. Now, they started demanding an FIR and refused to leave the police station without it. I told them, this is not how an FIR is filed, we will conduct an investigation soon. Lighting diyas and putting up saffron flags is not a crime, is it?”

He also denied allegations of the station’s policemen mistreating the women.

Also read: Delhi Riots: Police Arrest 5 Based on One Confession, Register 4 Identical FIRs on One Incident

When The Wire reminded the SHO of the communally sensitive environment in north-east Delhi after the riots, he said, “That I agree with. But what is the point of seven-eight women coming to the police station at 11 pm? They are the ones instigating locals. I told Shannoji that the environment of the area will get spoiled because of this, you don’t have to fight elections, do you? Then why bring a group of women and push for an FIR?”

The SHO said that he is trying to solve the matter amicably between locals. “If there is an internal issue, we should sit with them and try to solve it then and there. We have to take care of all religions. On top of it, there is the coronavirus and all our attention is on it, 2020 is very sensitive for us. The police station is for all. We are taking care of the area [North East Delhi] but they should not create an issue out of every little thing, they should also not instigate others.”