Militant Hinduism and the Reincarnation of Hanuman

Hanuman 2.0 is not benign. The smile on his face has been replaced with strong frown lines. He radiates mean energy against a black and saffron background.

Last Sunday, I was stuck in traffic on my way to Noida’s Sector 18. Craning my neck, I saw a sea of saffron ahead of me – men in saffron kurtas and turbans, on motorbikes, carrying swords, tridents and knives. They chanted ‘Jai Shri Ram’, ‘Jai Hanuman’ and ‘Hindustan Humara Hai’.

My taxi driver, a young man named Mustafa, said it was a procession by the Bajrang Dal to celebrate Hanuman Jayanti.

“But Hanuman Jayanti was yesterday?” I asked. Today was Easter.

“It doesn’t matter. They can do what they want, whenever they want. Look at those police officers,” he said. “They are standing there laughing with them. They are providing them security, not us.”

I look out of the window and spy a lone police officer laughing and chatting with a Bajrang Dal activist, leaning against a coach.

As I tried to take a video, another car inched towards us. It had two men leaning out of its windows and one on the roof, brandishing a sword. As he saw me handling my phone, he swiped at the window of my taxi. I had never seen a sword from such close quarters. The sudden gleaming steel surprised me and my phone dropped from my hand. I was glad I had not rolled down the window. I also suddenly realised that these were some very aggressive-looking young men with weapons bared and save the lone policeman, not a police escort in sight.

Mustafa asked if we could turn the cab around and if I could please let him go. I agreed. We turned back.

The population of Noida, in western Uttar Pradesh, a satellite town of the Indian capital, is a mix of economic migrants of all classes and local farmers, who now play in millions and billions after selling off their farmland to the government or to private developers. The Rashtriya Swayamsevak Sangh (RSS) has been conducting its experimental indoctrination project here for years now.

After 2014, however, the saffronisation of Noida has been more in your face. They can be seen in the Hindu flags that flew high in balconies of various apartment complexes ahead of the ‘Hindu New Year’ that fell on March 21, and which the RSS celebrated with great fanfare this year to unite Hindus. The group asked all Hindus to hoist flags with the “Om” symbol in their houses and to light diyas on the day. Traditionally, the Hindu new year falls on different days for different states and nationally is celebrated on Diwali, a festival with secular overtones.

Shakha members marching aggressively on the roads in their khaki gear with sticks in hands, shouting ‘Bharat Mata ki Jai’, is also a common sight in Noida over the weekends.

These visuals are a disturbing assertion of a resurrection of the RSS and the Bajrang Dal, and an indicator of how in the last few years militant Hinduism has grown roots in India.

Today shakhas have mushroomed in some of the newer and upscale sectors in Noida. A messaging group on Telegram that includes nine sectors of this glitzy town has 1.1 k members and has been key in mobilising volunteers for the RSS’s recently held rally in Meerut in February. 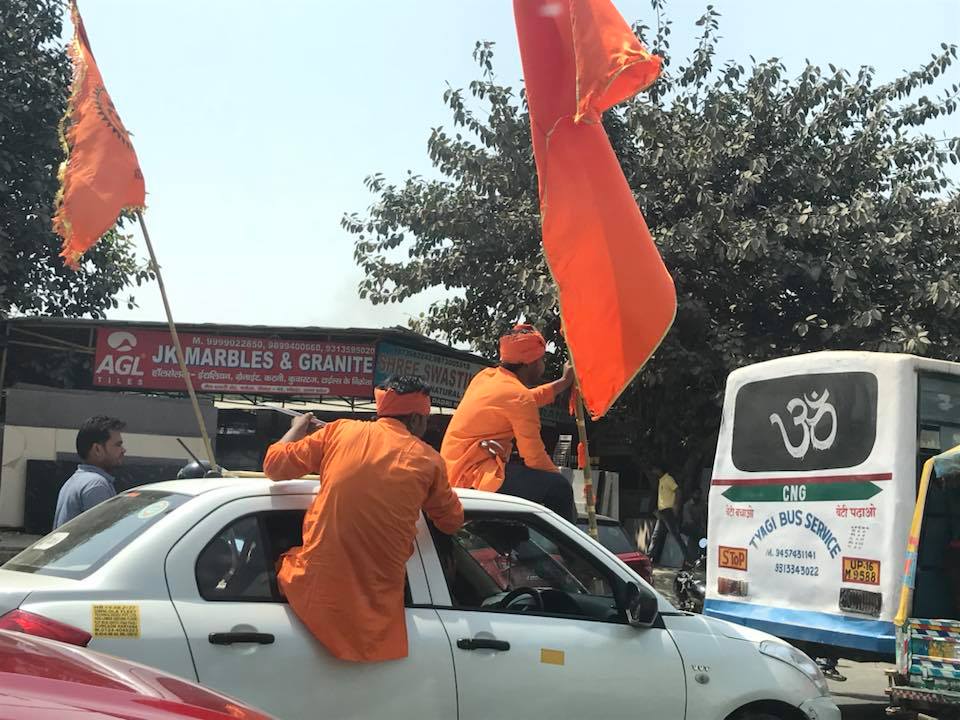 “We are happy to announce that more than 400 swayamsevaks from sector 74 to 79 are on their way to attend the Meerut rally,” a message on the group says, adding that out of the three lakh who are expected to attend the rally, 40,000 were from Noida.

These groups are also used to organise various RSS gatherings all over Noida. In one of the messages, the admin boasts that there are shakhas in almost all sectors between 74 and 79 in Noida.

“If you oppose the shakha members, you are opposing the BJP. I was told this in my face,” a resident of Sector 79 tells me on condition of anonymity.

The Hindutva groups are, however, not just targeting upscale apartment complexes in Noida. The proliferation of Hindu extremism can also be seen in an image that has been glaring at us from bikes and autorickshaws and the rear windows of cars for some time now: the transformed face of India’s beloved monkey-god Hanuman.

In car bazaars in Noida, the Hanuman 2.0 stickers gleam in the sun. Designed by a Mangalore-based artist in 2016, Hanuman 2.0 caught on almost immediately. The artist himself was taken aback when the sticker – which he considered only half-finished – first went viral on the streets of Bangalore.

Hanuman 2.0 is not benign. The smile on his face has been replaced with strong frown lines. He radiates mean energy against a black and saffron background. His thunderous expression spells danger, and makes it clear he is no longer a server but a destroyer.

The Bajrang Dal was quick to co-opt this image. It appeared on its flags in rallies. And on the cover for its new theme song – a catchy, modern tune – Hanuman is depicted as aggressive, indomitable, single-mindedly slaying his enemies.

The sticker has caught on like wildfire in Noida, where it adorns almost every second or third car. The reason for this popularity lies in this town’s demography. It is common to see young men joyriding on their bikes or swanky SUVs, or dancing to DJ music in trucks in the middle of the road. Locally known as Gujjar boys, they sit on the pile of money their parents made from land acquisition. Their days are spent body building in gymnasiums or akharas. The machismo of Lord Hanuman is a huge influencer in their lives. They are more aggressive, they want more power and influence, they want to flex their muscles and be counted. They have the most expensive smartphones, designer clothes, swanky cars, and more money than they know what to do with.What they do not have is proper education.

The Bajrang Dal has reincarnated a new version of Hanuman to reach out to this youth brigade; to give them a Hindu icon to be proud of, a more aggressive version of the god they already revere. The new iconography in turn helps the Dal resurrect its own relevance – on the wane since after it burst onto India’s communalscape following the demolition of the Babri Masjid in 1992 and despite its campaigns against Valentine’s Day and so-called ‘Love Jihad’.

Noida is the new India. And the enormous success of Hindutva groups here is a warning that we will do well to pay heed to. And soon.