Fact Check: Over 389 People Have Died in Communal Riots in the Last Four Years

Mukhtar Abbas Naqvi, Union minister for minority affairs, had remarked that there have been 'no big communal riots' in India over the past four years, 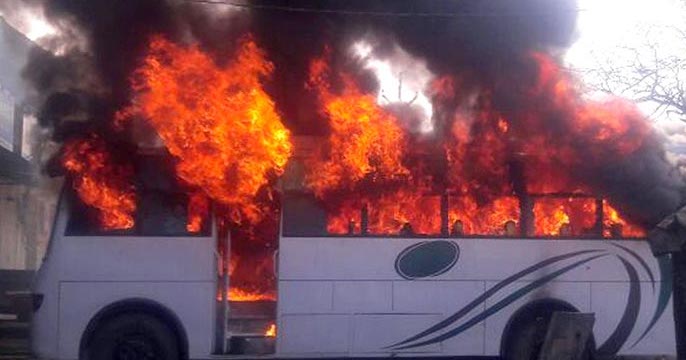 Kasganj: A view of a bus burnt by an irate mob as two communities clashed in Kasganj district of Uttar Pradesh on Jan 27, 2018. Credit: IANS

Mumbai: There have been “no big communal riots” in India over the past four years, Mukhtar Abbas Naqvi, Union minister for minority affairs, said on July 2, 2018.

Naqvi’s claim is not true, according to FactChecker’s analysis of government data. Here’s what we found:

A “major” communal incident is one that results in more than five deaths or leaves over ten people injured. An incident that results in one death or ten injured is termed “important or significant”.

Uttar Pradesh –India’s most populous state reported the most incidents (645) over the last four years, followed by the ninth-most populous Karnataka (379), and second-most populous Maharashtra (316). The home ministry’s reply to the Lok Sabha on February 6, 2018, did not specify the sections of the Indian Penal Code (IPC) used to report these incidents.

“The incidents are reported to be attributed to religious factors, land and property disputes, gender related offences, social media related issues and other miscellaneous issues,” another reply to the Rajya Sabha (parliament’s upper house) on March 14, 2018, said.

The National Crime Records Bureau (NCRB), a division of the home ministry, collects and maintains nationwide crime records. Riots are registered under Section 147 to 151 of the IPC, while cases relating to “promoting enmity on ground of religion race and place of birth” are reported under Section 153A of the IPC.

This article was originally published by Factchecker.in